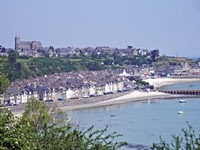 We had a lazy morn

ing before heading over to the island by crossing the causeway on foot. The causeway was put in place about 100 years ago, and the resulting disruption of the tides along with years of sediment shifting has caused a buildup of sediment and the tides rarely come around the island now. Instead, it sits amidst large expanses of mud and you see tourists walking out on it for a mile.

An engineering project will replace the causeway with a pedestrian only bridge and work to restore the marine environment over the coming years.The sheep graze on the marsh land which is salty because of the tides coming in and out, so their meat has a distinctive flavor.

Once on the island we were bombarded with tourists and made a beeline for the abbey itself, intent on doing the full audio tour and gaining some understanding of why the monk who built this was so inclined.

After the tour we ducked into the famous Mere Poulard restaurant for the more famous fluffy omelets made over an open flame to this day. Talk about a tourist trap, two omelets with home fried potatoes and a couple of pieces of bacon set us back about $130!

After just 2 hours visiting Mont Saint Michel we wanted nothing more than to escape this tourist trap, so jumped in our car and decided to take advantage of the gorgeous day and drive along the coast of Brittany. The gorgeous resort town of Concale looks across the bay at Mont Saint Michel, and Pointe Grouin was stunningly beautiful.

St. Malo, a huge city on the coast, was a disappointment so we kept driving on through the town to Dinnard which is a lazy beach town. We hung out at a beach side cafe (even though the temperature was 15 degrees cooler than in Normandy just 30 minutes away!) and indulged in a crepe buerre sucre (I had even managed to learn the French to order it by this point in the trip!
Back at the hotel, we again decide to stay close to home and dined with this spectacular sunset

over Mont Saint Michel.
Smoked salmon with avocado
Â
Roast chicken with potato gratin
Â
Yet another green apple sorbet with Calvados so my husband could try it!