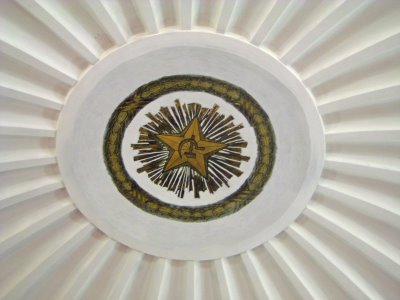 We began our day very early with a quick breakfast before heading to the airport to fly to Moscow for a day trip. The flight was uneventful, although interesting because the plane seemed like a 50 year old cargo plane. It had no above seat lighting or air controls and was easily 15 feet high in the cabin. After landing and a not-so-short bus ride to get into downtown Moscow, we had a quick coffee and snack in a hotel before heading off to the world-famous subway system for a ride merely to see the gorgeous art. 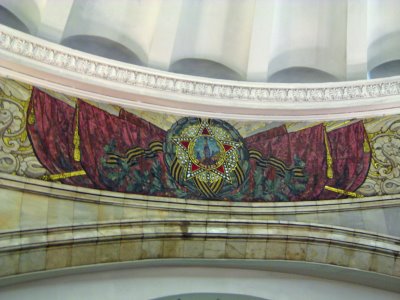 Once we came out of the subway we boarded the bus to head to the Kremlin for a private tour, passing the ominous looking former KGB building on the way. Moscow is a huge city, filled with enormous apartment buildings that spread for miles, and the traffic is horrible. 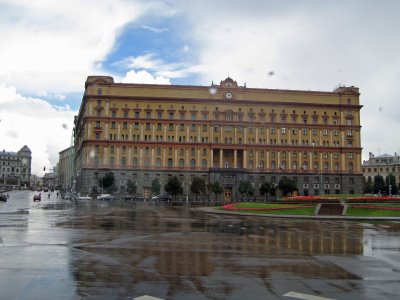 When we arrived at the Kremlin, the weather cooperated long enough for us to capture some fabulous photos of the gold onion domes, including this zoom shot of the Ivan the Great Bell Tower and the multiple clustered domes on the Kremlin building, immediately behind the Church of the Deposition of the Robe (named after a Byzantine feast day). Funny side note: our tour guide in St. Petersburg had a funny but understandable way of describing who was named “great” or “terrible” and why though some of the Romanovs were “good” or “ok” they never were really great. 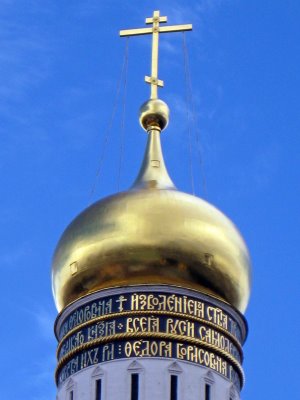 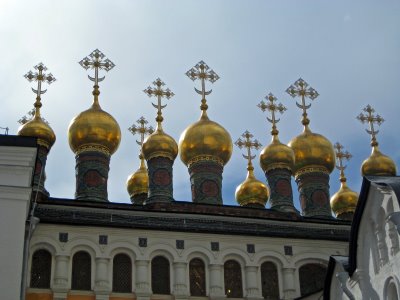 After a very fascinating private tour inside the Kremlin (where we were struck by how the tour guide would never say a negative word about any government decision), including the rooms where the president meets today and where the G8 summit is held as well as through the very pretty Church of the Assumption, we left the Kremlin and headed for Red Square, anchored on one end by the ornate St. Basil’s Cathedral, commissioned by Ivan the Terrible. Wonder why he’s called that? Well, according to legend, he was so taken with the design of this cathedral that he had the architect blinded so that we could never design anything so incredible again. Just one example… 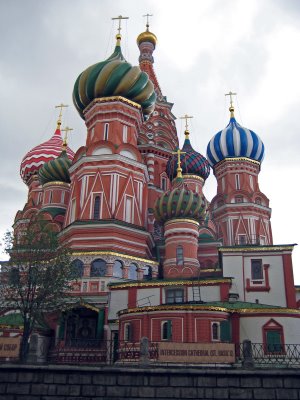 After our Red Square tour, which also included Lenin’s tomb, the very red Historical Museum, and the Gum department store (makes the malls here almost look small!), we headed to a dinner at the exclusive private writers’ club. Our meal began, of course, with a shot of vodka. One sip was all I needed to know it could kill you and I switched to red wine! The first course was a traditional buckwheat blini with caviar, sour cream, and dill. 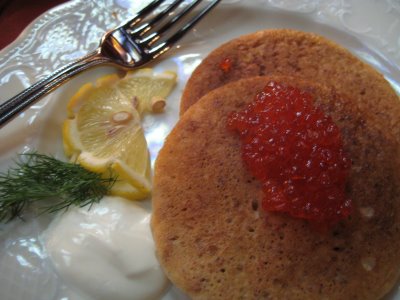 A mixed salad followed the caviar… 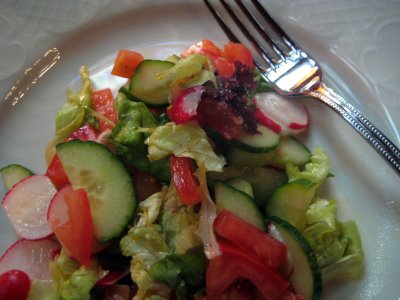 and then a traditional beef stroganoff served with fried potatoes and some very unusual little pickles. 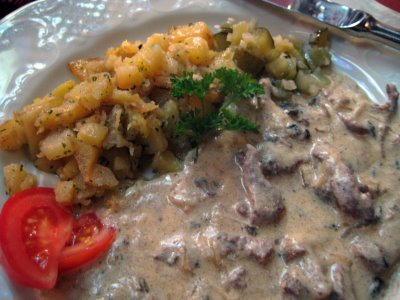 Dessert was a simple strawberry ice cream which I’m not sure is traditional Russian or not, but was a nice ending to the meal before boarding the bus at 8 pm to head back to the airport. Our drive was only 30 km, but took us nearly 2 hours with the Moscow traffic, passing by one after another large apartment building.

When we arrived back to the ship at 1:15 in the morning, we were completely charged up from the trip, so the plate full of snacks the ship had left in our room was greatly appreciated! 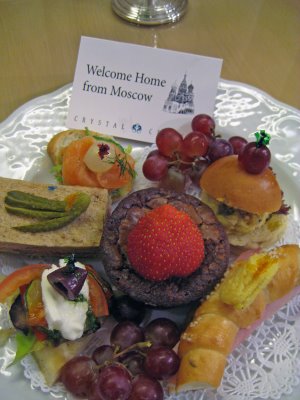