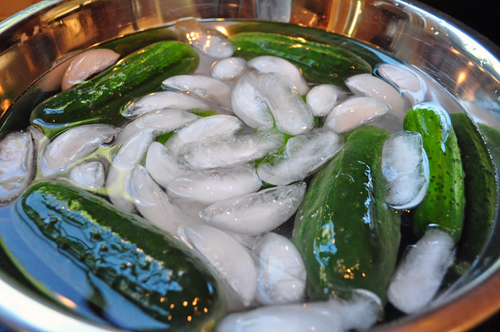 I get into a bit of a frenzy this time of year. The produce from my CSA farm and my own garden starts rolling in faster than I can clean and cook it, and I panic, feeling guilty that I might have to throw perfectly good food away because it rots from neglect. I decided to get on top of things early with these cute little pickling cucumbers, but since I’m a lazy food preservationist, I opted for refrigerator pickles over traditional canning. After a simple soak in ice water for several hours… 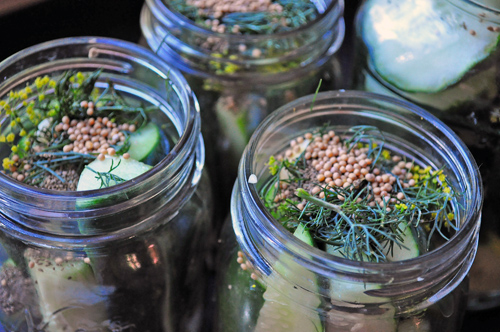 …I sliced them up and put them into their jars along with garlic, dill and spices. 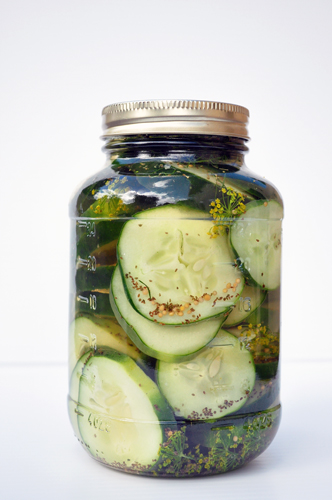 Then I covered them with a salt water and vinegar mix, popped the lids on, and put them in the refrigerator to do their thing for a couple of weeks. 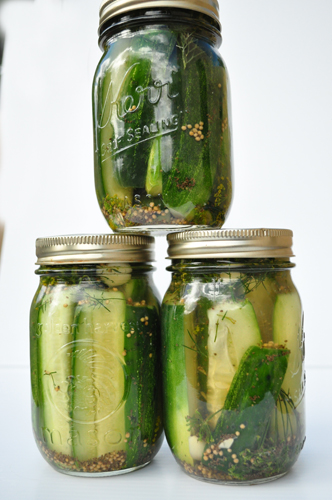 Pickles made this way don’t last as long, but that will be incentive for me to eat them up before the hot weather leaves us. Now what to do with all that zucchini and round 3 of Swiss chard that’s ready to harvest?!

Soak cucumbers in ice water in the refrigerator for 2-6 hours. Remove from ice bath and slice lengthwise. Place a dill seed head in a sterilized pint jar and add half a clove of garlic. Pack cucumber slices into the jar then top with second seed head, minced dill, celery seed, mustard seed, and second half garlic clove. Heat vinegars, water and salt together just until salt dissolves, then pour over cucumbers. Seal tightly with a lid and refrigerate 7-10 days before eating. Pickles will last up to a month in the refrigerator but are NOT shelf stable.