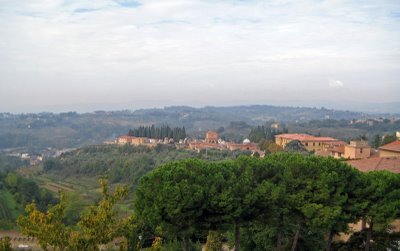 One of the great things about returning to a city is that you don’t feel compelled to get up at the crack of dawn to see every last inch of it. Instead, we slept in until past 10:30 while the others toured around Siena, then took our time getting ready, grabbed an espresso macchiato con un po’ di latte at the bar across from the hotel (tip: buy your coffee standing up at the bar and it’s only 1 euro), then headed into town to meet up with our friends. 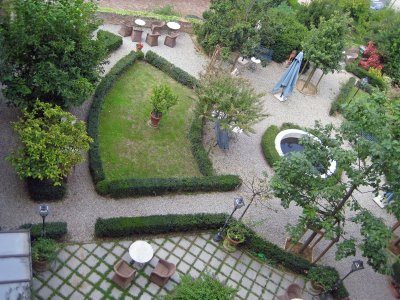 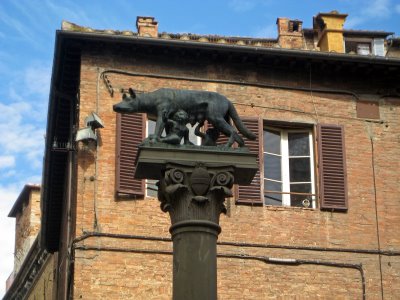 It’s fascinating to see that even in the fall, Tuscan store fronts seem to burst with incredible fresh produce. 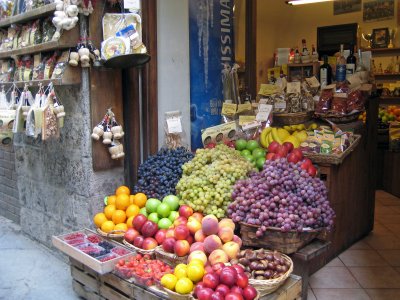 And I managed to snap this head shot of a wild boar, only the first of MANY we would see on this trip. 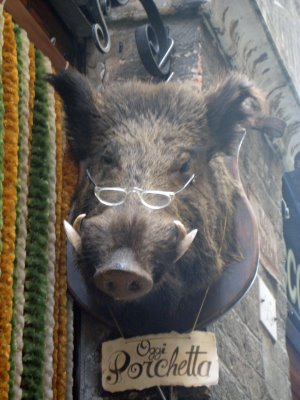 We finally wandered into the Piazzo del Campo and grabbed a table right on the piazza to hold a spot for our gang to meet up for lunch. As in previous attempts to gain the favor of the waiter, we found him initially cool to us, but quite happy later when he saw just how much food and wine we could manage to order for one meal. 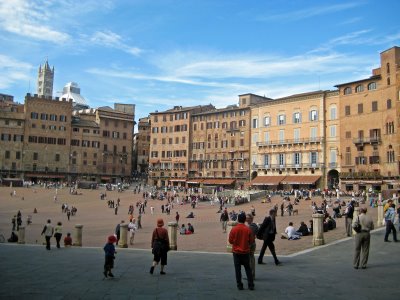 As they say, “When in Rome…”, but when in Tuscany, one of the best white wines, which happens to be perfect with a light pizza at lunch, is the Vernaccia di San Gimignano. 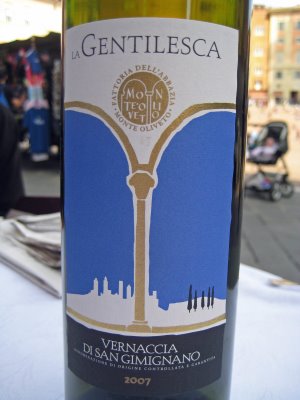 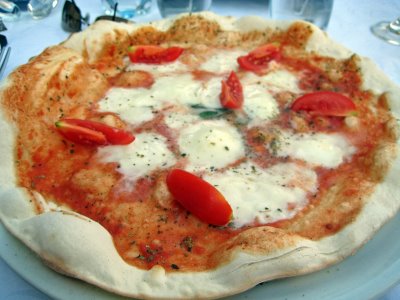 It happens to pair equally well with the gnocchi with pesto. 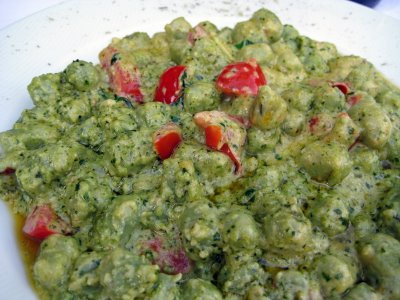 While dining, Rob managed to strike his most metro sexual pose as he picked out this scarf for his wife. 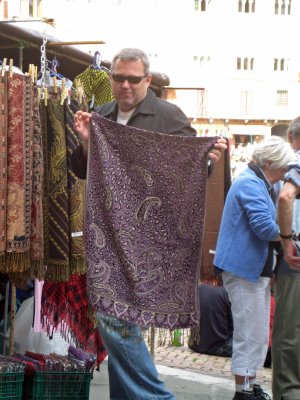 Our afternoons had taken on a special ritual at this point in our trip: the 3pm post wine lunch need of caffeine to make it through the day. I love this shot of the group, espresso in one hand, gelato in the other, building up our strength for the rest of the day. 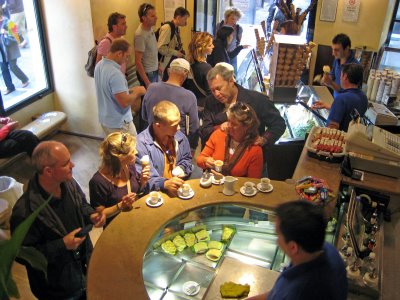 We wandered through the streets of Siena… 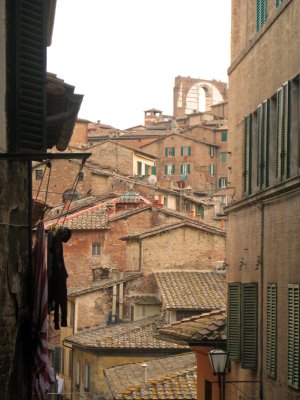 gazing at the lovely tiled rooftops… 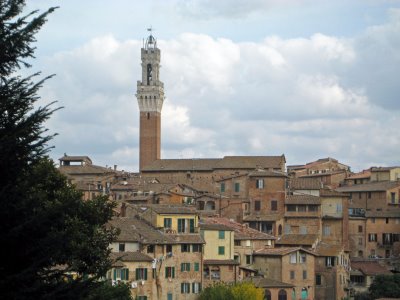 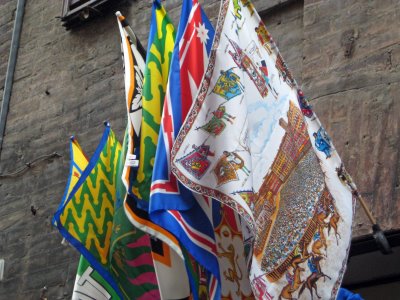 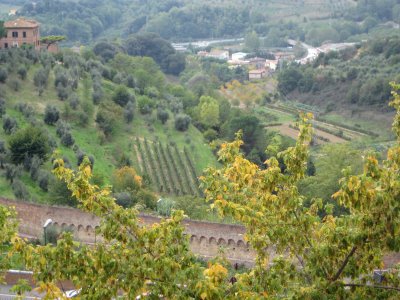 and returned to the impressive view of the Tuscan countryside from the back courtyard of the hotel. 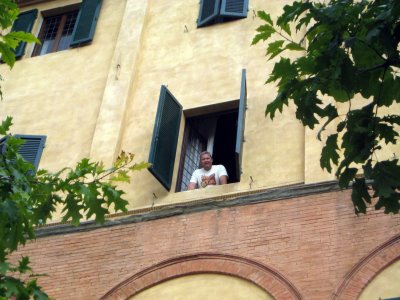 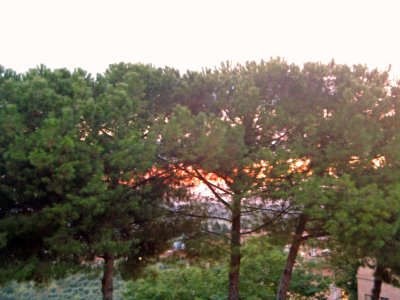 then made our way into town to try to grab a table at Boccon del Prete, the place where, we later found out, Tom Hanks had dined when he was here for the Palio last summer. (The owner confided that Hanks was “molto simpatico – would you guess anything else?) 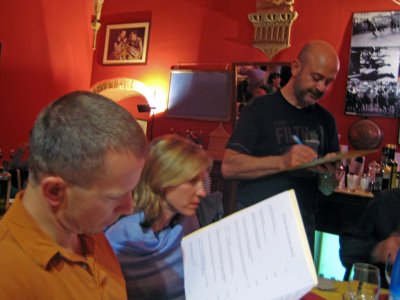 I have to think there was something about my attempt at Italian along with our willingness to squeeze 6 people into a table clearly meant for 4 right in the draft of the front door that endeared us to the owner. Whatever the reason, we once again developed a great rapport, and settled in for a meal like no other. 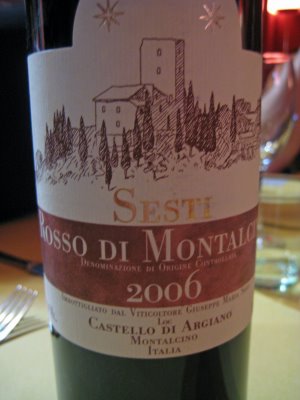 Having traveled through Montepluciano on our way to Montalcino and Siena the day before, we felt compelled to try to the classic wine of the region. 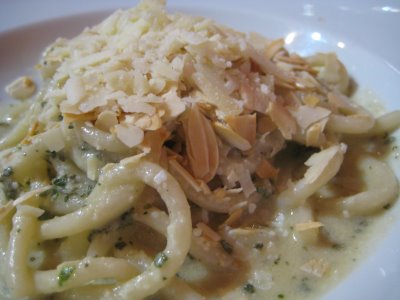 It paired wonderfully with one of the classic pasta dishes of the region, Pici (a fat spaghetti) with Almond Sage Cream. 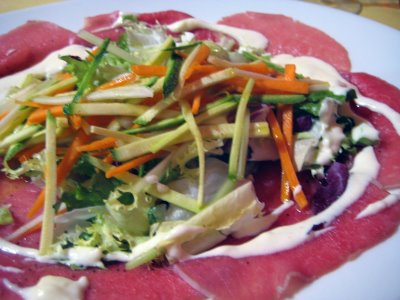 I followed this with the Carpaccio di Manzo, and finally a Semifreddo con Panforte. 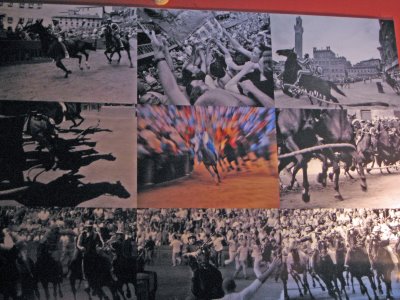 And needless to say, the meal was accompanied by lots of wine, and culminated with my favorite, limoncello. 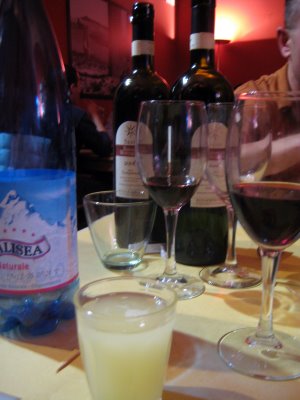 We managed to get to bed fairly early – we were schedule for touring Chianti the next day!