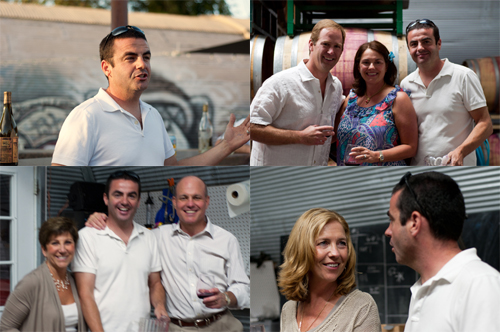 Did you ever bid on something at a silent auction, not really knowing what it would be like, only to be disappointed later? This story is the opposite of that. I purchased a wine lab with barrel tasting for 10 people from The Infinite Monkey Theorem winery, and all I can say is wow – what a great night we had! 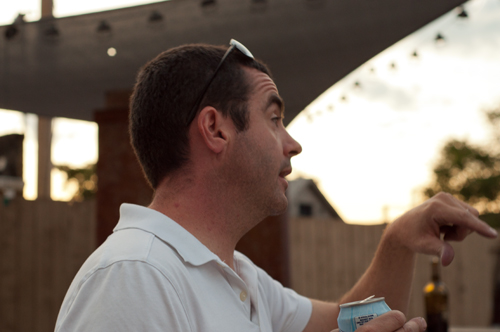 The Infinite Monkey Theorem winery is the brainchild of this guy, Ben Parsons. He’s been in the business of making wine for some time – including time spent in Europe and down under and five years at Canyon Wind here in Colorado. But this latest venture, which began in 2008, is just totally cool. 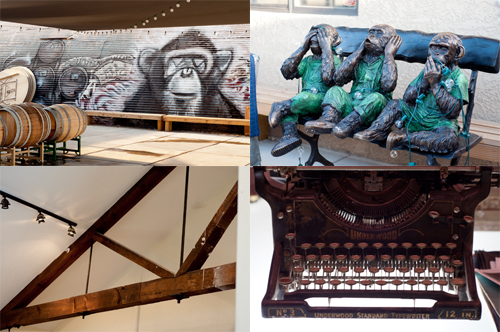 So why the weird name? Well, lots of wines have catchy names (Marilyn Merlot anyone? How about the Middle Sister wines?) and there are plenty of people who actually pick up a wine because of a cute name or pretty bottle. But while it grabs your attention, there’s actually a lot behind that name. As Ben says:

“The Infinite Monkey Theorem states that a monkey striking the keys of a typewriter at random for an infinite amount of time will almost surely type the complete works of Shakespeare. On its face, the name seems to be a simple irony compared to the incredibly controlled process of premier wine making. What The Infinite Monkey Theorem is really saying is the concept of infinity, while massive and incomprehensible, provides order for an otherwise chaotic system.

This is what our winery accomplishes in its gritty urban setting. From an alleyway on Santa Fe, we produce the finest wines in Colorado. We are the Shakespeare, not the monkey. Think about it.” 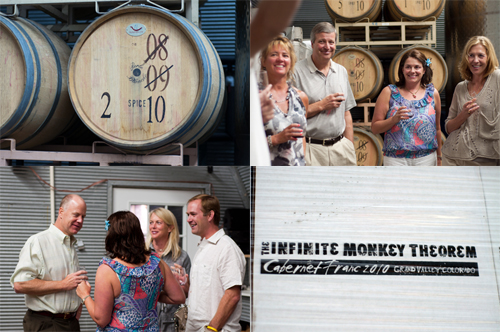 We spent 90 minutes with Ben last night and I love this guy. He’s passionate, he’s engaging, and he knows wine. And I love that he took over a weird old quonset hut left from the war on Santa Fe to house his venture. 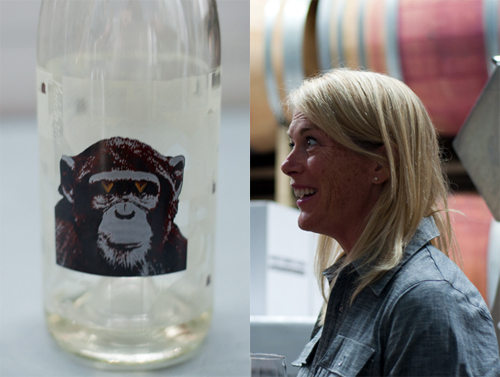 He is working with an album artist to design and silkscreen his bottles – really pretty, and no messy soggy label if you put the white into ice water to chill. 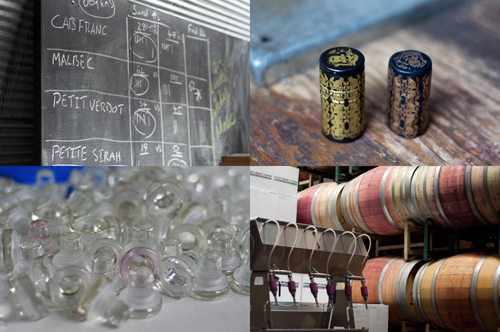 He’s using alternative corks like screw tops and these glass stoppers with a vino seal. It’s kind of cool because the glass “cork” can be used as a paperweight – you might have even seen restaurants use them to hold down the check when they present it to a client. 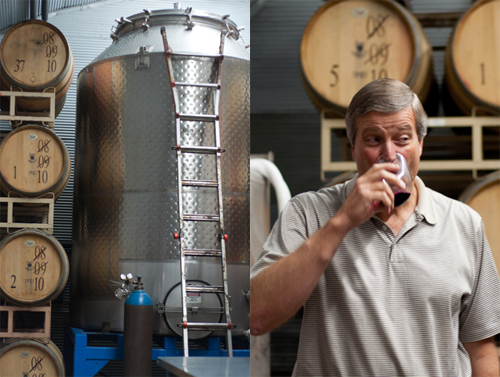 Ben moved us through their facility, explaining his wine making process (which is incredibly manual at this point) and his wine making style. As we went, we tasted about 10 different wines, including some directly from the barrel. 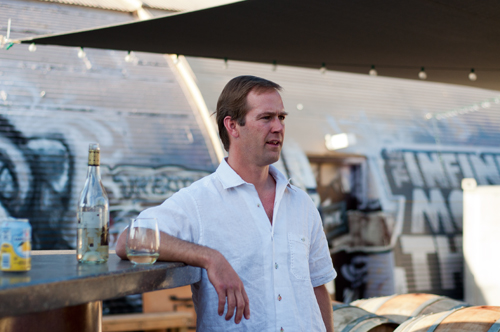 Everyone was engaged – Ben has a way of just drawing you in to his world of wine – and our time with him just flew by. 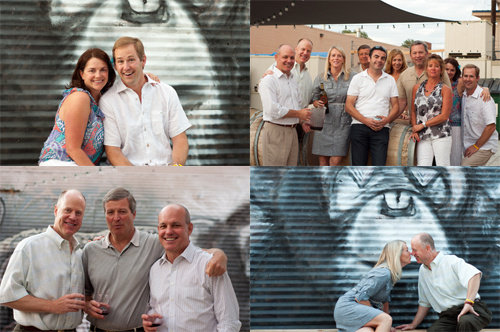 The evening was a casual affair, with time for chatting and taking photos, as we leisurely sipped some great wines. Favorites of the group included a nice crisp Verdejo that we started the evening with, The Blind Watchmaker (a blend of Barberra, Syrah, and Cabernet Franc), and the Petite Sirah, which Ben accurately describes as “a goliath” of a wine. It was big and bold and I think most people’s favorite of the evening. You can buy The Infinite Monkey Theorem wines online and at a variety of retail outlets in Colorado. 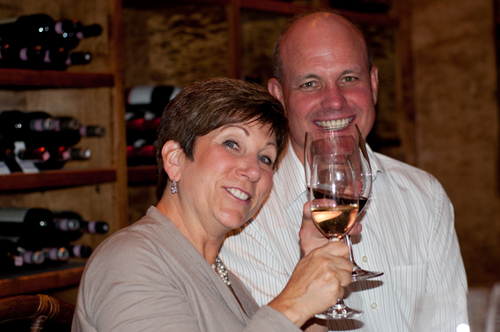 After our tasting lab with Ben, we headed over for dinner at Barolo Grill – I hadn’t been there in awhile, and had kind of forgotten how great the food is there. We had the private room in the back in the wine cellar and thoroughly enjoyed the food and the fun. 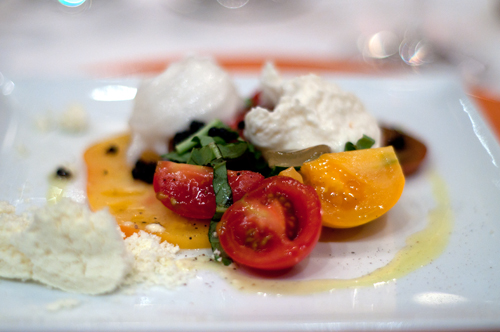 An heirloom tomato caprese salad made with burrata – life doesn’t get much better than this! 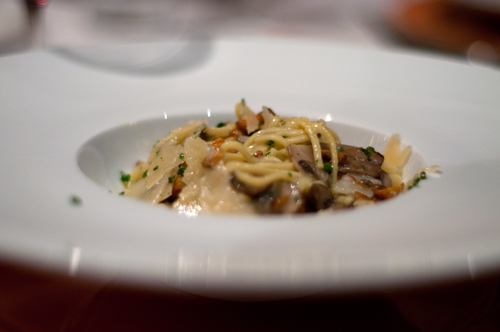 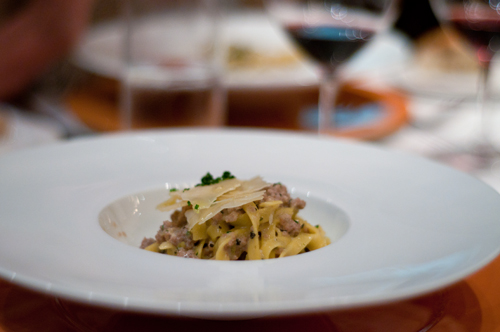 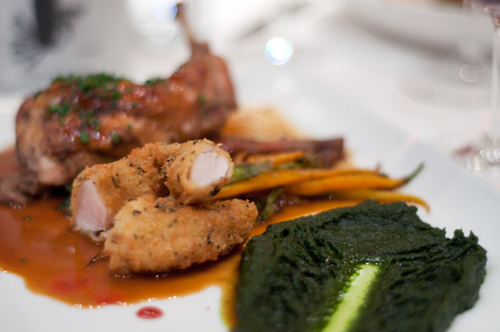 Rabbit loin and leg with a silky kale puree. 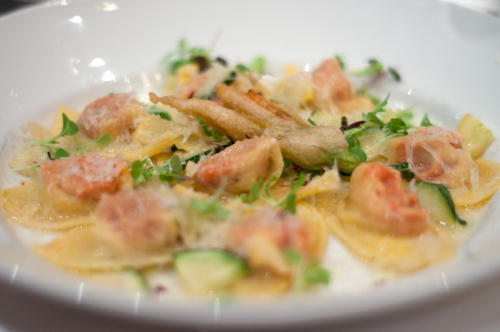 Seafood stuffed agnolotti. Thanks, Ben, for the great time spent with you, and thanks, Blair, for the great meal that followed. Like I said, what a great night we had!