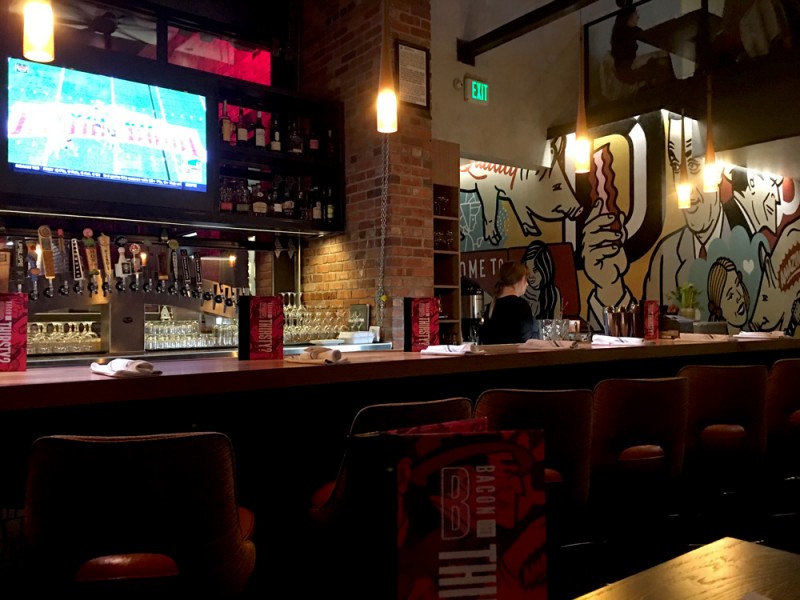 It may seem odd to you, at the start of a new year when most people are trying to trim the calories, eat out less, diet and lose a few pounds, I become obsessed with trying out new restaurants in Denver. I think each year, my year gets away from me and now I enter January not with a resolution to lose five pounds (well really I should lose ten), but rather to hit my ever growing list of restaurants and chefs I want to experience. I’m doing pretty well so far, with 4 from my “new” list plus a revisit to Rioja already under my belt in January. So let’s get started – first up, Bacon Social House. 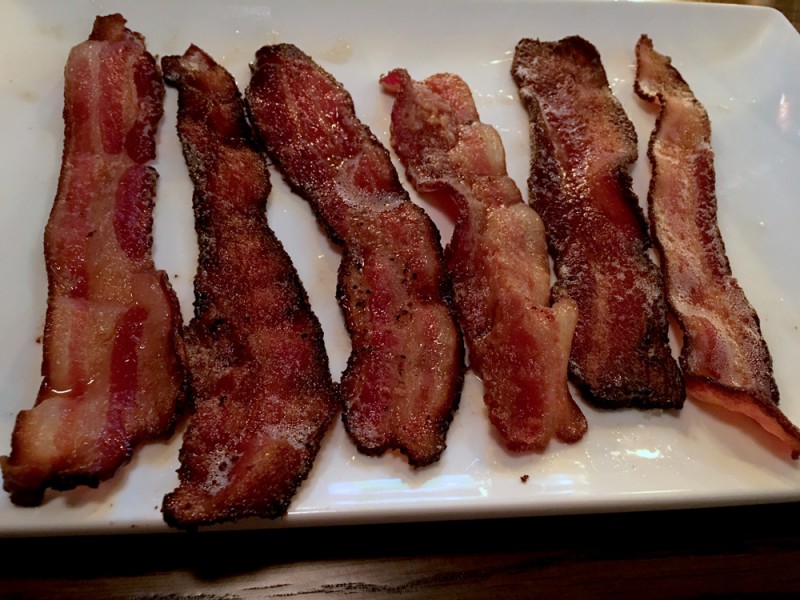 In the ever expanding and rejuvenating neighborhood of the Highlands in NW Denver, there are no shortages of places to eat. Which is why I guess this place decided to go with the bacon theme as an extra draw. If you go, I guess you must try the bacon flight appetizer, so we did: Applewood, Candied, Chef’s Choice, Garlic, Habanero, and Paleo which I guess is just straight up meat. We said we’d just sample them – we actually ate every morsel. Just warning you. 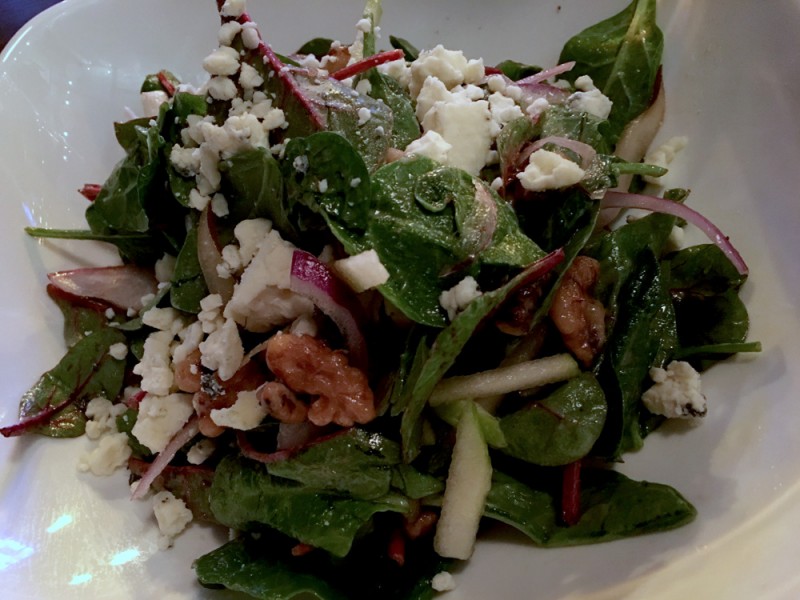 We shared the house salad, which isn’t really described on the menu, but turns out is quite large and quite rich, filled with cheese, bacon, nuts, apples, and other goodies. In hindsight, we could have used some simple greens after the bacon flight. 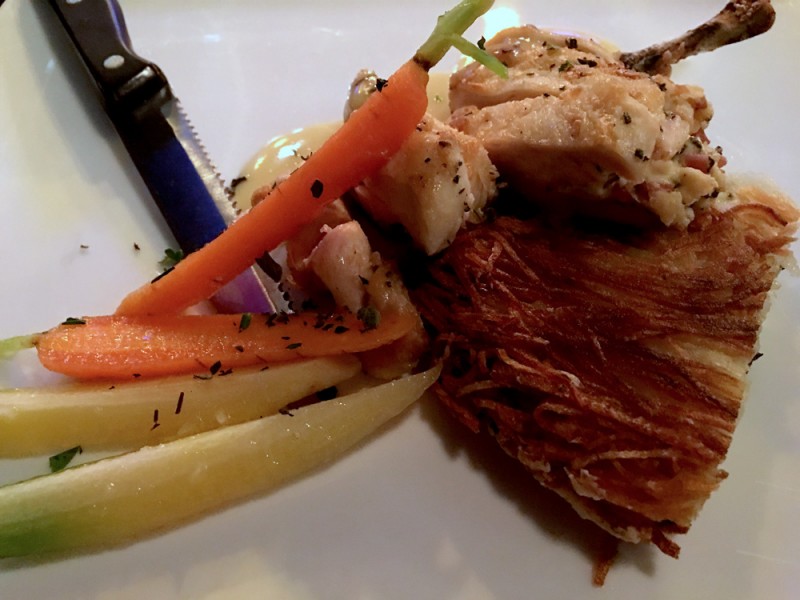 I was completely relieved when my entree of an airline chicken breast (with the drumstick part of the wing still attached) with prosciutto, sage, gouda, potato rösti, glazed baby carrots and lemon butter arrived and was a quite small portion. Had I knot had anything prior to this, I think I would probably have left hungry. But it was perfect after a filling appetizer and salad. 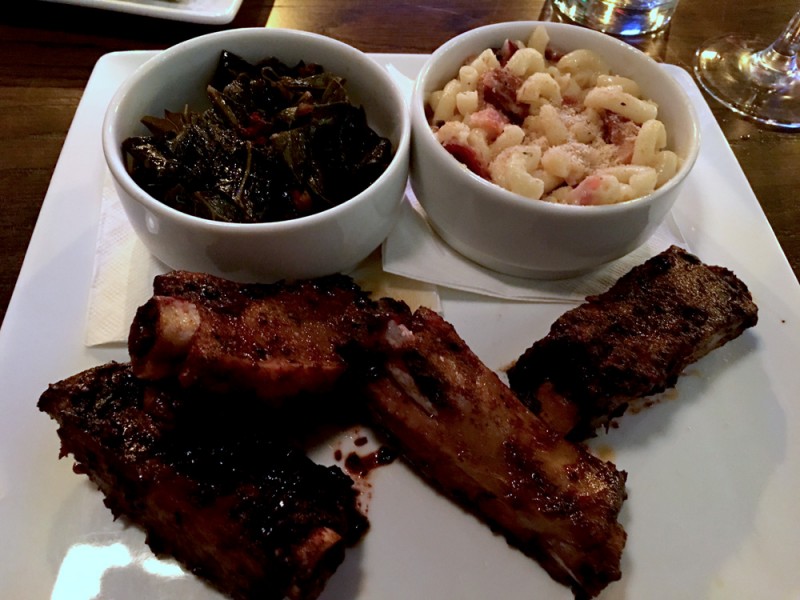 My husband’s entree of the BBQ ribs (in blueberry-chipotle bbq) with bacon mac n cheese and collard greens was the opposite – it was large, it was rich, and it was filling – and frankly it was too much food after the bacon and the rich salad. If you try out Bacon Social House, make sure to ask about portion sizes of everything you are ordering so that your meal ends up making sense to you. 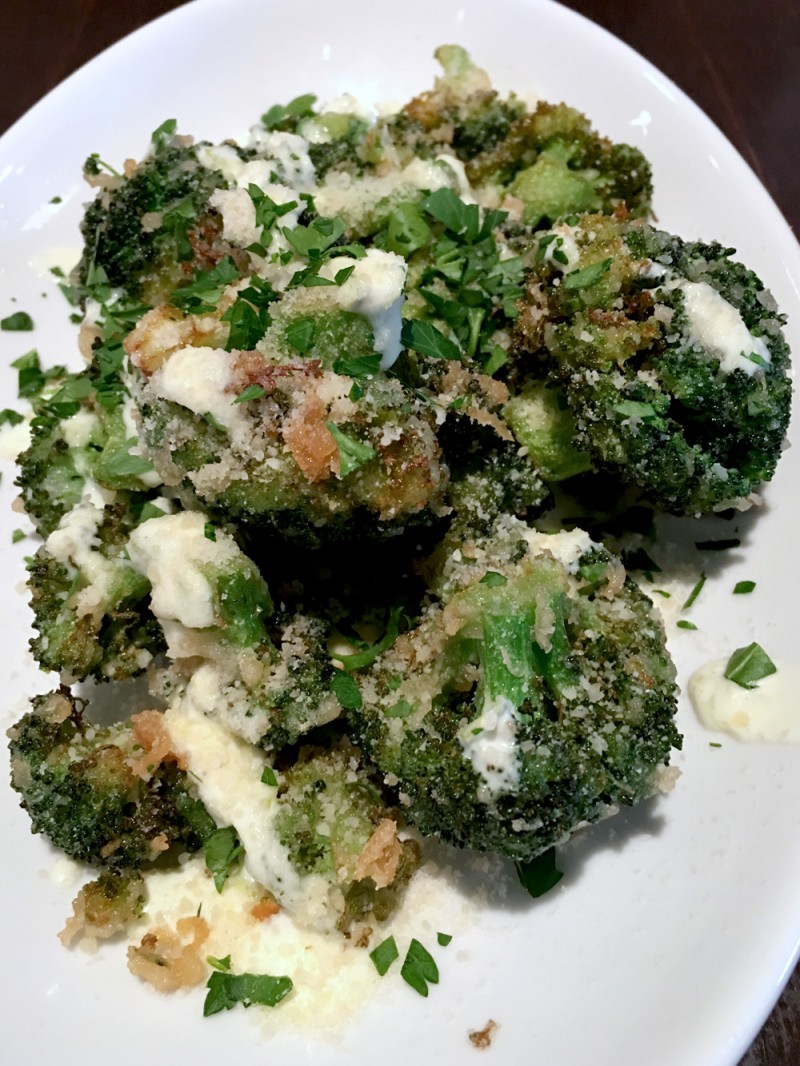 Humboldt Farm Fish Wine is one of those places that wasn’t even on my list last year, but skyrocketed to the top based on reviews I read. They occupy the space formerly held by Strings, and it’s lovely. This broccoli appetizer, very, very lightly tempura battered, flash fried at very high heat for 90 seconds, then served with pepperoncini aioli and grated grana padano cheese was absolutely the highlight of lunch. I’ve tired of seeing crispy Brussels sprouts on every restaurant appetizer menu, and this was a welcome change. I could have just ordered another plate of this and skipped everything else! 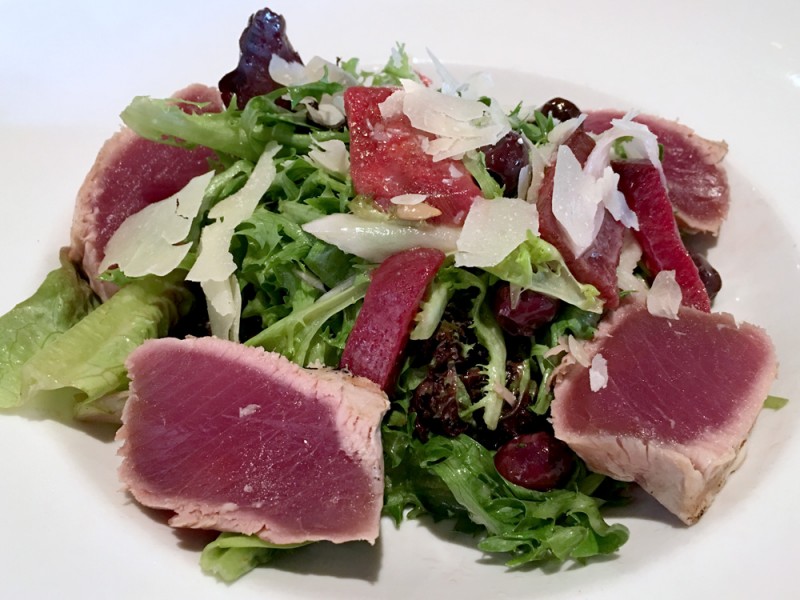 For some reason, all 3 of us in the group ordered a salad topped with fish. The mixed greens with some ahi on top, according to my friend, was just okay. 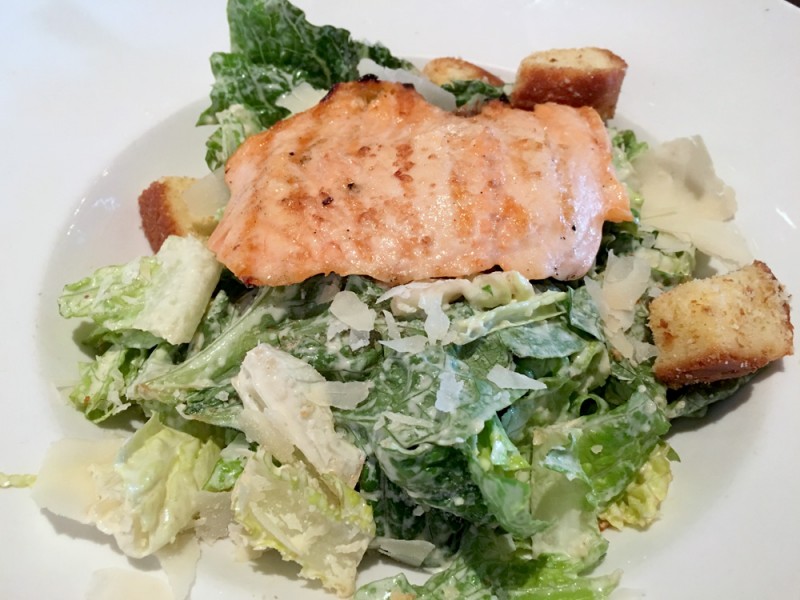 The piece of salmon on my caesar salad was a bit on the small side for me, and in fact, the salads in general I thought were a bit too small to call entree salads. The caesar dressing was great – nice and lemony. 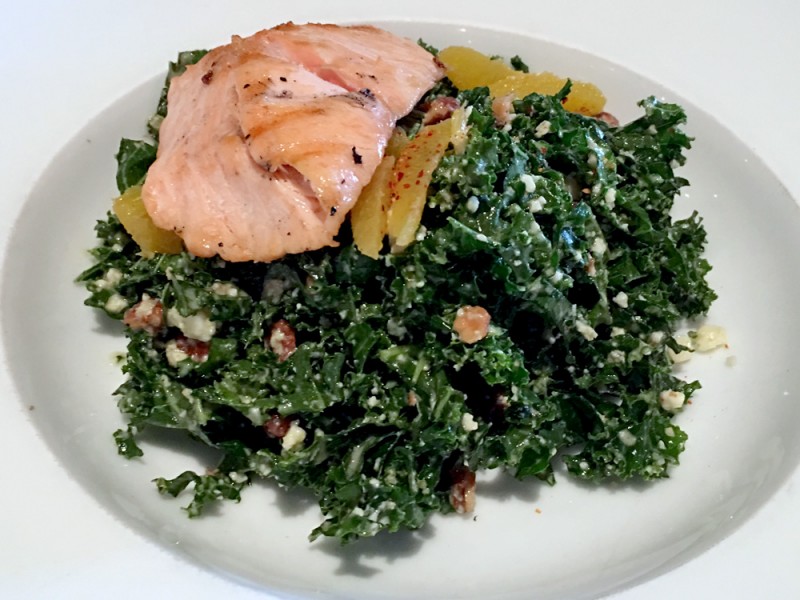 The kale salad, with orange, spiced walnuts, pumpkin seed vinaigrette and cotija cheese, to which my friend added a piece of salmon, was by far the best salad of the meal. 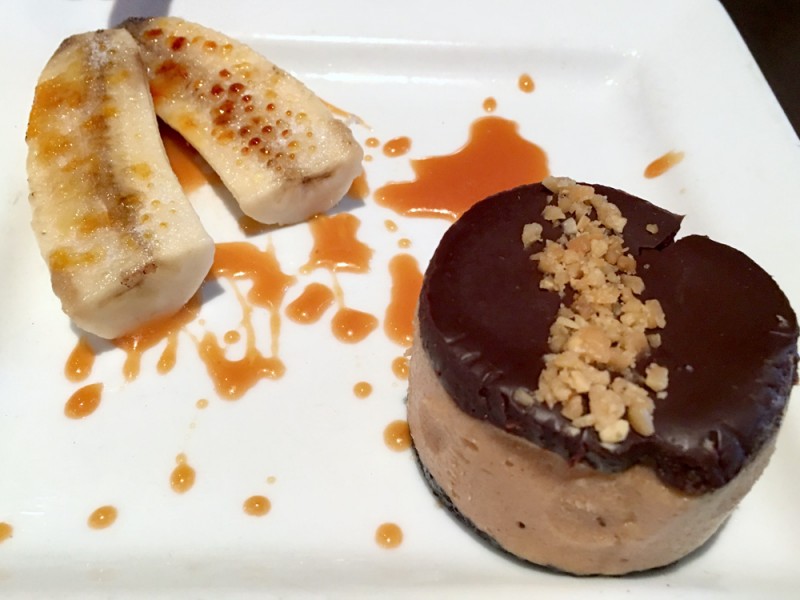 I never go for the desserts, but we were celebrating a birthday, and the other two seemed quite happy with this peanut butter tart served alongside a caramelized banana. I’d like to try Humboldt again for dinner, feeling that somehow I missed out on the “true” menu. 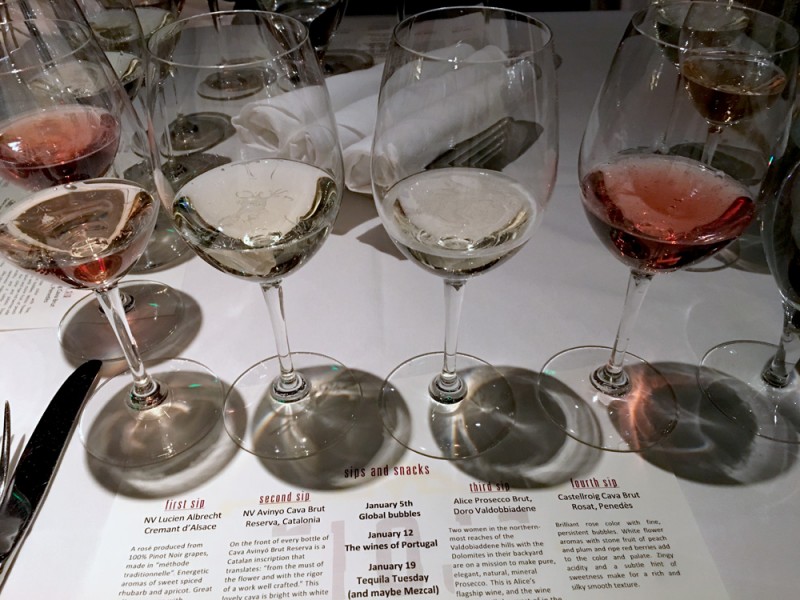 I didn’t intend to have Rioja on my “new” list for 2016, but it’s certainly always on my “must get back to” list. And then I got an email about a Tuesday night special feature called Sips and Snacks: 4 half glasses of a featured beverage – the day we went it was sparkling wine… 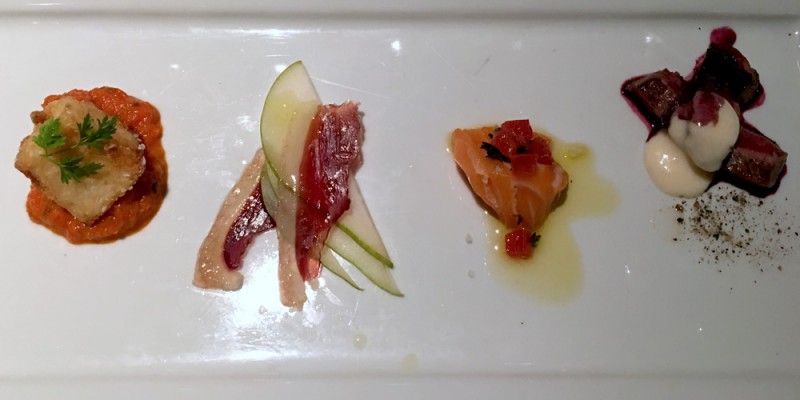 …alongside 3 tapas snacks to pair with them. We learned about some new wines, each morsel was delicious, and it was a fun way to get together with some friends at 5 on a Tuesday. 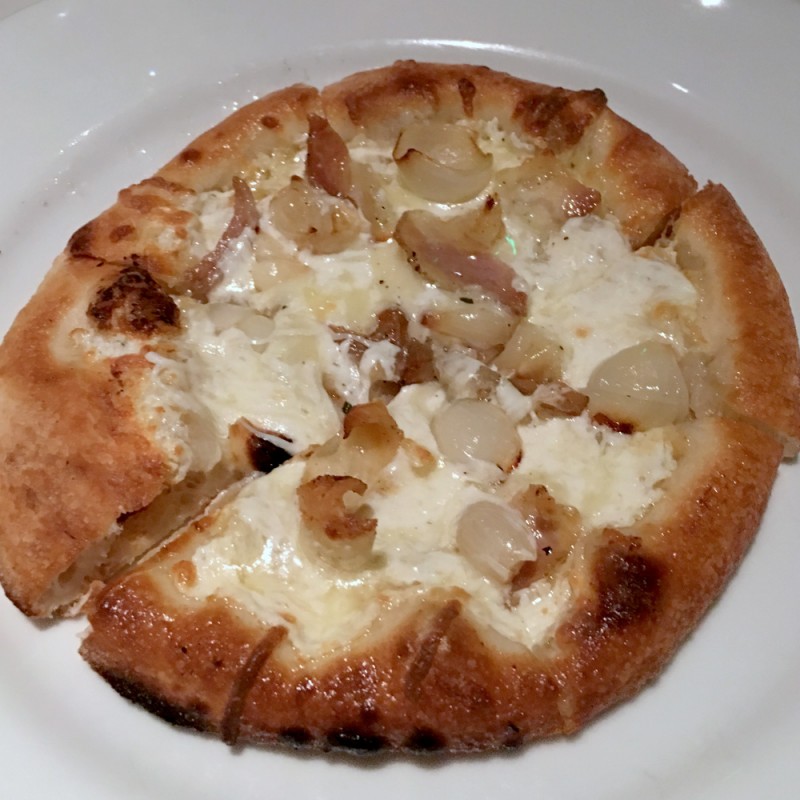 We weren’t really full from that, so ordered the pizza bianco (fontina, house made mozzarella, spring onion, guanciale, garlic-rosemary oil)… 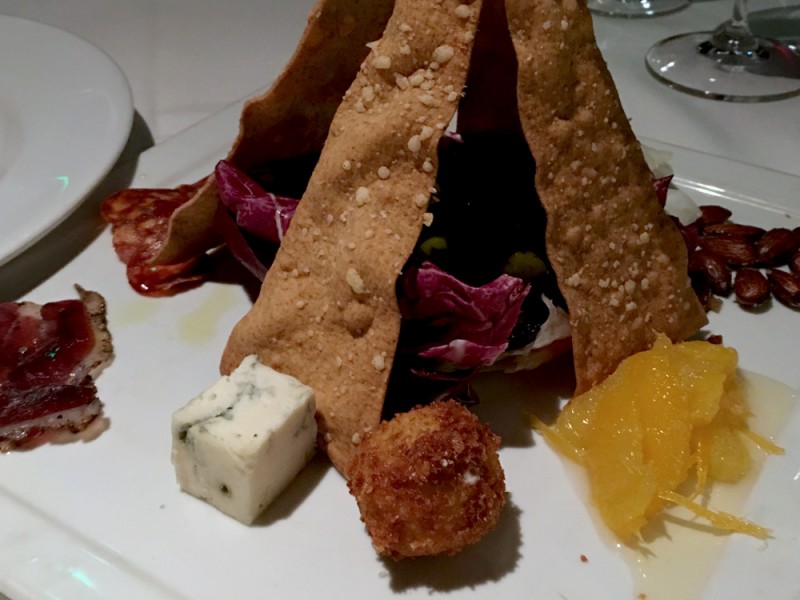