I teach a fun cooking class called What’s For Dinner?, but in reality that class was developed around the way I cook most nights. I usually ask my husband what protein he wants, then start looking for ingredients, and if I’m feeling nice, give him two choices. He picked chicken, and the first thing I found was some of my homemade marinara sauce from last summer’s tomatoes. 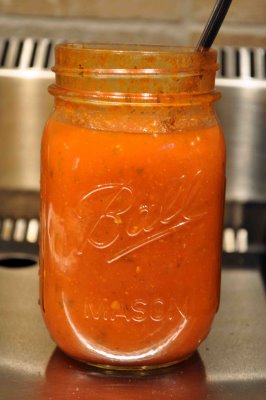 As I was digging around the freezer I found a slice of pancetta (I usually buy it in the deli and have them slice it about a quarter of an inch thick) which I diced small and then fried in a nontstick pan until crisp and all of the fat had rendered out. (NOTE: I know I’m always telling you not to use nonstick as you won’t develop the flavorful brown bits in the pan. But if you aren’t going to use the pan for the next stage of cooking the dish, then that’s irrelevant and frying bacon or pancetta in a nonstick skillet is easier.) 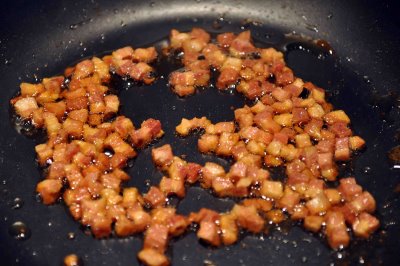 Even though most of the fat was out, I still like to drain fried bacon or pancetta on a paper towel – and usually I sneak several nibbles of it while it’s sitting there. 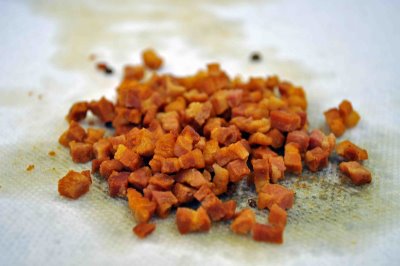 Next I put two boneless chicken breasts into a baking dish and seasoned them liberally with salt, pepper, and ground up red pepper flakes… 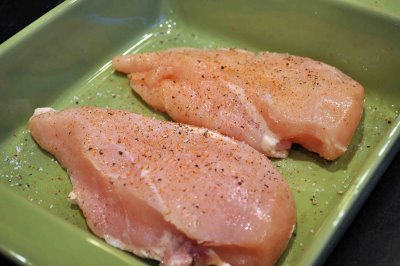 …before pouring the marinara sauce over the top and sprinkling each breast with some of the crispy pancetta. 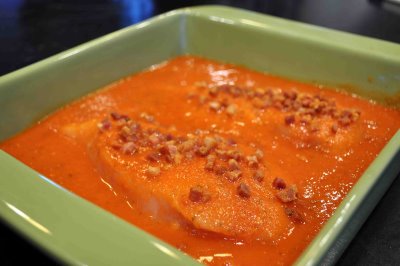 Finally, I topped each breast with a couple of slices of provolone cheese, covered the whole thing with foil, and baked it until the chicken was fully cooked, about 40 minutes. 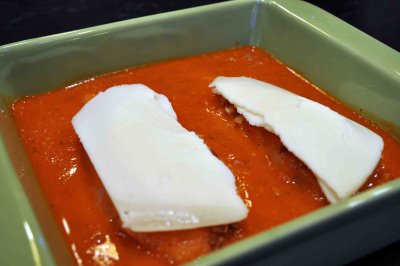 While the chicken was cooking, I boiled a big pot of water to cook some whole wheat spaghetti. One of the Italian tricks is to undercook your pasta, then continue cooking it in the sauce you’re going to serve it in. So I took the chicken out of the baking dish, drained the pasta and put it back in the pot along with the sauce, and let it simmer for another minute or two to absorb the sauce and finish cooking. For extra yumminess I threw in a handful of grated Parmesan cheese. 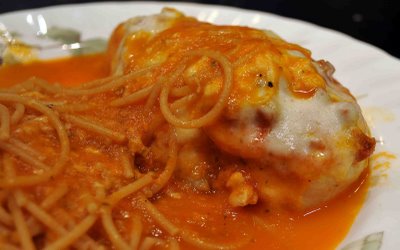 It didn’t really photograph very well – or rather I didn’t have the patience to work on my food styling long enough to get a decent shot – but it sure tasted great!