I’ve been wanting to post this recipe ever since I became a chef educator for Operation Frontline, providing nutrition and cooking lessons on a budget. I just signed up for my 12th class for 2009, so I’ve hit my goal! The recipes that OFL uses are easy, nutritious, and affordable – not to mention mouthwateringly good. Whether you’re on a budget or not, on a diet or not – this is just plain good food for all of us! 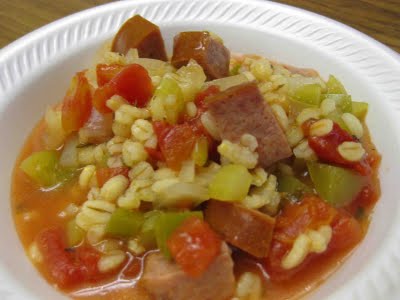 I usually start out the six week series of classes with this Barley Jamabalaya recipe – the participants sometimes have never had barley, are shocked at how good the turkey sausage is, and generally finish up the whole pot of soup. It’s hearty enough for a complete meal, and fast enough to make on a weeknight. You can vary the flavors by switching up the meat – try chicken, shrimp, or a combination – and can make it less spicy (it’s pretty hot!) by decreasing the cayenne. If you have other vegetables in the refrigerator, by all means throw them in too.

Rinse barley under cold water. Combine barley with water and bay leaves in a saucepan and bring to a boil over medium high heat. Reduce to simmer and cook until tender and the water has absorbed, about 45 minutes. Drain excess water and set aside. Heat oil in a large soup pot over medium high heat; add celery, peppers, onions, garlic and turkey ham and saute for 5-10 minutes. Add tomatoes, turn heat to high, and bring to a boil. Stir in pieces, cover reduce heat and simmer for about 15 minutes. Add cooked barley to the soup and more liquid if needed. Cook for an additional 5-10 minutes for flavors to meld. Remove bay leaves and serve.

Notes: If you use quick cooking barley, do not precook it, but rather add the barley and water to the other ingredients and let it simmer together.