I have a confession to make – two nights ago I ate three entire servings of mashed potatoes as a snack after dinner. I felt completely guilty for this stress-induced carb overload until a friend pointed out that perhaps my body was craving potassium. Yea, that’s what my story will be. But it did get me thinking that making the perfect mashed potato is not so easy for everyone. 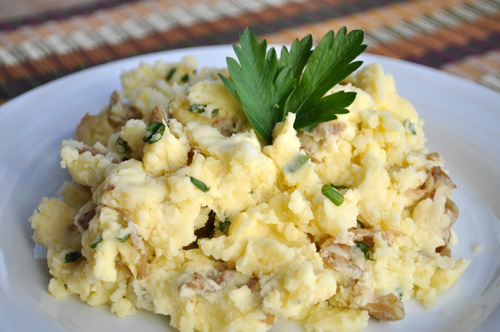 I know what you’re thinking – just how hard can mashed potatoes be that I need a primer on how to make them? Well, it turns out making the perfect mashed potato is actually quite an art that sometimes requires some special equipment.Â Let’s begin with terminology: 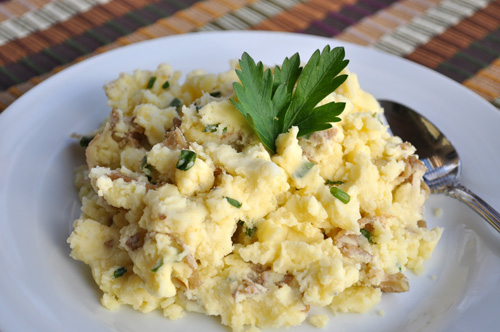 Getting the perfect smashed or mashed potato starts with cooking them properly. In order to boil your potatoes, they need to be cut into even sized pieces. If you have some larger and some smaller, the smaller ones will start melting, literally disintegrating in the water, before the larger ones are cooked through. Drain them when you can pierce the potato easily with the tip of a knife. Let them hang out in the colander or strainer for a minute so that the excess water evaporates so it doesn’t water them down when adding in seasonings.

The most important thing in preparing smashed or mashed potatoes is to be sure you don’tÂ overwork the potatoes – that’s what turns those startch molecules into some sort of gummy substance. Whether making smashed or mashed, I like to melt my butter first so that I can incorporate it easier. For smashed potatoes, simply put the drained potatoes back in the pot and drizzle the melted butter over it (at the Cordon Bleu cooking school in France a chef actually told me the optimal proportion of butter to potato is one to one -Â gotta love theose French chefs!). Sprinkle with sea salt and freshly cracked black pepper and use a hand masher to gently mash the potatoes into pieces and to mix in the butter and seasonings.

For mashed potatoes, you are going to want to use a potato ricer – it gently presses the cooked potatoes through what looks like a giant garlic press so that you have this light and fluffy potato to work with instead of beating them to a gummy death. Then proceed the same to stir in melted butter, salt and pepper – just don’t be overly vigorous when stirring. A few simple strokes with the spoon is all you need!

Here are some variations and additions:

I need to run now – that plate of smashed Yukon Gold potatoes with butter and chives that I photographed for this post is calling me for breakfast!