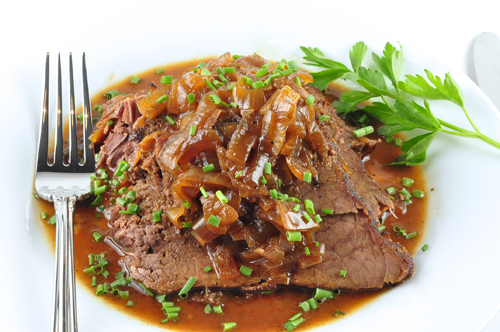 I just ate this for dinner, and man was it good. Beef rump roast (another one of those “lesser” cuts of meat, aka cheaper), slow cooked in my Dutch oven with stock and onions. Mmmmm… 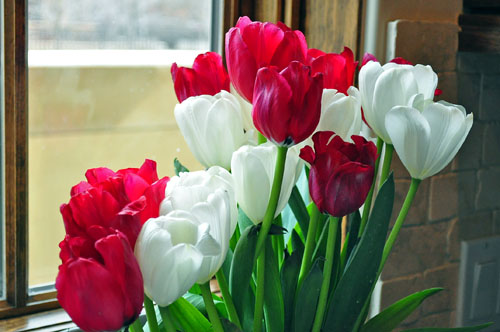 Don’t be fooled by these tulips. It’s still winter in these parts of the world – see that line of snow on the wall outside my kitchen window? And that means it’s still a great time to make slow cooked roasts. We’ll switch to lighter fare when spring rolls around…or I can’t fit into my jeans, whichever comes first! 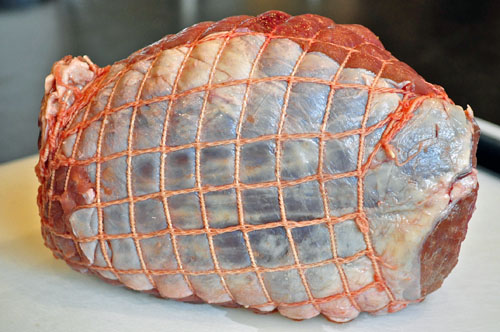 This is a rump roast – it comes tethered in this sort of girdle netting that set my mind off on a tangent for awhile today. Like, if I could wash that and use it would it make my “rump” look better? And I had all sorts of clever titles for this post, like, how to love your rump (roast). I eventually got it together and cooked. 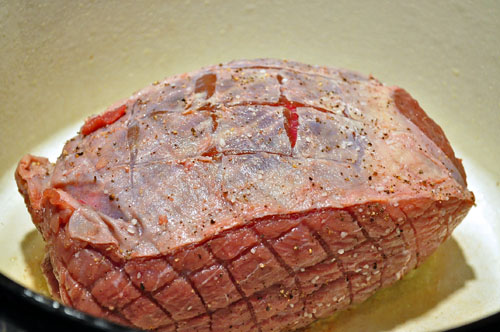 You know the drill by now I’m sure. Season it well on all sides. I removed the netting because it kind of annoyed me, and I also made some slits in the tough membrane so it didn’t cause the roast to shrink into a funny shape. Brown it well in the Dutch oven on the stove… 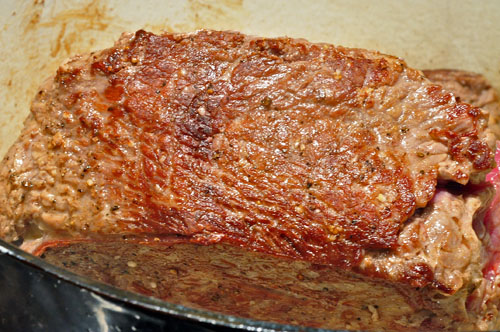 …until it’s nice and golden brown on all sides like this. 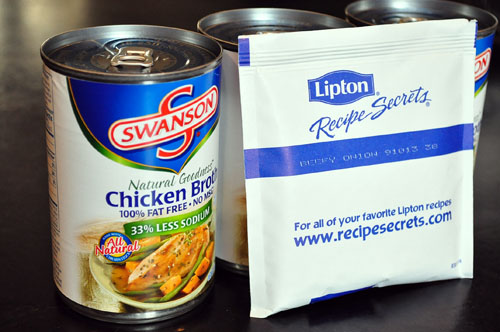 Then pour in a package of dry onion soup mix (one of the few times I use a short cut like this) along with two cans of stock and two onions sliced into half moons. 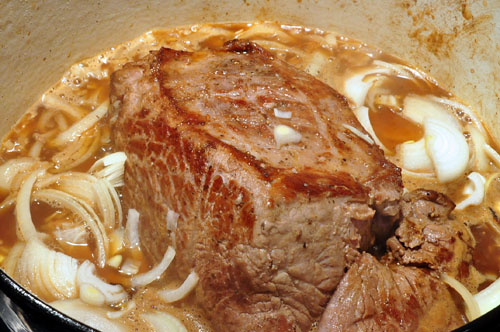 Let it some to a boil on the stove, cover it, then let it roast in the oven for a few hours. The meat is tender as can be and the reduced gravy made from the stock and onion soup mix is perfect spooned over the top. Serve it with some oven roasted potatoes and a green salad and call it a night!

Season roast well on all sides with salt and pepper. Heat oil in a Dutch oven over medium high heat, then sear roast on all sides until very golden brown, about 10 minutes total. Add remaining ingredients, cover, and bring to a boil. Transfer to a 300 degree oven and cook for 3-4 hours until meat is very tender and stock has reduced. Slice against the grain and serve with some tender onions and gravy over the top.