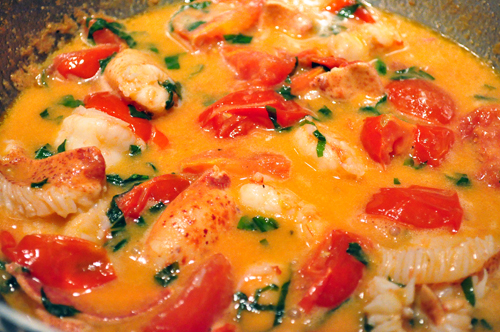 It’s finally the weekend, and so what better way to celebrate than with a ridiculously decadent dinner? This isn’t something you make everyday – it’s too expensive, and frankly it’s too rich. But for one single special meal? When you really want to splurge? This might be hard to beat! 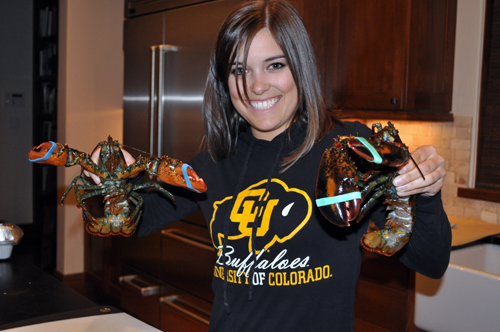 Last week my daughter was home for her weekly Wednesday cooking lesson, and besides making tiramisu, she had lobster high on her priority list. She had never tasted it, never bought a live lobster, and didn’t know how to kill and cook it. What better way to learn than on mom’s budget, right? I mean, what college kid is going to go out and buy two lobsters for a lesson?! 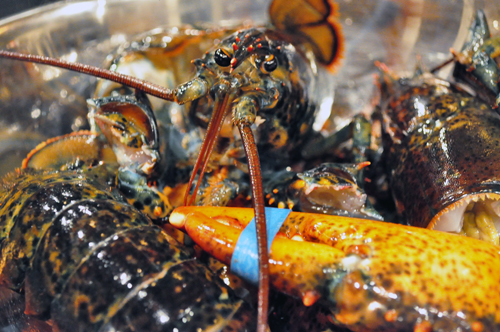 I’ll spare you from the photos of her doing the deed, but I did teach her the most humane way to kill a lobster, and then taught her how to section it into parts. 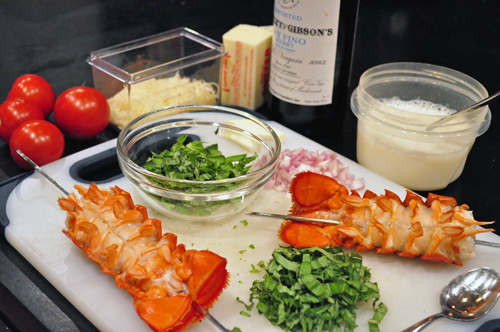 We prepped everything for the two dishes we set out to make – Lobster Thermidor for her using the tails (she also added shrimp), and a Butter Poached Lobster dish with Tomato and Basil for me using the claws. (During these weekly cooking lessons, my husband jumps in and grabs what looks good and we have more of!) 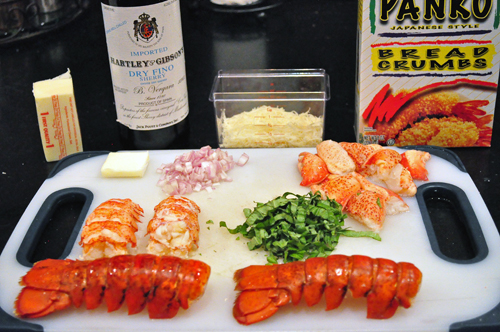 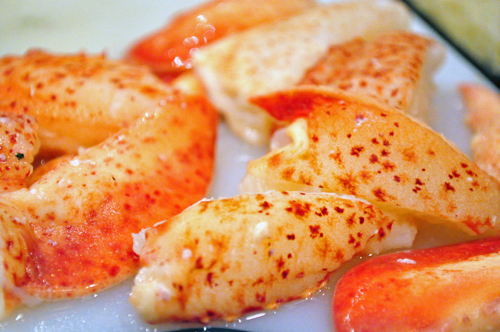 Interestingly, despite growing up with annual visits to grandparents in New England, where lobster was always on the menu, I just developed a taste for it at my birthday dinner last year. I guess I’ve saved a bundle on this pricey indulgence over the years! Doesn’t the claw meat look gorgeous?

To make the Butter Poached Lobster, you simply poach the half-cooked claw meat in butter along with tomatoes and basil. The butter takes on a pinkish hue from the tomatoes, and every flavor is lifted with the silky butter flavoring enhanced with basil. I ate this straight out of the pot, so no plated photos to share. But I think this dish would actually be wonderful over angel hair pasta, which is how I plan to make it next time. In the mood for lobster? This is pretty darn easy and incredibly delicious!

Steam or boil the lobster for 3-5 minutes, then remove and let cool until you can handle it. Remove tail and claw meat and discard shell. Cut lobster meat into large chunks and set aside. Heat butter to just barely bubbling over medium heat in a large saucepan. Add lobster, tomatoes and basil, and poach for about 5 minutes, turning lobster pieces occasionally.