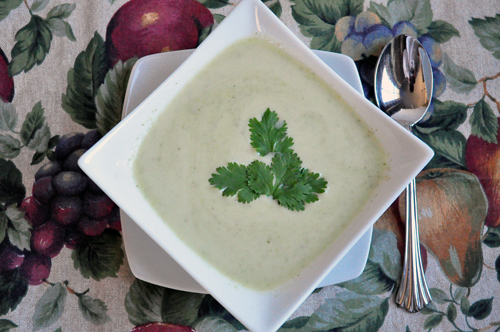 Soup…it’s about the only thing about winter that I truly enjoy. Yes the snow is lovely – but it’s a pain to shovel and is melting into my garage and flooding. Yes the sun shining off the glistening branches is pretty – but it’s not warm enough to melt the ice off the sidewalks and driveway. Yes it looks warm enough out – but then you get that cold blast when you open the door to remind you it’s really winter. See why I like soup?! It’s warm and comforting, and it gets me through the winter. 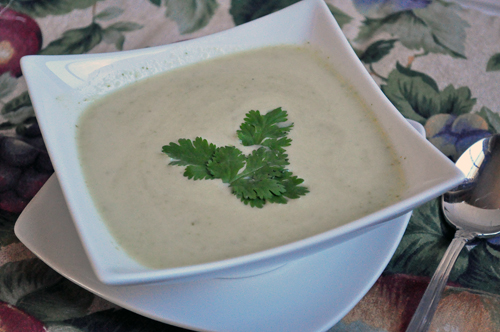 I first had cream of cilantro soup at a restaurant in Puerto Vallarta years ago on a trip with my best girlfriends. After a bunch of messing around with recipes, I created this one that I think is a pretty good rendition. It’s best topped with crunchy, garlic croutons, but they didn’t want to cooperate for the photo shoot!

Heat the olive oil in a large saucepan over medium heat until hot. Add the onion, leek, celery, and a little salt to draw the water out of the onion. Cover and cook until the vegetables are soft but not brown, about 10 minutes. Add the garlic, potatoes, and stock, and season with salt and pepper to taste. Bring to a boil over high heat, reduce the heat to a simmer, cover and cook until the vegetables are very tender, about 15 minutes. Remove pot from heat. Add the cilantro and puree using either an immersion blender or in a traditional blender. Return soup to pot and pot to stove, add the cream and cook on medium heat just long enough to heat through.

If you want to add texture to the soup, simmer some finely sliced celery in the soup after you’ve pureed it just until tender, about 10 minutes.