“What’s in the Pantry” Pasta 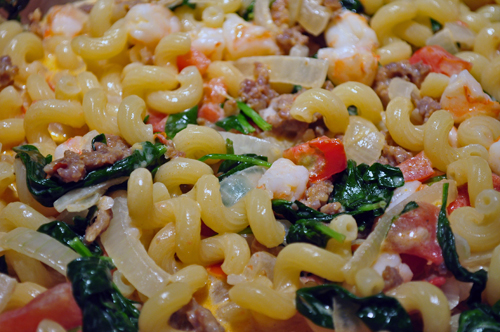 My daughter was recently lamenting that one of her biggest motivators to attend culinary school (she’ll be doing Johnson & Wales’ one year “Garnish Your Degree” program when she graduates from college) is to learn how to cook without a recipe. Boy, can I ever relate to that. In fact, it was my frustration that I felt like a great cook from a recipe, but lost when trying to figure it out on my own, that led me to start taking cooking classes. And that eventually led me to a career as a cooking teacher and food writer. 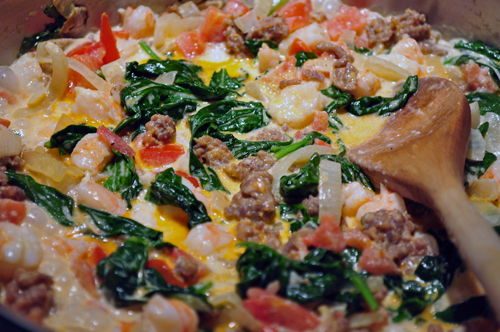 One of the first areas I started experimenting with was pasta. I started to see that you could envision the protein, what vegetables might taste good with that, what kind of sauce you’d like, add in aromatics and some cheese, and voila – dinner on the table. Today I teach this class occasionally called “What’s For Dinner?” and we do just that – peruse the pantry, figure out what looks good and sounds tasty, and start cooking.

Here’s how this pasta dish came together (and this is the order I decided things). My husband said he wanted a shrimp and pasta dish. I found a small amount of shrimp in the freezer, but not enough for two people. I also found a small amount of Italian sausage left from one of my husband’s baked pasta dishes. Since he never wraps things well and they get freezer burn quickly, I decided to use both the shrimp and sausage. For vegetables, I found a small amount of fresh spinach in the refrigerator that was going to go bad if I didn’t use it soon, along with a couple of tomatoes that were also near the end of their life. I added some diced onion and minced garlic for my aromatics, and decided a cream sauce would be nice (it mixes with cooking tomatoes to give you a kind of pink sauce).

As for the cooking process, I browned the sausage along with the minced onion, then added the spinach and tomatoes to cook down, along withe the garlic. I poured in some heavy cream and let that just come up to a boil to start thickening, then threw the peeled shrimp on top, covered the pan, and turned it off. The steam and heat from the sauce cooked the shrimp while I cooked the pasta. I tossed the cooked pasta with the sauce and let it meld for a minute, then stirred in some Parmigiano Reggiano cheese and adjusted the seasonings. The whole meal was done in about 20 minutes.

Don’t be shy about breaking away from recipes and trying something on your own – you just might surprise yourself and your family!