The Lazy Way to Make a Potato Gratin (Scalloped Potatoes) 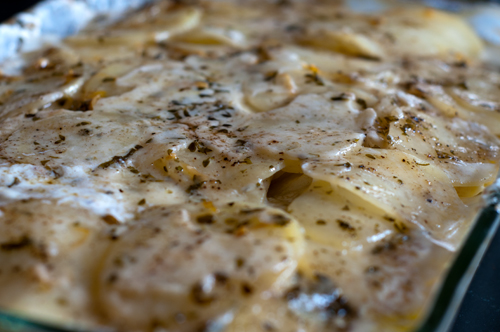 I frequently make a potato gratin – a potato casserole with elegantly layered thin slices of potato, heavy cream, and a topping of cheese – for special meals or events I’m catering. It’s pretty when sliced, it’s decadent, and it can be made ahead and reheated. Imagine relaxing on Thanksgiving instead of cooking all day, right?! Well last week as I was making this for a catered party that was to be held the day after I moved my mom into assisted living (an 8 hour, storm the place, family effort to get her moved that left me mentally and physically exhausted), I just didn’t have the time or energy for meticulously layering the potatoes and other ingredients to create the gratin the way I usually do. And then, in a moment of exhaustion or brilliance, an idea came to me. 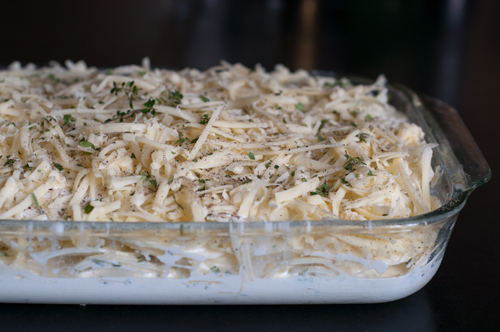 In all fairness, I shouldn’t claim this as my own brilliant idea. What actually happened is that a memory of watching Ina Garten on The Barefoot Contessa years ago popped into my head and I remember her just dumping everything into the dish to bake. Sure enough, if you thinly slice the potatoes into a bowl of cold water (to keep them from browning while you work) and then drain them and toss them with the cream, you can dump the whole thing into a large baking dish and press them down into a layered dish like this just as easily. Whew – that sure made my day easier last week, and I’m hoping it might make your holiday easier too.

5.0 from 1 reviews
The Lazy Way to Make a Potato Gratin (Scalloped Potatoes)

Print
Prep time
15 mins
Cook time
75 mins
Total time
1 hour 30 mins
Author: Cooking with Michele
Recipe type: Side Dish
Serves: 12
Ingredients
Instructions
Notes
You don't want too much heavy cream in your dish or it will never cook up and thicken. Better to toss the potatoes with the smaller amount of cream and drizzle a little more over the top if needed than to douse them in cream. Once the layers of potato are pressed into the baking dish, the cream should not come more than ⅓ of the way up the side of the dish - if you have too much cream, pour a bit off before baking.
Wordpress Recipe Plugin by EasyRecipe
3.1.09