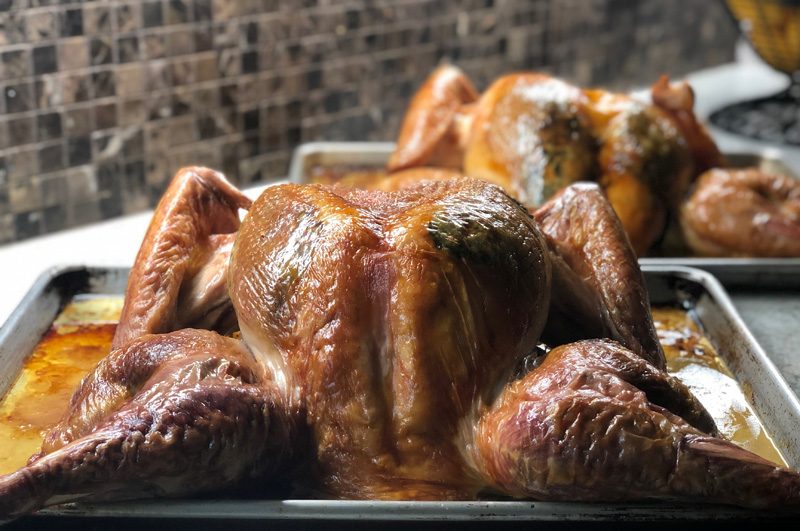 Why do you spatchcock a turkey to cook it, besides the fact that it’s fun to say that? For starters, it cooks faster. But it’s also easier to handle, gets perfectly crisp skin all over because the legs and side of the bird are facing up. Here’s a step by step process to cook your bird this way:

1. First, I’m an advocate of small birds – preferably 10-12 pounds. They’re more tender, they cook faster, and they’ll fit more or less on a rack over a rimmed baking sheet once the bird is opened up.

2. Use heavy duty kitchen shears to cut along both sides of the back bone of the bird to remove it. Mine was really difficult to do and I ended up using a meat cleaver to sort of hack my way through it. Just keep your other hand out of the way if you do it like this!

3. If desired, cut under the ribs and cut them away also, then flip the bird and press down hard in the center to open up the breast bone and flatten it out a bit.

4. Combine the back bone and ribs in a stock pot with celery, carrot, onion, bay leaves, and some peppercorns and cover with water. Simmer for a couple of hours then strain and discard solids. This will be the base for your gravy as well as the stock you are going to use on the white meat before serving.

5. Skip both wet and dry brining! I know that’s contradictory to everything you’ve been told for the last few years and it’s contrary to everything I’ve blogged about. But let’s face it, that’s a ton of work. And it also complicates making gravy as the drippings are very salty. So this year I followed a tip from the NY Times and simply sliced the white meat very thin, lay it on the platter, and then poured a small amount of rich broth over it before serving. Moist, tender, perfect, with no extra work. Not sure I’ll ever brine again! 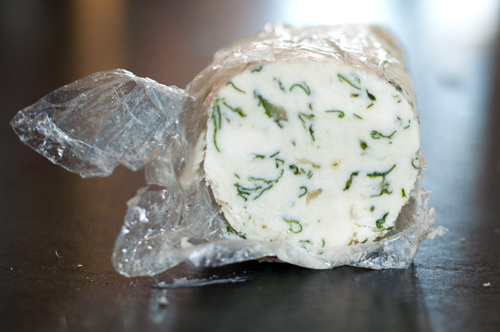 6. Instead of brining, make a compound herb butter, open up a pocket under the skin of the breast, and shove a nice amount in there. Press down to spread it around. It both flavors the meat as well as keeps it moist while cooking.

7. Lay the bird on a wire rack over a rimmed baking sheet. If the ends of the legs stick out a little don’t worry about it as there’s not much there to drip in your oven.

8. Cook the turkey at about 350 degrees – and guess what? I didn’t baste that bird one single time yet it’s that beautifully browned and crisped. Just watch the bird carefully as it will cook much faster – mine in less than 90 minutes with two 12-15 birds in the oven. Use a meat thermometer and pull it out at about 160 degrees to rest.

9. Move the bird to a cutting board and pour the drippings back into broth you saved. Bring to a boil and let it reduce and thicken a bit. Then remove some to pour over the white meat, and use the rest to make gravy. Thicken with flour, cornstarch, or even dry potato flakes if your group has allergies like mine did.

Wondering where the stuffing is? I always make that in a side casserole dish for food safety reasons. If you want it to taste like it was cooked in the bird and you don’t have vegetarians to satisfy, simply pour some of the broth/drippings over the top before serving.