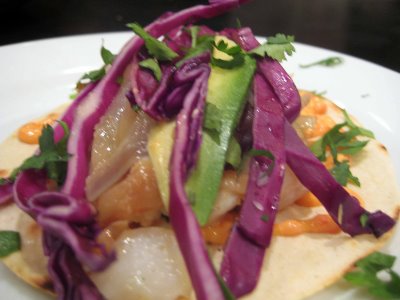 I don’t know what it was about the cold weather this week that made me crave fish tacos. Perhaps since we no longer take spring break trips to Cabo with the kids I just felt I had to make this at home. They’re really pretty simple to make and I love them (my husband less so…but he’s picky and eats like a bird if I haven’t shared that). Let’s start with the tortillas – I prefer corn as they are lower in fat/calories, have a better taste, and have more fiber in them. I also prefer to toast mine slightly in a dry skillet as opposed to frying them in oil to heat them up, but you can do either. Seasonings, sauces, and toppings are a matter of personal taste (and what you have on hand). 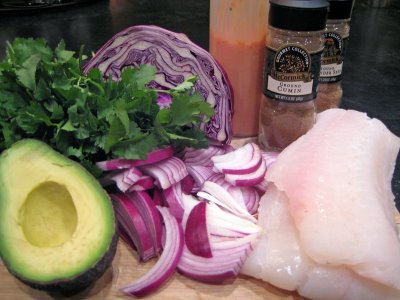 Here’s what I happened to have on hand – half of an avocado (plenty for two servings), red cabbage red onion, some cod filets (purchased fresh), cumin, coriander, corn tortillas (not pictured) and some roasted red pepper aioli. I also had fresh cilantro – it stores well if you cut the end off the stems and put it in the fridge in a glass of water like flowers. Don’t even bother with dried – it tastes nothing like the real thing! 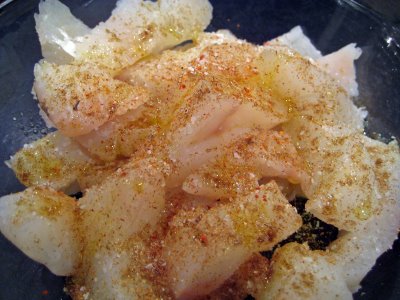 I started by cutting the fish into 1 inch strips – in hindsight I wish I had used a firmer fish like mahi mahi as the cod just fell apart while sauteing it – then seasoned the fish with cumin, coriander, a little crushed red pepper flakes, and some extra virgin olive oil. 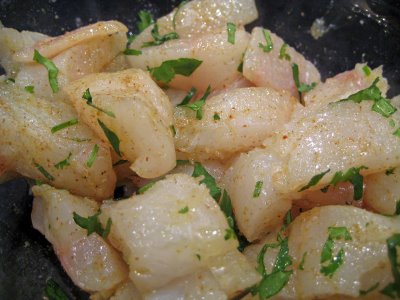 I tossed that all together and threw in a little chopped fresh cilantro. I first cooked the sliced red onions in a large skillet with a little salt and oil, then added the fish and cooked it just until cooked through, adding a splash of the wine I was drinking for a little acidity. 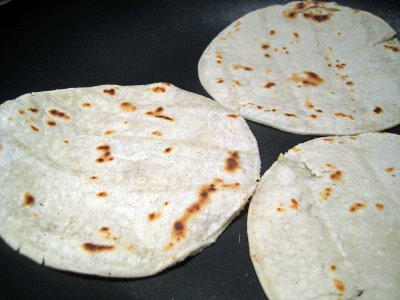 While the fish was cooking, I heated the corn tortillas in a dry skillet just until they got a a few brown marks on them. If you overcook them they’ll be too crumbly to fold in half around the taco fillings. Just stack ’em up on a plate as you do them and the steam will keep them hot and supple. 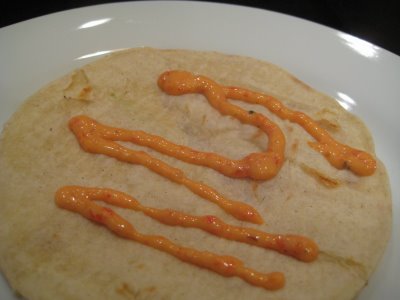 To assemble the tacos, I first drizzled some of the roasted red pepper aioli across a corn tortilla, spread a few pieces of fish and some onions down the center, topped that with a sliver of avocado and a few shreds of red cabbage, and sprinkled the whole thing with some fresh chopped cilantro. I was craving a lime to squeeze over the top, but we were out!

Heat a large skillet over medium high heat; add half of the olive oil and the red onions, season with salt and pepper, and cook until slightly softened. Cut fish into 1 inch by 2 inch pieces. In a large bowl, combine fish, cumin, coriander, red pepper, remaining olive oil, and about 1 tablespoon of the cilantro. Add fish to skillet and cook, turning occasionally, just until fish is cooked through. To assemble tacos, drizzle some roasted red pepper aioli on a tortilla, top with fish and onions, a slice of avocado, some shredded red cabbage, and a sprinkling of cilantro. Fold in half or serve open. Serve 3 tacos per person with a wedge of lime.