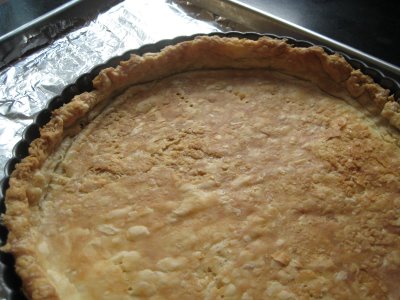 Everyone who cooks with me knows I’m not a baker. But the one thing I latched onto in pastry school was tarts. It all starts with a great flaky crust, and for me that also means an all-butter crust. I was once told making crust was a 3-day process: the first day you make the dough, the second day you roll the dough, and the third day you bake the crust. While you don’t need to spend 3 days doing it, the point is that the dough does need to rest a bit between mixing it, rolling it, and baking it or you’ll have excess shrinkage of your tart crust.
The other secret to a great flaky crust is to not overwork the dough. It should still have pea-sized chunks of butter that you can see in the flour – when the crust heats up in the oven this butter melts, letting off steam from the water in the butter, and that’s what creates the flaky layers in a crust. The dough should also not be too wet – as soon as the dough starts to come together, stop adding water, even if you’ve only added half the amount. 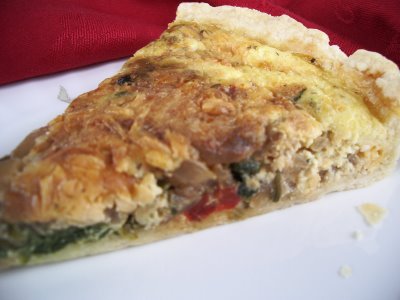 You can use a wide variety of ingredients to fill a savory tart – thing quiche from the old days. Some of my favorites are Swiss chard and pancetta with Parmigiano Reggiano, roasted red pepper and feta, bacon and caramelized onions with Gruyere, and andouille sausage with cheddar. You can also skip the cheese and make it fully vegetarian if you prefer. 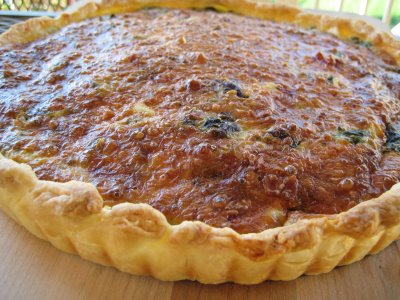 Blend flour, salt and butter in an electric mixing bowl on medium low until roughly combined; small lumps of butter should still be visible. Combine water and vinegar. With the mixer on medium low, add liquid slowly just until the dough comes together. When it begins to form a ball, stop adding liquid even if you have some left.

Remove dough, pat into a ball and cut in half. Flatten each half in plastic wrap into a thick disk, about 5 inches wide. Wrap well and refrigerate one crust for 1 hour or up to 24 hours. Wrap second crust well and freeze for another use.

Roast red peppers, skin side up, under the broiler and until the skin is fully blackened (10-15 minutes). Remove from oven and place peppers in a sealed plastic bag to cool. Meanwhile, line tart crust with foil and add pie weights. Bake at 350Â° for 15 minutes. Remove pie weights, discard foil and set crust aside.

Remove the charred skin from the peppers and discard. Chop peppers. In a large bowl, beat eggs together lightly, then add half and half, oregano, salt and pepper. Mix well with a whisk.

Place tart pan on a baking sheet. Spread peppers, spinach and feta cheese evenly over the bottom of the tart crust. Gently pour egg mixture on top, being careful not to overfill. Return tart to oven and bake until lightly golden on top and a toothpick comes out clean, about an hour. Let cool slightly before removing outer rim from tart pan and serving.