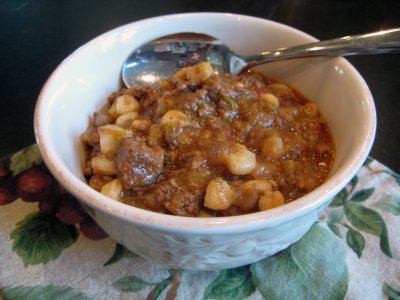 The Super Bowl was yesterday and for many of you that meant a huge party with tons of food, and you might have even spent hours prepping your favorite football fare. As it turned out, my husband and I were alone for the game, but I felt I needed to make at least one seasonal dish, so I pulled together this SIMPLE green chili type of stew.

I know when I say simple some of you cringe with disbelief, but this recipe falls into that category that some call speed scratch, semi-homemade, or any number of other names. You start with a few fresh ingredients, add to it some store bought ingredients, and you end up with fabulous fare that’s quick and easy. 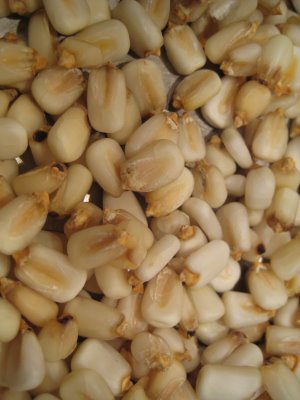 I found about a cup of dry posole left in my pantry so I started by preparing to cook that. Let me first say that if you’re doing this for a quick week night meal, buy canned. The dry takes a heck of a long time to cook (as in hours) and frankly mine was less than fully cooked when I ate dinner at 8:30 or 9:00. 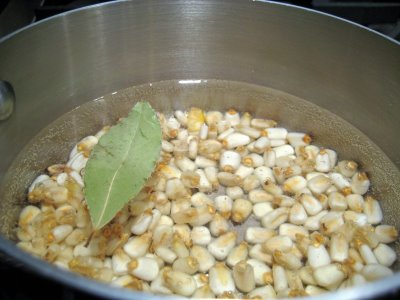 If you do opt for dried, simply simmer the posole with a bay leaf and a little salt in a large pot of water until it bursts open. You’ll know it’s cooked with it has the texture of a dense wet popcorn kernel. 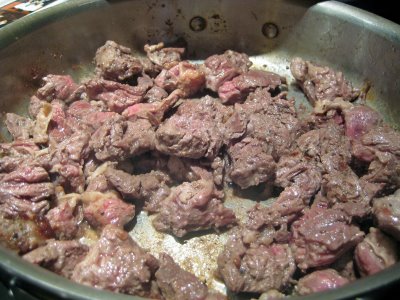 While that was cooking I browned some chunks of beef – this was a combo of a few beef tenderloin pieces I had left from trimming a whole tenderloin for a party and a grass-fed skirt steak that I cut up. Take the meat out of the pan after it’s browned and put it in a large pot. 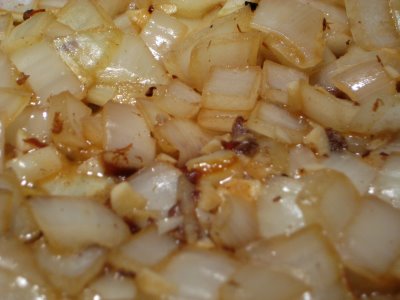 Next I added one very large diced onion and a couple of cloves of minced garlic to the pan the meat had cooked in and let them saute for a bit. See how they pick up the brown bits from the meat? That’s flavor baby! I actually threw in about 1/2 cup of white wine towards the end to help pick up those flavor bits, but you don’t have to do that. 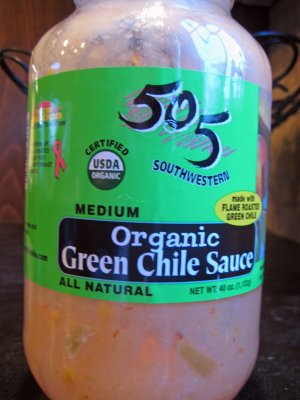 Here’s where the speed scratch comes in – in the large pot I combined the browned beef (about 1 1/2 pounds) with the onions and garlic and a large jar of 505 green chili sauce. I like it a little zippy so I buy the medium, but you can use mild if you like. I also added the mostly cooked posole (this is where you would add the drained canned posole if you are using that). Because I had used a somewhat tough cut (the grass fed skirt steak) I knew simmering this for a long time would be key. I let it go for a couple of hours while we groaned at how pitiful the game was and laughed at a few of the commercials. When I finally dug in late in the evening, it was tender and delicious. Moreover, it was great reheated for lunch today!