I really love the VISA signature sponsored Foodbuzz 24, 24, 24 events. I did one in May to host friends for an appetizer to dessert dinner on the grill and another one in July to show just what can be made from a week’s worth of bounty from my CSA, my garden and the farmer’s market. This month I was selected for my proposal to scour my small neighborhood in search of the ethnic restaurants that seem to be inspired by living next to a university. So I set off with my friend Susan for a day of tasting, and was a bit surprised by what I found. 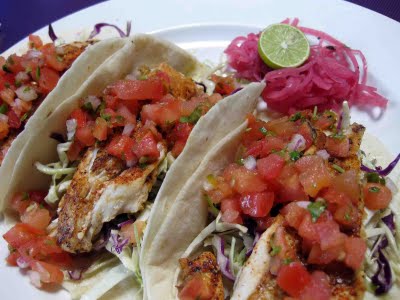 My first stop was The Pioneer, a small, somewhat hole-in-the-wall type of place that college kids love for hanging out, playing pool, and watching sports on the TVs scattered inside. This spot happens to specialize in tacosÂ – the menu boasts about a dozen varieties. 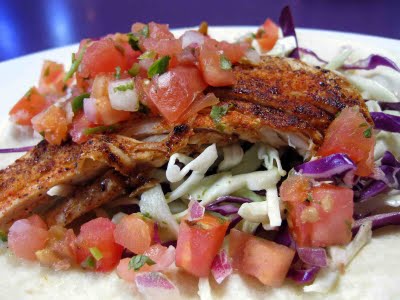 Knowing I would be in for eating at several more stops after this one, we opted for the fish tacos, passing up the ever favorite pork carnitas, chicken tinga, carne asada and al pastor. The Pioneer was virtually empty at lunch – a stark contrast to the place on a Friday night when the University of Denver is in session. But the tacos, advertised as their house specialty, were calling me so we made this our first stop. I usually prefer corn tortillas, but I think fish tacos fall apart on corn, so I like the fact that The Pioneer serves them on flour tortillas. 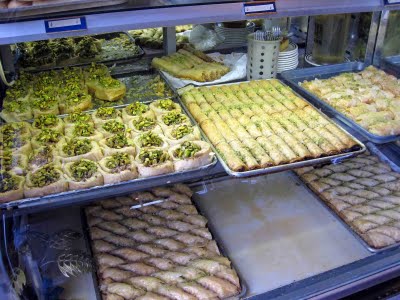 Next stop was Jerusalem Restaurant, just to the west of DU. Now talk about a hole in the wall – this place barely has walls, and it’s really most pleasant to dine there when the weather is good, or you might just melt or freeze. 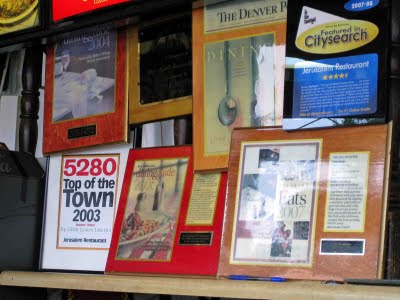 Jerusalem is always bustling with diners – students, professors, young working professionals, and neighborhood friends. The menu contains all of the classic middle eastern dishes, and it gets constant praise from the local magazines and food critics – partially for the food itself, and partially, I think, for the unbelievably generous portions at low prices. 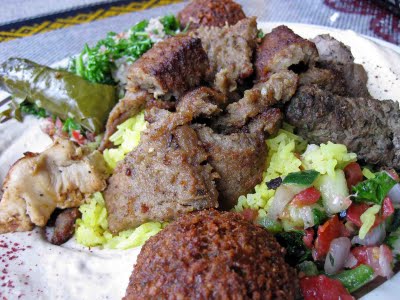 Amazingly, the Combination ” Super Dish ” plate is only about $10 and it’s more than enough to feed two people. It boasts a combination of Sheesh Kabob (tender cubes of beef marinated with lemon, oregano and spices), Kifta Kabob (lean ground sirloin mixed with onions and parsley, then marinated with spices, onions and tomatoes before being grilled), Chicken Kabob, Hommoss (dip made from pureed chick peas mixed with garlic, tahini (sesame sauce), lemon, and oil), Falafel (chickpea fritters), Baba Ghanouj (pureed dip made of eggplant, tahini, yogurt, garlic, and lemon), Tabbouleh (finely chopped fresh parsley, spring onions, diced tomatoes, with cracked wheat, lemon juice and oil – heavy on the parsley as is traditional as compared to my tabbouleh recipe which is heavier on the bulgur and vegetables), Fatouch (salad of diced tomatoes, cucumbers, bell peppers, chopped fresh parsley, green onions, lemon and oil), Gyros (lamb filets) and Grape Leaves (stuffed with rice, diced tomatoes, chopped fresh parsley, and onions). Plus the whole thing is served over a large mound of jasmine rice cooked with spices. Can you believe we still went to two more restaurants after this?! 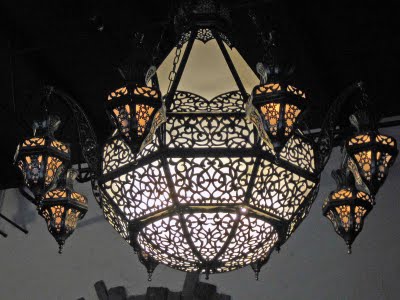 Already feeling a bit full, we headed for Marrakech Cafe. Now with a name like that, wouldn’t you expect to see couscous, tagine, pastilla, or any other authentic Moroccan dishes? Turns out that’s what you can get if you go to the Marrakesh Restaurant in downtown Denver, but not what the Marrakech Cafe offers. I can’t point you to their website because the billing department suspended their account, but to our disappointment, the menu was filled with virtually the same dishes the we had just had a Jerusalem. Not that they weren’t good – just that we were looking for variety on our cafe crawl. 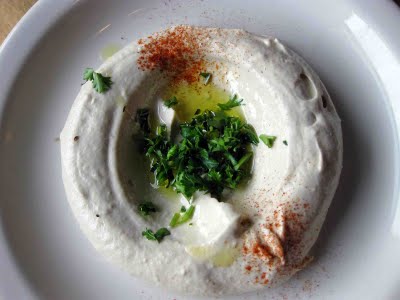 Marrakech Grill is actually quite nice inside, with authentic style decor. We ordered a single entree to start and it came with some hummus and pita bread to start… 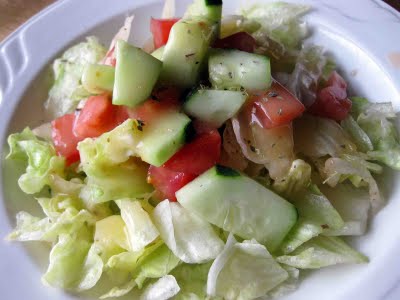 …as well as a very simple tossed salad of iceberg lettuce, tomatoes and cucumbers in a vinaigrette of sorts. 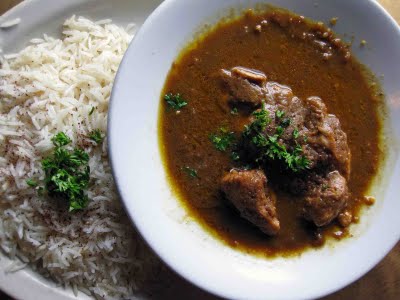 For the entree we ordered Fesenjan, mostly because it looked unusual and sounded good. If you look it up, it’s a Persian (Iranian) dish of chicken and onions simmered in a sauce made from finely minced walnuts and pomegranate syrup. 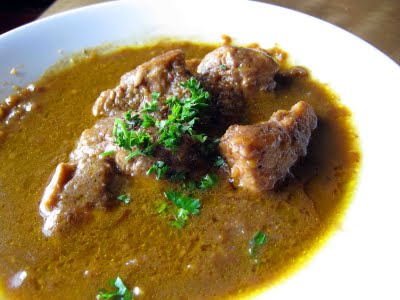 It was incredibly good – so good I’m going to make a version of it and post it for you – but certainly not an authentic Moroccan dish. This restaurant, surprisingly, was filled not with college students, but with a combination of middle eastern and local business people. 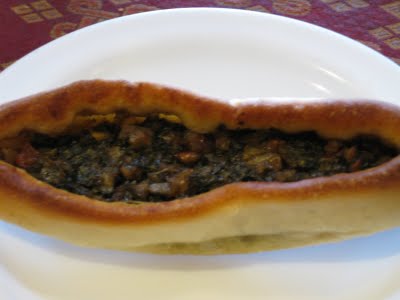 Last up on our whirlwind ethnic lunch tour was Damascus, another middle eastern restaurant less than a mile from DU. The walls are filled with posters of Syria, but again, the menu was largely the same as Jerusalem. We managed to pull our waitress aside to pick her brain about the lack of individuality in any of these spots, and it turns out she was the owner’s daughter, and had alot to say. First, she pointed out that in Denver, you might have a Syrian property owner, an Iranian restaurant owner, and a Morrocan chef, all working towards producing quality food for their clients. The menus become a blend of the dishes that are largely available across the middle east, but with some variations in how they are prepared and the spelling of the names of each dish. She was quite opinionated about what constitutes good middle eastern food, labeling the stuff at Jerusalem as “crap” and explaining that at Damascus they take great pride in creating from scratch (including the pita bread) with the best ingredients. (To her defense, they have been around forever.) 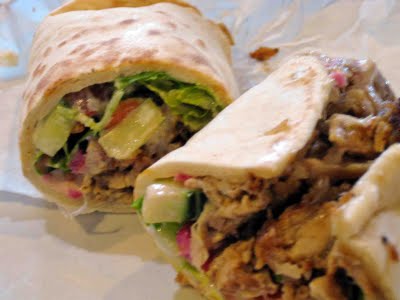 In search of something that was the “most Syrian” she suggested the Shawarma sandwich, a wrap that originated in Turkey (shawarma loosely means roast in Turkish) and is sometimes called the middle eastern taco. It starts with boneless, skinless chicken (or lean lamb or beef) that is marinated with garlic, salt, pepper, allspice, cardamom, cloves, nutmeg, yogurt and lemon. The cooked meat is wrapped in a folded soft pita bread along with some cucumbers, tomatoes, pickled onions, and yogurt sauce. Despite this being our fourth lunch of the day, we managed to eat every bite of Shawarma – it was that good! And interestingly, this restaurant was also not filled with college students, but with patrons of middle eastern descent, and mostly of families. Here are my observations on our day of ethnic dining in Denver: