Colorado is certainly no stranger to freak snow storms – we get them early, we get them late, we get them when we least want them – but somehow getting one this big before Halloween has even hit was a bit much. 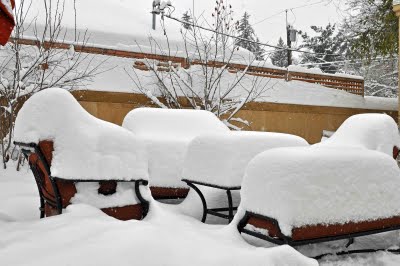 I didn’t take the time to measure that pile, but it’s over a foot for sure. There were reports of accumulations between 16 and 40 inches from here to the foothills. Only one thing to do…call my son to shovel and bake some cookies. 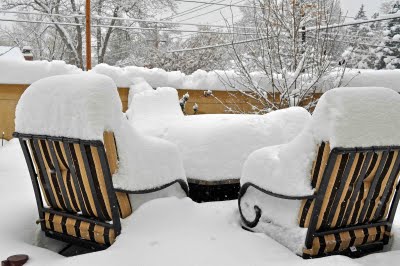 Shocked that I’m baking? Well, I was inspired by Heidi’s post of Apple and Carrot Shortbread yesterday. Funny how recipes make their way around and morph. She was inspired by a cookbook called Good Tempered Food and had made her own version. I was all set to make Heidi’s version when I discovered that what I thought were red carrots in my refrigerator were actually long radishes from my farm, so I decided to change it up once again.

I started by sifting together the dry ingredients, and decided to use half all purpose flour and half whole wheat flour. 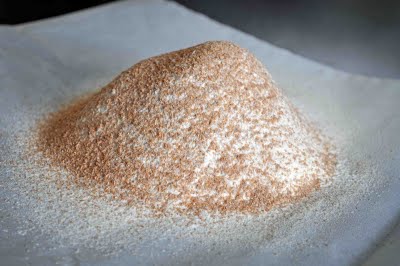 If you sift onto a piece of parchment paper or wax paper, you can then easily lift that up and pour your dry ingredients into the blender while it’s running. I also added cinnamon, which Heidi had not used, to the recipe. 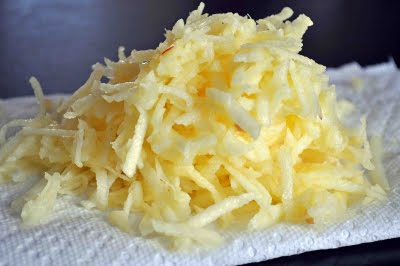 Next I peeled and grated a whole apple – that’s a lot more apple than Heidi used, but since I wasn’t going to use any carrots I figured the batter could hold this much. I creamed together the butter (a bit more than Heidi’s because I used a bit more flour) and brown sugar, added vanilla (not in Heidi’s), then the apple, then the dry ingredients. I don’t like nuts in cookies, but if you do, I think you could add some chopped nuts here too. 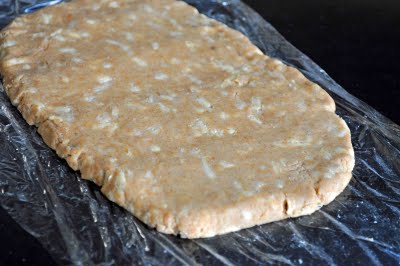 After refrigerating the dough I rolled it out to about 1/2 inch thickness. To make cleanup and therefore my life easier, I rolled it between the plastic wrap I had used to refrigerate the dough. 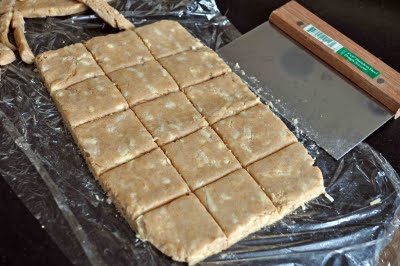 While I could have used cookie cutters (Heidi’s are prettier), I didn’t want to have to continually piece back together the extra pieces of dough and roll them out again, so I opted for squares, leaving only a small amount of dough trimmings which I just nibbled on. 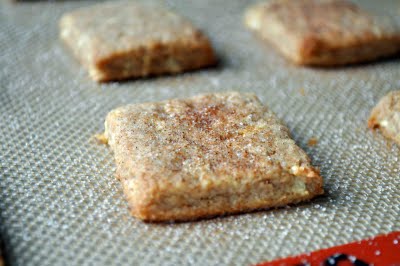 I always bake on silicone liners – they are reusable so less paper waste and they make great cookies. I had sprinkled these with a little cinnamon sugar before baking them (Heidi had brushed hers with milk instead) and love how that looks on top after baking. You just want these barely turning brown on the bottom – about 10-12 minutes in the oven will do it. 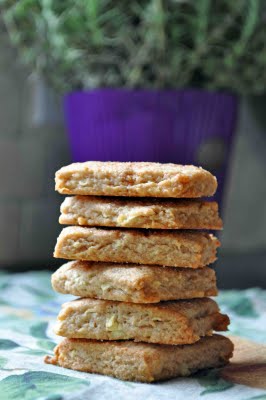 Who says baking is a science? I hear that all the time, yet I seemed to make changes with abandon to this recipe with stellar results. I didn’t eat quite this many cookies straight out of the oven…but the night is young and the snow is continuing to fall!

Preheat oven to 350 degrees F. Sift together flour, whole wheat flour, baking powder, cinnamon and salt onto a piece of parchment paper. Cream butter and sugar together until fluffy, then add vanilla and grated apple and mix on low to combine. Pat dough together, divide into 2 pieces, and use plastic wrap to press into a disk a little less than an inch thick. Wrap well with plastic and refrigerate for 30 minutes. Gently roll dough out just slightly between layers of plastic, to about 1/2 inch thickness and try to work into a rectangle shape. Use a pastry cutter to cut each rectangle into 15 squares, then use the pastry cutter to lift the cookies from the plastic and place onto a baking sheet lined with a Silpat silicone liner or parchment paper. Sprinkle with cinnamon sugar and bake for 10-12 minutes or until set and just barely browning at the edges. Let cool on baking sheet.