What a day it was yesterday. I’m still battling back from what I presume is the H1N1 virus I picked up from my son. While I’m not as sick as him, it just keeps hanging on! So trying to fill my time without infecting anyone, I spent yesterday at the computer entering recipes for the CSA cookbook I’m spearheading. That is, until the huge explosion that scared the @$#%$ out of me when a tree cutting service hit the power lines in my neighborhood and knocked out the power for the rest of the day. I meant to make shortbread cookies and photograph them, but that was out of the question, and it was late at night when I cooked dinner, so all I can offer today is a tip. 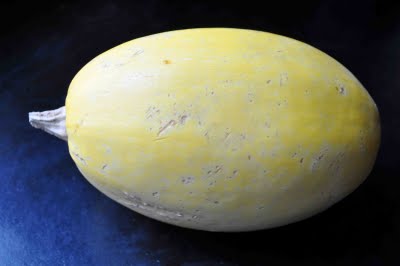 I’ve always cut spaghetti squash in half and roasted it cut side down in the oven. But I came across a tip from the cookbook input that made me rethink this.Â First of all, cutting it while raw is hard – it’s like a rock. Also, it tends to burn on the edges a little. The tip was to stick the whole thing into boiling water and cook it that way. You need to pierce the skin a few times so it doesn’t explode, and then you just boil it for about 30-45 minutes. 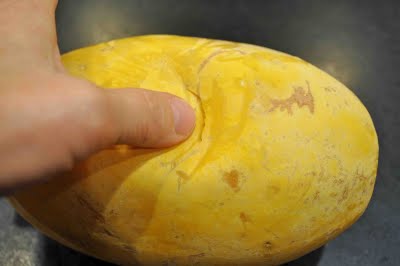 You know it’s done when you can push it in like this because it’s softened. I totally burned my thumb taking that picture for you, so let it cool before you mess with it! Once you can handle it, just cut it from top to bottom, scoop out and discard the seeds, and then scrape out and enjoy the strands of squash.