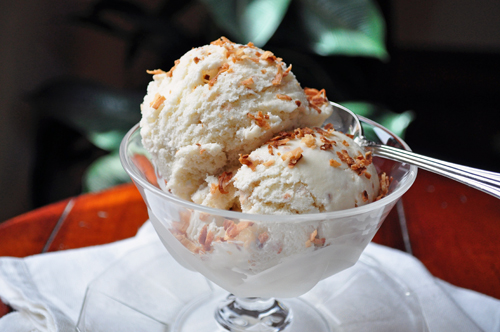 I get weird food cravings every once in awhile. Maybe toasted coconut ice cream doesn’t sound that weird to you, but it certainly wasn’t the obvious all-American dessert to make on Father’s Day to accompany my rib-fest. But I had a craving, and I had been itching to try making ice cream from coconut milk (sans dairy) for some time, so there you go. 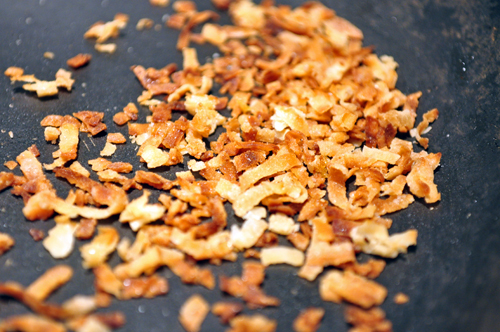 I’ll warn you up front: coconut toasts faster than even pine nuts, which translates to burned batches if you don’t watch it carefully on the stove. When it just starts to get brown, pull it off, stir it around, and it will continue to toast. 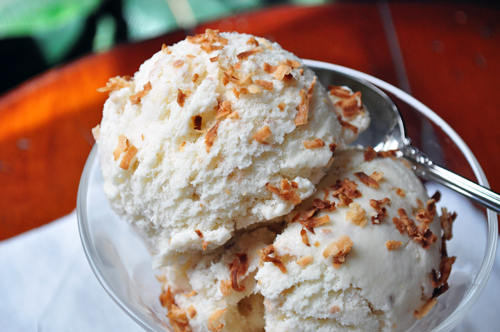 I like a custard based ice cream made with egg yolks, so added them to the mix here, but you can leave them out if you need to and make a straight coconut ice cream. I’ll warn you that the coconut milk is already less creamy than heavy cream, so it translates to a slightly icier/grainier texture. Leaving out the egg yolks will make it even less creamy. But despite the texture, this stuff is easy to make, delicious, and a great treat for those of you who can’t eat dairy. And it’s perfect for the heat that seems to have blanketed much of the northern hemisphere right now. Make a batch, put your feet up, and cool off!