With the state of the global economy still in question (despite the experts declaring today the end of the great recession of 2008-2009), many of you are looking for ways to do more with less, and in the kitchen that translates into managing food budgets and more scrutiny on menu planning at home. 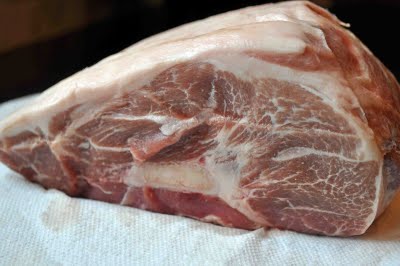 Well, long before we became obsessed with the finest center cuts of meat, folks ate pretty much the whole animal when it was processed, including the tough cuts like this pork shoulder. This animal was grass fed as well, which can make the meat even tougher. 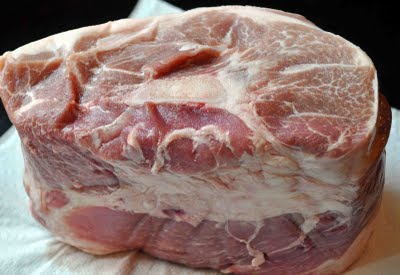 Just look at the muscles and tendons holding this baby together – it just looks like it will be impossible to make tender! Well fortunately, not only is that not true, but these cuts of meat have fabulous flavor. And given the slow cook time required, they make an ideal dish to put in the oven on a chilly Sunday while you watch a football game. 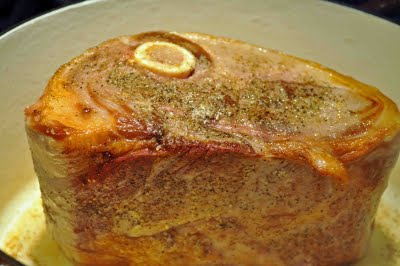 Start by patting it dry and seasoning it really well with salt and pepper, then sear it off on all sides in a very hot Dutch oven that you’ve added some extra virgin olive oil to. You want it nice and golden brown like I’ve done to this one so that you can maximize the flavor. 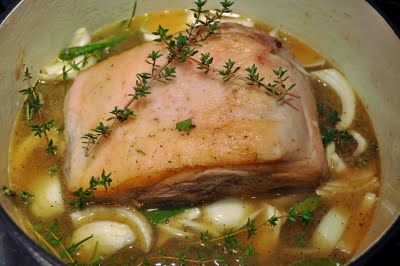 Next you need to add the flavorings and moisture for the long, slow braise in the oven. I added 1 can chicken stock, 1 can beef stock, and 1 can of white wine. Meaning I measured out that much into one of the empty cans – not meaning I now buy my wine in cans. Except for those really cute Sophia cans of sparkling wine with the straws…but I digress. Partially through the cooking I found that this really needed more liquid and I added another can of stock, so you can either start out with less and check it, or add it all at the beginning. Just make sure the roast has liquid at least half way up the sides of it at all times during cooking. You also want to flavor your roast, so add in a chopped onion and a bunch of herbs. I threw in two big sprigs of rosemary, a handful of thyme branches, a couple of bay leaves, and about a tablespoon of black peppercorns. 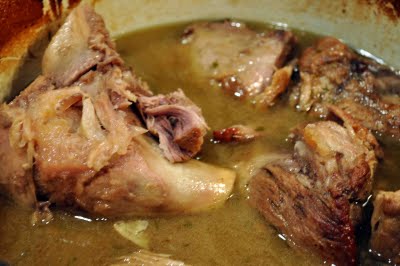 I checked the roast after two hours at 325, and while it was cooked through, I could barely get a knife even through it, and the meat wasn’t edible. But just two more hours in the oven and magically, the meat was falling off the bone and I could shred it with a fork. Take the meat out and strain those great reduced juices (discard the solids). You can also de-fat the liquid in one of those fancy measuring cups meant for that purpose, or if you’re feeling decadent like I was last night, just pour the fully fat stuff right over the meat on the plate. Let me tell you, this roast next to mashed potatoes (fresh from the farm) with butter, drizzled with the juices? Heaven on a plate! Use this technique for any large, tough roast – beef, lamb, pork, or bison and you won’t be disappointed.