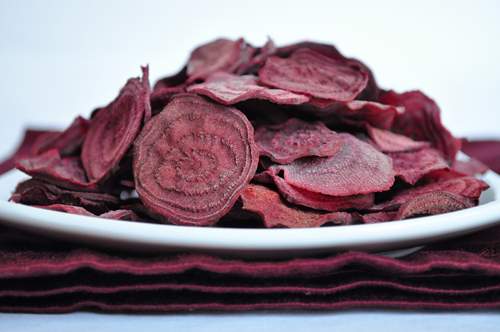 I have a habit of gaining culinary inspiration while exercising. I know it may seem like a self-defeating thing: I work out while watching food on TV which only fuels my appetite more and then I can’t wait to cook and eat again. But in this case, it’s a snack that’s crunchy, savory, a bit sweet, easy, and actually really good for you (don’t tell your kids that!). 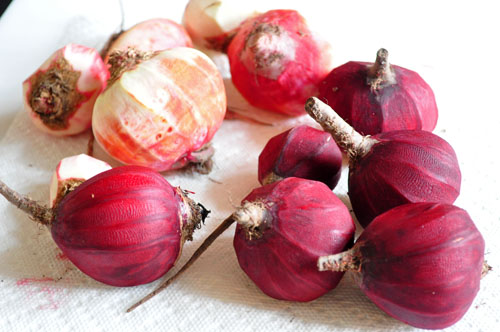 I’ve been trying to make it through these dark days (no food coming in from my farm) by using up what’s left in my pantry, freezer and refrigerator. And these beets have been hanging out for way too long. I peeled some red and some Chioggia beets, leaving the root end on to hold. 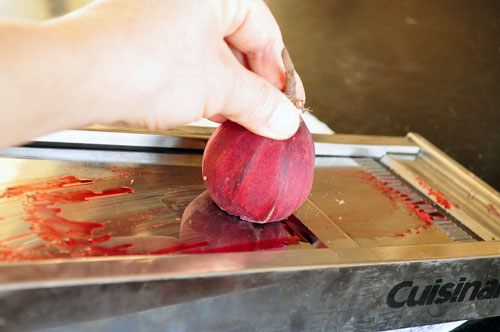 Slice off the other side and then, using a v-slicer or mandoline, slice them very thinly. Note that I did this over a paper towel to help keep the beets from staining my white cutting boards or counters. 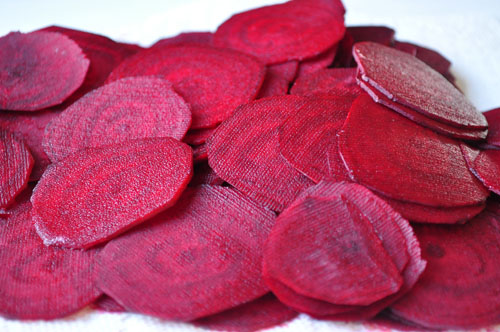 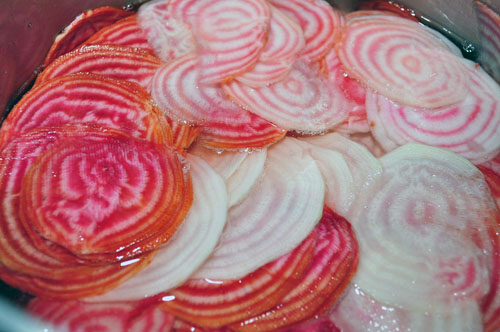 That you’ll want to soak in a warm simple syrup for about 15 minutes. This recipe came from Epicurious and was made on Gourmet’s Diary of a Foodie by Zanne Stewart. I don’t quite know why the soak in the simple syrup, but it appears to me that it softens the beet instead of it being a hard and brittle slice when you’re ready to bake them. Don’t be confused – my beets didn’t change color in the soaking process, but rather I photographed the slices of the red ones and the soaking of the Chioggia ones, just to keep you on your toes! 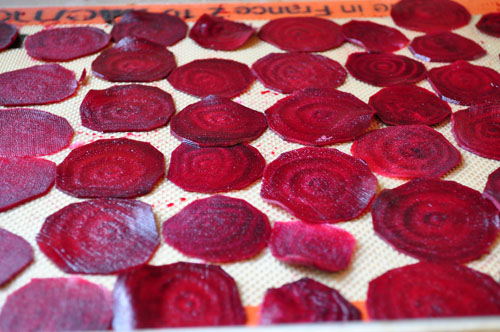 After they’ve soaked, drain them for a few minutes, then lay them out on a silicone baking sheet. This is one time there really is no substitute for the silicone mat, as it makes for perfectly crisp chips with no oil and no sticking. I salted some with a little sea salt and another tray I didn’t – can’t really tell much taste difference so leave off the salt if you need to for dietary reasons. 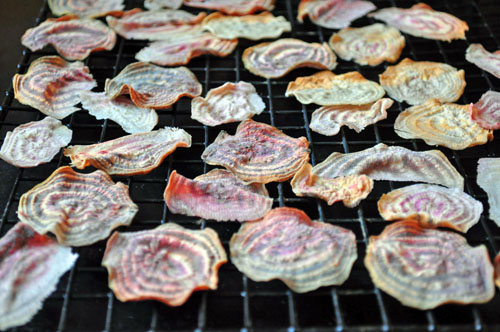 Bake them on a low temp for an hour, then let them cool on a baking rack. Don’t worry if they aren’t totally crisp when you take them out of the oven as they crisp up nicely while cooling. I think I’ve eaten the equivalent of about 4 beets today while working on this recipe and post. Hope you enjoy them as much as I did!