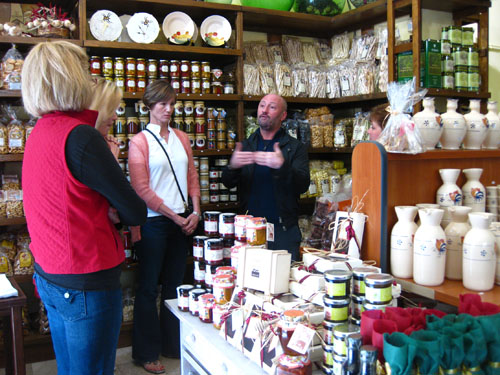 Those who havenâ€™t been to The Awaiting Table cookery school are sometimes a bit anxious the first day. Do I have enough skills to keep up? Will I like the food? Will I understand? In reality, the atmosphere couldnâ€™t be more pleasant, the explanations easier to understand, or the food more delicious. The day always begins (after a stop at Bar Martinica for a morning coffee) with a quick stop on the way to the market to explain some of the basics about food of the region: the frise dâ€™orzo (barley biscuits that are preserved and rehydrated in water), pasta dâ€™orzo (pasta made with a combination of semola and barley flour), and local cheeses (very few, primarily an aged ricotta similar to ricotta salata in the US). 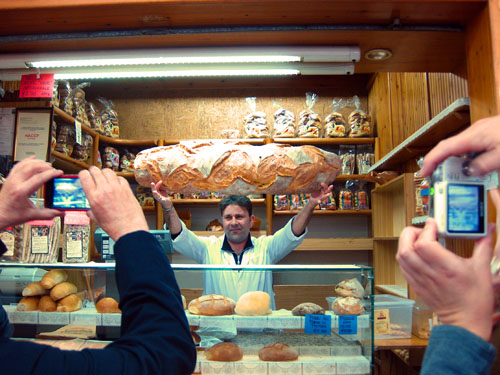 From the shop we continued to the market just at the edge of the historic old town where we visited Luca for the massive loaf of bread he has prepared for us for the week (his smile tells me heâ€™s glad weâ€™re impressed with his work), Simone for fruit and vegetables, Pina for peppers, and the busy men behind the counter at the salumeria for cured meats and cheeses. I was quite surprised that a number of the purveyors in the local market seemed to remember me from my last trip here, and was touched by their warm smiles and greetings ofÂ Â buon giorno. Loaded with everything we need for cooking today, we headed back to the school and started immediately with the pasta lesson. 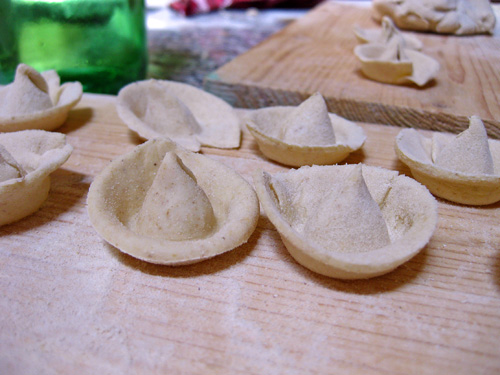 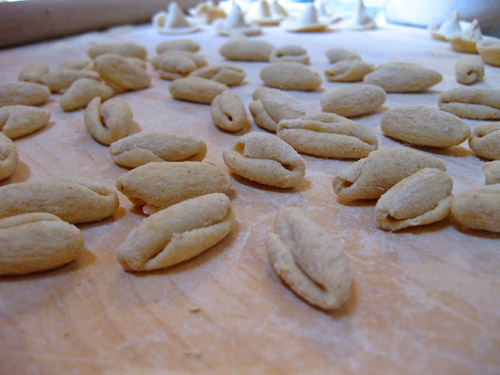 We learned how to make the barley pasta of the region – 2/3 semola to 1/3 barley flour, mixed only with water (no eggs), adding more semola as needed to get the right texture – and fashioned the dough into a rolled cut pasta of little Mexican hats for our lunch, then used the rest to make cavatelli (looks like tiny hot dog buns, and is a step easier to shape than pasta we will make later in the week) for dinner. For those of you who haven’t made homemade pasta, it’s an art, a craft that takes awhile to perfect, so be patient. 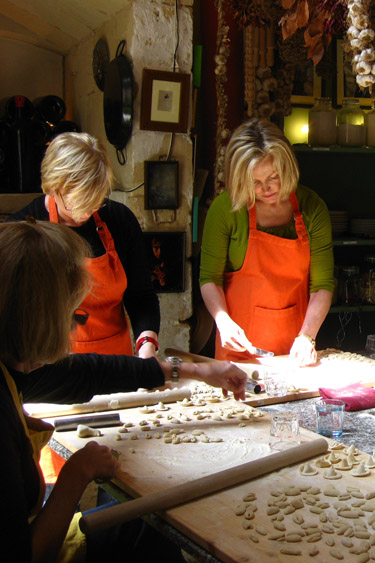 It takes some practice to make these pasta shapes by hand, and you can see how intently the ladies focus on the work…

…while Giuseppe, Silvestroâ€™s assistant at the school, seems to whip out each piece with little to no efforts. 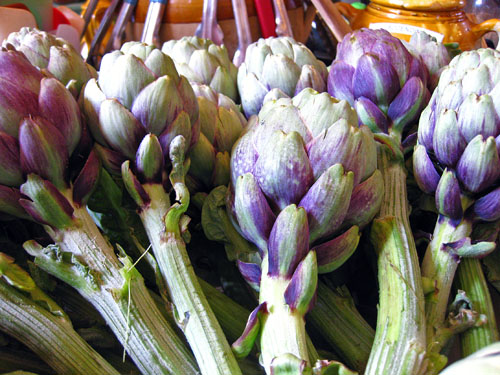 After putting the pasta for dinner up to dry on the racks, we were ready to tackle artichokes. Unlike the grocery stores in the US, they are sold here with the full stalk attached at most markets, and after paring the outside of the stem or stalk, it canÂ also be cooked and eaten. 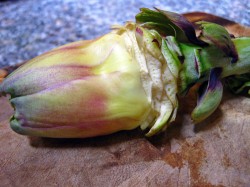 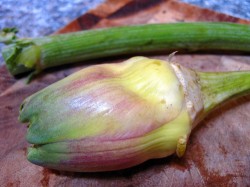 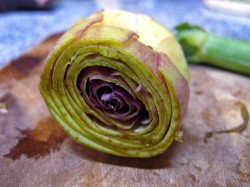 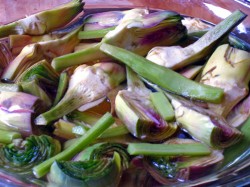 …before cutting off the top 1/3 of the leaf tips. We then sliced them in half from top to bottom, checked to see if the choke needed to be removed (these were very young and the choke nearly nonexistent, so we left the base intact), before submerging them in vinegar water to keep them from turning brown. 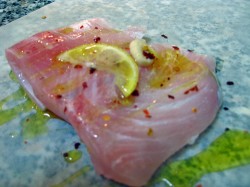 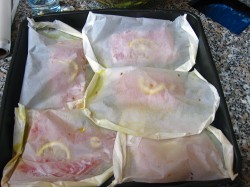 Everyone prepared their own fish packet for lunch – a little olive oil, the fish filet (basic flaky white fish), some more oil, a sprinkle of salt and red pepper flakes, a small piece of lemon, and a sliver of garlic, which was then wrapped tightly in parchment paper (or use foil) for baking. 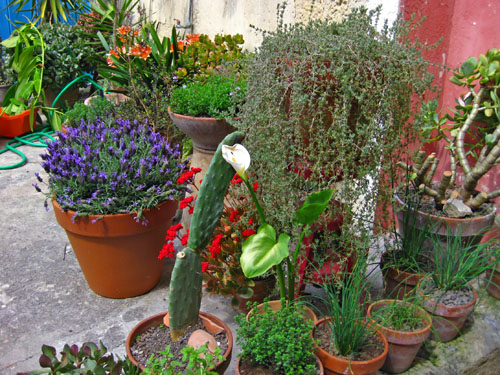 After visiting the garden to snip mint for the dishes and with the bulk of the preparation behind us, we sat down to lunch in the dining room while one or two of the women prepared the first course of mussels, cooked simply in a large portion of white wine (the mussels from the Ionian area are very briny and the wine dilutes that saltiness while adding acidity) with mint and red pepper flakes. 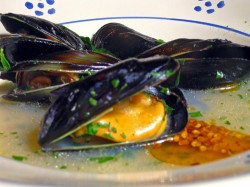 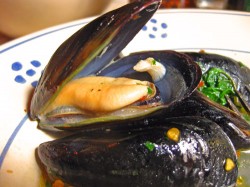 The mussels were so plump, which we learned was a sign that they grew in very nutrient rich waters, and contained no sandiness at all – paired with hunks of Lucaâ€™s bread for soaking up the juices, it was a great first course. 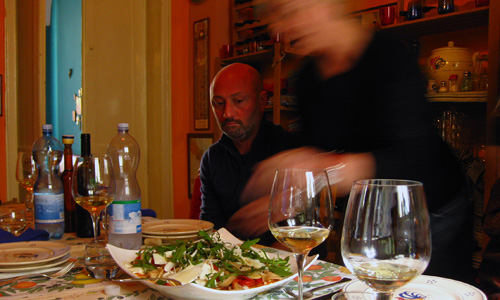 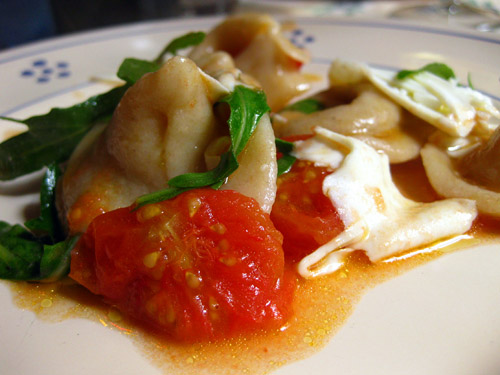 The pasta course followed – those Mexican hats we made tossed with cherry tomatoes, arugula and slices of the aged ricotta cheese. This is a really fresh tasting pasta dish, and might be my favorite of the week long program. Although given I have pasta every day here in Italy (something I can’t even imagine attempting in the US without gaining a boatload of weight), it’s really hard to pick one! 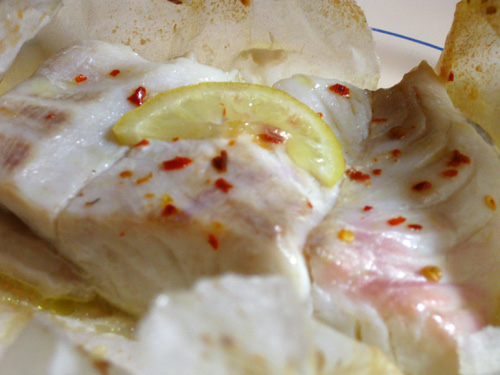 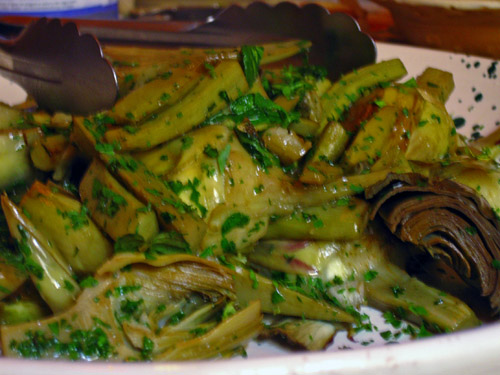 Next came our fish, delicate and flaky when we opened up our packet, accompanied by the artichokes which were steamed and flavored with olive oil and mint. 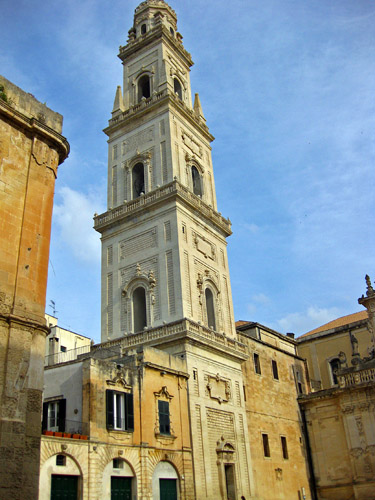 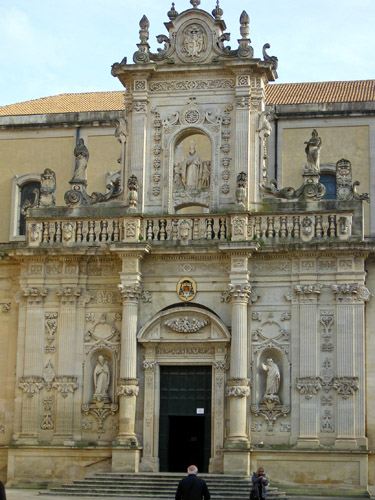 After lunches at the school, there is time before the evening lesson and meal (Silvestro almost always takes a nap in between) and the group was left to sleep, read, shop, or wander through the lovely city before reuniting to visit the wine shop on the way to the school for dinner. 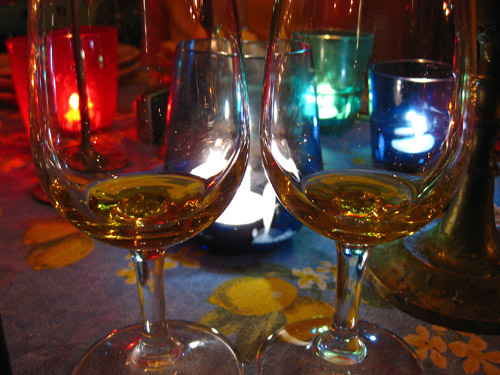 There was only a small amount of preparation as a group in the kitchen – cutting some parsley, mixing stuffing for peppers, wilting the peppers – and we sat down to the table rather quickly to begin an olive oil tasting. We compared the light cellina olive oil with the much spicier ogliarola oil. Proper olive oil tasting doesnâ€™t involved bread dipping, but rather â€œhuffingâ€ the oil into the back of the throat in a quick inhalation to let it hit your throat. This, of course, is only doneÂ after you warm it in your glass and take in the aromas much like sniffing a glass of wine. 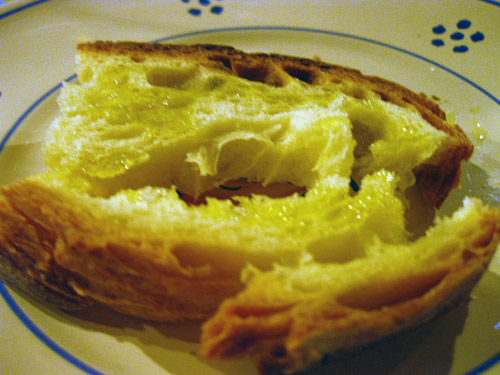 As we drizzled our favorite on bruschetta (simply the toasted bread from Luca – and remember, that “ch” means it’s pronounced like a “k”) and nibbled… 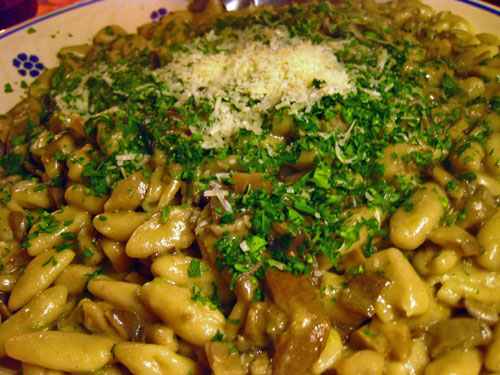 …some of the group cooked our dinner of the cavatelli pasta we had made tossed with mushrooms (that seemed similar to oyster mushrooms in the US), parsley and Parmigiano (which is really of Emilia Romagna, but now thought of almost like the national cheese ofÂ Italy). 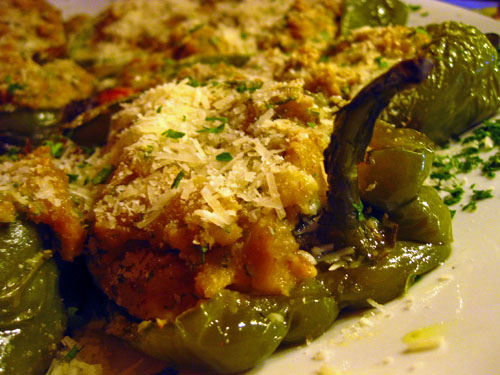 Our secondo was a mild long green pepper that had been wilted then stuffed with a meatless combination of bread crumbs, Parmigiano, eggs, parsley, salt, pepper and milk, then baked to perfection and served with the leftover artichokes from lunch. The stuffing is just like Silvestro’s meatloaf stuffing, minus the meat, which honestly wasn’t missed in this vegetarian dinner. 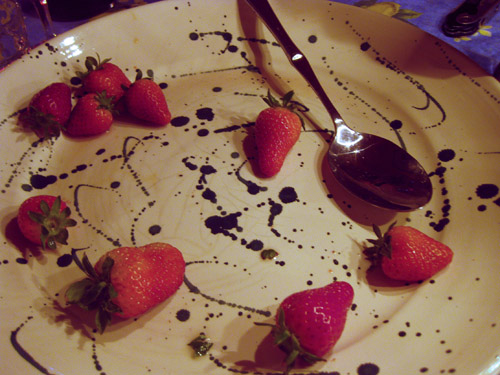 For dessert we enjoyed the most sweet and perfectly ripe (itâ€™s all about eating in season!) strawberries which we dipped in vin cotto – meaning cooked wine, but actually a cooked and reduced grape juice that has a texture and taste a little bit like aged balsamic mixed with a touch of prune juice. Silvestro paired his house Primitivo with the meal, and we drank a Primitivo dessert wine with the berries that tasted almost like a port. And with those very full bellies, we hit the sack to rest up for a tour of the city tomorrow morning.