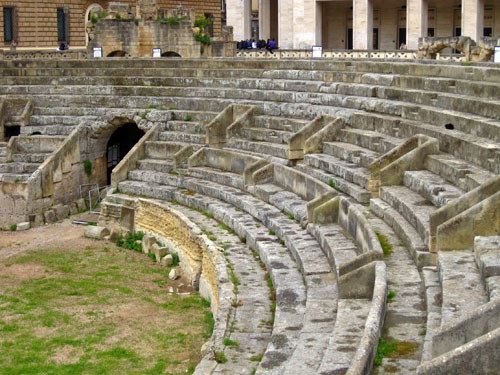 There must be something cursed about â€œtour dayâ€ when I bring folks to Lecce. Last year it poured rain like a monsoon and we could barely eek out an hourâ€™s worth of ducking into cover as Timothy tried to show us the sights. This year his lovely wife Simona took the lead, and although not a monsoon, we still had clouds and drizzle. We powered on, though, because seeing Lecce in all of its baroque glory is one of the highlights of coming to school here. We began at the Roman amphitheater, which they say would have seated 15,000 or so for plays, gladiators, and more. 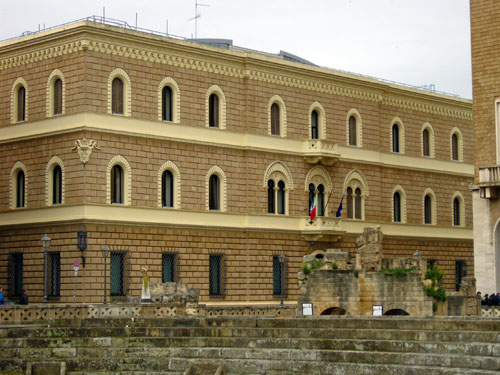 It was uncovered when the main bank of Italy was digging to place the foundation for this building across the street from the square, and the monument to St. Oronzo (he bumped off the previous St. Irene after it was thought he was able to cure the plague and more in this part of the world) was moved back to allow the excavation. 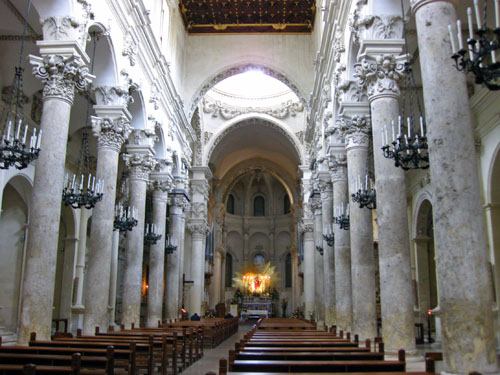 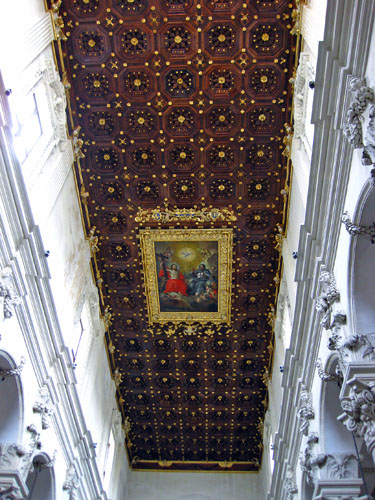 From the square we made our way outside what would have originally been the wall of the city to the former Jewish area to see the magnificent Santa Croce church. Itâ€™s overwhelming in the intricacy of its baroque faÃ§ade, but even more fascinating is a quick education about the symbols and allegories it contains. In a nutshell, humans and earth are represented in figures on the bottom, the higher powers of god and the church, and in the middle is a balcony representing the popeâ€™s victory over the Turks, including animal symbols for important aspects of Italian history. Two women, justice and charity, tower over each corner. Inside the baroque style continues, and the church contains some of the famous paperÂ machier statues of the region which would easily be confused with carved stone. 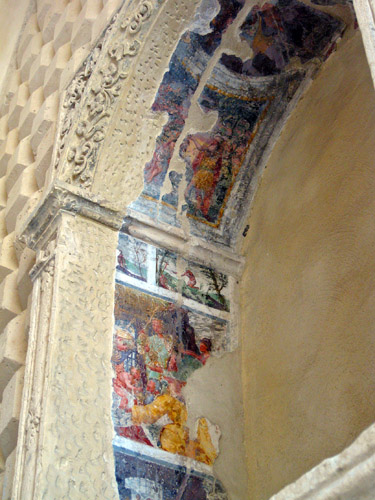 From Santa Croce we wandered back through town to the cathedral in the center of town, dipping inside in time to escape some of the rain and to hear the organs tuned up as a woman practiced singing for an upcoming wedding (May is a big wedding season here). We bid arrivederci to Simona, asking her to join us for dinner one evening this week, and made our way to Silvestroâ€™s for lunch, which he and Giuseppe prepared for us since we were out touring. 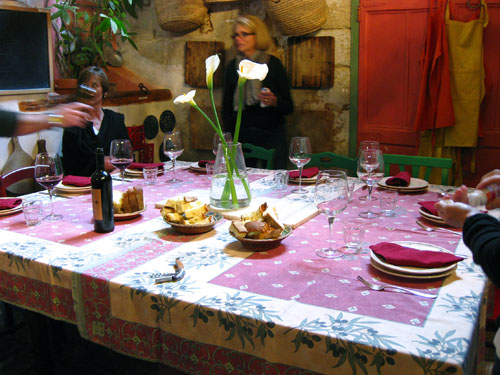 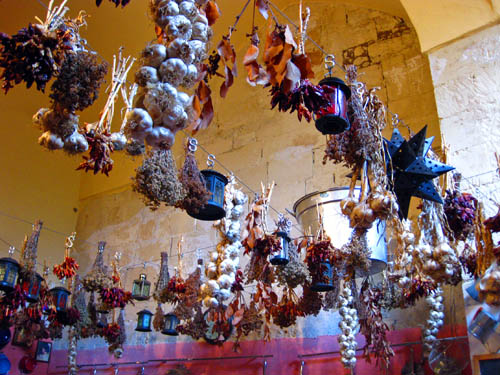 There is something magical about the kitchen of The Awaiting Table school, and it was warm and homey for lunch on a rainy day. We began by tasting a susumanielo wine, an old one of this region thatâ€™s been revived and a new one for me. 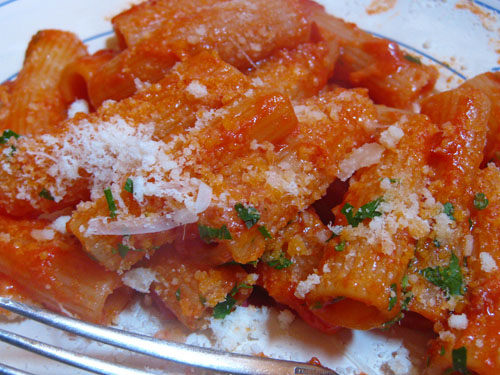 It paired really well with a simple pasta dish with a tomato and sausage sauce topped with some Parmigiano. 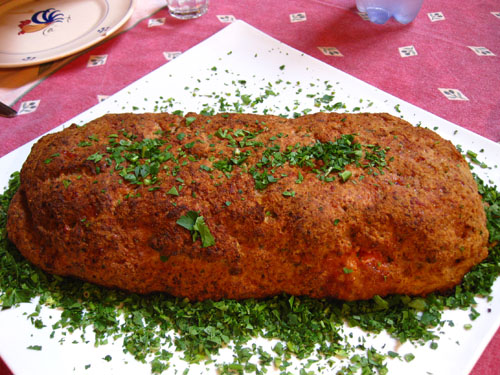 From there, on to the meatloaf, a favorite of the last group I brought here. While it looks hideous – anyone ever see a really pretty picture of a meatloaf??? – it tasted heavenly. It uses 2 parts bread crumb mixture (essentially the same mix of bread crumbs, cheese, milk, parsley that we stuffed the peppers with last night) for every 1 part beef and 1 part pork. 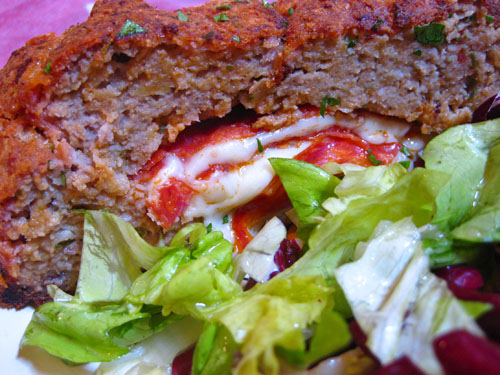 The beef and pork are double ground together and that combined with the milk creates a very velvety texture. Silvestro stuffs it with both smoked and plain scamorza cheeses and some spicy Italian sliced salami. Although I shouldnâ€™t, I ate a huge piece along with a simple tossed salad. 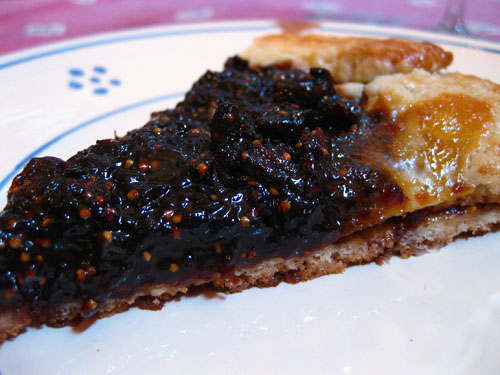 Dessert, which I usually am not really into, was a fig tart that tasted like a really upscale kind of hot fig newton. Who can say no to that? I didnâ€™t. I returned to the room intent on taking a nap after so much wine and food at lunch, but thought better of it (afraid I’d sleep right through the evening meal) and instead walked through the small new part of town outside the walls. 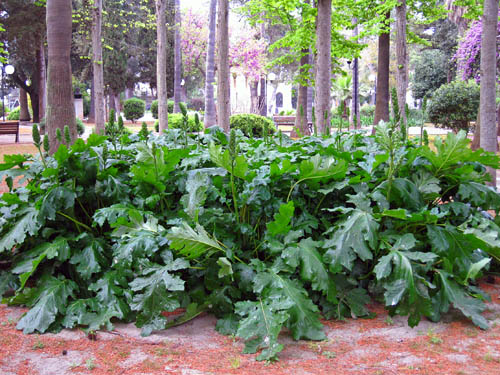 The park is tranquil to say the least, and filled with the aromatic blossoms of spring, actually quite a treat. 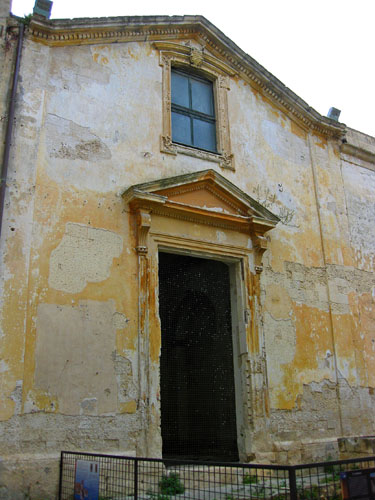 I also ventured into the old castle on the egde of town – while not all that architecturally interesting, it was good to find something new I had missed last time. 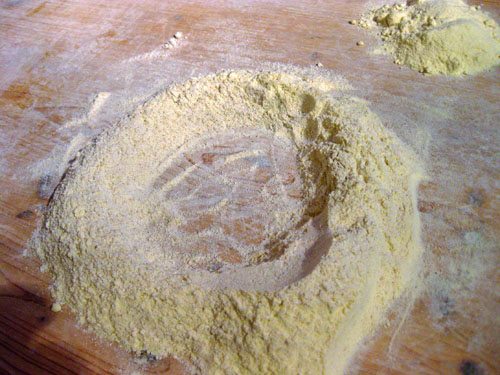 The group reunited to make dinner, beginning with pasta, but this time a simpler rolled and cut pasta to be used in the ceci e foglie, chickpeas and vegetable soup. 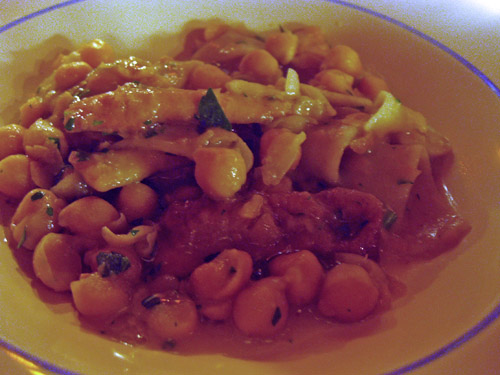 In this classic dish of Puglia, some of the pasta is fried so that when it’s added to the soup it takes on the texture of meat, something to fill in for meat in leaner times. 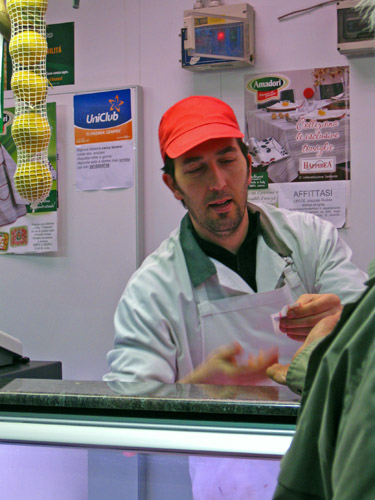 Honestly, I think the group could have made a full meal out of this hearty first course, but we managed our way through a rabbit fricasse type of dish. The butchers atÂ the local market specialize in certain types of meat, and this dead-ringer for Nicholas Cage (“Get me the big knife!”) had cut the rabbit for us into individual pieces. 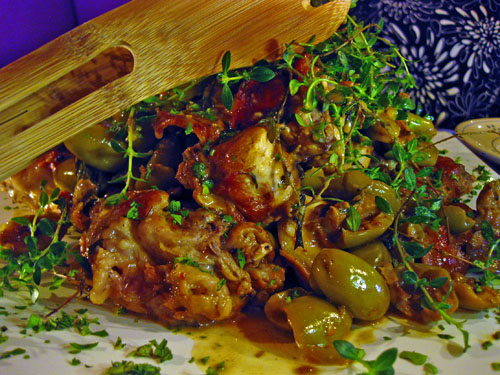 WeÂ seared the rabbitÂ quite brown in olive oil then simmered with olives and thyme and white wine. 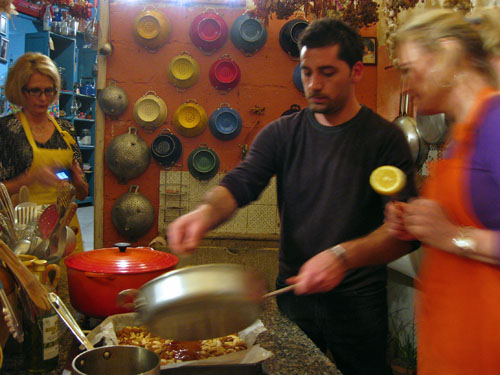 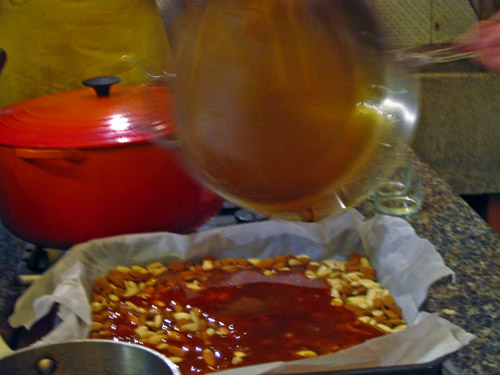 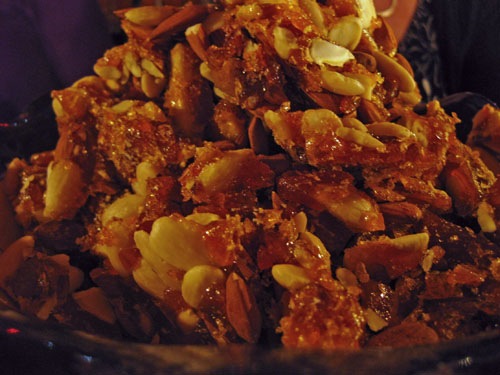 For dessert, one of the women worked with Gieuseppe to create a very simple almond brittle – caramelized sugar drizzled over whole almonds. Simple, but addictive! The wine tonight was perhaps the most famous of the region, Salice Salentino. It was produced by Cantele, whom you can easily find in the US and elsewhere, and it was really appreciated by all. 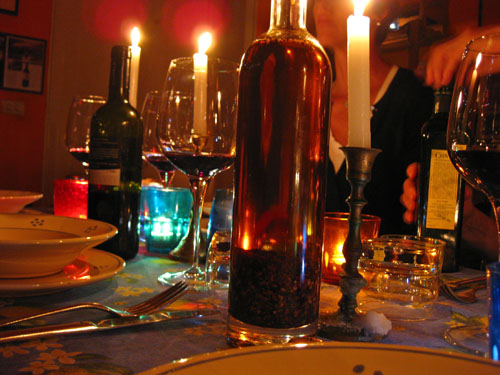 As the evenings get later, we drift to funny conversations – slang expressions of the region (thank you, Laura, for facilitating the translations!), cultural differences, who we think Silvestro should date, whether itâ€™s time for Giuseppe to get married and more. Itâ€™s a special thing to feel our differences fade as we learn just how much we share, and itâ€™s really the best part of coming to cooking school in a â€œnon-touristyâ€ region like Puglia. A domani!