One of the nicer things to do while you are on a cruise ship is to enjoy the ship when most everyone else is ashore. We slept in again, then I had a lovely 4 mile walk on the promenade deck before meeting Greg for lunch (hamburger and fries) in the main dining room. 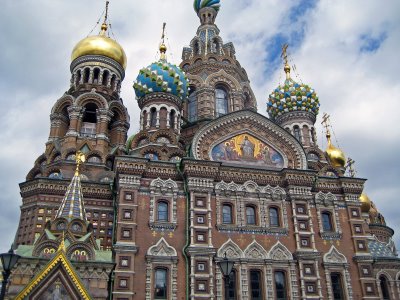 After lunch we left for a tour of St. Petersburg that started at the Church on Spilled Blood, so named because it was built on the spot where Tsar Alexander II was assassinated in 1881. The church was finished in 1907 and reopened in 1998 after 20 years of restoration. 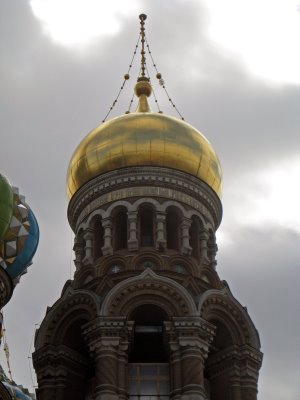 The inside of the church is floor to ceiling mosaics in every color and type of stone or mineral you can imagine. The traditional Russian style is unusual for St. Petersburg where Peter the Great designed a city to rival the most beautiful European cities and tossed aside any ideas of traditional Russian design. 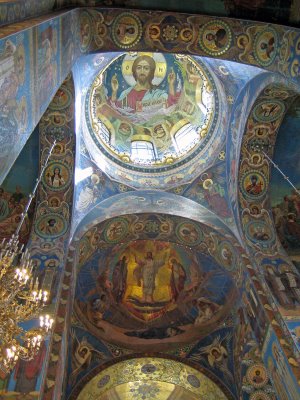 After our tour of the church, we boarded a canal cruise to wind through the city. St. Petersburg is often called the Venice of the North, and the tour showed the beauty of the buildings and design of the city. Peter the Great insisted that all of the buildings be painted in bright colors in an effort to keep people cheerful in a city that much of the year is dark and snowy. 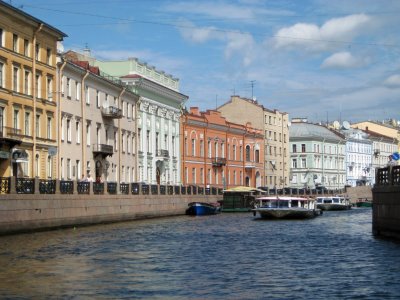 The canal tour also took us out into the main harbor where we could see a great view of the Cathedral of Saints Peter and Paul. 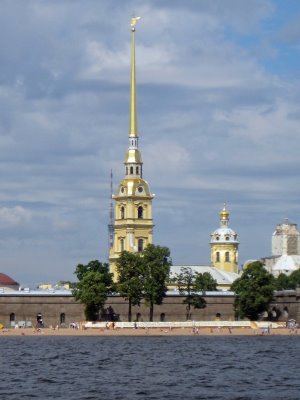 This Russian kid followed our cruise for an hour – he would run from bridge to bridge and be there to wave to us as we passed under, and we figured he easily put in 6 or more miles running that day. He met us when we got off the boat, and you can imagine we were all so impressed that he made a bundle in tips. 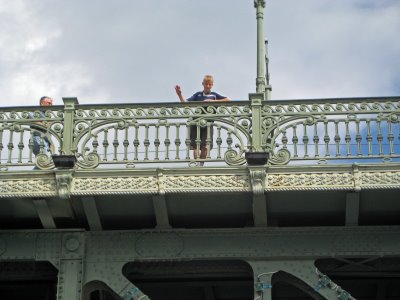 Everywhere we went in the Baltics during our trip we saw weddings. Because the season of warmth and sunlight is to short, everyone marries during this time, and we saw more than one young groom carrying his future wife across a bridge, which is considered to bring good luck to the marriage in Russia. 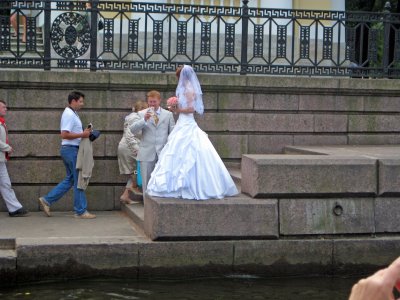 From much of the city you can see the enormous dome of St. Isaac’s Cathedral. I read that 100 kg of gold leaf were used to cover the dome. 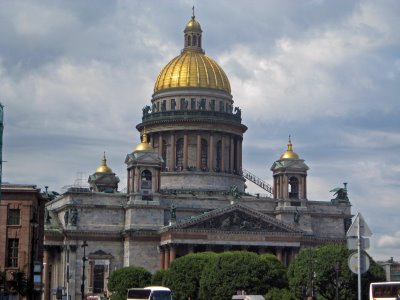 After our canal tour we stopped at a shop named, of all things, Red October, where the group shopped for tourist souvenirs. The store was filled with the ubiquitous Russian souvenirs: Faberge-style eggs, lacquered boxes, and nesting dolls. I didn’t really need any of these things, so purchased only a couple of egg Christmas ornaments for friends before heading back to the ship to get ready for dinner. 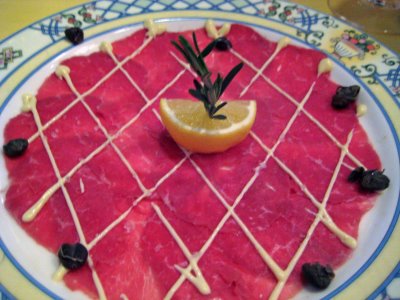 Greg and I had another date night on the ship and dined alone at Prego, the Italian restaurant on the ship. I began my meal with beef carpaccio followed by an arugula salad and the cream of mushroom soup that is totally decadent and served in a bread bowl.

Next I sampled some of Greg’s lasagna before tearing into my own rack of lamb served with mashed potatoes. I was so excited to eat it I forgot to photograph it until I was finished – so here you have the remains! 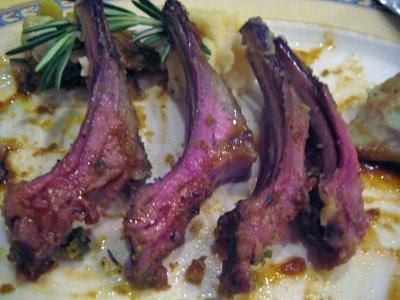 I was entirely too full for dessert, but managed to fit in a bit of these wafer thin biscotti before retiring for the night. 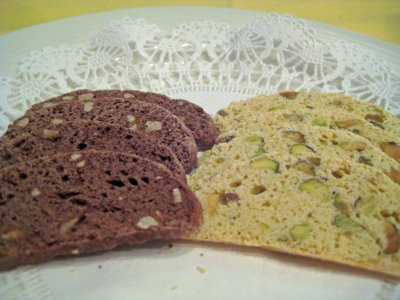