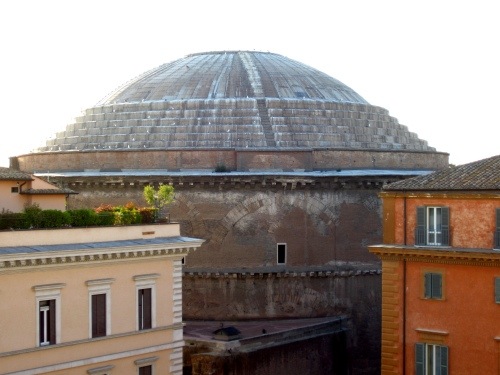 I come to Rome often, usually at least once a year, and it is without a doubt my favorite city in the world. It might be hot (like last week when it was in the 90s), it’s usually full of bustling crowds (especially during the holy weeks when nuns and priests flock to their holy city or summer months when families arrive in droves), but it’s always exciting and beautiful to me. Going on your first trip to Rome? Here’s my insider’s guide to where to stay, what to do, and what not to miss. 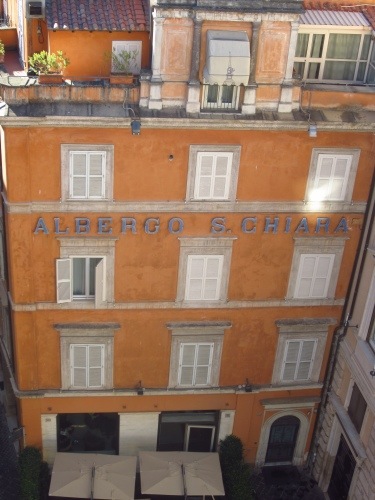 Where to Stay – Albergo Santa Chiara – it’s centrally located right near the Pantheon so that you can walk to just about everything fairly easily. Head north to the Via Veneto, Spanish Steps and Piazza del Popolo, west to Vatican City and Castle Sant Angelo, south to Campo dei Fiori, Trastevere, Piazza Venezia and the ancient city, and east to the Trevi Fountain. The rooms, although small like most European cities, are fairly recently remodeled with wood floors and nice bedding, and there is a large breakfast room with a full breakfast included. The lobby lounge and outside patio are nice and they’ll fix you a drink from the bar whenever you want one. If you reserve with them, please do tell them I sent you. 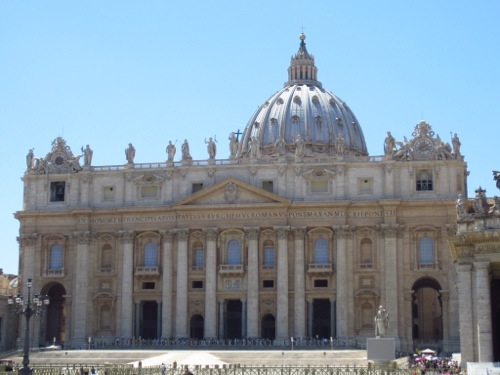 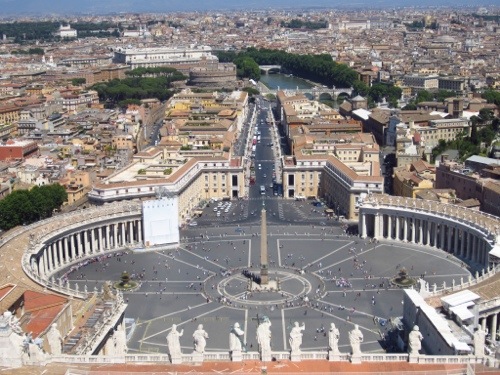 St. Peter’s Basilica – if you want to go inside the Vatican museums, which include the Sistine Chapel with the fresco ceiling painted by Michelangelo, arrange for a guide so that you don’t have to wait for hours in line. If you are skipping the museums, you can also skip the guide (in my opinion). Instead, purchase a ticket to climb to the cupola of the church for views over the entire Vatican City, as well as Rome beyond. 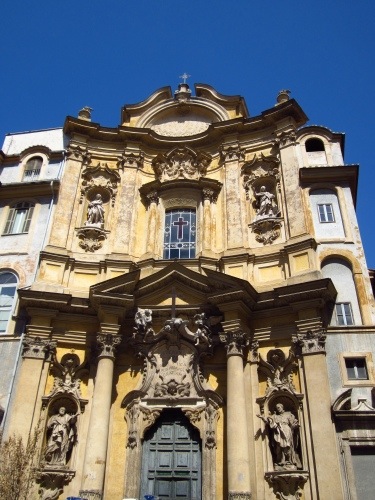 Churches – they are everywhere in Rome. Some are lovely from the outside, like this one right near the Pantheon. But some, like the church of San Luigi dei Francesi, also house famous paintings by artists like Caravaggio. And then there is the crypt under the church on the Via Veneto that’s filled with the bones from the deceased Capuchin monks. With so many to choose from, read up on the Internet before your trip to see which ones you are interested in visiting. 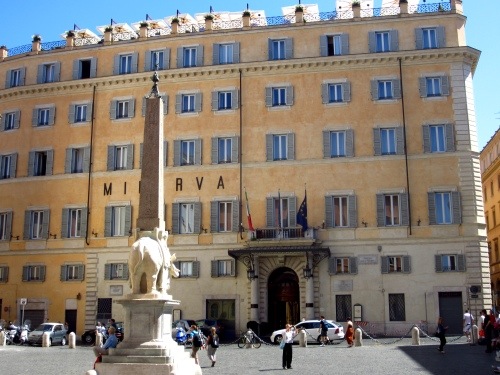 Statues and Fancy Hotels – I like to stay at the Albergo Santa Chiara, which is right behind the Pantheon and just next to the Hotel Minerva (above). You don’t need to be staying at the Minerva (with Minerva prices) to head up to the rooftop bar (in season) for a cocktail and views (the top photo of the Pantheon dome). The Hotel Rafael just on the western side of the Piazza Navona also has a rooftop bar and restaurant with views both southeast to the ancient city and west to the Vatican.

As for sculptures and statues and fountains, they are all over Rome, making the city a sort of outdoor museum. Everywhere you go, you’ll find art like this Bernini sculpture and obelisk, so make sure you walk instead of taking taxis in order to maximize your viewing. Also, you should know that all of the small fountains you see spouting water are drinkable unless marked otherwise. You just hold your finger under the spigot and a stream will shoot out the top like a drinking fountain. Cool, right? 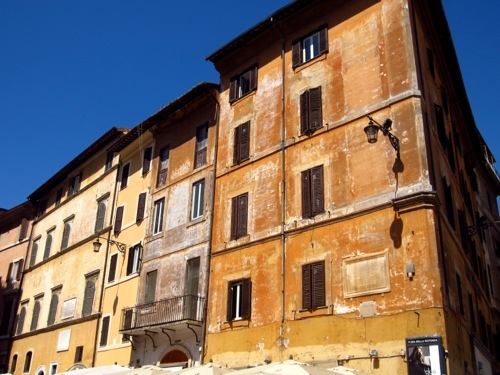 Lovely Color-Washed Old Buildings – they are everywhere and they are beautiful in an aged sort of way. Make sure to look up from your map so you don’t miss the lovely views as you wind around the tiny streets in the centro storico. 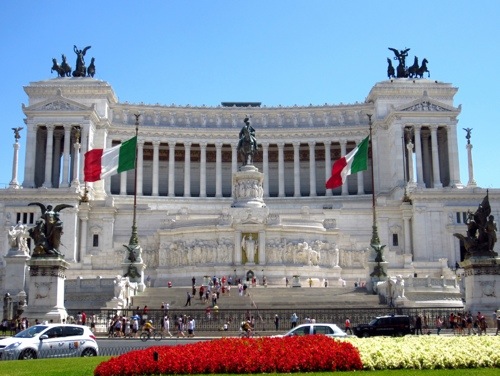 Piazza Venezia – this is the monument to Vittorio Emanuele which sits across the street from where Mussolini stayed. The monument reminds me that it has only been 150 years that Italy has been a unified country. So although the Roman empire was ancient, modern Italy is quite new, politically. 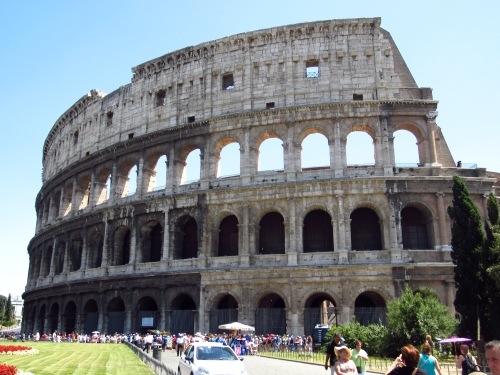 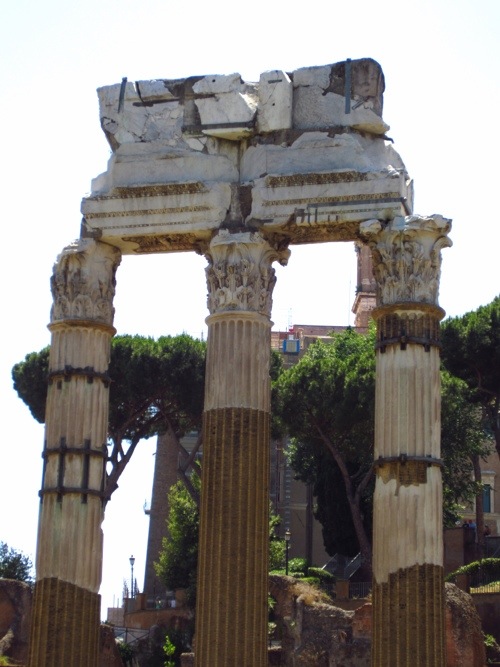 Ancient Rome – the headset tour at the Colisseum is great and relieves the need to hire a guide. The Forum, with very little still intact, as well as the Palatine Hill, home to the Emperors of ancient Rome, are both better seen, in my opinion, with a guide. Be sure to take a look at the relief maps on the walls leading up to the area to really appreciate how vast the Roman Empire once was. 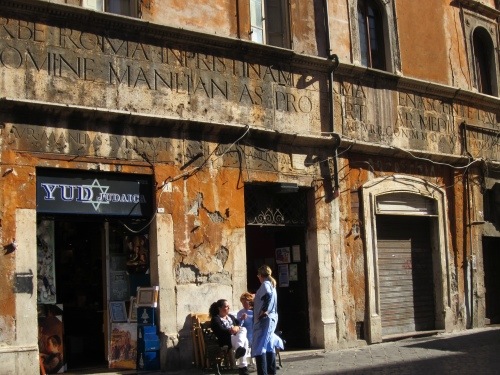 The Jewish Ghetto – the culinary roots of Roman cuisine are in many ways tied to the Jewish history of Rome, plus the entire area and history is just interesting to learn about. Best to see this with a guide who can really fill you in as today there are only a few visible reminders of the vast history. 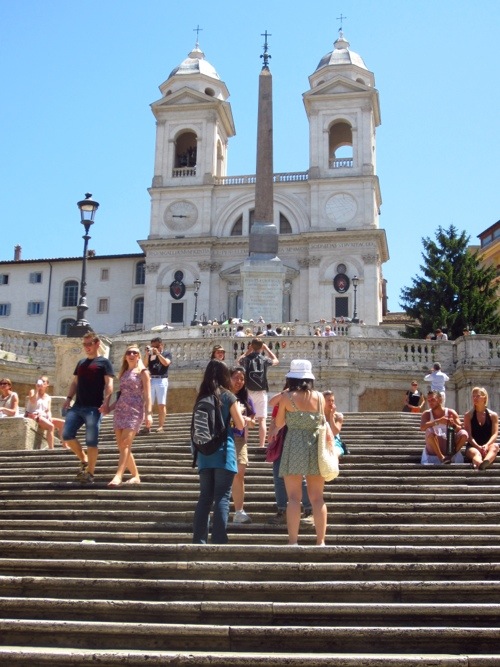 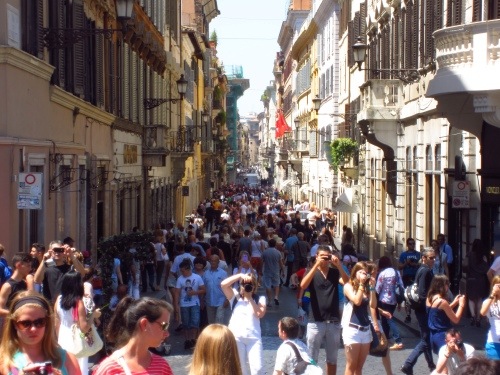 The Spanish Steps and the Via Condotti – the steps are an iconic sight in Rome, and weather permitting are usually filled with people hanging out. Come north on Via Sistina so that you are entering the steps from the top for a view down, then end at Piazza di Spagna and the fountain at the bottom. From here you enter into the very expensive designer shopping street Via Condotti which is fun to see, if only to window shop. 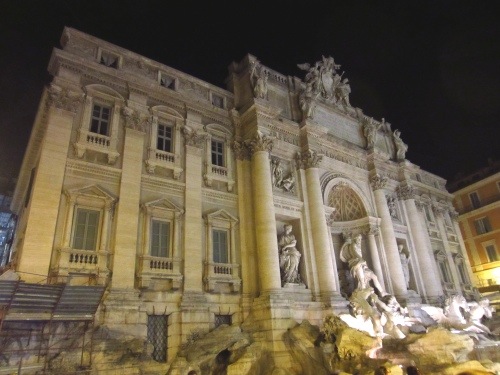 The Trevi Fountain – it’s crowded (and lovely) whether you are there during the day or at night. Either way, make sure to throw a coin backwards over your should to ensure a return visit. 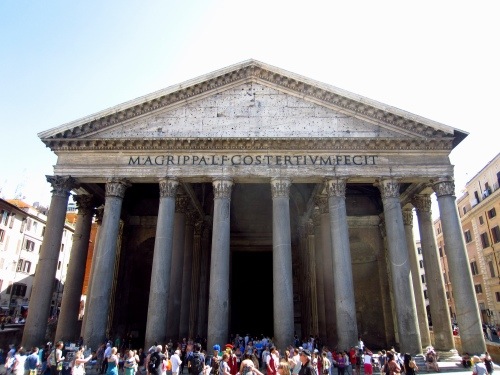 The Pantheon and Piazza Della Rotunda – the Pantheon, whose dome is still the largest unformed concrete dome in the world, has an open oculus in the ceiling and has served many functions – both religious and not – over the years. It remains one of the best preserved structures from its time in the world, dating back to Hadrian’s rule,126 AD. It fills one side of my favorite piazza in Rome, the Piazza Della Rotunda. 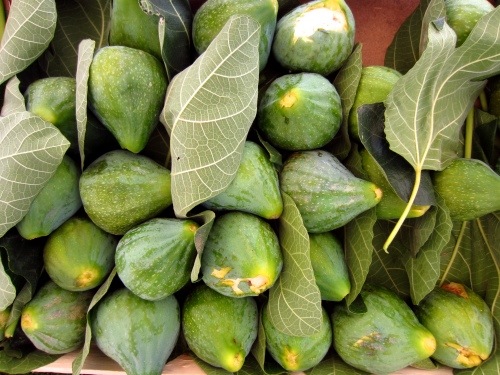 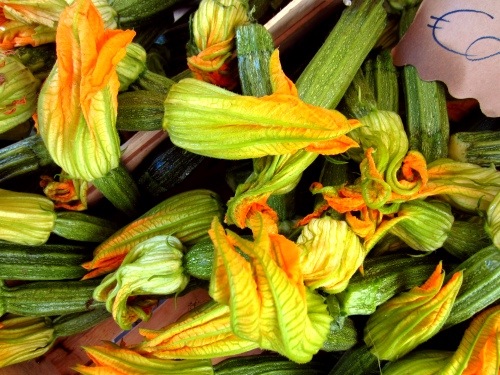 Seasonal Foods – in summer, like my visit, you’ll find menus filled with zucchini and fig dishes. Regardless of what time of year you go, Italians eat with the seasons, so go with the flow and eat what’s fresh when you are here. You won’t be sorry. 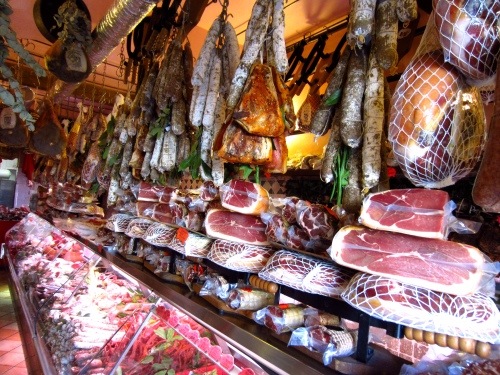 Salumerias – these wonderful meat shops in Italy are filled with everything from soppresata to prosciutto, and sometimes offer small tastes. Buy a few slices of something – anything really – and nibble as you walk along. 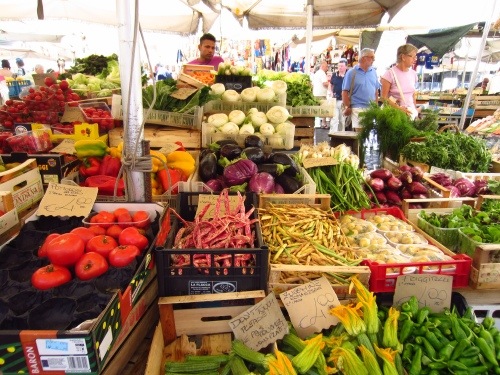 Campo dei Fiori Market – it runs every day except Sunday until about 1:00, and it’s filled with local produce. Don’t be sucked into buying the touristy oils, colored pastas, and other gift items as they aren’t the best quality here in the market. Look instead to specialty shops for making these purchases. 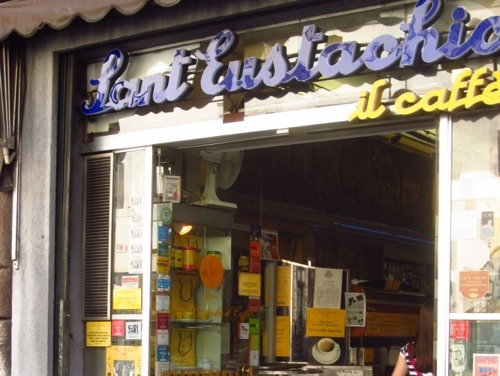 Sant Eustachio Coffee – it is right near the Albergo Santa Chiara and is rather famous. They also have wonderful coffee and other coffee related food and gift items that may great gifts to bring home to friends and family. 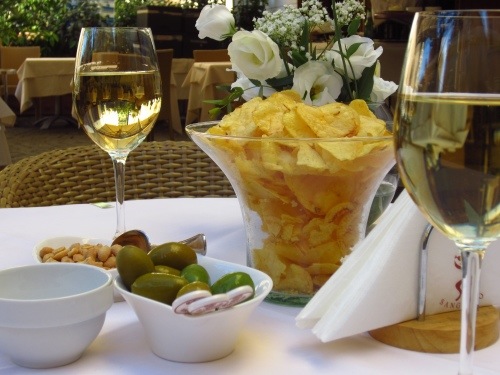 An Drink at a Nice Bar or Restaurant – in Italy, the pricier the drink, the more snacks they bring you to go with it. Treat yourself to a relatively nice glass of wine or an aperitif and enjoys the food as you savor your drink. 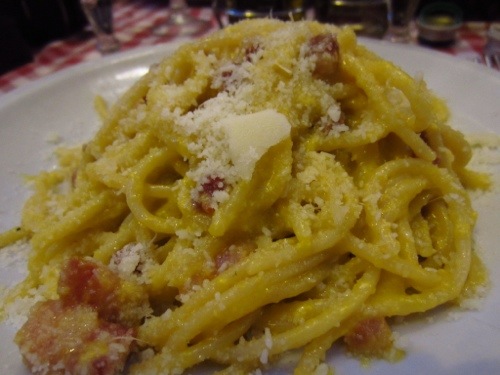 Pasta!!! There are many dishes that Rome is known for, but my favorite is Spaghetti Carbonara with a sauce made creamy with egg yolks (not heavy cream) and dotted with crispy pancetta pieces. I promise you you’ll crave it for the rest of your life after your first taste!