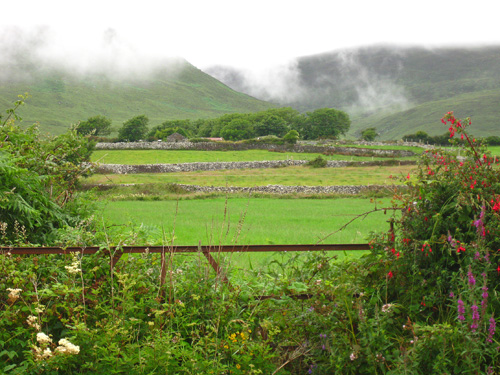 Now this is what I thought Ireland would be like. Incredibly picturesque little farms, each field divided by a tiny stone wall, with rain hanging over everything. 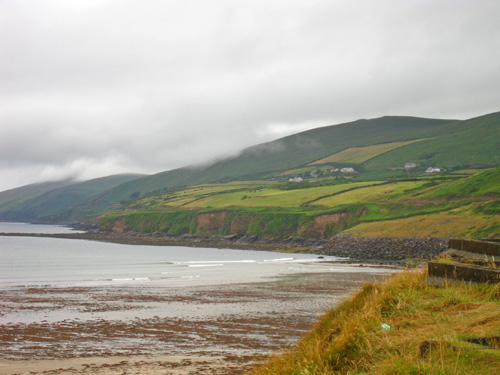 We made our way out of Kilarney this morning on the tiny back road along the coast of the Dingle Peninsula. I imagine during a sunny day it’s spectacular. During a rainy day it’s sort of raw and imposing, but still gorgeous. 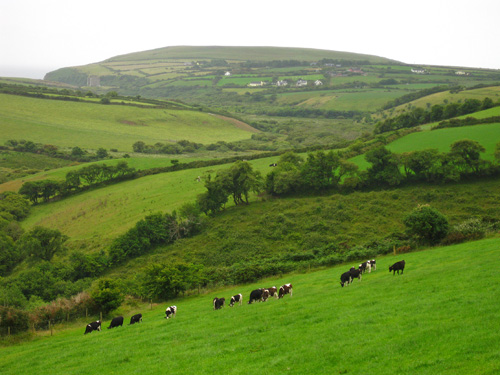 The drive took us from the coastline, weaving through scenic valleys like this one that had cows grazing in some farms… 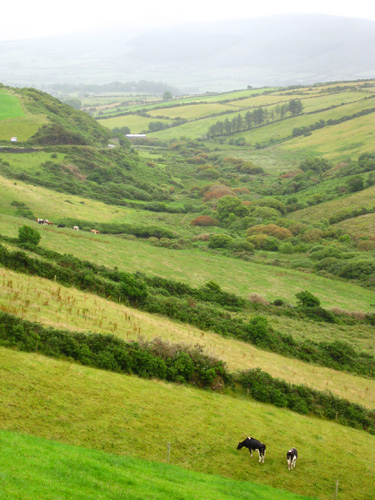 …and sheep just about everywhere you can imagine. 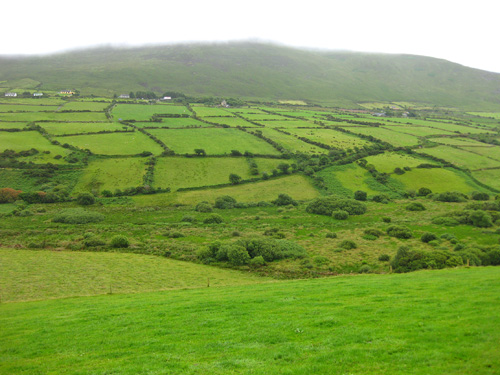 The patchwork quilt of farms does look like a stained glass window, as my friend Suzanne pointed out. 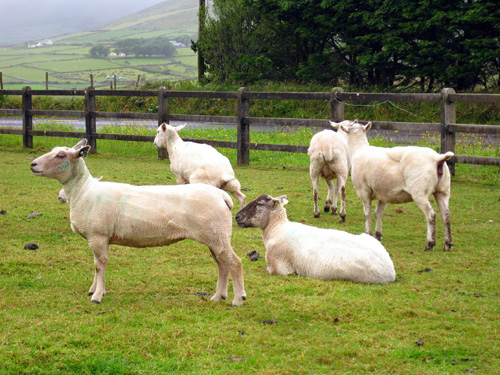 And despite the multitudes of sheep we’ve passed on our drive, this small herd was the first we could get close enough to for a snapshot. 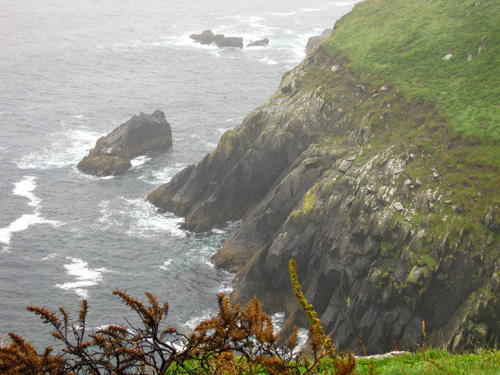 Most people stop their tour of the peninsula in the cute town of Dingle, but the real beauty lies beyond in the small loop that circles the very end of the tip of the peninsula. Rocks and greenery flow down to the sea from high above until you finally reach the very southernmost tip, where only a small foot-high rock wall keeps you on the barely 8 foot wide road. 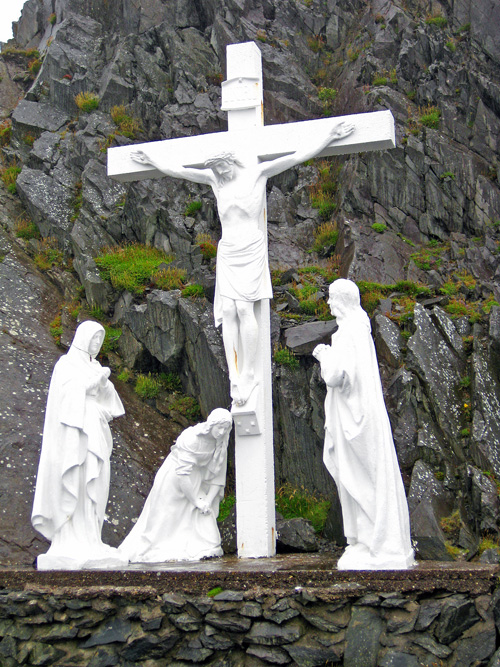 No wonder someone had the idea of placing this larger-than-life sized crucifix at the point – even a non-believer finds himself doing a little sign of the cross around the corners. 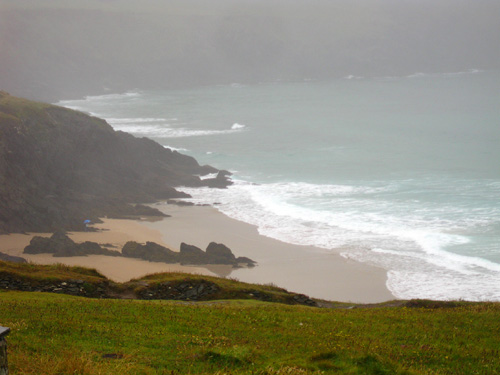 Dotted along this coast are some sandy beaches that I can imagine are really inviting on a nice day, but today just seemed bone chilling, even though at one point we did see surfers out in the Atlantic. 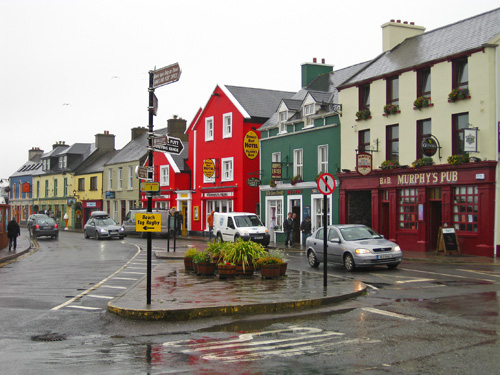 So we passed up the beaches to head into the town of Dingle itself to Murphy’s Pub for lunch. Every town in Ireland seems to have a Murphy’s, a Foley’s, and an O’Leary’s or an O’Somethings! 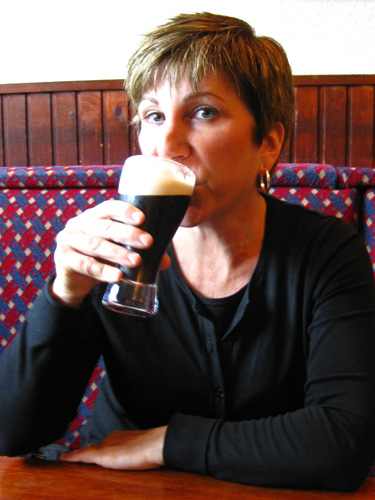 I figured a traditional Irish pub on a Saturday was as good a time as any to sample my first Guinness, and I was surprised to find that it’s served cold and that I indeed like it. It helped wash down my lunch of mussels, salad, brown bread and Irish butter which I was too hungry to photograph. 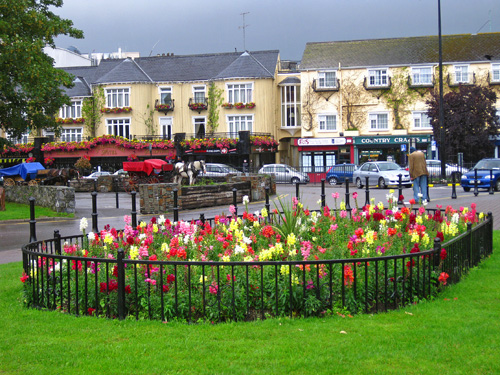 After lunch we drove back to Kilarney where I tucked my parents in for a nap before walking the short way into the main part of town. Kilarney is often criticized as a tourist town, but it’s cute to boot. 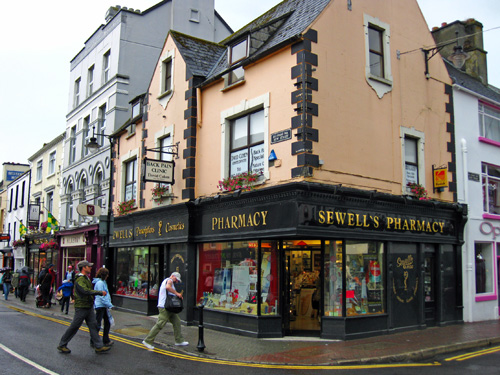 The corner pharmacy looks just like you would expect it to. 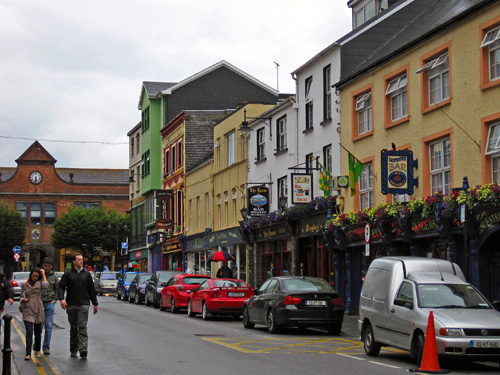 And every stretch of the main streets in town has this sort of storybook Irish charm. Call me a tourist – I find it fun. 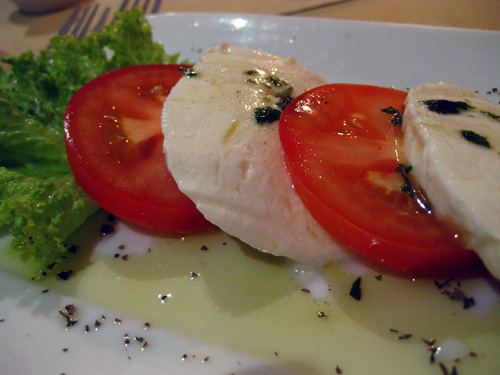 We decided on a break from traditional Irish pub food so made our way to Robertino’s for some classic Italian cuisine, starting with an Insalata Caprese for me… 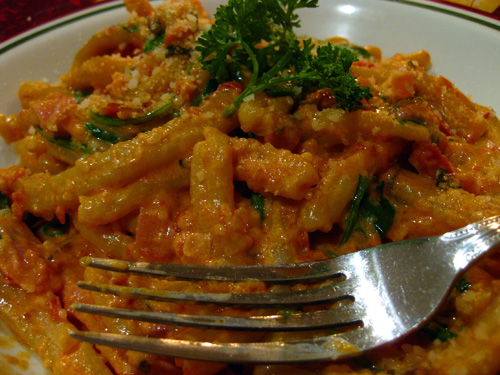 …followed by a pasta dish with a creamy tomato and mascarpone cheese sauce with speck. 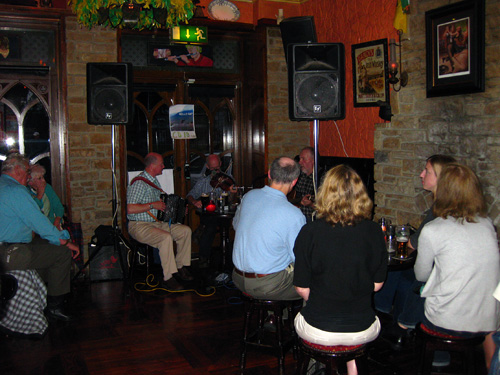 After I returned my parents to the hotel (and after I drove back to the restaurant to get my dad’s coat), I snuck out for a true Irish pub experience. Yes snuck out – remember a few nights ago when I made the huge mistake of saying I was going out for a bit and my mom panicked? Won’t make that mistake again while I’m here! Now I just put them to bed, then leave contact information at the front desk in case of emergency. I made the short walk into town to the first pub with Irish musicians, and squeezed my way to the back to order a pint of Guinness. I won’t bore you with the details – feisty old Irish men, a bit of innocent flirting, learning what a plastic paddie is, a free beer, a not so innocent man old enough to be my dad who was a bit annoying, escaping to the front of the bar to listen to the music, sharing a chair with a woman from Spain who spoke no English but loved the music, watching the Irishmen sing all of the songs – but let me assure you it was worth the risk of getting caught out by my mom! 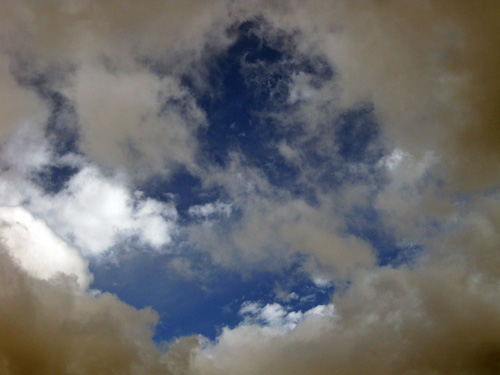 We’ve had a ridiculously wet time of it, but this small patch of blue sky offers a promise of perhaps a few nice hours of weather tomorrow as we make our way up the western coast into Doolin, just south of Galway, to visit the Cliffs of Moher. As any of you have traveled with me before know, I have a way of adapting to speaking with the accent of the country I’m visiting. It took a few days, but I’ve picked up a wee bit o’ the Irish brogue that I’m sure my husband will find annoying when I return!