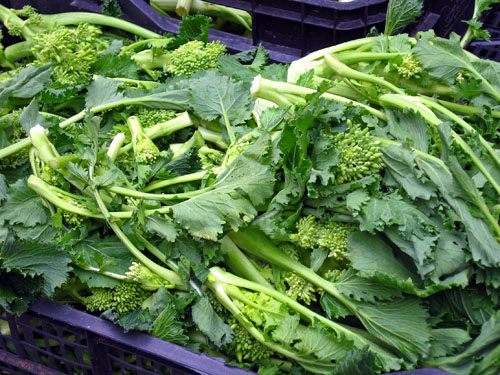 Wednesday was scheduled to be a busy day, starting with a big trip to the market for produce… 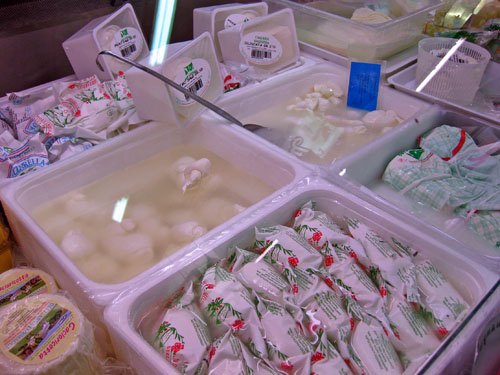 … a selection of cheeses, and wine for dinner, followed by two full rounds in the kitchen for both lunch and dinner. 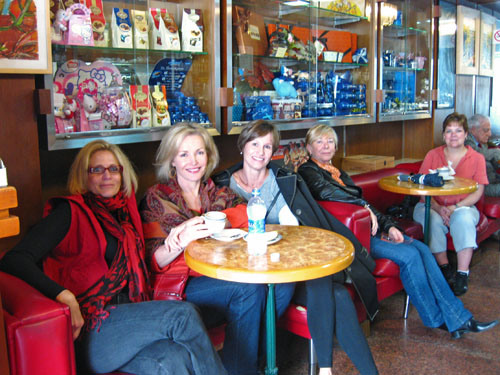 No better way to kick that off than with that morning jolt of coffee from Antonio. 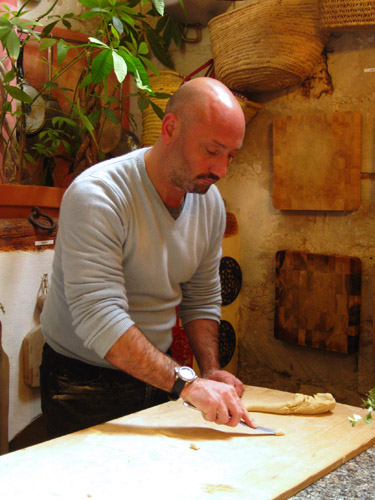 In the kitchen, we started the day with a lesson in the most difficult pasta to shape by hand, but the most classic from this region, orecchiette. The pasta shapes starts like the cavatelli from the first day, but then is opened up and inverted. 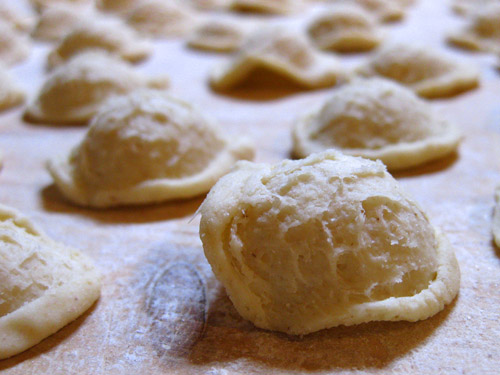 Keeping the rough edges on the surface getting a high enough dome in the shape are essential to creating a pasta that will hold the sauce. 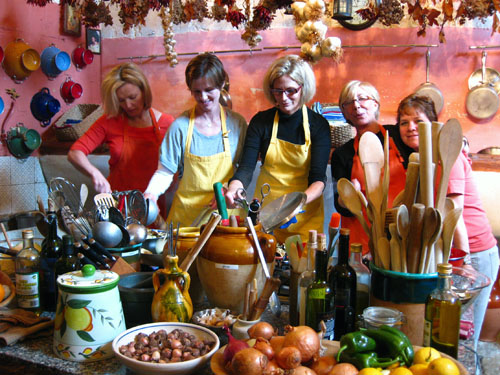 With those set up to dry for dinner, we began cooking lunch, and let me tell you that everyone was needed to prepare the large selection of vegetables for our special fave e foglie, a massive platter of assorted vegetables served room temperature with a puree made from fava beans and olive oil. 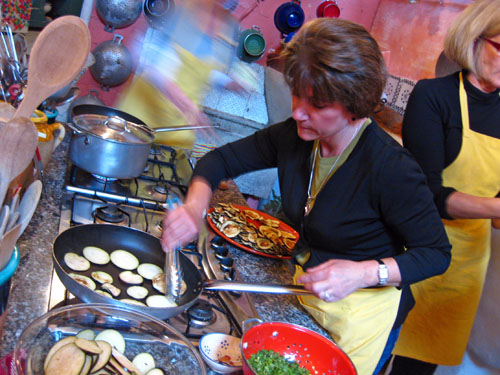 This is my very favorite way to prepare eggplant and I had completely forgotten this technique when working on the farm CSA cookbook this summer -Â sliced very thinly, cooked in a dry nonstick skillet… 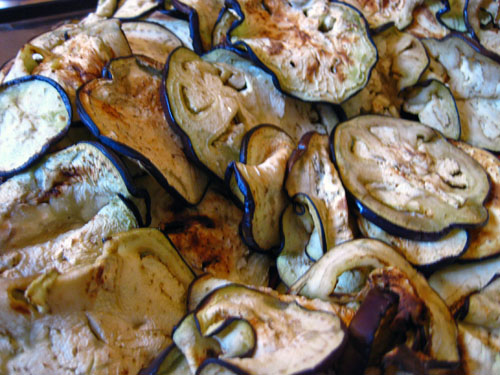 Â …until they are fully dehydrated. 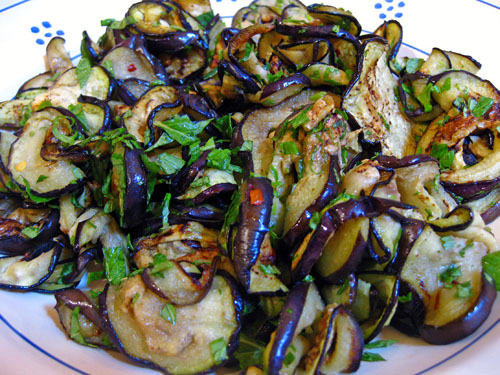 Then tossed with olive oil, mint and red pepper flakes. 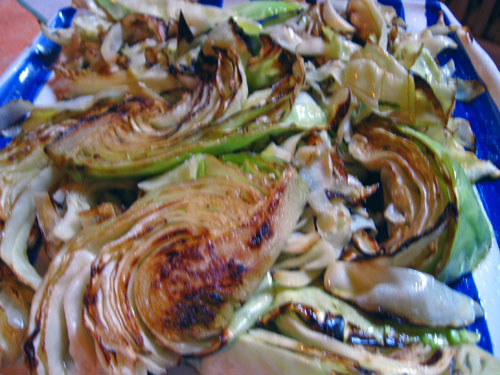 We simply cut a whole head of green cabbage into wedges and seared it in a pan with some oil until well caramelized – yet several of us in the group were swooning over it. 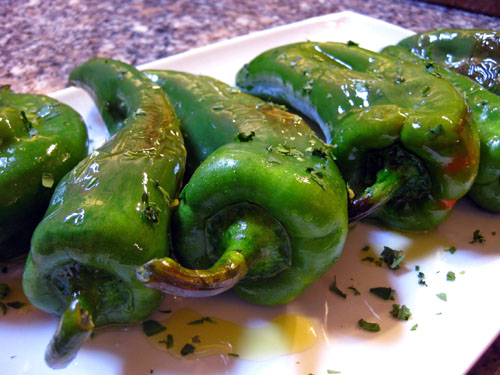 Fennel was sliced raw and tossed with lemon, olive oil and salt.Long mild green peppers were pan seared until the skin just started to char. 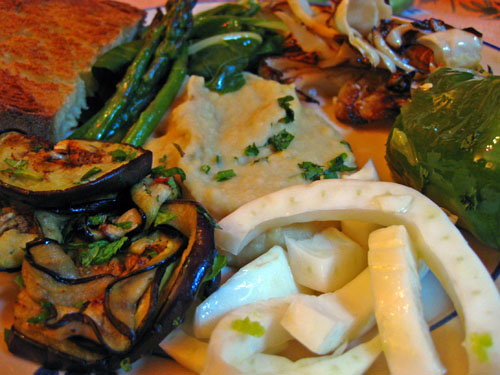 Then all of this (including some grilled asapargus and chicory) is served with the fava bean puree as a dipping sauce, paired with hunks of Lucaâ€™s wonderful bread. 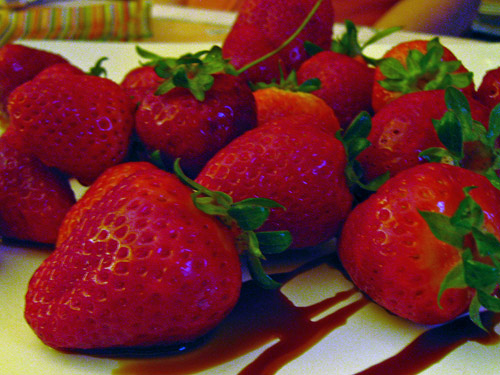 We had purchased melons for dessert but could barely eat a strawberry or two after finishing lunch. 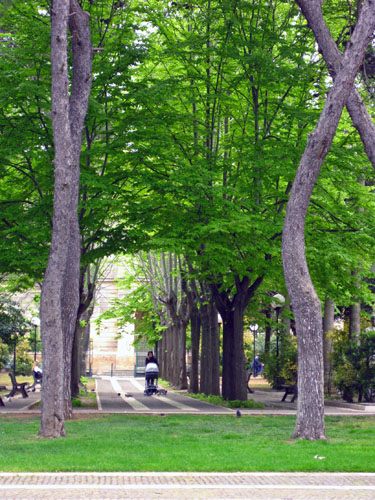 Accompanied by free flowing fiano wine, the group was really in need of a rest before meeting for dinner. But believe it or not, we actually wandered through town and had gelato, then â€œwalked it offâ€ with a pass through the park, before succumbing to the tradition of an afternoon siesta. 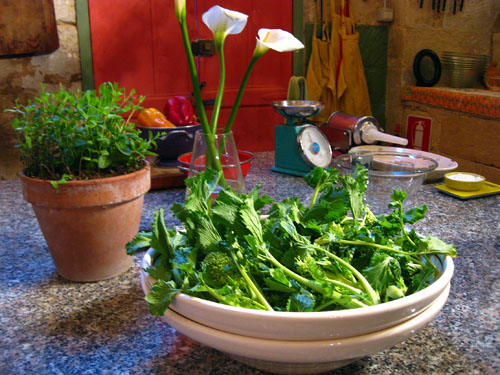 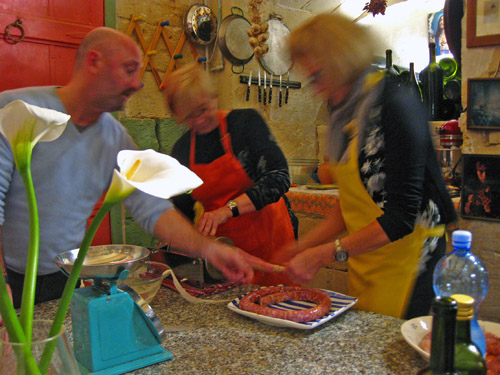 After picking up the wine for the evening, we reconvened to make two of my favorites from the weeklong menu – house made pork sausages. 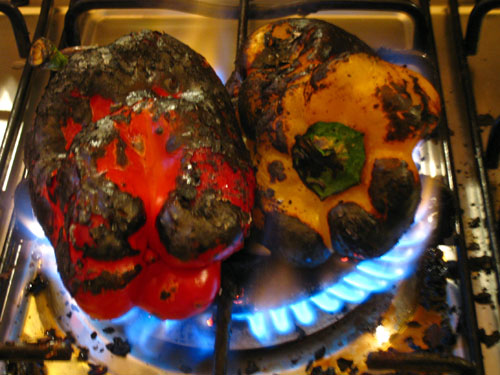 They are served with roasted peppers which are done over the open flames of the kitchen stoves – poor Anna who has to clean that tomorrow! – and orecchiette cime di rape, the pasta we had prepared earlier in the day with a creamy broccoli rabe sauce typical of Puglia. We had a guest for the evening, Alessandro, who is the chapter head for Slow Food in Lecce, a group numbering about 75. It was fun to be seated next to him and share stories about school garden projects and more. Perhaps most shocking is that at 31 he still lives at home with his mother and doesnâ€™t cook (or do anything else for himself by his own admission) – the young and single Italian men are completed spoiled by the mama! 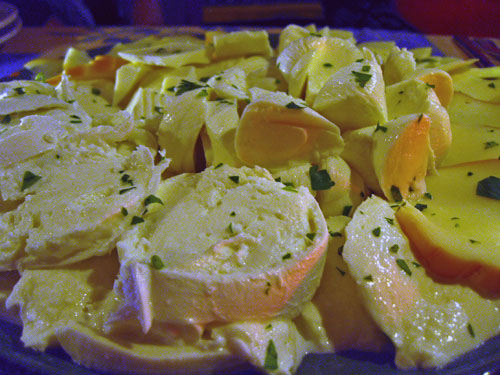 We began the meal with the antipasto platter of assorted cheeses… 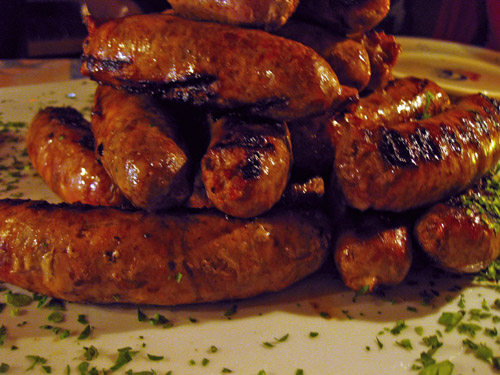 …then moved on to the pasta, sausage and peppers… 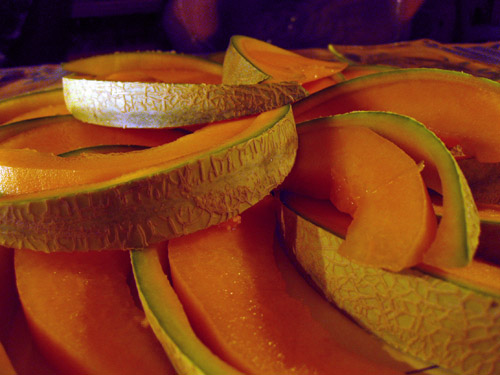 …and finally finishing with the melon we had purchased for lunch but never got around to. 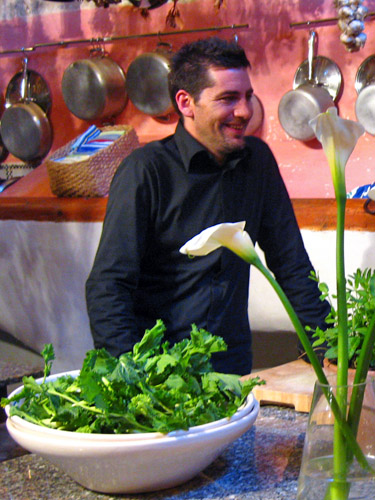 While I love the cooking lessons, the food, and of course the wine, what I most love about sitting down to meals at The Awaiting Table is the opportunity to chat with the staff and guests (like Giuseppe – isn’t he cute?). Tonight I received help on my Italian from Laura, Silvestro and Manuela, while I gave all of themÂ quite a laugh at my misunderstanding of a sign in town. Itâ€™s casual, itâ€™s friendly, and for me, itâ€™s quintessentially Italian.