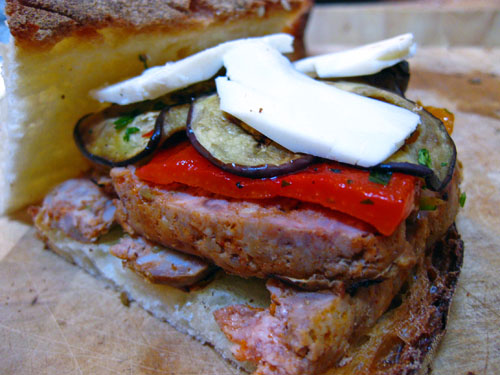 Our day began not in the usual fashion of a market trip, but my joining Silvestro in the kitchen to make sandwiches from the leftover sausages and vegetables from the night before. While this appeals to me immensely, he says this is the one dish he can no longer eat after 6 years of cooking classes and picnic lunches. 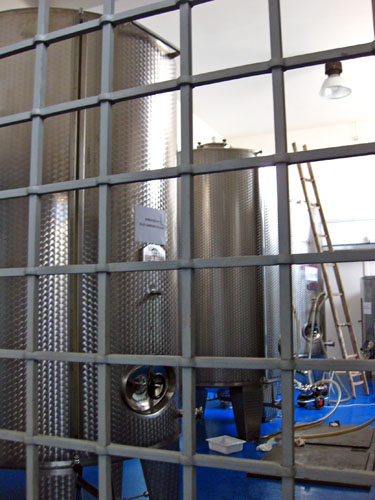 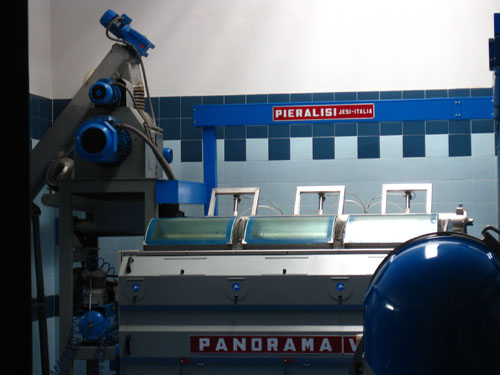 Silvestro changed the schedule this year to accommodate my desire to take the group to an olive grower and to visit the producers of authentic extra virgin olive oil from this region. While somewhat interesting, perhaps more interesting is to visit this region during an actual olive harvest, learning how they make oil not through a lecture in Italian translated to English, but rather by watching the process. 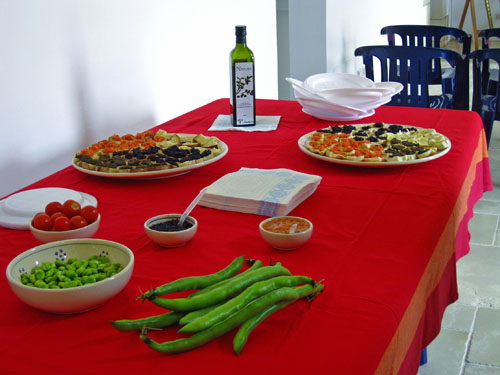 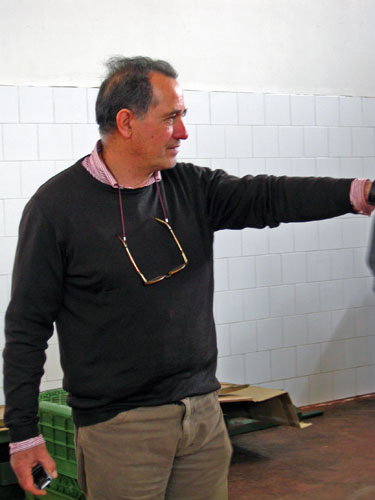 We â€œsufferedâ€ through (I say this tongue in cheek as we actually quite enjoyed both of the tours Â at Pantaleo and Conte), tasting the oil as well as the snacks they presented to the group, then made our way further to Otranto. Iâ€™m bringing home a bottle of each – Conte is the spicier ogliarola and Natura is the milder cellina olive. 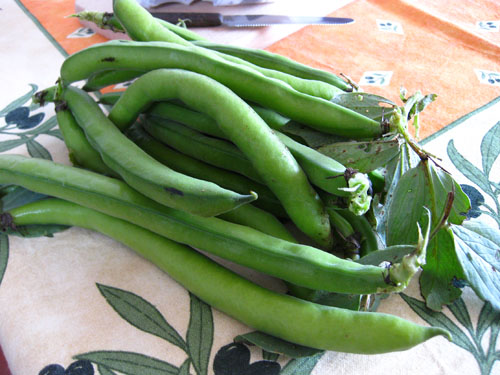 I’m not sure I quite get the idea of eating the raw fava beans in between olive oil tastings to cleanse the palate. To me, they taste more like a highly tannic raw food, and it only makes me want to wash my mouth out before proceeding.

But the olive grower at Conte made it clear he was sharing his freshly picked crop with us before settling into his lunch of fava beans and … who knows what else. 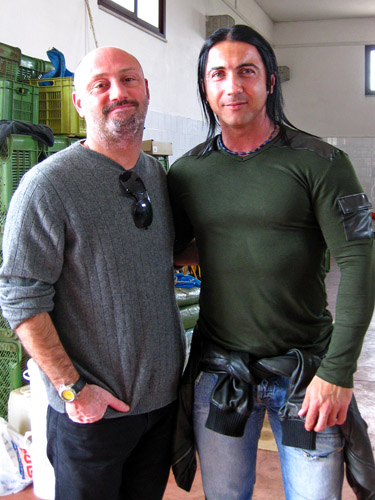 After our tastings we piled back in the cab with Antonio (thatâ€™s him, Mr. Muscles, with his buddy Silvestro) to drive to Otranto.

Normally we would head to the water to sit and enjoy a picnic lunch, but we were blessed with a downpour today so we took our lunch to a cafÃ© near the water and snuggled up together under the umbrellas to literally weather the storm. 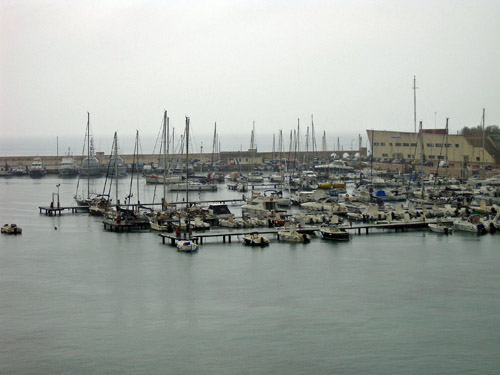 Itâ€™s really a shame as Otranto sits on the Adriatic Sea, just west of Greece, and in the sunlight the water glistens with a bright turquoise color. In the rain, itâ€™s just kind of cold.

One of the sometimes endearing and sometimes annoying things in Italy is that everything – churches included – are closed somewhere from noon until 5, but at a minimum for a couple of hours. What else to do but have gelato while we waited for the church to open at 3? 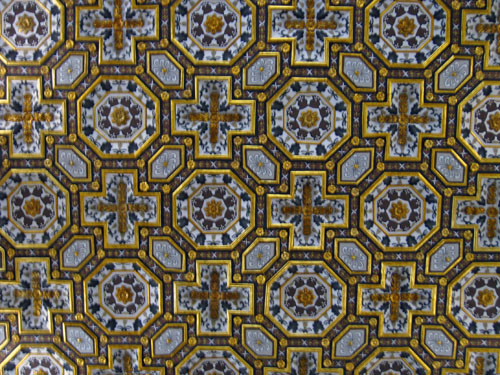 We pressed on in the rain, because Silvestro and I knew the group would want to see the mosaic floor in the church – the largest in all of Europe. The ceiling gets little attention because it’s so new (17th century) but it’s worth glancing upward to take it in. 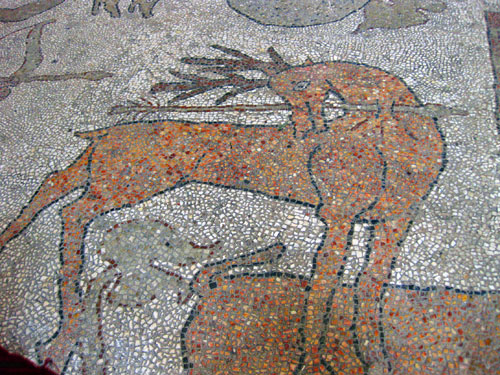 Back â€œin the dayâ€, when many couldnâ€™t read or write, the only way to convey information or educate people was through pictures, and this giant floor contained everything they wanted to teach – symbols for Christ (the stag with the arrow shot through him (the Dutch, I think I learned, were the first to actually paint a “portrait” of Christ as a human)… 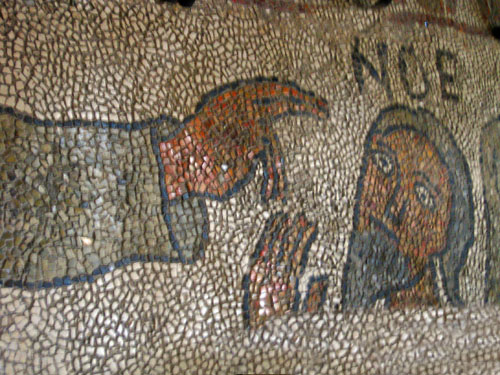 …the hand of God directing Noah… 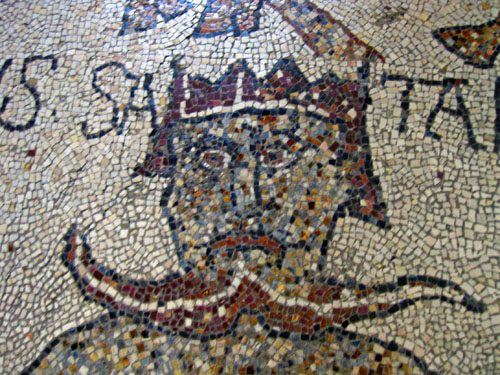 …and a depiction of Satan (see the two tongues?) representing hell. In between there are symbols and diagrams of virtually everything that they would have want to teach people at this time (11th century). 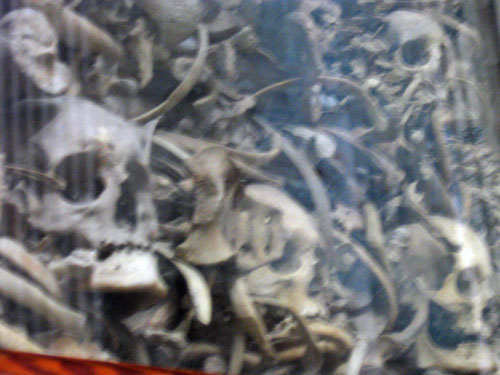 The church was used as a stable by the Turks when they came to conquer this area – killing as many as Christians in a single day when they refused to denounce Christianity, as witnessed by the many skulls and other bones on display in this chapel within the church. Is that not the definition of faith? 775 people have gone before you, been beheaded in front of you when affirming their faith, and yet you still step up and affirm yours. Whether you are Christian, Muslim, atheist or agnostic, this is quite a demonstration of belief. 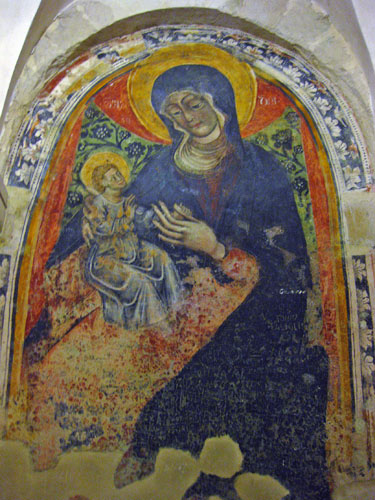 The church also has a lower level, including one of the rare black madonna frescoes, indicating the influences in this region from Africa.

For the remainder of the day, wee really just lazed around the town of Otranto, watching the rain, before returning to Lecce late in the day. After a short rest, we reconvened for a cocktail and pizza before going to bed at 10, the earliest evening of our trip yet, perhaps soggy and tired from a day of rain. True sign of how tired I was? No cocktail or dinner photos. Purtroppo! Mi dispiace!