We got up fairly early, feeling refreshed thanks to a real bed and some good coffee, grabbed a rental car at the hotel, and began driving to San Francisco. This part of the trip takes you through the Sierra Nevada mountains, and we knew if we had stayed on the train we would have completely missed these stunning views. 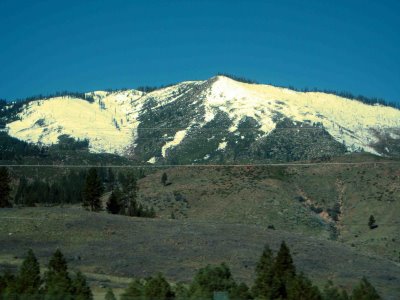 What a welcome sight it was to see the city looming in the distance – at this point we had been traveling for two and a half days just to get here, in our own version of Trains, Planes and Automobiles! 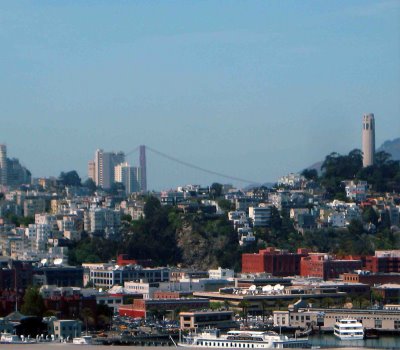 Before we even checked into the hotel, we headed down to Fisherman’s Wharf for some seafood. That’s Alcatraz looming in the distance – so close, yet so far if you were a prisoner there. 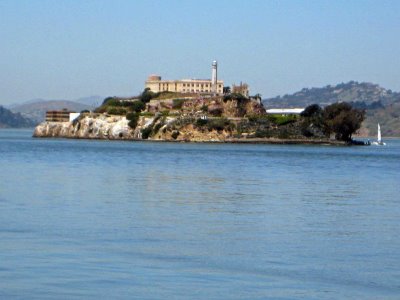 I ordered up some mussels in a white wine broth… 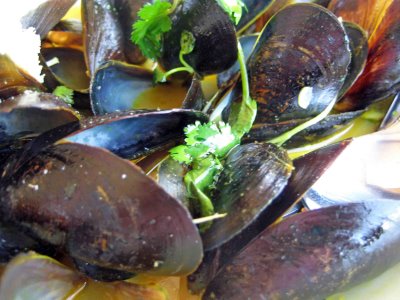 …along with a nice lunch sized salad of mixed greens, and felt ready to explore. 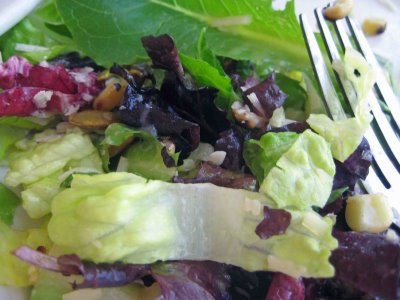 The heart of San Francisco is pretty compact, so it’s easy to wander around on foot to most places, or to hop on the trolley cars or grab a taxi. 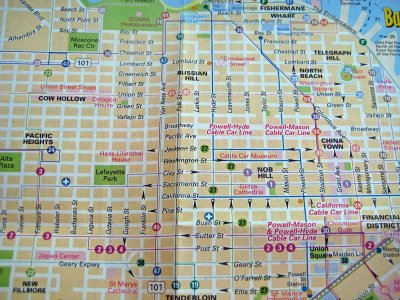 Before we left the wharf, we hung out for awhile to watch the sea lions sunbathing and playing. They are hilarious to watch wrestling! 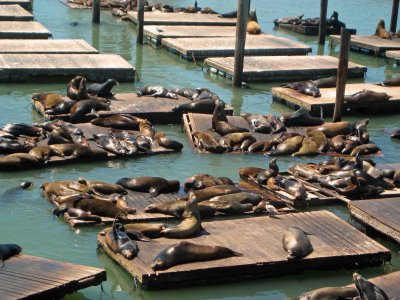 And of course, on our way back to the hotel before we ditched the car we just had to drive down the famous Lombard Street. I hadn’t been on this street since my mom’s uncle drove us down this when we were in CA when I was about 11 or 12. 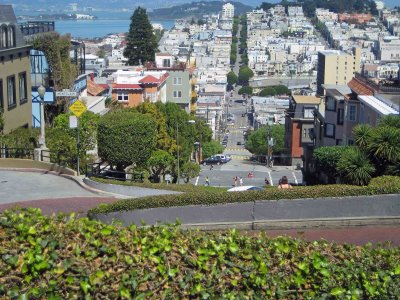 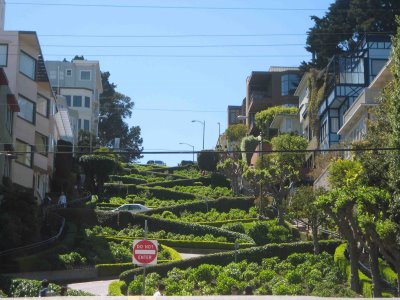 We checked into the Hotel Diva, which for some reason I neglected to take any photos of. It’s part of a group of hotels called Personality Hotels, and they have about 5 boutique places right around the Union Square area of San Francisco, and all are about $150 a night, which is a steal in this area. We got checked in, cleaned up, then headed out for our anniversary dinner at The Slanted Door, Charles Phan’s famous Vietnamese spot on the water. 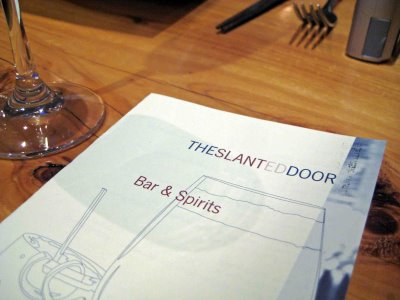 We were ready for something special and this place did not disappoint. Interestingly, many destination restaurants have an air about them – they are so in demand that diners are sometimes left feeling like they are lucky just to have gotten in. The Slanted Door was different – bustling with people and noise, very friendly – and our waiter explained that to him, many exclusive restaurants aren’t for everyone, but that The Slanted Door is diametrically opposed to this and IS a restaurant for everyone. We began with the Japanese yellowtail with crispy shallots and Thai basil… 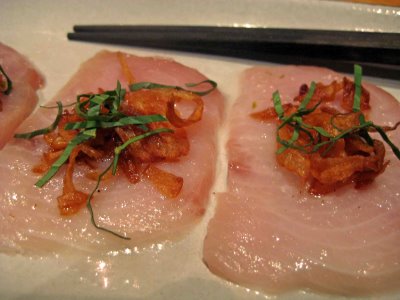 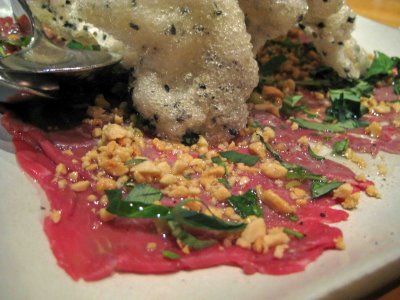 The Slanted Door Spring rolls, with shrimp, pork, mint and peanut sauce, were light and refreshing. 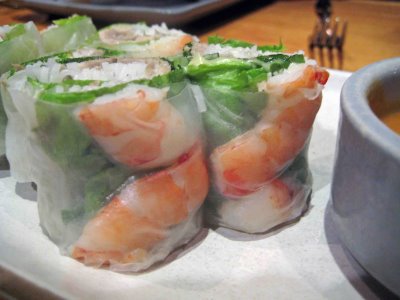 Have you ever had green papaya? We couldn’t fit in another appetizer, but my friend wanted to try it – alone, it’s quite bland and boring, but in a salad with the proper dressing and seasonings it shines. 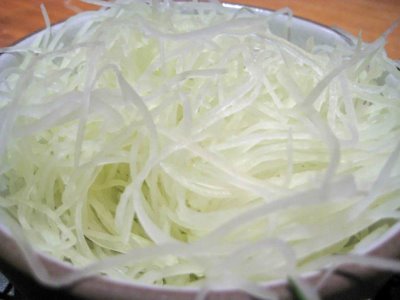 These are Chue Farm sugar snap peas with maitake mushrooms – notice the growing trend to name the source of the food? And you can bet these are local farmers the restaurant is highlighting. Warms my locavore heart! 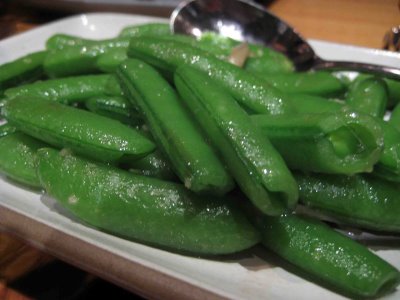 I’ve never had a dish quite like this one – Niman ranch shaking beef cubed filet mignon with watercress, red onions, and a lime dipping sauce that really made the dish. 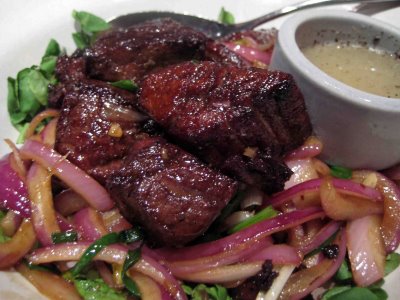 We followed that with the Australian free-range lamb rack with crispy sunchokes and tamarind sauce, our final dish of the night. 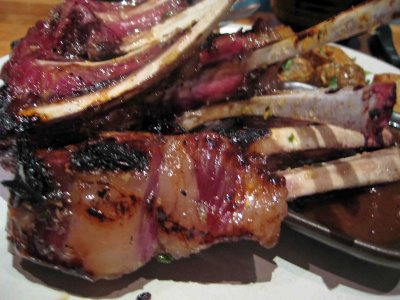 We would have loved to sample something from the interesting dessert menu, but we were stuffed at this point and tired from our travels… 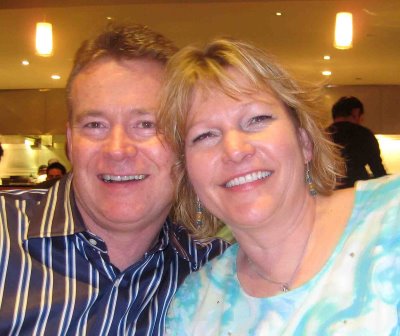 …so after one last photo of the water, we hit the hay! 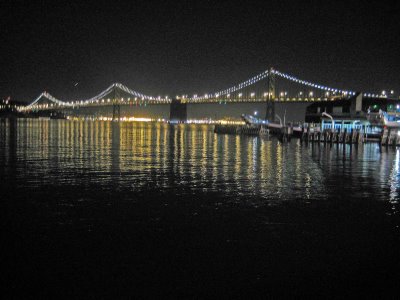