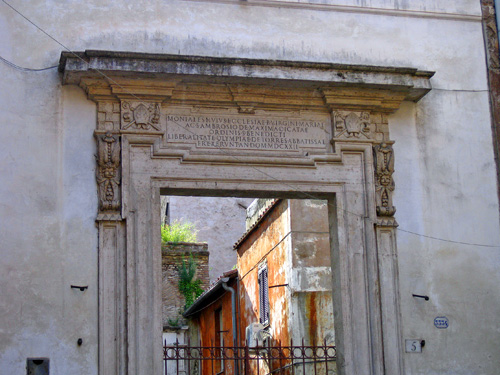 Weather makes all the difference in touring a city and you have no idea how pleased I was to wake to sun (after a forecast of rain) on the day with our most ambitious touring planned. I met our guide Inger Rasmussen in 2008 – she’s an American from Detroit who has been in Italy for about 10 years, and she’s a wonderful guide. We set out for the Jewish Ghetto, since the cuisine is so integral to the roots of culinary history in Rome. 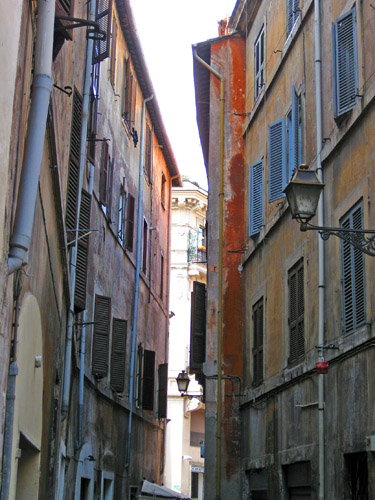 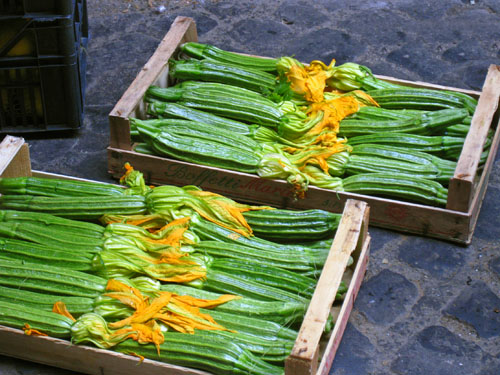 …past the young man dropping off crates of zucchini, blossoms intact, at a small trattoria… 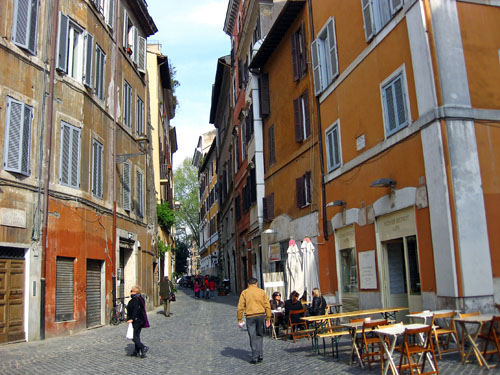 …and into the heart of the old Jewish Ghetto. While this neighborhood looks lovely today, it’s hard to imagine that over 5000 Jews were rounded up in the 1500s and forced to live in this one block area. If they accepted Christianity, they could leave – few did. 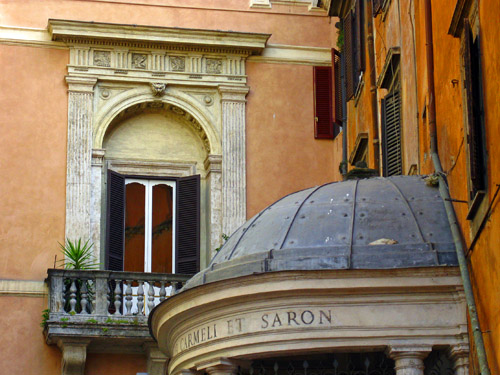 With it’s proximity to the river, the area suffered from constant flooding, leaving the residents to live in the rotting smell. 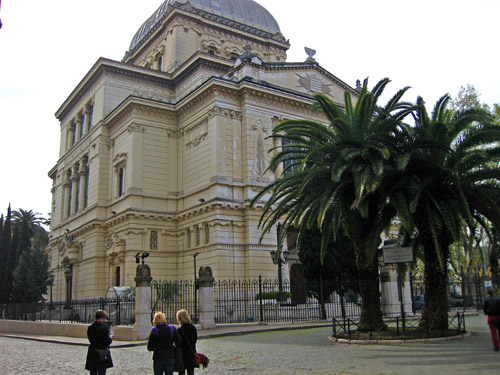 After the Jews gained their independence, they built a gorgeous synagogue near this square, and it still stands today. Sadly, almost all of the freedoms the Jews gained were lost again when Mussolini sided with Hitler during the war. Although the Jews were promised they would be spared the concentration camps if they raised gold for him, they were sent anyway. Being in a city as old as Rome let’s a visitor see layersÂ  of history built upon each other, and unfortunately, sometimes civilizations repeat past mistakes. 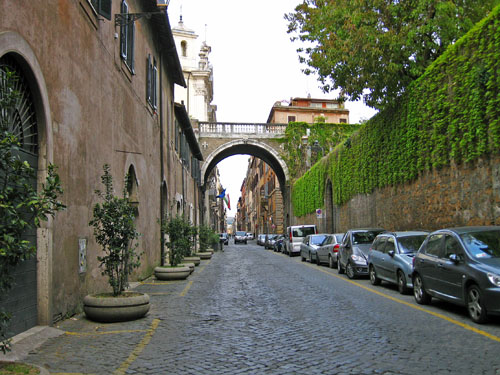 Leaving the ghetto, we crossed back over Via Giulia on our way home. Built as one of the first wide boulevards in Rome, and straight, which was a new design, the bridge across it is a reminder of the powerful Farnese family whose palazzo backs to the street and is now the home of the French Embassy in Rome. 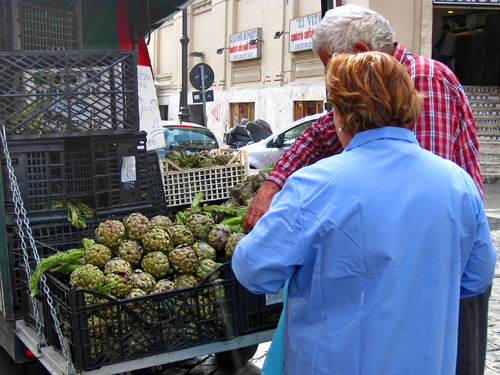 Back into the Campo dei Fiori, the famous daily market in Rome, we spotted the quintessential Roman specialty, artichokes. The Jewish tradition is to fry them, the Roman tradition is to simmer them, but either way they are delicious. 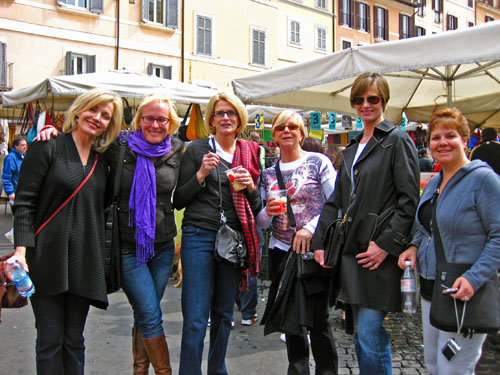 We said arrivederci to Inger (she’s the one in the boots) at the market, browsed a bit, then found our way to a charming spot just behind the Campo on the Piazza Farnese for lunch. 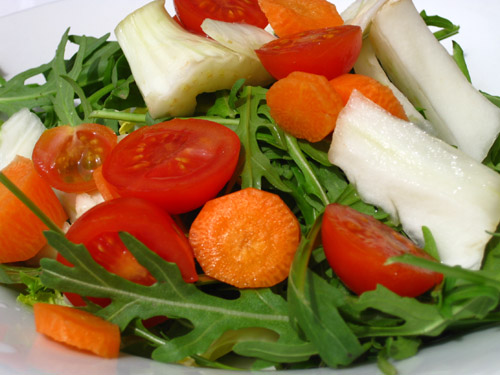 While nearly every place has the ubiquitous insalata mista, it’s always a surprise as to exactly what vegetables will be included. Fortunately most have at least some of the peppery arugula, and this one also featured slices of fresh fennel. 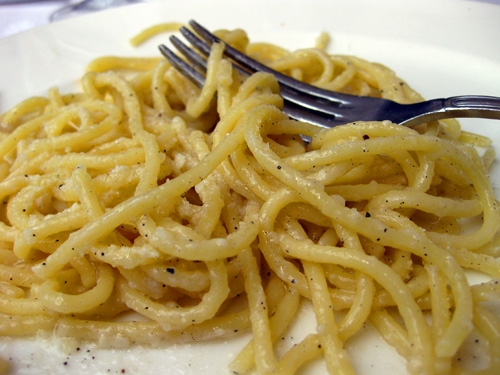 There are a handful of pasta dishes that Rome and the Lazio region are known for – spaghetti all’arrabiatta, spaghetti carbonara, gnocchi alla Romana, and what I dove into for lunch, spaghetti cacio e pepe.This is classic – just a few simple ingredients. In this case pasta, olive oil, Parmigiano cheese and pepper) are combined to created a creamy and flavorful pasta dish that is so good you can’t put your fork down. Or at least I couldn’t and didn’t until the plate was clean! 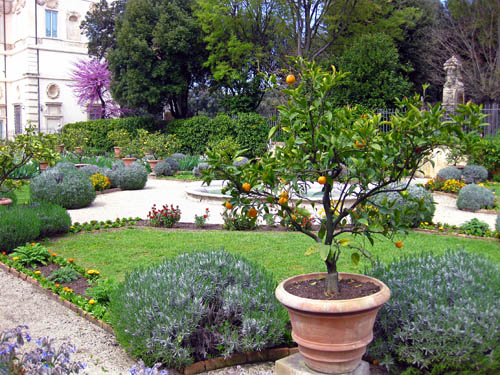 Post lunch our group split, with those new to Rome heading to ancient Rome for a tour of the Coliseum, the Forum and the Palatine Hill. Not wishing to do that for the 5th time, another woman and I made our way to the Villa Borghese for a guided tour of the art housed there. You can’t take photos inside, but trust me it’s worth the trip. If you’ve already seen the major sights of Rome, spend two hours here (a reservation and a guide are a must) and you’ll see theÂ treasures of Caravaggio, Bernini and Rafael in all of their glory. 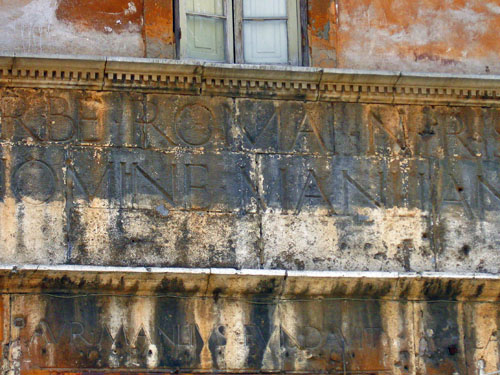 We reunited in time to make our way south to Da Sergio, a classic old and small trattoria just off the Campo dei Fiori, for a rustic Italian dinner. Trattorias are busy for a reason – abundant, mouthwatering food comes cheap. So we jammed into a tiny table in the back and started ordering. 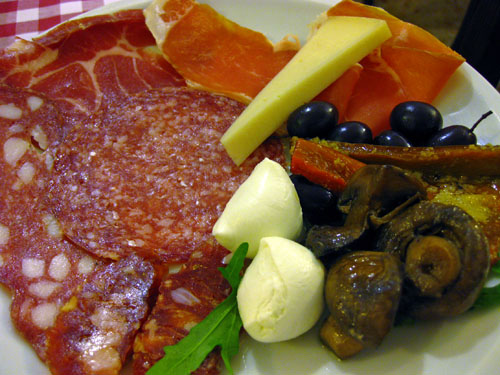 We had yet to share an antipasti platter, so opted for that – a selection of meats, mozzarella, and vegetables was a great warm up for the food to follow. Note: those white pieces in any of the cured meats in Italy are the fat. It’s inserted for one reason only – flavor, big flavor. So splurge a little when in Rome and eat all of the fat with the meat. Italians think Americans are nuts for removing the fat attached to a piece of prosciutto! 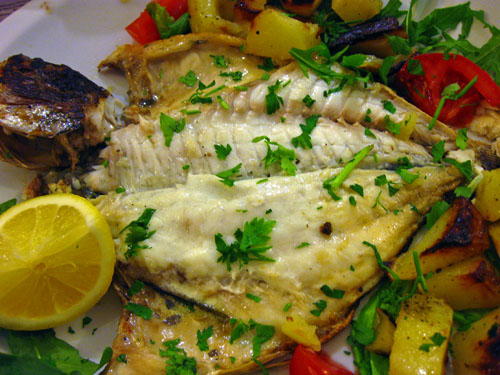 Having eaten way more pasta than a short girl should, I opted for fish for dinner for a change of pace. The orato, which I think might be dorado, was baked, tender, juicy, and accompanied by the world’s creamiest roast potatoes that I tried not to eat too many of. 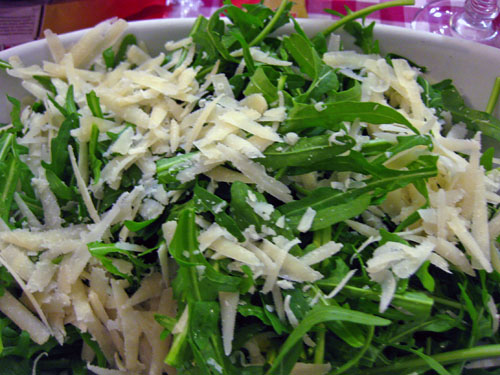 It’s hard to know how large dishes will be when ordering, so I was shocked, but not really disappointed, when a family sized bowl of arugula topped with shredded grana padano cheese arrived after my fish. A drizzle of olive oil, a sprinkle of white balsamic, and a little salt and pepper and I was ready to dig in and continue until I hit bottom. Now that’s what trattoria food is all about! Buona notte – a domani!