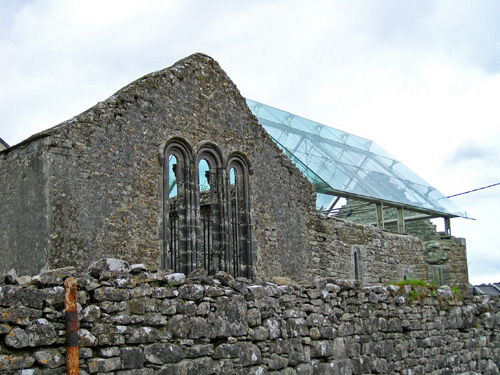 My parents had their heart set on spending today driving up north to Cong to visit the museum from The Quiet Man movie, the source of much of their romantic notion of Ireland. But after determining that would be a 6 hour round trip drive, we instead took Declan and Cecelia’s advice to visit the historic Burren area of County Clare, starting with the Burren Centre in Kilfenora, adjacent to the Kilfenora Cathedral, built around 1189. The center has a small museum that explains the geological significance of this area (I’ll explain as I go here) as well as the early settlers and their ruins that still dot the landscape. 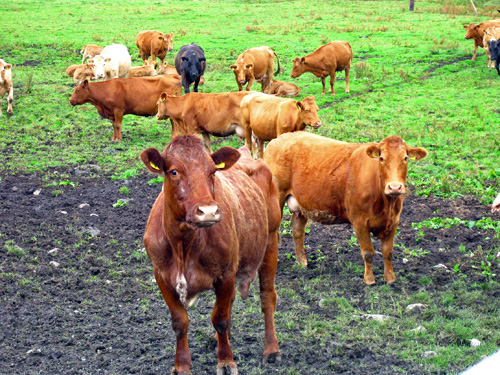 Along the small road through the Burren, we came across many fields of cows (not many sheep here), including this unruly bunch who really gave it to us when we tried to photograph them. 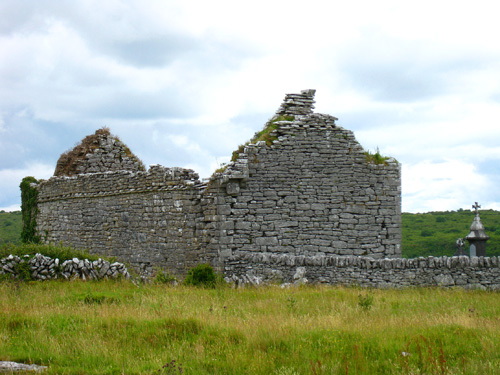 Leaving the center we made our way up the small country road, passing by the main sights of ruins which include Carron Church… 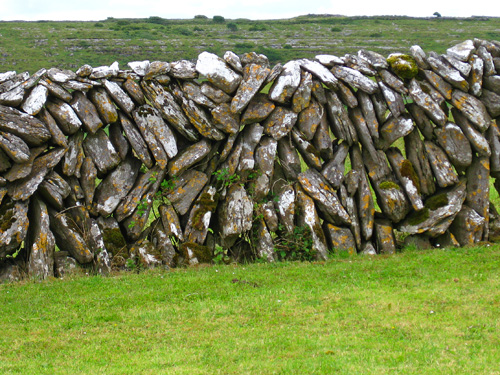 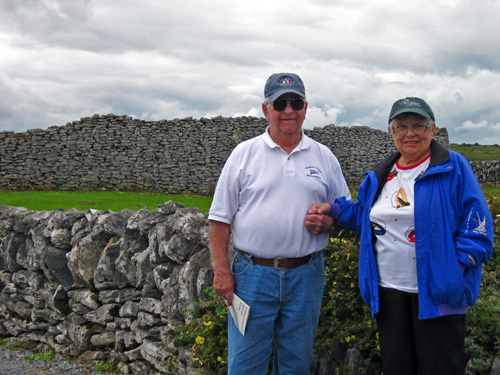 …and finally getting out at the Caherconnel Stone Fort. 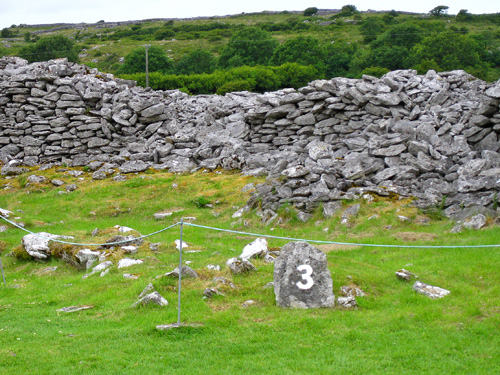 These ruins are bit like looking at the Forum in Rome today – just a pile of stones as my husband would say! But at one time there was a ringfort, used for a farmstead, nearly every 1/2 km in the area – this one being nearly twice the size of most and probably housing more than one family. 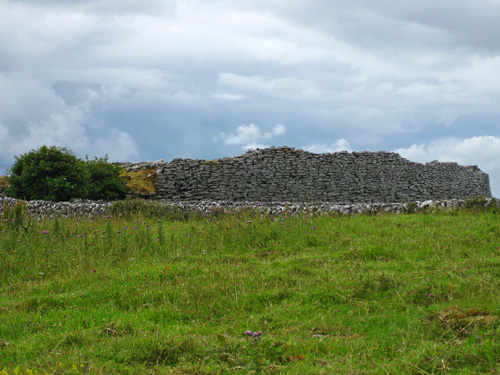 Simple yet successful, design – making the use of the most plentiful thing around these parts: rocks. 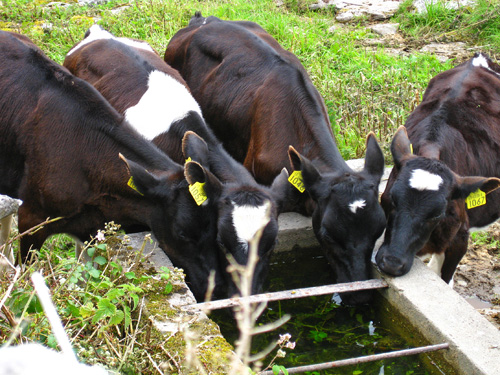 Around the ringfort is private farm land, and these “teenage” calves must have heard the water turn on as they all came running for a drink as we walked down the path. 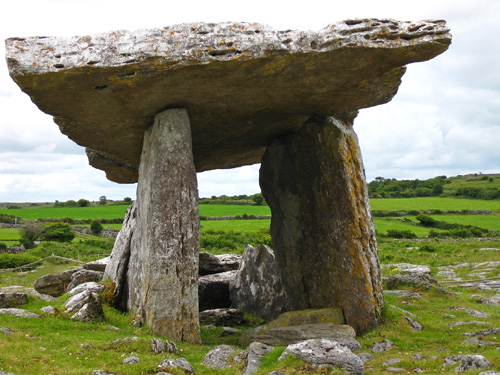 Past the ringfort and a bit further up the R480 (remember that means a Really narrow road!) you hit the Poulnabrone Dolmen, one of the portal tombs dating back to the Neolithic period, somewhere between 4000 and 3000 BC. It has a Stonehenge-like appearance to it, but was most likely used for a different purpose, to bury special dead people from this era. There’s lots of information about the tombs online so I won’t drag it out here. 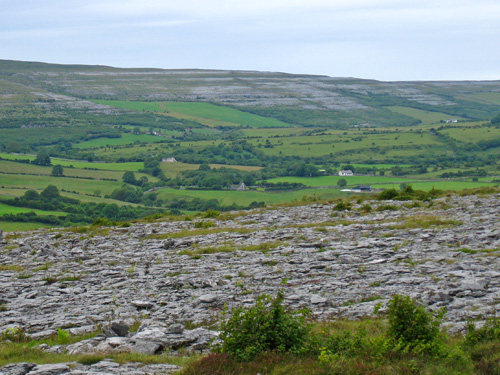 The other thing you can see close up from this part of the Burren is the formation of the rock. At the center we learned that originally (350 million years ago) this area was all under a warm sea. The deposits from plants and animals eventually turned into the limestone rock, which in turn was carved out during the Ice Age a mere 2 million years ago. All along the rocky fields and the coast you can see fossils of the marine life that was at one time swimming over the rocks, and you see a stark contrast between the rocky land where soil has eroded and the fields on the other side still covered in dirt and substantial vegetation. 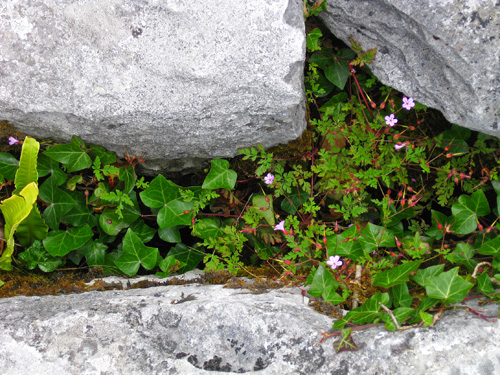 The erosion over the many years has created these little crevices all across the rocks that somehow miraculously grow alpine, arctic, and Mediterranean plants in the same area – including some that grow nowhere else in Ireland. While it appears desolate and devoid of vegetation from afar, it’s actually filled with tiny plants and wildflowers up close. 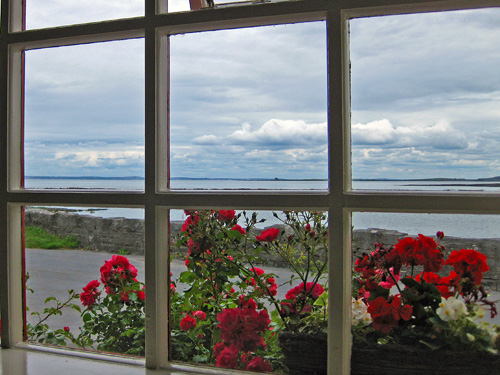 We continued on past Newton Castle (couldn’t snap a pic while driving!) to the seaside village of Ballyvaughan where we popped into Monk’s for lunch, since they claim they have the best seafood in the county. My dad would agree since he has 7 days worth of seafood chowder for lunch to compare to it! Not only do they have great seafood, but our table had this killer view through the flower-adorned front window out to Galway Bay. 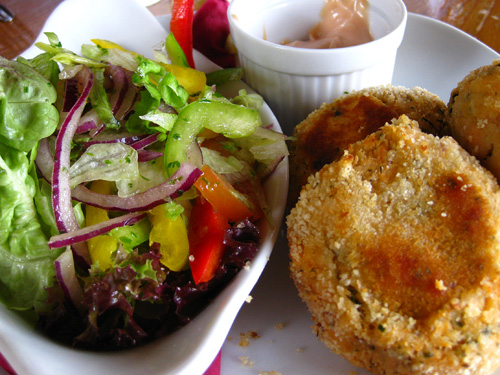 I find the creamy chowders just too heavy so chose the fish cakes (because the menu says they are famous) which came paired with a nice salad. Tonight we’ll dine at the Ballinalacken Castle Hotel again because there isn’t much else near here on this remote point, and because the food is downright gourmet. Tomorrow, it’s off to Dublin!