The Three Gorges Dam on the Yangtze River 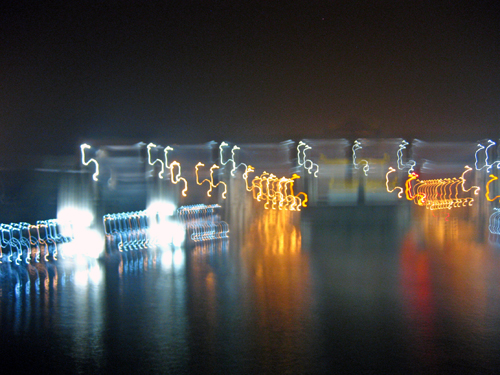 We made ourselves stay up late after cruising the gorges of the Yangtze River to see our ship go through the locks at the Three Gorges Dam, the largest hydroelectric power station in the world. Without a tripod, this is my husband’s psychedelic photo of the lit up dam as we approached, the result of trying to photograph at night without a tripod. 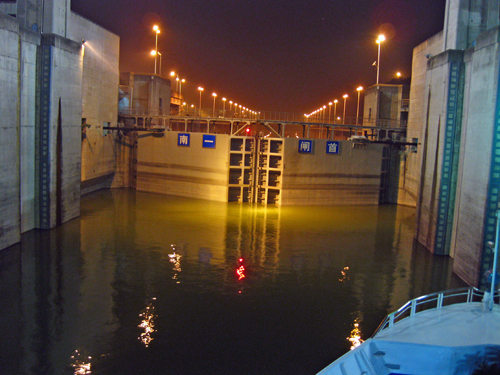 The ship waited for what I think was about an hour before we finally were cleared to enter the first lock, along with another cruise ship and two freighters. As I watched the lock open, I had a creepy vision of a massive wall of water rushing towards us, but in fact we were going downriver and the wait was in order to fill this lock to the level we were coming from. 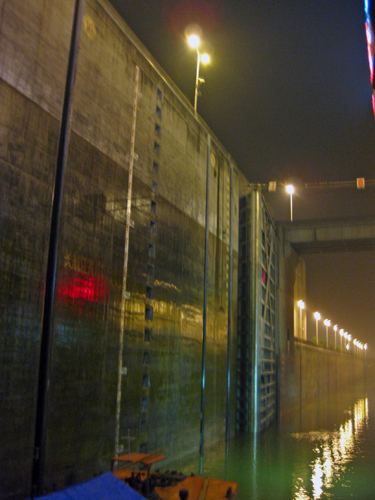 As all the ships were getting tied up and they shut the lock behind us, we headed to our cabin to go to bed, but then noticed how quickly the water was let out of the lock and how quickly we were lowering to the water level of the next lock. It’s a bit claustrophobic, and all I could think of was how I would get out of this cement chamber in a crisis. It seemed going to sleep – with earplugs so as not to hear the next 5 hours of transfer through the 5-stage lock system – seemed the best solution. 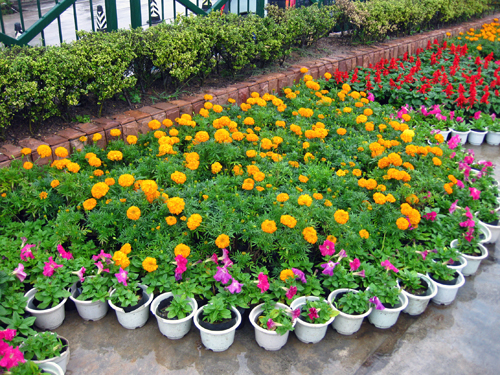 We woke to a miserably raining day – our first of the trip – and set off, unenthusiastically I must say, on the buses for our tour of the massive Three Gorges Dam project, which will complete in 2011. The amount of landscaping on the way – trees all along the ridges surrounding the dam, flowers everywhere – is impressive. I kept wondering who plants the thousands of trees I see everywhere in China that were clearly not native, and then I recall – 1.5 billion people live here. One thing they do everywhere is create large flower displays with all of the flowers still in the pots. They are laid out on terraces and plazas and I guess add beauty during the season and then can be easily tossed when the weather turns. 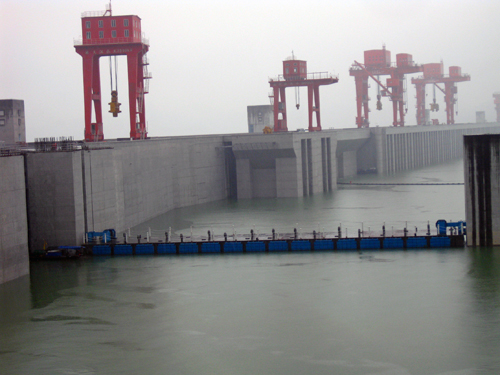 Even through the pouring rain (a real problem for my husband who learned that the umbrella we bought on the street in Rome last year isn’t really waterproof) you can see how large this engineering masterpiece is. Their plans to redirect water from the wet south of China to the dry north are nothing short of awe-inspiring. And although one of the primary reasons for the project is to produce power, an equally important goal is to relocate Chinese towns from the lowlands to higher ground and control the water flow and associated flooding. This year the dam proved it’s merit – no lives were lost during the flood season for the first time ever. 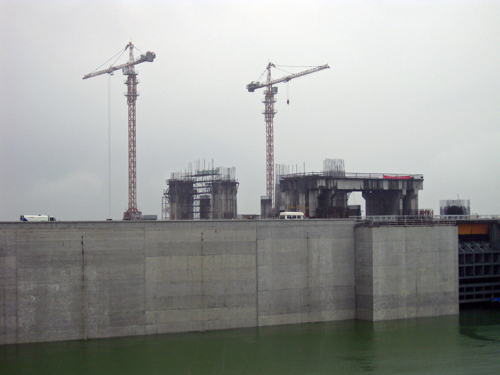 One piece of the project still under construction is the new ship elevator that will allow smaller vessels to enter the elevator and then the whole enclosed thing – water, boat, and all – will be raised or lowered in under and hour, saving them the 5 hour ordeal of going through the locks. 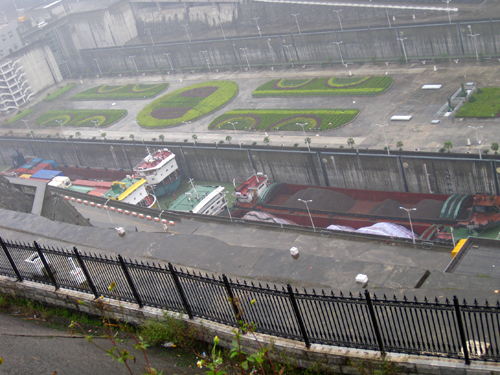 Standing above the locks and looking down at the ships making their way through gave us much better perspective of what our ship had passed through the previous night. Notice again the landscaping on the top level – I was quite surprised to see greenery in this industrial setting, but not as surprised as I was to see what was on sale inside the gift shop. 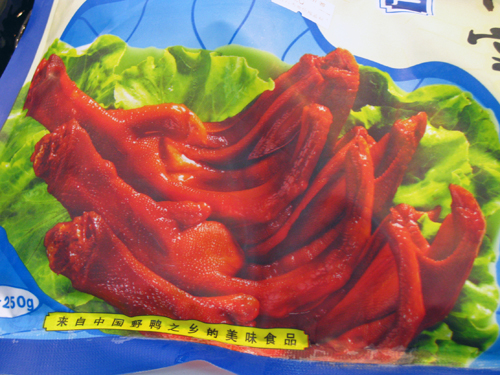 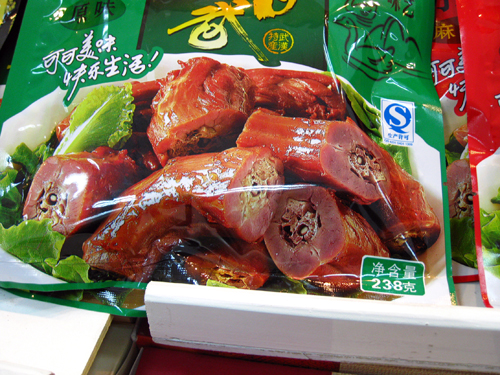 Chicken feet and duck necks sold in colorfully decorated bags (which by the way prevent you from seeing at all what’s inside and what it really looks like) were placed alongside other Chinese favorites like dried mushrooms and shrimp and cartons of cigarettes. What kind of preservatives have to go into duck necks to let them be sold like this?! 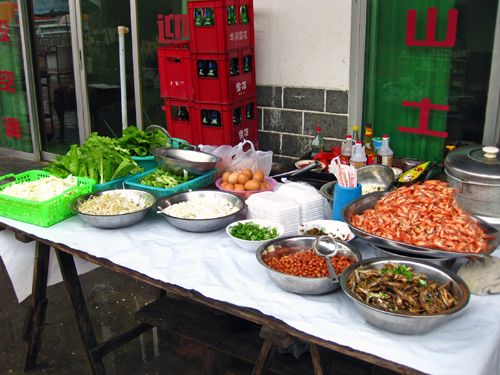 I had no desire to try those bagged items, but would have loved the chance to get off the bus on the way back to eat from one of these ubiquitous noodle bowl stands that you see all over China. Big pots of simmering broth and a wide selection of greens, other vegetables and condiments. 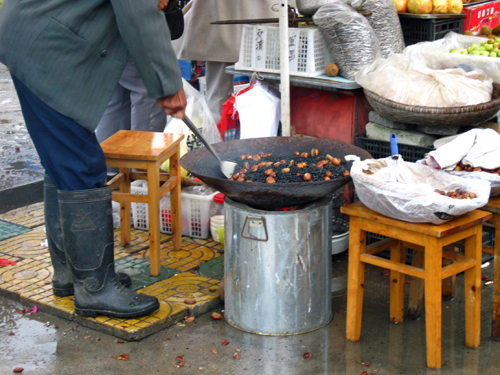 The other thing you see everywhere, at least at this time of year, are vendors roasting chestnuts…in woks filled with nothing other than coal over a fire. Somehow that doesn’t seen healthy to me! 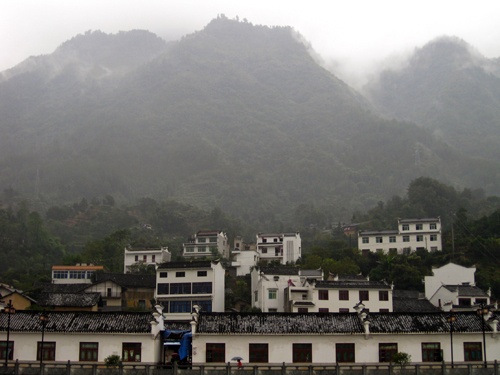 We left the small town where we had docked to visit the dam and continued making our way down the river, happy to be nestled in the lounge of the ship for the afternoon instead of trekking around in the pouring rain.