An Elementary School near Jingzhou 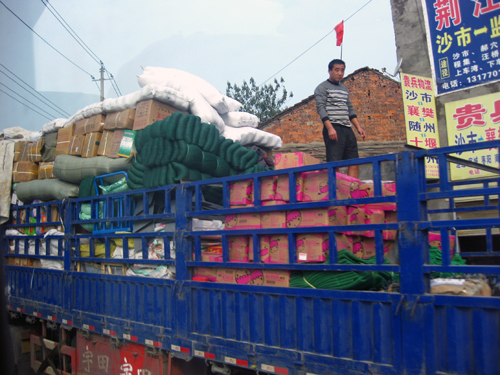 We left our ship this morning to make our way from the port at Jingzhou to an elementary school that was renovated and is supported by Viking River Cruises. On the way we passed all modes of trucks carrying just about everything you could imagine... 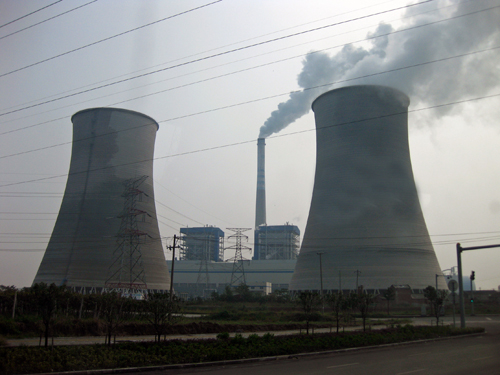 …past another huge coal plant spewing pollution into the air… 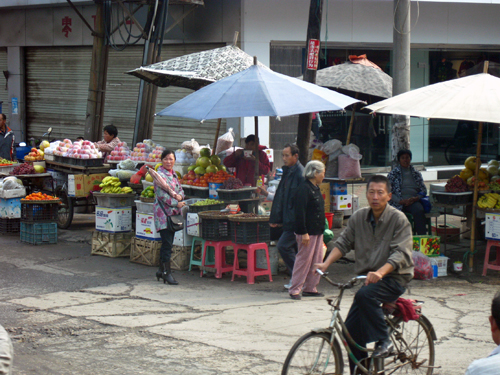 …past corner after corner filled with markets and food stalls… 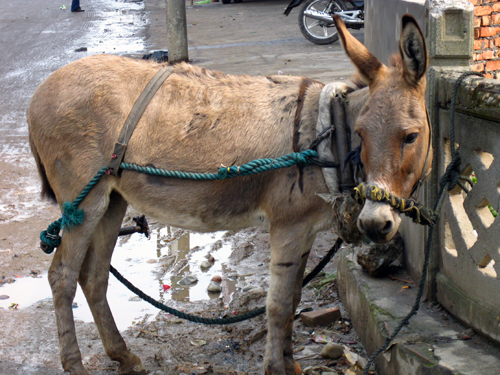 …and finally past this donkey tied up out front of the school. We must have heard 100 times on this trip that 9 years of education is now “compulsory” for kids, but it’s just not clear how that is accomplished. It seems that some have school costs paid for them, but others must come up with money to pay for the schooling. And how it can be mandated without financial support is just another paradox about China that I don’t seem to quite understand. So it’s fortunate for this school (and two others) that Viking has decided to invest in the kids’ futures. 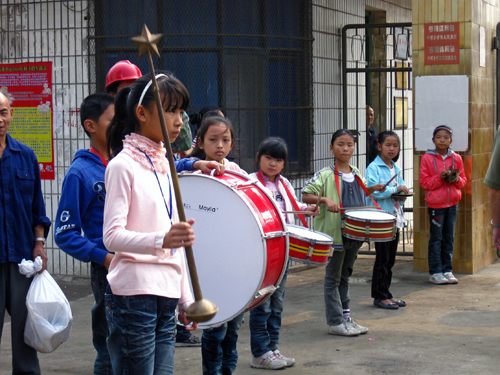 We were greeted out front by this charming band – who played just about at the same level as an elementary school band in the US, which is to say not great, but cute to watch! 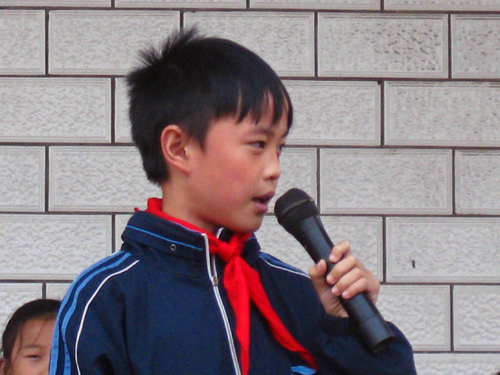 We were led into the school courtyard in front of an outdoor stage where this charming 5th grader (I think) worked very hard to emcee the entire program in English. It wasn’t obvious to me whether he had just memorized the words to say or whether he understood all the English he was speaking, but we were told that English is taught starting very young now. 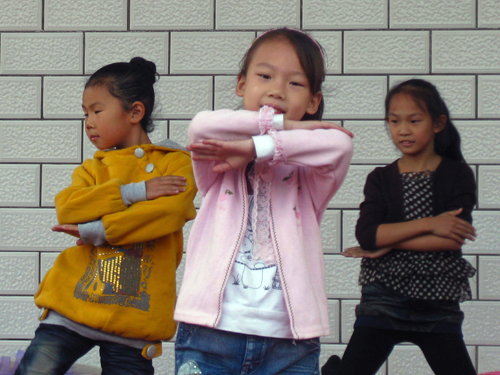 We watched several acts of both young boys and girls, dancing their half Chinese folk dance, half hip-hop moves, cracking themselves up along the way and leaving all of us smiling. 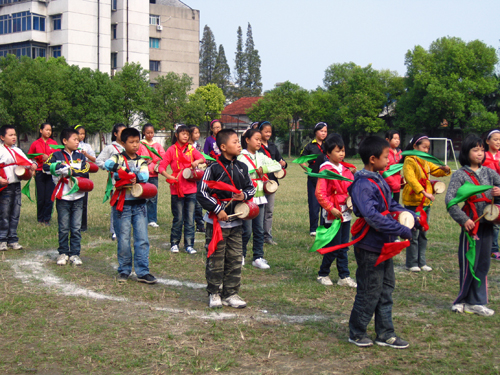 Another group out on the lawn did a very passionate drum number that the kids had obviously worked really hard on. 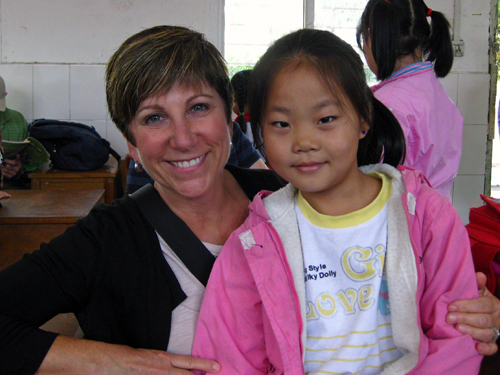 As our tour groups split up to go into classrooms, the kids came screaming and running out of the front door to grab our hands and lead us into their class, promptly motioning for us to sit at their desks, as they stood next to us grinning. (On a side note, there are times it’s helpful to be petite, and fitting into a 3rd grader’s desk in China is one of those times!) 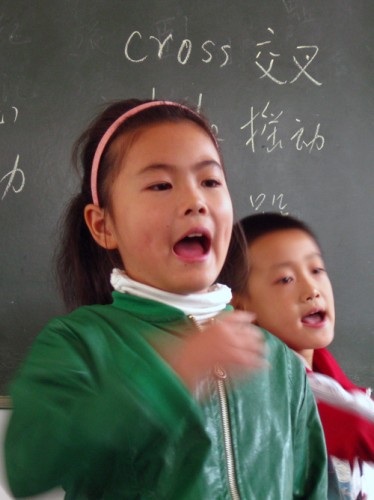 They continued with a couple more songs and dances in the classroom for us, then we all shared in a game that required whoever caught the flower that was being thrown around the room to stand up and perform, which a few of our group did really well. 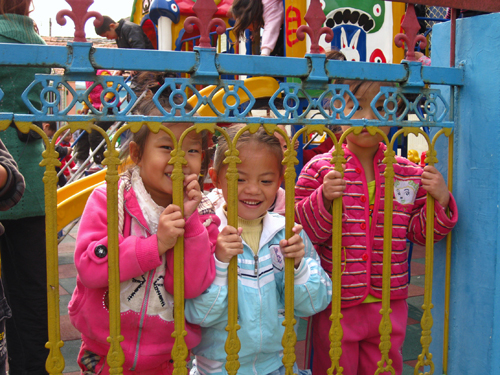 We left the school feeling richer for the experience, and I’m quite certain that most of us donated to the school as we left, hoping these kids would have a better life than their parents and grandparents. 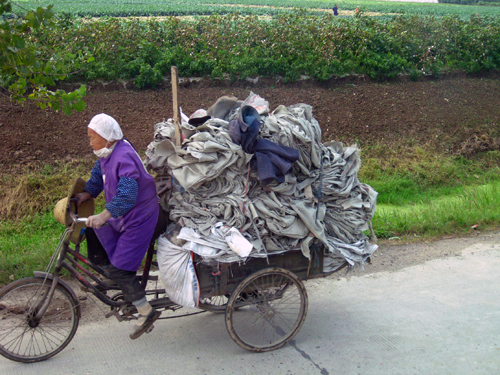 This was really the first day we had spent in the countryside on our trip, and the poverty is overwhelming. While the cities are growing and becoming increasingly more cosmopolitan and affluent, 720,000 Chinese still live in utter poverty in a farming existence. 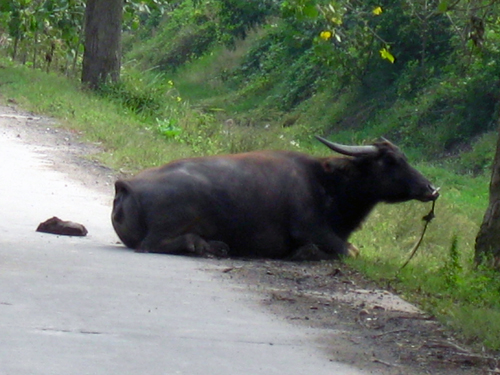 They use animals like water buffalo and donkeys to manually work the fields in the absence of any farming machinery. 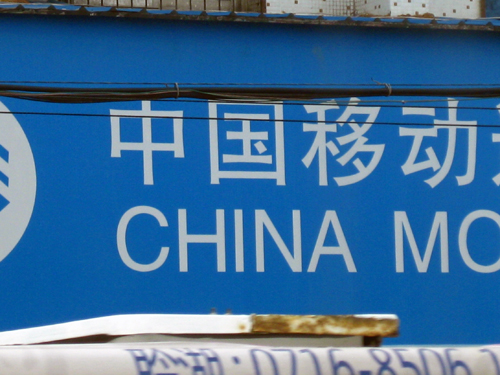 I had to wonder as we made our way back to the ship why there are so many signs everywhere for China Mobile telephone service when it seems like a clean place to sleep, safe water, power, food, and transportation might rank much higher on the needs list for these humble people who live in the western countryside of China.