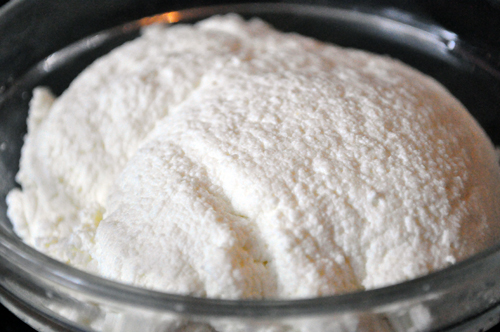 The first thing many people ask about food blog posts like this is why? Why should I actually make this from scratch when it’s so readily available in every grocery store? And perhaps you’re wondering why I wanted to make this. Well, the truth is that I’ve seen so many blog posts about making cheese – goat cheese (which I tried and failed at because I couldn’t find raw goat milk), mozzarella (which is still on my list to try to make), and ricotta – that I’ve just felt this was something I needed to try. Many bloggers tout how wonderfully fresh tasting this homemade ricotta is – truth is, I found it different, not necessarily better or worse, just different. It has a drier curd, for sure, and a really fresh taste, which was great. Best of all, I just felt like I learned how to do something new and was surprised how incredibly easy it is to make. For me, the biggest motivation to make it from scratch might be that when I need ricotta I usually have to run to the store. But with milk and lemon on hand, something most people have, it can be made in a jiffy without leaving the comfort of your kitchen! 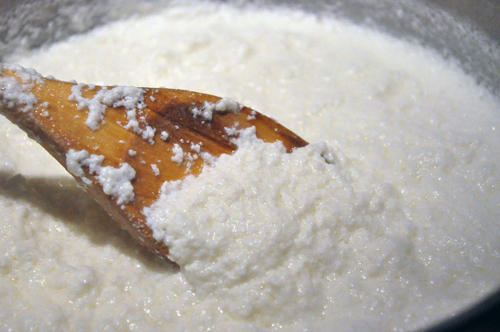 Bring the milk and cream to a boil with the salt, watching it very carefully as it will boil over in a second if you don’t watch it. Then stir in the lemon over low heat for a couple of minutes until the curds appear. Most recipes I found said to stir for several minutes, but I felt like the curds appeard almost instantaneously, and extra stirring didn’t really produce more curds. 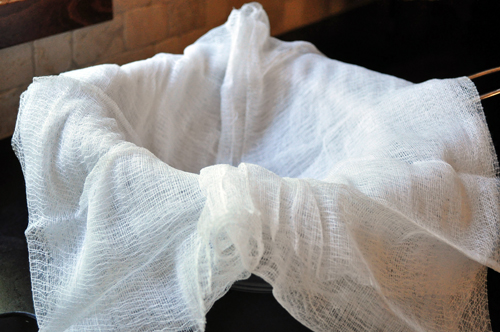 Place a strainer lined with a several layers of cheesecloth over a bowl and pour the curds and whey into the strainer, so the whey drains out into the bowl. And make sure your bowl is safe for high temperature. I used a melamine bowl which cracked almost instantly, leaking hot whey all over the counter, down the cabinets, and onto the floor. Again, many recipes I referred to said to let the curds drain for an hour – I found after a couple of minutes they were basically drained and I worried the curd was already pretty dry, so I chose not to drain it longer. The ricotta is good, but it’s really good when it’s used to make a creamy flavored ricotta spread for crostini – check back on Friday for that recipe along with the March olive oil giveaway from Gourmet Cooking & Living!

Combine milk, cream and salt in a large pot and bring just barely to a boil. Remove from the heat to stir in the lemon juice, then return pot to low heat and cook, stirring until curds form, about 2-4 minutes. Pour through a cheesecloth lined strainer, separating the curds in the strainer from the whey collecting below in a bowl. Let drain for a couple of minutes then turn ricotta out into a container, cover, and refrigerate. Best when used fresh.