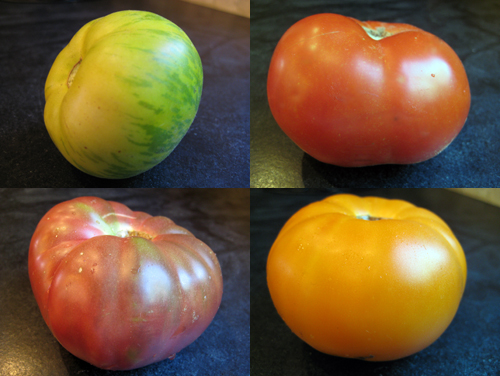 I’ve been scoping out the markets waiting for vine ripened tomatoes to finally hit so I can buy them in bulk to freeze. It’s a bit tricky – you see these pretty tomatoes hanging out on the tables at the market, but just ask, and most farmer’s in Colorado will tell you they are still hot house tomatoes. That heavy monsoon rain in July really hurt the tomato crop, and we just have to be patient. But on Sunday, Ela Family Farms had some vine ripened heirloom tomatoes. They were pricey, but they offered me almost a full flat of number twos – ugly, some bruised, a few rotten, but perfect for making sauce – for half price. I took them without thinking. 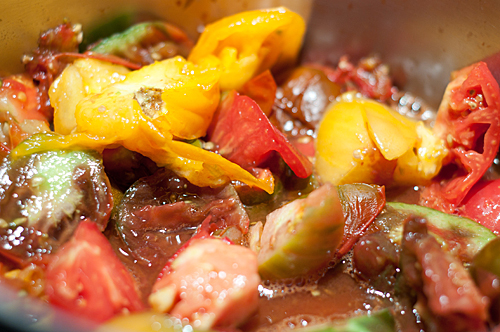 Making sauce is simple – if you freeze it like I do. Simply cut off all the ugly parts, any bruises, and especially any worms (a two inch caterpillar was living in one of my tomatoes!), then cut into large chunks and throw into a pot. Let them bubble away just long enough to soften, about 10 minutes, then put them through an old fashioned food mill to remove the seeds and skin. At this point, what you’ll be left with something that’s more akin to tomato juice – delicious, but quite thin. If you want to store the juice, or drink it right away, go ahead. But I was looking for a more concentrated, thick tomato sauce… 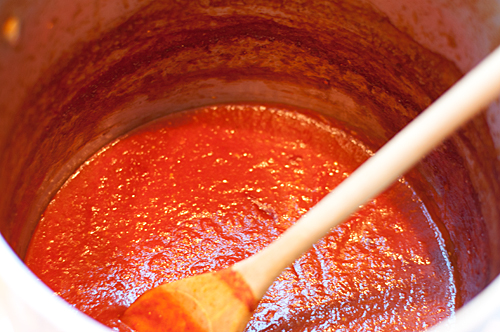 …so I let mine simmer (uncovered – you want the moisture to escape) until it reduced all the way down. See the rings around the pot – it went from about 8 inches up the side of my large stockpot all the way down to about 2 inches up the side. Keep the heat low enough that it doesn’t burn, but you do want it to be bubbling – about medium to medium low – and keep checking the pot every 10 minutes or so. The yield, obviously, is small – I only got about 3 cups of sauce from this project. But it’s tucked safely into the freezer and some cold and snowy night this winter I’m going to be awfully happy that I made this!

I added just a tiny bit of salt to my sauce while it was cooking and that was all. You could easily add herbs while it cooks, then remove them before storing your sauce, to impart some nice flavor as well.