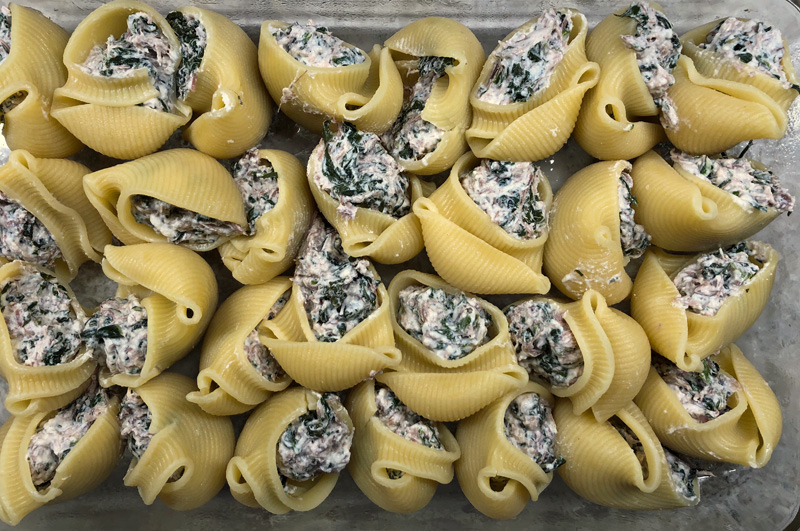 These incredibly perfect stuffed shells were the leftover result of my afterthought for Christmas Eve dinner. And might I add right off the bat, how have I never thought of the idea of brown butter béchamel sauce before?!

I had a whole menu planned for Christmas Eve- pork tenderloin, sautéed apples and onions, rapini, rosemary roasted potatoes – when I noticed the entire head of a pig that’s been sitting in my freezer. Now if that grosses you out, let me just start by saying I won’t be sharing any photos in this post other than the shells above because I must say, staring at that head and cooking it was intimidating even for me. But if you eat meat, IMHO, beyond knowing that the animal was raised and slaughtered humanely, you should use as much of the animal as possible. So when I got a half hog recently from a Colorado rancher, and was asked if I could do something with the head, I said yes. I had no idea what I would do with the head, actually – I had quickly texted my daughter who had made head cheese in culinary school to see if she was game to do something. “Sure, get it!” she texted back excitedly.

Months later that thing was still taking up a shelf in my meat freezer. So I decided to make pork cheek ravioli – something I first had at Babbo in New York – to accompany the menu for Christmas Eve. It was a two day project to handle the head and then make the ravioli, but man was it worth it. Everyone fought over the ravioli at dinner, my daughter in law declaring it “the best thing you’ve ever made!” Having never cooked the head before, I didn’t know how much meat to expect, and I ended up with enough filling to combine with some chopped kale and a bit more ricotta for these stuffed shells. That recipe is at the end of this post and you can skip to that if you intend to use some other meat besides cooking a head.

But, if you need to tackle the head, I was really pleased with how this turned out and an unintended benefit is the rich pork broth you can use for ramen during the winter.

Technique
Place the head into a pot large enough that you will be able to completely cover it with water (I needed to use my large canning pot). Add aromatics (a couple chopped onions, some stalks of chopped celery, a few big fresh bay leaves, a couple of chopped carrots, some peppercorns), cover with water, cover with a lid, and bring to a boil. Reduce heat to simmer and cook until the meat pulls easily from the bone with a fork, about 4-6 hours.

Remove the head to a cutting board (I could have used a second pair of hands to help – that head is heavy and when it’s hot it’s hard to handle) to cool enough to handle. Strain the stock and discard all of the solids. Return the stock to the pot and reduce by about 1/3 to 1/2. Store stock in the freezer in covered containers, but reserve a couple of cups for the step below.

When the meat is cool enough to handle, pull the meat (largely two big pieces of meat on the cheek bones) from the skull and discard everything else (I didn’t use the tongue – you might want to). Put the meat in a covered container and chill.

When the meat is cooled completely (I waited until the next morning), separate out any obviously chunks of fat and gristle and roughly chop the remaining meat. Return the meat to a stock pot and add enough of the stock just to cover it. Simmer for 30-60 minutes – this will both “melt out” any large chunks of fat remaining and tenderize the meat. Remove the meat with a skimmer and use a fork to mash it until it’s all shredded. (I used the remaining stock to make gravy for our dinner.)

Use the meat in ravioli, shells, soups, chili, or sauces. May be frozen.