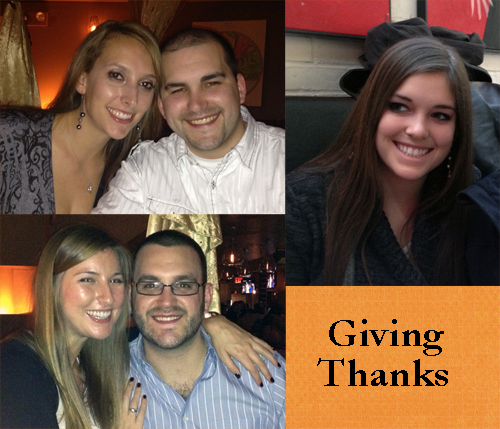 One of the greatest pleasures for a parent is visiting their adult children and seeing them thrive. I’m lucky that one of mine lives in Manhattan (also lucky that two are still close to home here in Colorado), and we took advantage of this to gather the family in NY for the Thanksgiving holiday. If you are lamenting how much you ate for Thanksgiving dinner, imagine dining out in NY for lunch and dinner four days in a row. While the downside is I need to reign in my calories during the most difficult time of year to do that, the upside is I have a smorgasbord of Manhattan restaurants to share with you in this post! 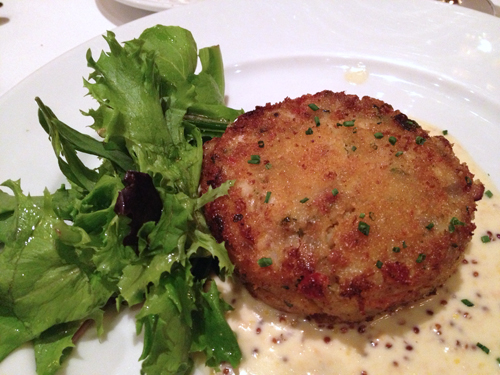 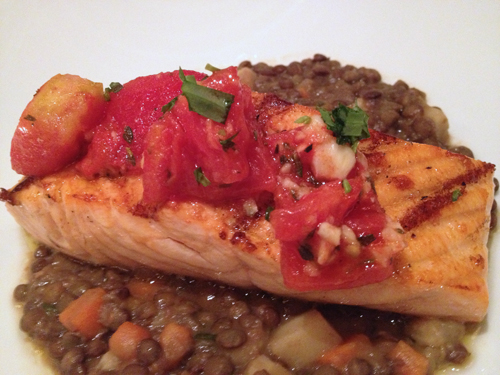 My son Jon (lower left with his girlfriend Keely) planned our Thanksgiving for Porter House, in the Time Warner complex at Columbus Circle, because they had a nice prix fix menu for the holiday. But when given the choice, I had the crab cake appetizer and salmon on a bed of lentils, while most of my family opted for a steak of some sort. The rest of the family pictured above are my oldest son Chris and his girlfriend Katie, plus my “baby”, my daughter Jenny. She’s a rising culinary star who spent a day in the city seeking out culinary externships at high end spots like The Modern, Eleven Madison Park, and Bouley. She’ll be returning soon to do a trail at each of these hoping to land her spot for a 10 week stint in the spring. 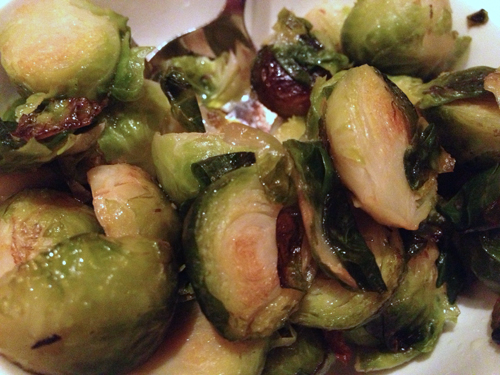 The sides were served family style and were very seasonal: brussels sprouts, creamed spinach, roasted potatoes – so that made it feel a little more like Thanksgiving, as did the restaurant packed with extended families enjoying the time together. 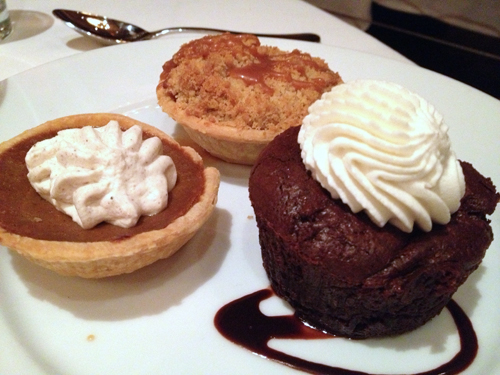 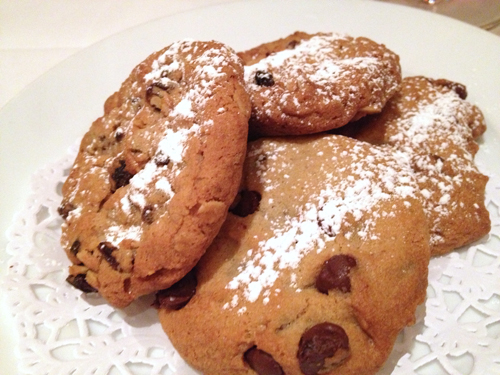 Dessert was over the top – every person was served one of these trio of desserts – apple pie, pumpkin pie and a decadent chocolate cupcake – PLUS the table was served jumbo chocolate chip cookies. One meal down, six to go! 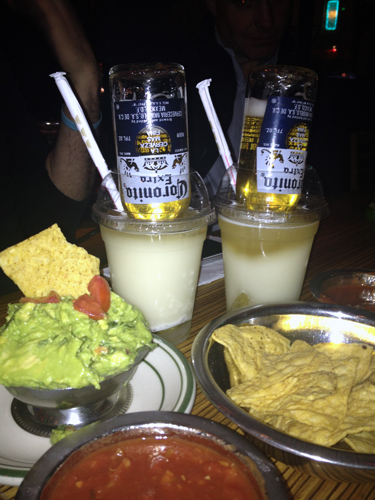 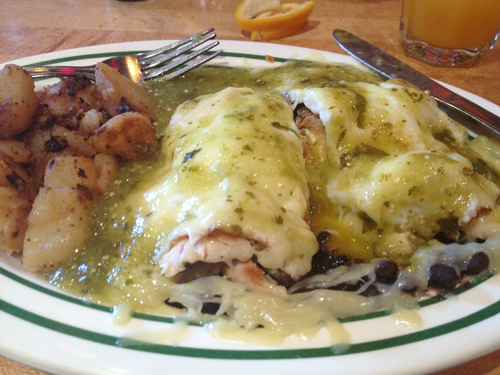 When your nights out in New York include twenty-somethings, they tend to run later than my husband and I would normally plan, and in our case, involved a few more drinks than was probably prudent. So on Friday morning (and by morning I really mean noon-ish), we headed to Blockhead’s on the Upper East Side for a Mexican brunch. They serve these drinks with a small Coronita turned upside down in a frozen margarita (that picture was actually from another afternoon as nobody felt like that was the right brunch drink!), and I had a classic Huevos Verde which really hit the spot. 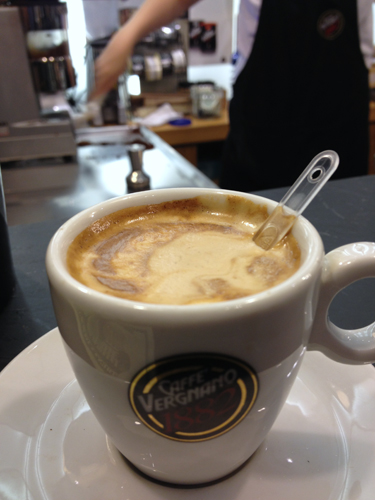 After brunch and a short visit to the new world trade center site, Jenny and I headed out so she could track down chefs and turn in her resume, while the others hoofed it over to the Brooklyn Bridge. As Jenny and I made our way from Tribeca north, we took advantage of being at Madison Square Park to pop into Eataly for an afternoon espresso macchiato pick-me-up. Felt just like being in Italy, but a little more frenzied! 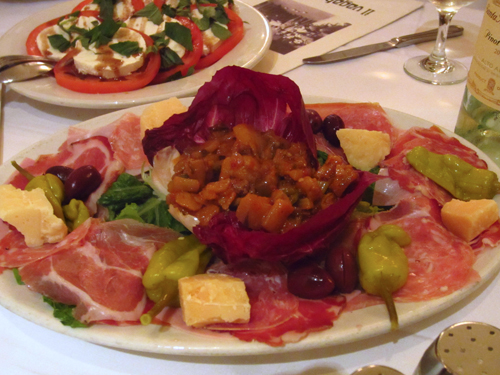 We met up for dinner on Friday night at Il Vagabondo on the Upper East side for our first meeting of Jon’s girlfriend, and settled into the classic Italian spot (that has a bocce ball court inside) for a quintessential NY experience. 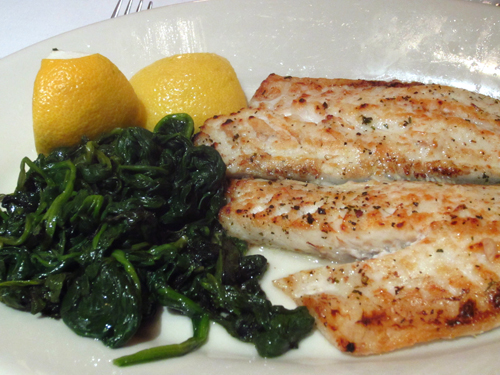 I was really trying to limit my calories, and the branzino with spinach was great… 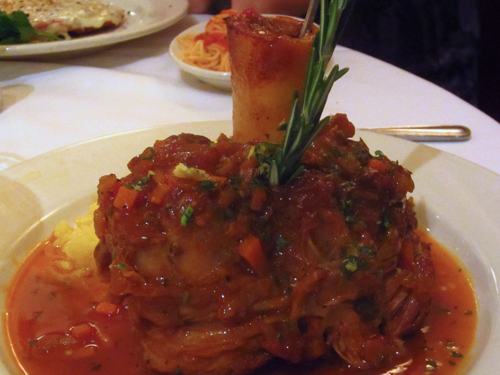 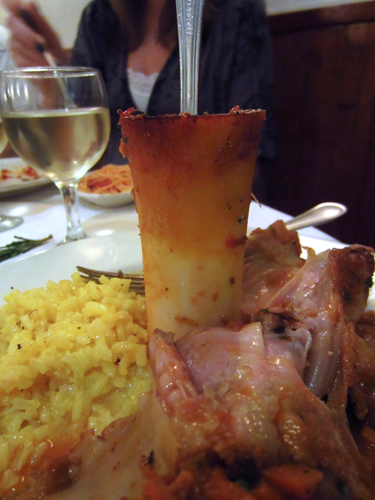 …but could in no way compare to the huge shank of Osso Bucco that Jenny got. I helped her pick off the tender meat that just fell from the bone, but left her alone to scoop out the bone marrow. 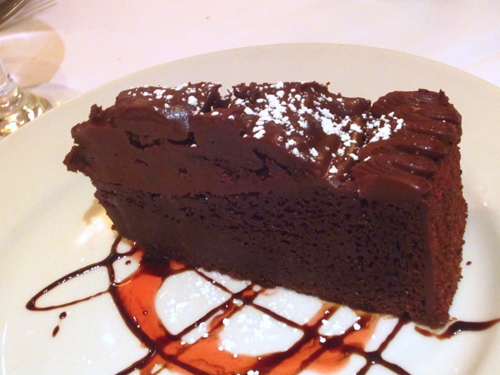 I can’t imagine why we needed dessert after all of that, but the chocolate cake seemed to sit well with most of the group. 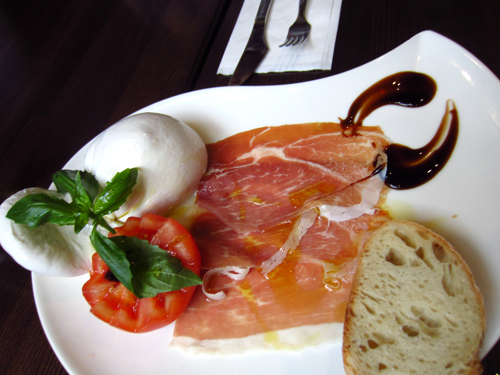 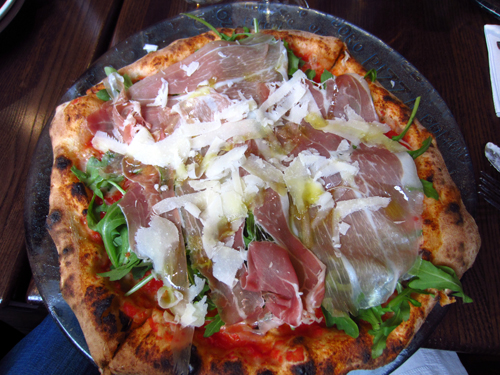 On Saturday we were set to go to Spiderman in the afternoon, and everyone was craving pizza, so Jon booked us at Don Antonio by Starita near the theater district. Turns out the guy running the place was from a pizza spot in Denver – small world. Turns out the pizzas are huge, we should have shared instead of all ordering our own, and we should not have ordered that gorgeous but huge ball of burrata as a starter. BTW, this spot has pretty good gluten free pizza if you’re looking for something like that in the city. 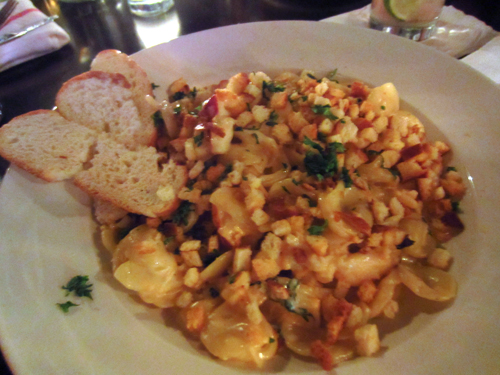 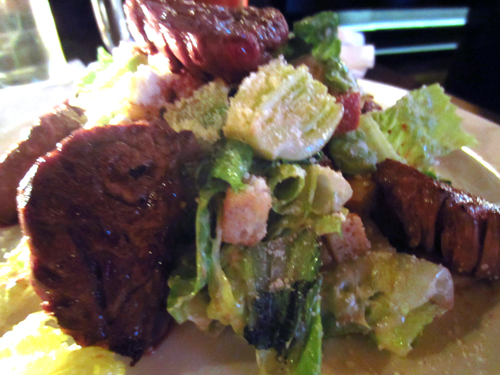 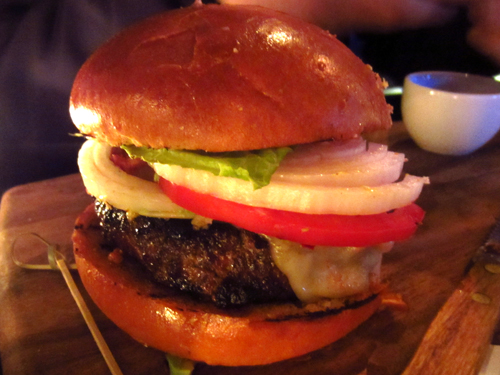 By Saturday night, the group was feeling worn out and just wanted a simple burger joint. We landed on Tavern 29 in midtown, and it completely hit the spot. The lobster mac and cheese that Jenny wanted to share as an appetizer was fair, but the steak Caesar salad was good and the burgers were great. If you come to New York in the summer months, Tavern 29 boasts a rooftop beer garden that looks fun.

New Yorkers take their Sunday brunch very seriously. Blue laws don’t allow the sale of alcohol before noon on Sunday, but once that clock hits 12, many spots offer great brunch deals with bottomless mimosas. Essex in the east village is hugely popular (won the 2012 OpenTable Diner’s Choice award), and you definitely need a reservation unless you want to wait for an hour or two. They start you off with mimosas, screwdrivers, or bloody marys and these really yummy onion rolls.

They feature alot of interesting benedicts, like lobster or spinach or the classic with ham, but I opted for a spinach and goat cheese omelet. 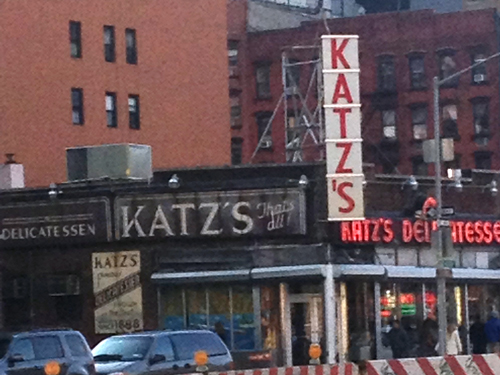 If this kind of brunch isn’t your thing, Katz’s Deli has been around forever – literally, since 1988 – and credit their long history with the simple fact that they think they are the best deli in Manhattan. Right around the corner from them is Sidebar, a slightly upscale sports bar, that we settled into for a Sunday afternoon of football. In a place like NY, bars are known for being friendly to a variety of teams from around the country, and it turns out that Sidebar had an entire room and 4 large screen TVs devoted to the Broncos – and just happened to have a large table in the center for our group. Perfect! 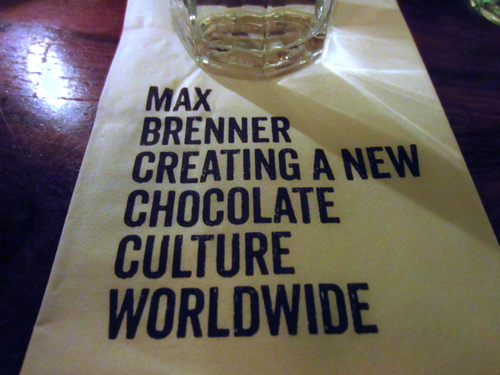 It’s hard to imagine we even needed dinner by Sunday night, but we ventured out anyway to Max Brenner, the place that’s a weird mix of chocolate shop and restaurant, offering about a dozen cocktails with some sort of chocolate in them. 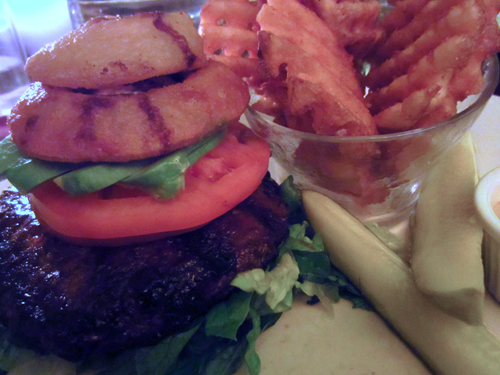 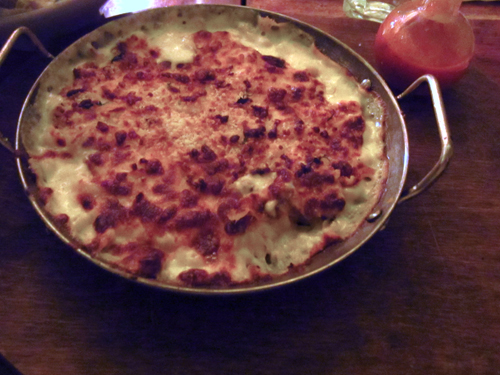 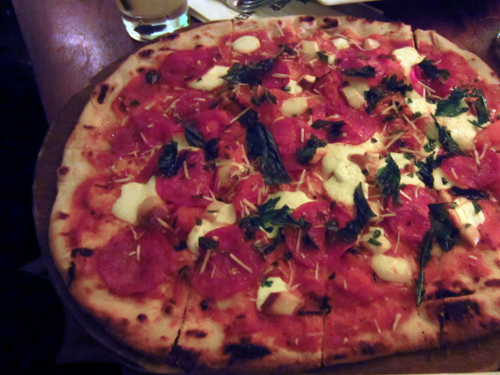 Although we all should have been way beyond eating at this point in our weekend, we managed to polish off a Wagyu burger sans bun with incredible waffle fries dusted with cocoa (me), a decadent mac and cheese that came with bacon and marinara sauce to stir into it (my son Jon), a pizza (my daughter), and more (the rest of the group). 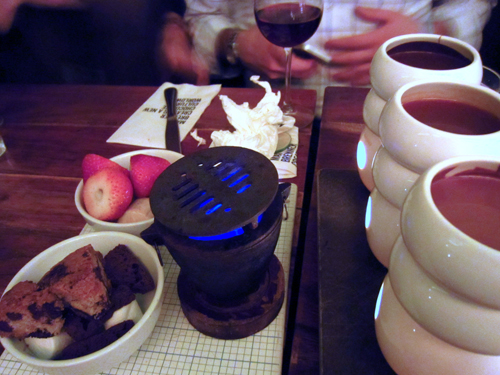 I’m pretty sure we were all stuffed at this point, but did we let that deter us? Absolutely not! Whether you call us foodies or gluttons, we managed to find a way to share the chocolate fondue at the end of the meal. The three small pots contained dark chocolate, milk chocolate, and caramel sauce, and the platter included marshmallows, cookies, brownies, strawberries and bananas. I had one half of one strawberry dipped in dark chocolate and called it THE END. I hope that your Thanksgiving was as full of love as mine was!