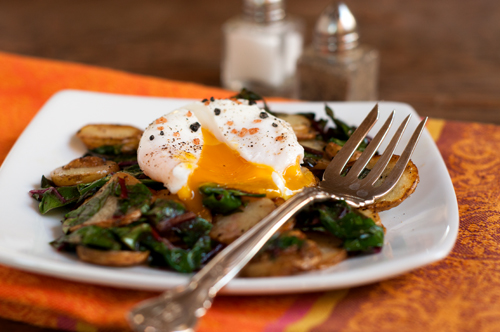 How do you get a perfectly poached egg? I mean, without years of culinary training and practice. It’s one of those things that is very hard to achieve, which is why chefs are often asked to cook this in their stage before being hired on. Personally, I stink at it, so had pretty much given up on the perfect soft cooked egg with a runny center and subsist on over easy eggs in the pan instead. But not any more – not since I got a sous vide machine from Sous Vide Supreme last month! 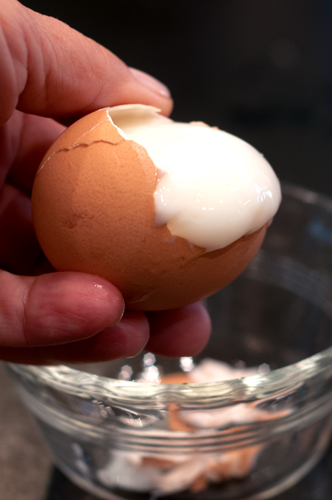 Let me just say up front that I stole this technique from The Food Lab. If you visit his post, you’ll find far more science, research and information than I could ever impart. But I did take away a few key points:

After the sous vide (45 minutes, 145 degrees), tap the shell and break away some shell from one side (top photo), then gently pour it into a small bowl (this photo). See the difference between the loose and tight whites? 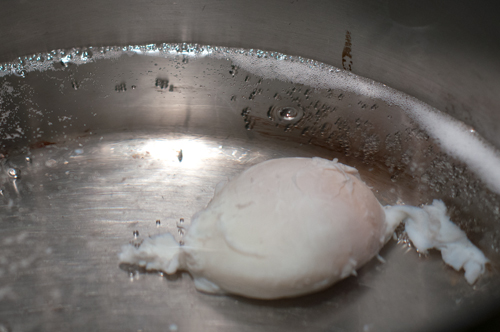 Then pour it gently into water heated to just under simmering. Let the loose whites do what they want in the pan and then ignore them. After just 15-20 seconds, you can scoop the now slightly firmer poached egg out with a slotted spoon to serve it. I’m on the hook to offer up some recipes in return for the machine I was sent, so I created this great brunch item. The recipe serves 1, but you can scale it for a large brunch party easily in a large skillet. I’m so tickled with this technique that this just might become my new morning routine: preheat sous vide machine, make coffee, insert egg into sous vide, read email and catch up on Facebook for 30 minutes, make something to go with my eggs like has or toast, then finish the soft cooked egg off with a final water bath poach, and voila, that’s what I call breakfast!