An Amateur at Le Cordon Bleu 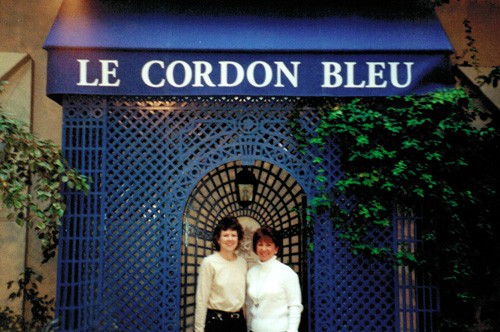 Cuisine des Amis. The one-day course at Le Cordon Bleu called Cooking with Friends sounded basic enough, so when I found I had a day to myself in Paris on a cold winter day in February of 2001, I quickly signed up. Although I had no idea at the time, I had just set in motion events that would lead me on a life-changing journey.

In this early stage of my love affair with all things food-oriented, before I think the word “foodie” had even taken hold in our pop culture, the thought of taking a class at the acclaimed cooking school in Paris had me giddy with excitement. The school was only a short metro ride away from my hotel, and I made my way through the narrow streets of a quiet Parisian neighborhood looking for the address, anxious that I would be late for my lesson, and not entirely sure what the day would be like. Based on the larger than life reputation of Le Cordon Bleu, I expected an equally large school, and was surprised to find that No 8. Rue Lèon Delhomme boasted only a tiny storefront window with a small blue and white sign identifying the building as the school.

I signed in as requested and picked up a packet of information and an apron, and as I wandered nervously around the lobby area, glancing at photos of spectacular food creations, I wondered whether I had gotten in over my head. I certainly had good reason to be uneasy – this French institution had been operating for over 100 years and had turned out a bevy of world of famous chefs, including none other than Julia Child herself. Promptly at 8:30 a woman ushered us into the main teaching forum, a small auditorium style room with a cooking area front and center. As I squeezed into the tight row of chairs with small desk arms attached and took my seat I figured, no turning back now! 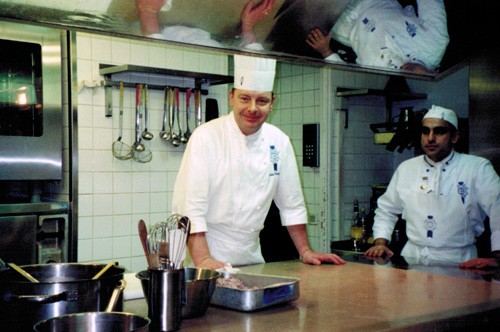 Chef Didier Chantefort quickly reviewed the menu for the day, in French no less: cuisses de grenouilles poêlées à la purée d’ail et just vert (frogs legs sautéed with garlic puree and green jus), fricassée de porc à la Grecque, pommes duchesse (Greek style pork fricassee, duchesse potatoes), and gaufre aux pommes et miel, glace à la vanille bourbon (apple and honey waffle, bourbon vanilla ice cream). As the chef presented, it became clear that the French staff at Le Cordon Bleu had a bit of attitude and some edge to their personalities. Whether it was just the cultural difference in communication style or something much deeper, the lesson gave the impression I should feel lucky just to have been admitted into this famous institution, if only for a few hours. Although the English interpreter rapidly repeated the chef’s comments, I found it was actually easier to watch the chef and take notes about what I saw rather than to try to understand the choppy interpretation of his lecture, so I let her words wash over me like background music.

The chef demonstrated the preparation of all four recipes for us, providing a taste of each for the students in the audience. Although I wasn’t particularly looking forward to it, I tentatively nibbled on the frog’s leg, pleased to find that I enjoyed the delicate sweet taste, and I was reminded instantly of my own mom’s foray into French cuisine when we were kids – imagine our shock to be served frogs’ legs in a small Midwestern town in Indiana in the 60s!

The tasting continued with a small morsel of tender pork and decadent potatoes and finished with a bite of a warm, aromatic waffle topped with silky ice cream. Although the tasting had merely whet my appetite, I soon realized this sampling session of four small bites was meant to fill in for lunch (no wonder the French are thin) and the conclusion of the tasting signaled the end of the lecture. Time to begin cooking!

We moved from the classroom into a small kitchen upstairs where we would cook our own version of the pork fricassée and duchesse potatoes that had been demonstrated. Although I was only a little nervous during the lecture, I now found myself completely intimidated in this kitchen. With my very best posture I stand a mere 5 feet tall, and the chef towered over me at 6 feet 2 inches, and insisted on speaking only in French, and always very rapidly.

After staring at each other for a couple of minutes, the students in our group realized he expected us to jump in and start cooking based on what we had learned in the lecture. So with my notes from the morning and a pile of pork and vegetables in front of me, I began. Cube pork shoulder. Lightly salt and pepper. Brown in a large skillet. Sweat garnish of carrots, onions, celery and bouquet garni in sauté pan. Deglaze pan. Reduce. Add meat and tomato paste. Dust with flour. Peel and cube potatoes.

I was moving along at a good clip, following my lecture notes and checking in with the assistant occasionally, when it happened. The chef tried to tell me something about the potatoes, not realizing – or most likely not caring – that I couldn’t understand a word of French. In an effort to communicate with him, I tried to demonstrate what I thought he was trying to tell me, how to use the knife properly to cut the potato, at the very same time he reached in front of me across my cutting board to intervene. My knife came down right on the back of his hand and cut him, inflicting a wound that was small, but deep enough to draw blood and leave me completely horrified.

The chef brushed it off (or maybe he brushed me off) and loosely covered the wound with a bandage clearly too small to hide the cut, reminding me all afternoon of what I had done to him. All of the other students could easily see the trickle of blood on his hand, and I was convinced this was meant to further intimidate me. With his slightly bloodied hand he motioned for me to continue cooking, and so I did, learning a great deal as I cooked: how to remove the membrane from red peppers and slice them uniformly, the concept of pairing sauce color to the meat and vegetables it’s intended to accompany, how to make veal stock from roasted veal bones, that potatoes should be passed gently through a food mill or ricer to prevent them from becoming gummy, how to use parchment paper to retain moisture while roasting and, most surprisingly to me, that not only was I having fun, I was actually beginning to feel comfortable cooking at the famous Le Cordon Bleu. 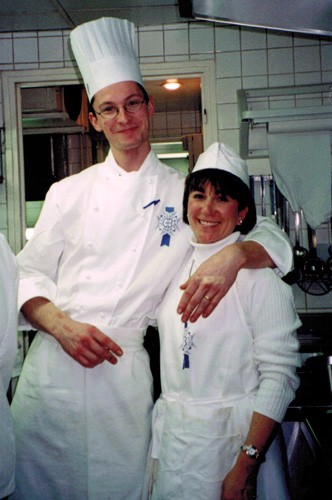 When we finished our dishes, the chef tasted each one, concluding that my fricassée was too salty – not surprising, as it was clear he was still trying to punish me. Certain he was just getting even for the knife incident, I refused to allow his comments to deter me. In fact, I made a point of getting a photo of myself with him, bandaged and bloodied hand in full view, prior to leaving with the dishes I had prepared.

I rode the Metro back to my hotel, the smell of pork fricassée wafting through the enclosed subway car, with a strong sense of accomplishment and the knowledge that this wouldn’t be my last cooking lesson. I had awakened my desire to enhance my culinary skills, had unleashed my passion for cooking that had been kept subdued for years, and had begun the training that would eventually lead me to launch my own culinary business. The experience of cooking at Le Cordon Bleu, learning new skills while immersed in a foreign culture, did not end with the class that day. Rather, it was only the beginning of the journey, and for that I owe a great thanks to Chef Chantefort. Merci Chef!