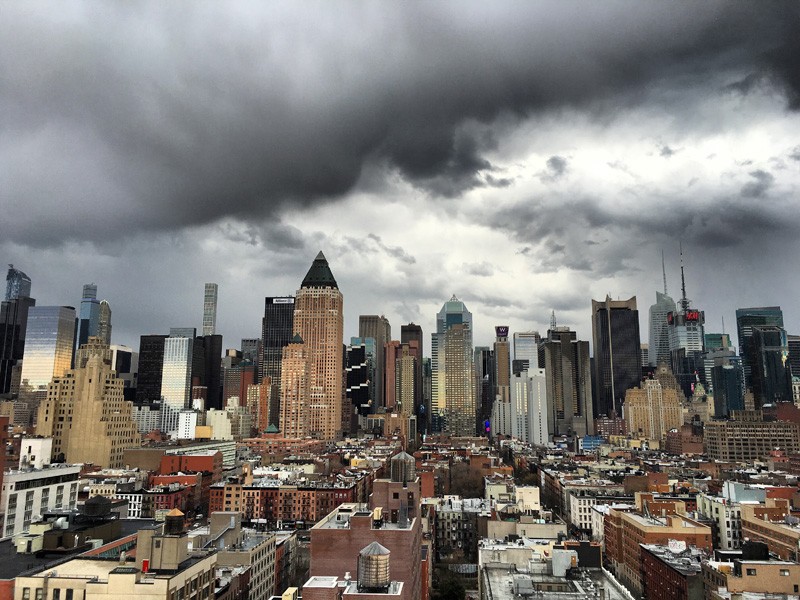 One of the very best things about having a son living in New York is the restaurants we experience every time we visit him. (The worst part, obviously, is that he’s so far away and we don’t see him and his girl nearly as much as we’d like to.) 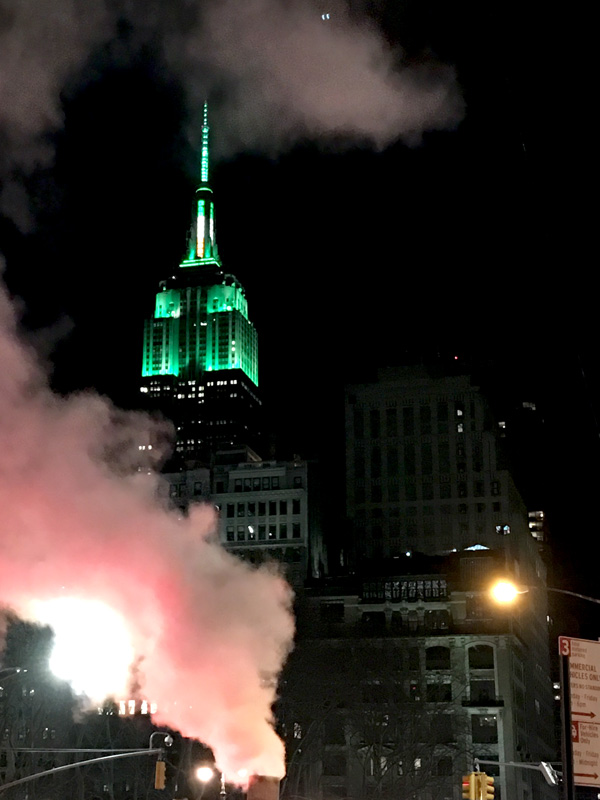 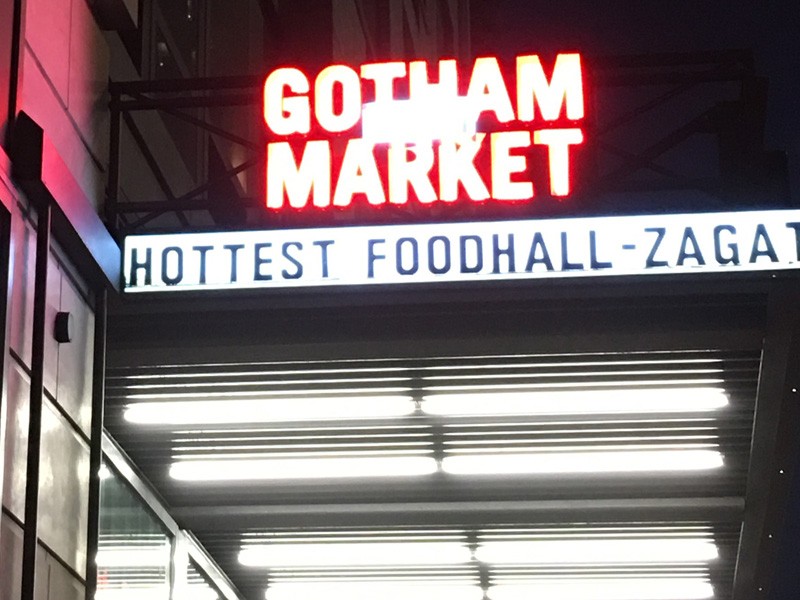 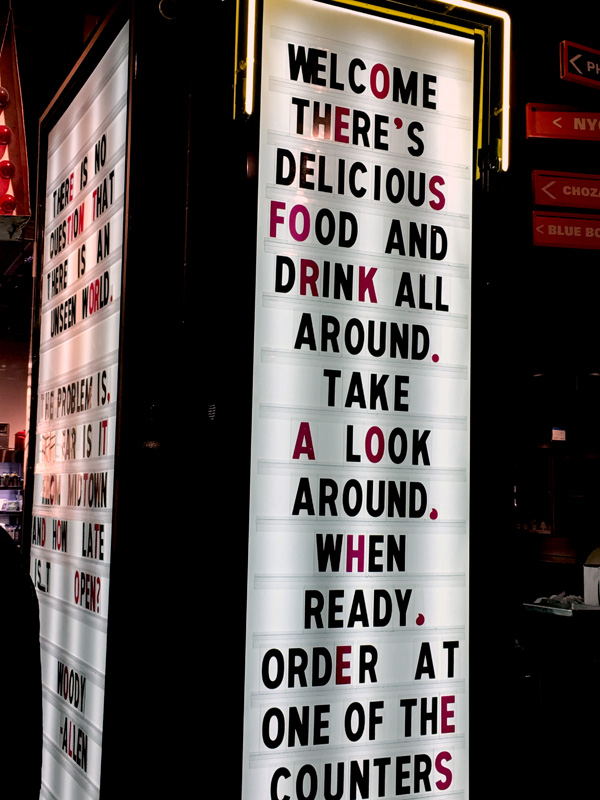 On our most recent visit we arrived on St. Patrick’s Day, and decided to meet up for a drink and some snacks since we couldn’t get into a restaurant until late. Gotham West Market, which happens to be in the part of Hell’s Kitchen near my son that has been revitalizing, is one of these new places like Avanti in Denver – a bunch of food stalls and bars crammed into one space, so you can pick and choose, order at the counter, and then sit down to eat. 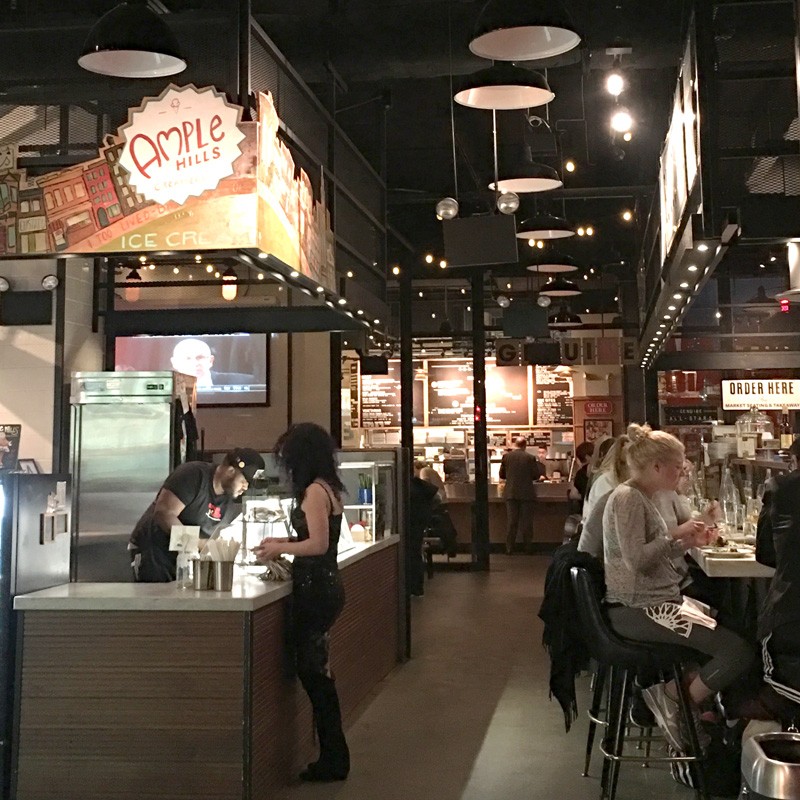 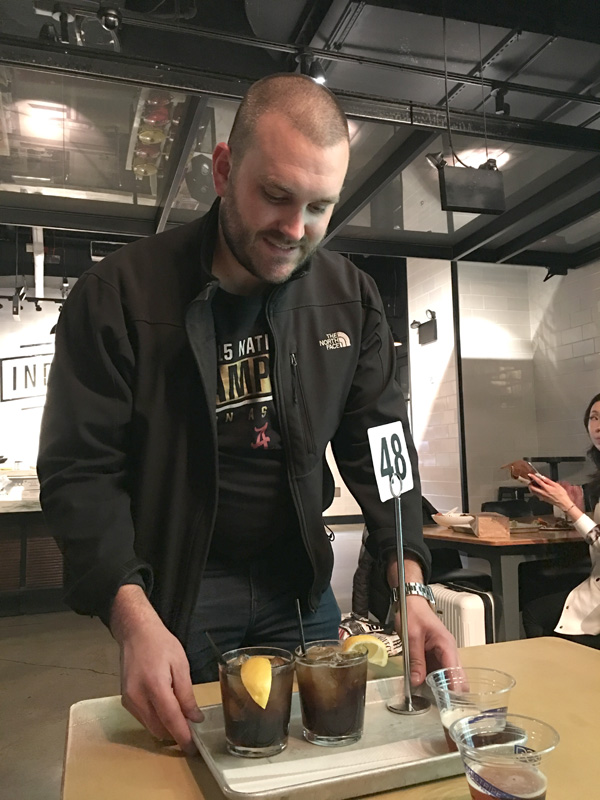 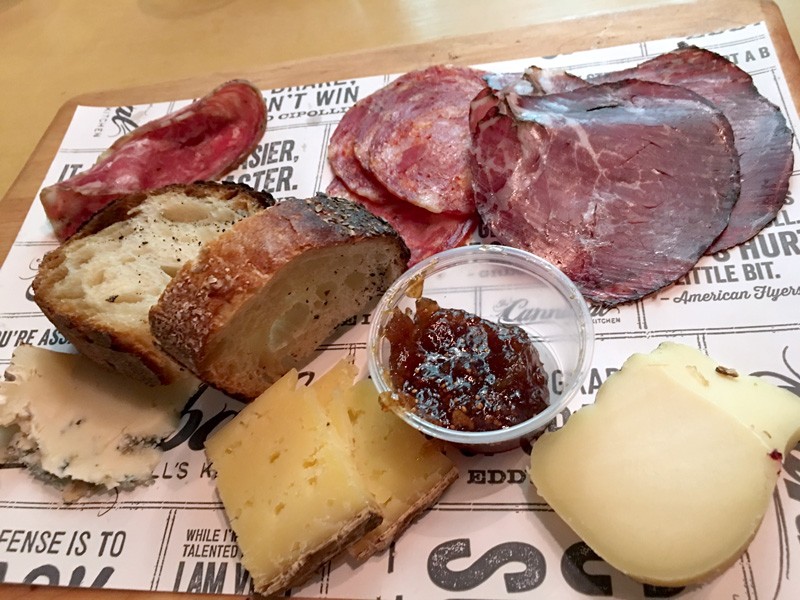 You’ll play your own waiter here, but save some money on things like this delectable charcuterie platter. 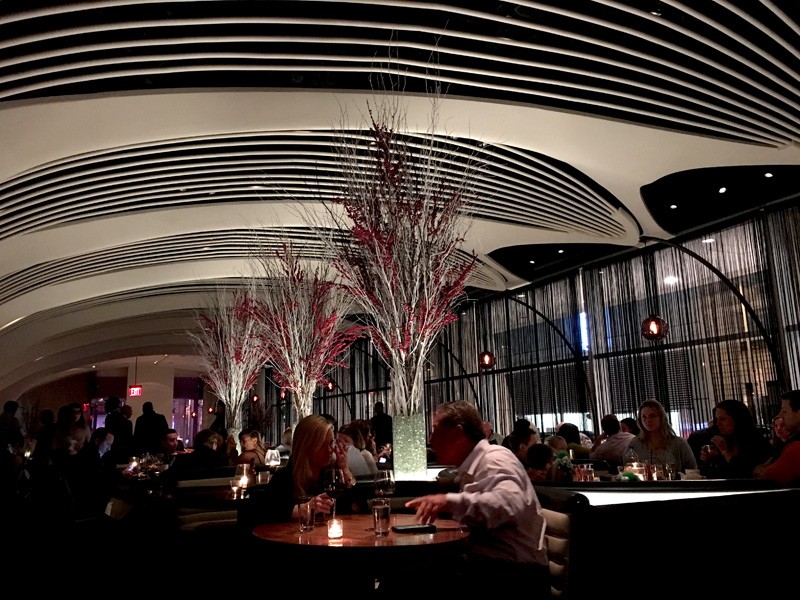 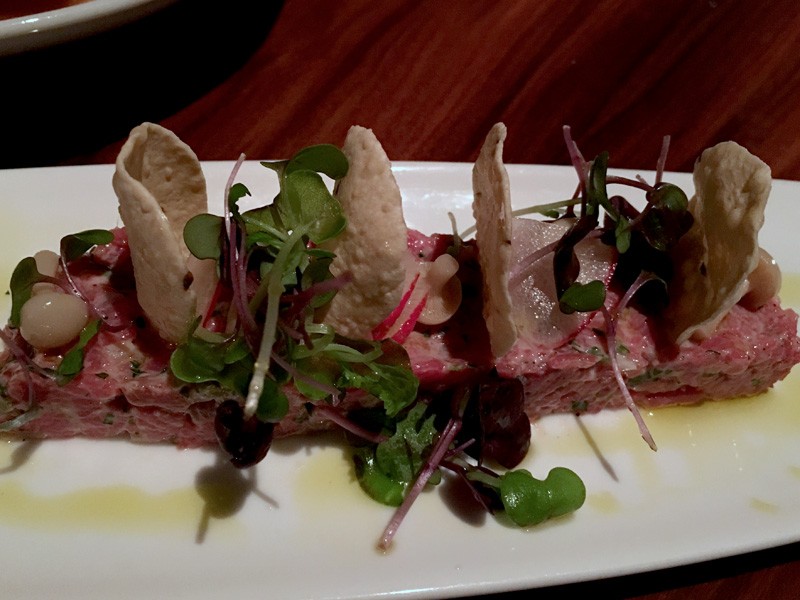 For dinner we got a late reservation at STK Midtown. Although I like the food here, be careful: it’s loud, your waiter may not hear what you ordered, and you might not notice they poured you a $300 bottle of champagne. Yep, that’s what happened, and we didn’t figure it out until we had drunk the bottle – a little late to complain. STK seems to be filled with a lot of older men dating younger women, which doesn’t endear it to me, but I do love their steak tartare! 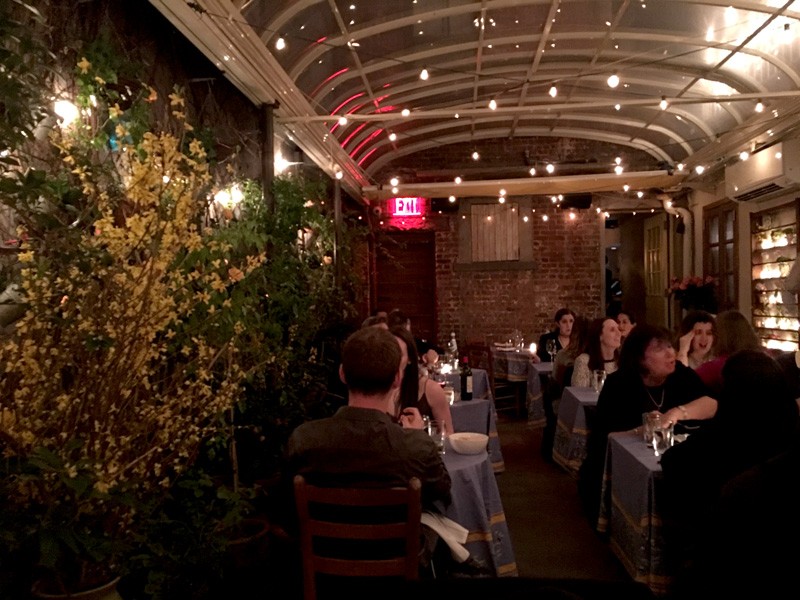 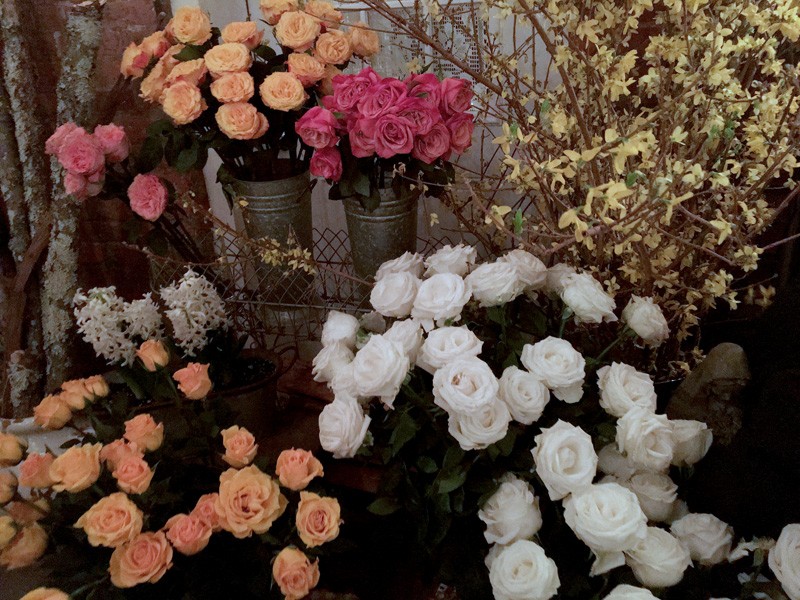 On Friday night we had a lovely dinner at Palma on Cornelia Street in the heart of Greenwich Village. I haven’t been in a dining room this charming in a long time – it was loaded with little twinkling lights and tubs and tubs of fresh flowers, mostly these fragrant roses. 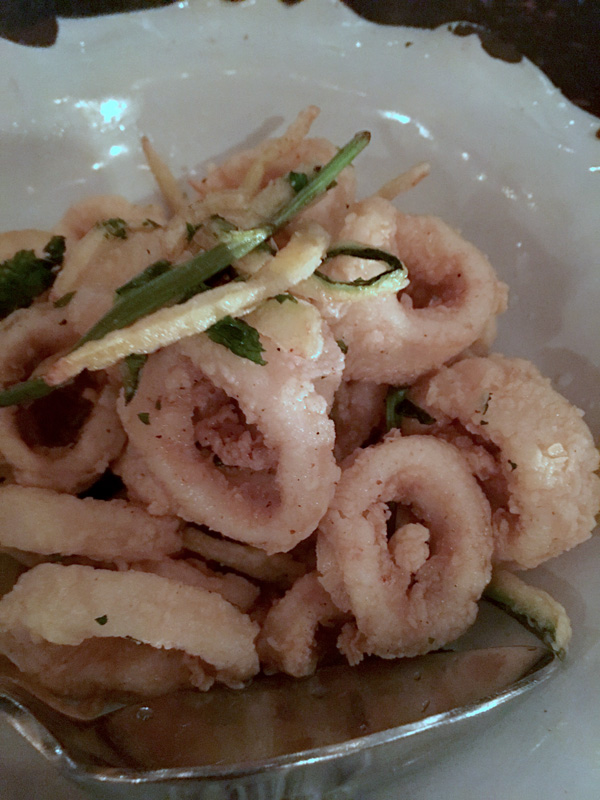 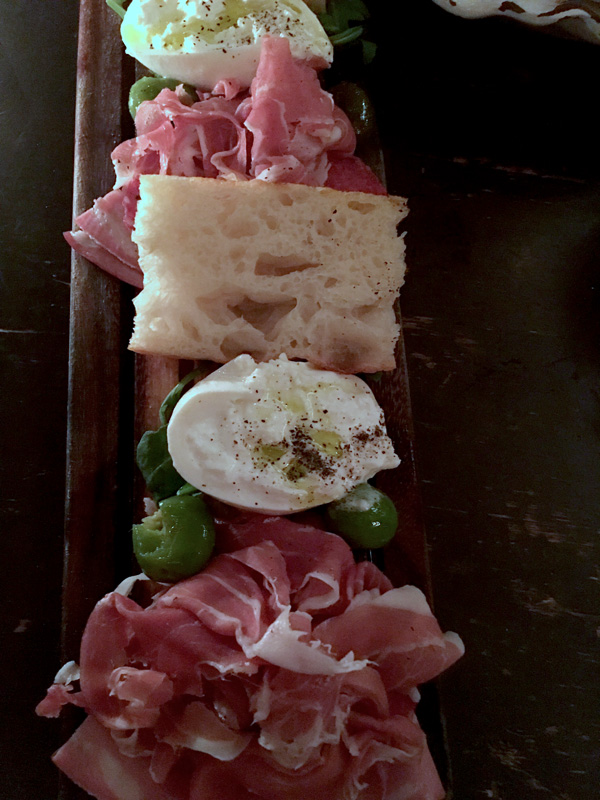 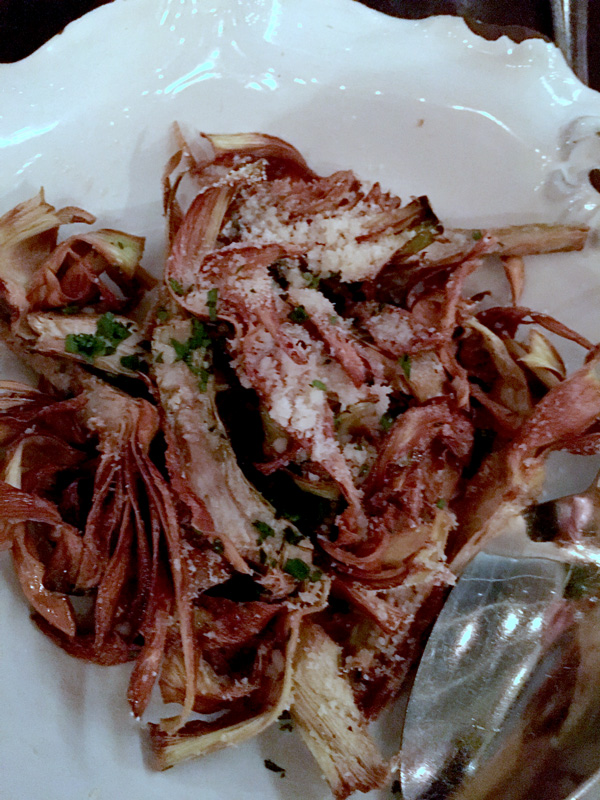 We shared some burrata and prosciutto along with calamari fritti and carciofi fritti – it’s artichoke season in Rome, and having these in NY eased the envy I keep feeling every time my Italian friends post pictures of their artichokes. 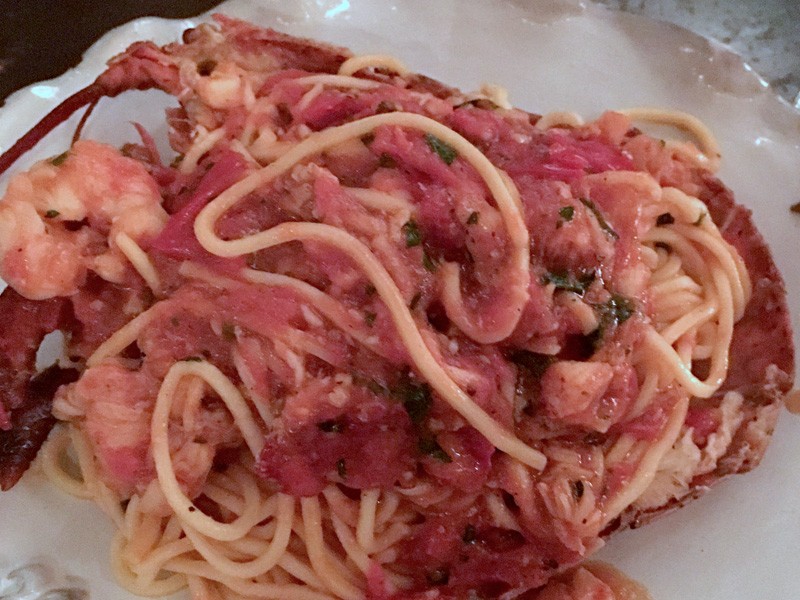 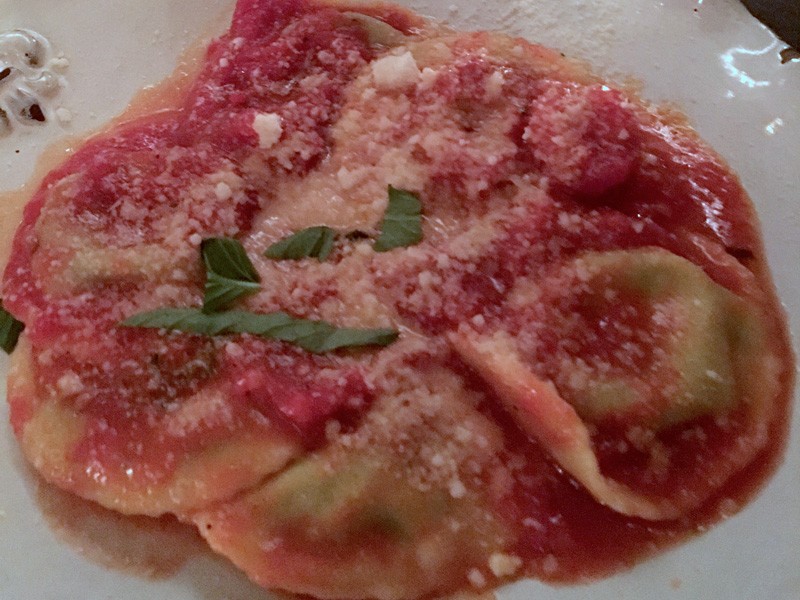 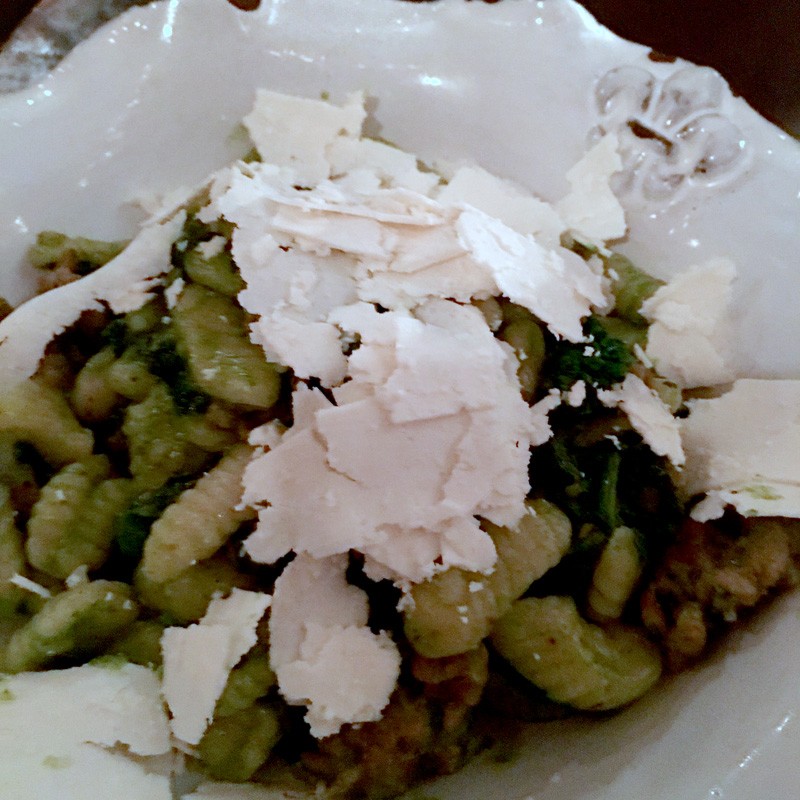 The pasta dishes here are done in the classic style of the regions of Italy they are from: linguini with fettuccine and lobster fra diavolo, agnolotti stuffed with cheese and herbs and finished with a stellar marinara sauce, and orecchiette with broccoli rabe and shave ricotta salt cheese. 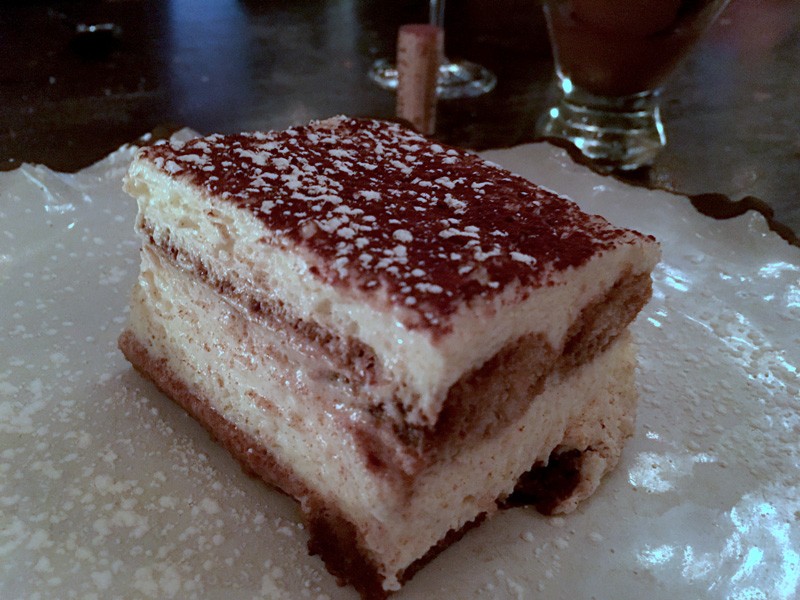 I’m not usually one to order dessert, but my son’s wife and my other son’s girlfriend as well as my husband all have a big sweet tooth – but this tiramisu was big enough to share. 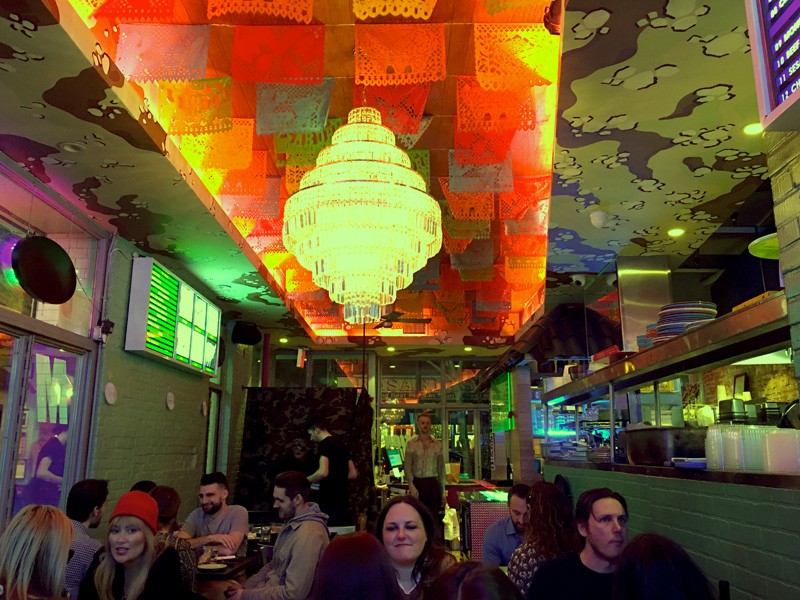 On Saturday night in the city, we made our way to Mission Cantina, Danny Bowien’s Mexican restaurant that they say is “inspired by living in San Francisco and his whirlwind trip to Mexico City”. I found it an odd menu, as it has both Chinese and Mexican dishes on the same menu, and in some cases mixed into the same dish. I’m not saying it’s not good – just odd. (In fact, check out their website image and you’ll see that I think they are intentionally odd, definitely running to the “goth” side.) 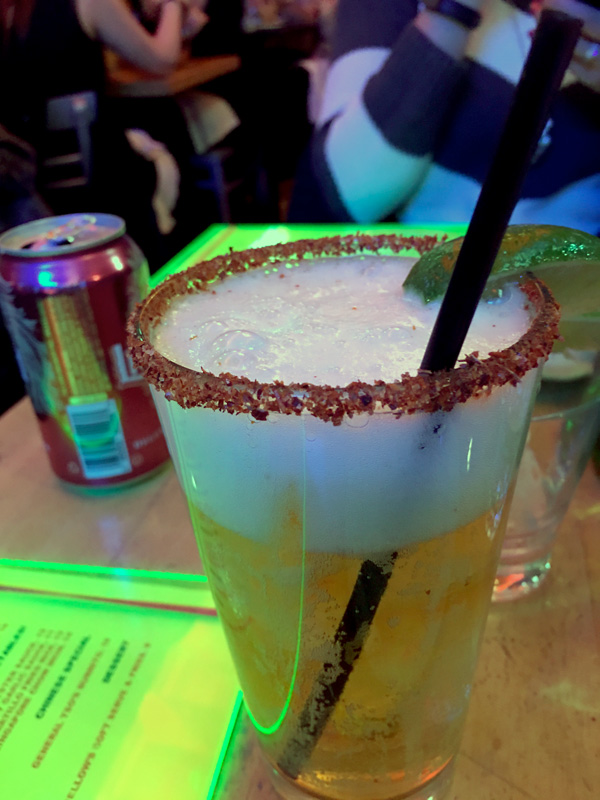 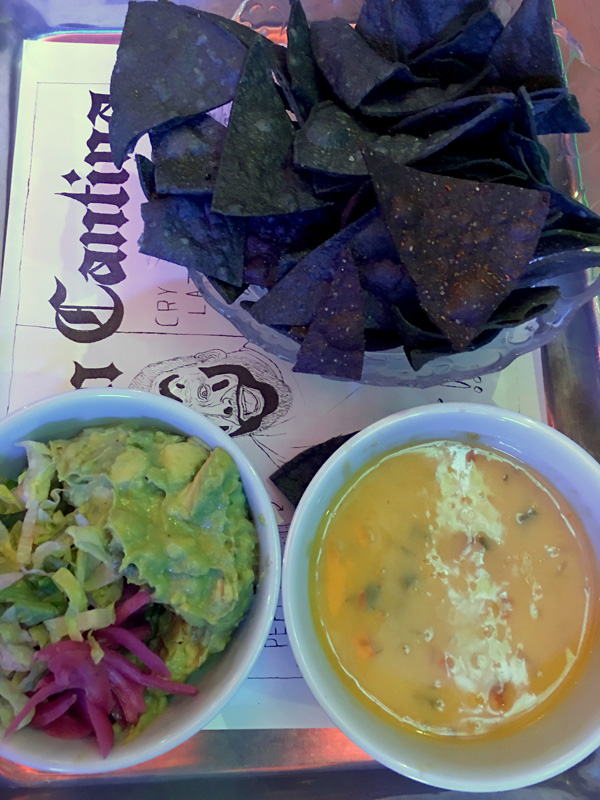 We started out with the chips with queso and guacamole, but you can also just get a larger order of guacamole that you mash yourself table side – kind of wish we had done that. If you don’t like tequila like me, but do like a Mexican style beer, try a child, beer on ice with salt (in this case chile salt) on the rim and lime juice. 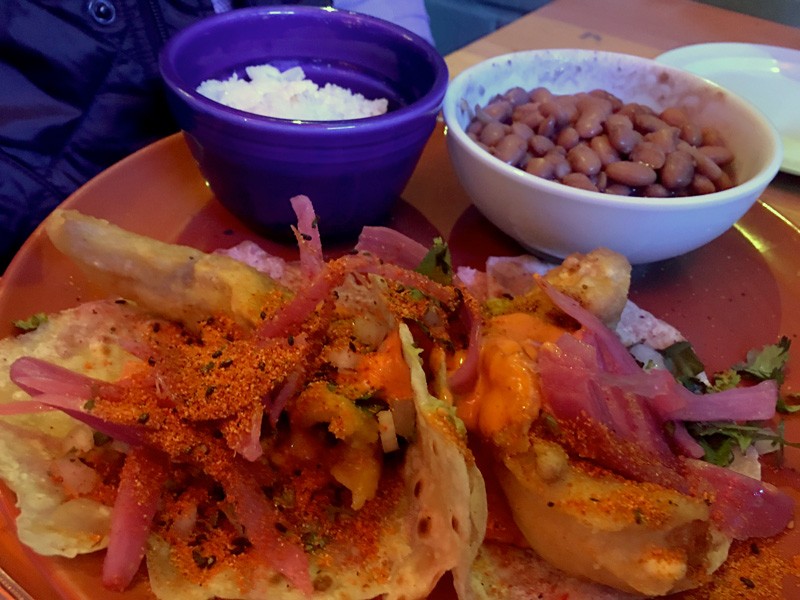 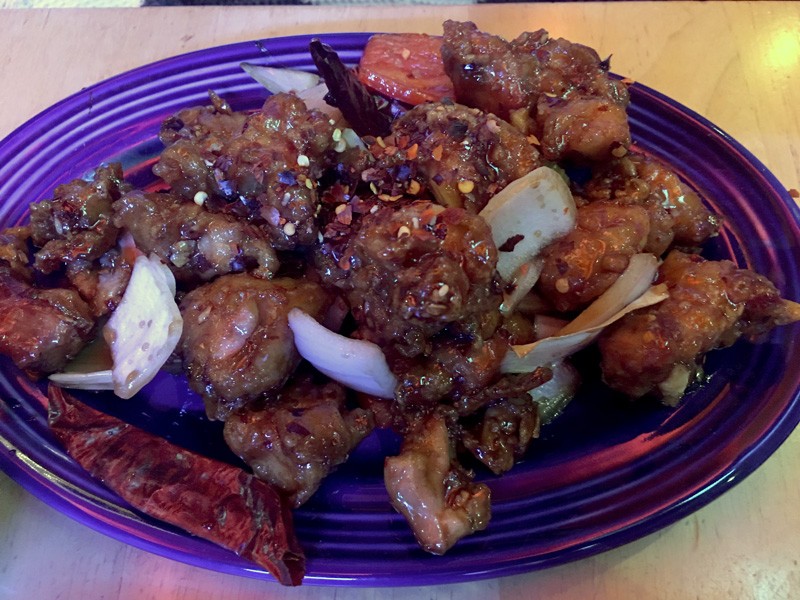 …while my daughter in law had General Tsao’s Chicken, clearly the Chinese side. I couldn’t wrap my head around trying them both in one meal. 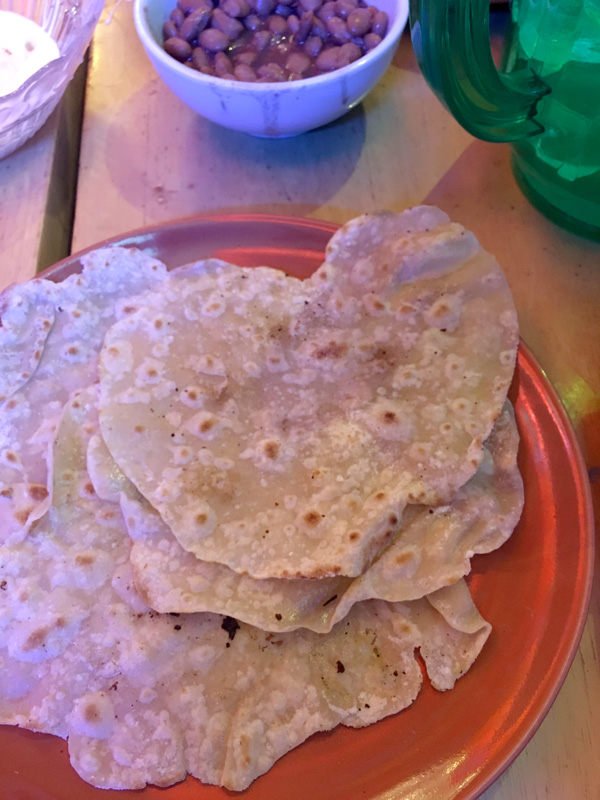 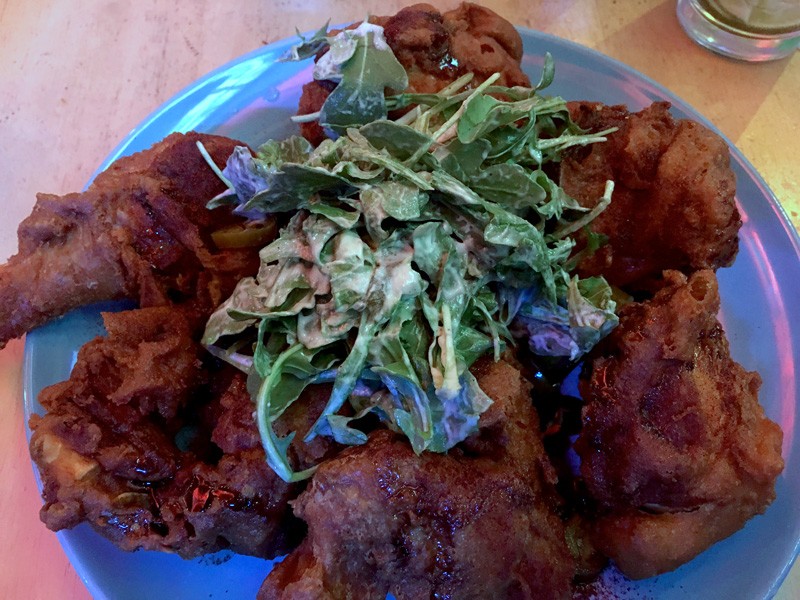 So instead, I opted for perhaps the strangest thing on the menu here – although the server assured me it was among the most popular dishes to order – the fried chicken. See that plate? It’s literally I think a full chicken fried up crispy, served with, oddly again, a Caesar salad in the middle, and we order (again on the server’s suggestion) the homemade tortillas and cream to wrap morsels of the fried chicken in. Well, the fried chicken is tasty, but in a kitchen this small with a dish this popular, we waited literally for 30 minutes after the other dishes were served for mine to arrive. They kindly served the table another pitcher of margaritas on the house – frankly, the last thing my kids needed at that point! Although again I like the food at Mission Cantina, I’m still having trouble wrapping my head around the menu concept, and the tiny space, loud and slow, was probably enough for me to go to just once.