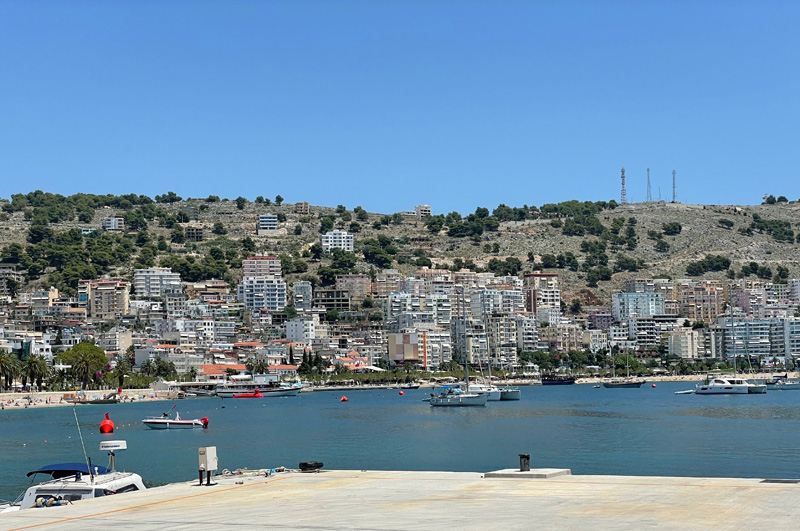 The port town of Saranda is a bit depressing looking after the beautiful island of Corfu
Travel doesn’t always go as planned, but in even the most bizarre twists, I try to keep my sense of humor and know that I’m going to have a story to tell. Our very brief stint in Albania this summer was one of those experiences. After 5 days in Corfu for a friend’s wedding, we took the short ferry ride to Albania to pick up the rental car we had reserved for driving up the coast, but upon arrival learned there were no more rental car agencies here and our reservation had been cancelled. Melting in the 95 degree heat, we ducked into a travel stand where the woman helped us contact Avis. Not to worry, she told us, a representative was coming to help us.

He arrived in what was clearly a personal car, not a rental, and jumped out with what looked like his grandfather, removed a car seat, and took us into his air conditioned office to complete the paperwork. “Things are complicated here,” he shared, “but not to worry I have a car for you. It’s going to cost 1000 euros, and we can only accept cash.” Wow, for five days? Not having another option, I gave him the entire handful of cash I had just withdrawn before leaving Corfu, and we got into the car. There were cigarettes in the door, 130,000 km on the odometer, and no gas in the tank. Well, at least we have a car and thankfully I can drive a stick shift! 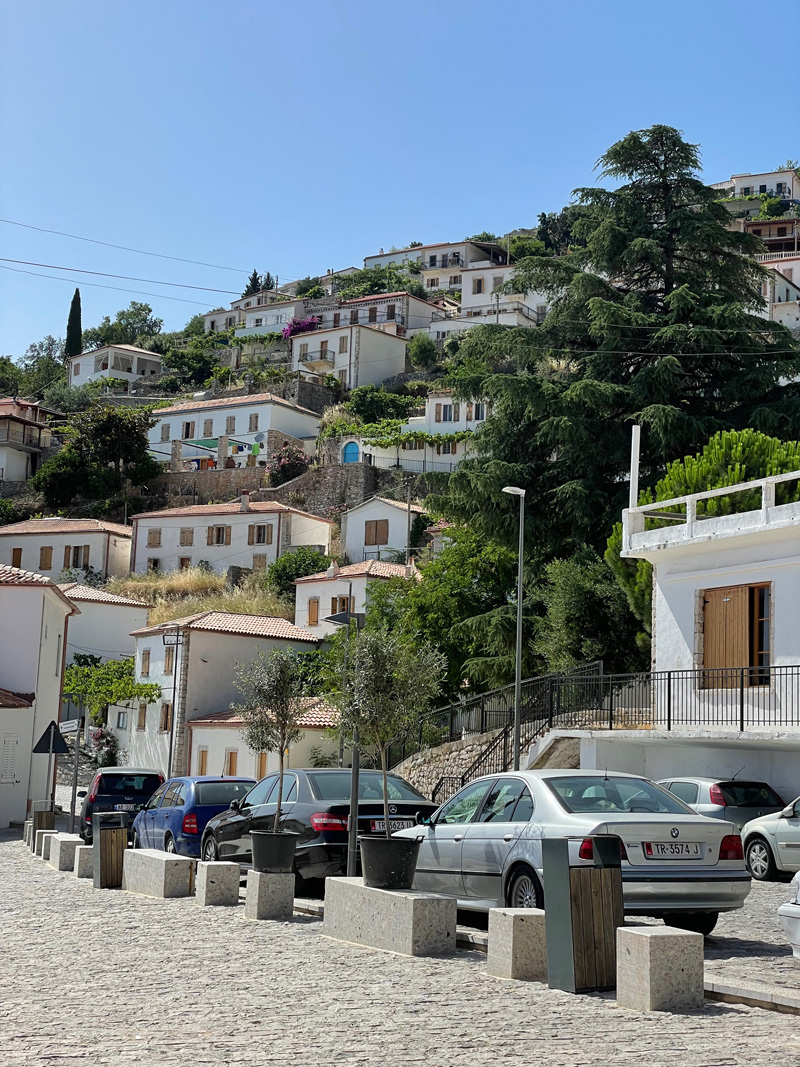 Street View from the Shotgun Hostel in Vunu, Albania
As we were leaving Saranda he told us to fill the car up with gas on the way out of town and that we couldn’t miss the signs for the highway to take us to northern Albania where we planned to spend two nights at a beach resort. We filled up and were on our way, tracking the 3 1/2 hour journey on our phone maps. But as we drove, the time to destination kept getting longer, not shorter, so when we hit this small town of Vunu and noticed a tiny sort of bistro at the hostel, we stopped for something to eat and to figure out where we were. 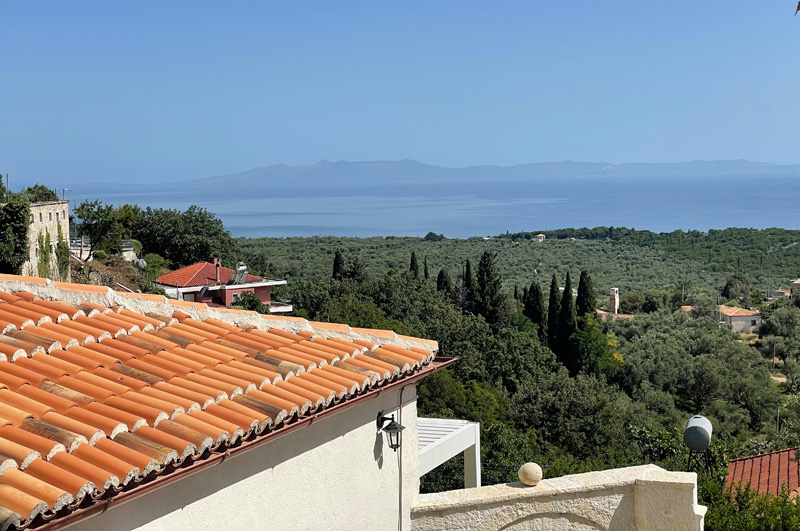 Coastal views from Vunu, Albania, with the island of Corfu in the distance 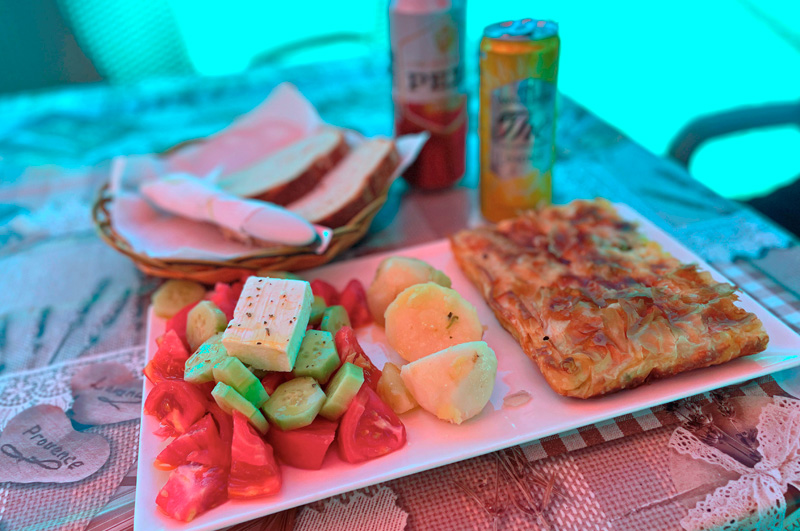 Lunch for two: greek salad, potatoes with olive oil, and byrek, a typical dish of this area (phyllo dough pastry filled with pasta,
cheese and hard cooked eggs), with a beer and an iced tea, all for just 9 euros!
As we enjoyed this simple but delicious lunch, we studied the map on the phone and realized that it actually was possible to miss the sign for the highway and instead of driving the fast route on the highway, we were on the long route over the mountain. We were hours past our missed turn, so we hopped back in the car to continue our drive over the mountain, at this point worried about even reaching our destination in time for dinner. 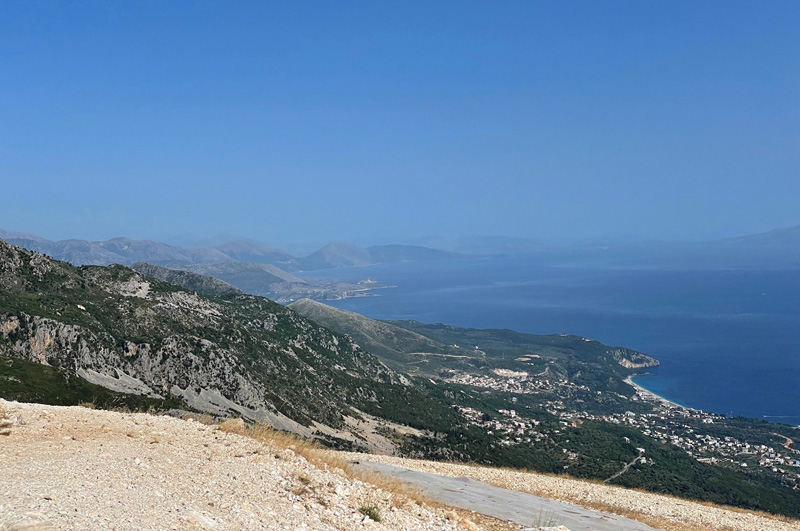 Llogara Pass, through Llogara National Forest
The drive ended up taking us up and over Llogara Pass, a slow climb on a narrow road with single lanes of traffic. 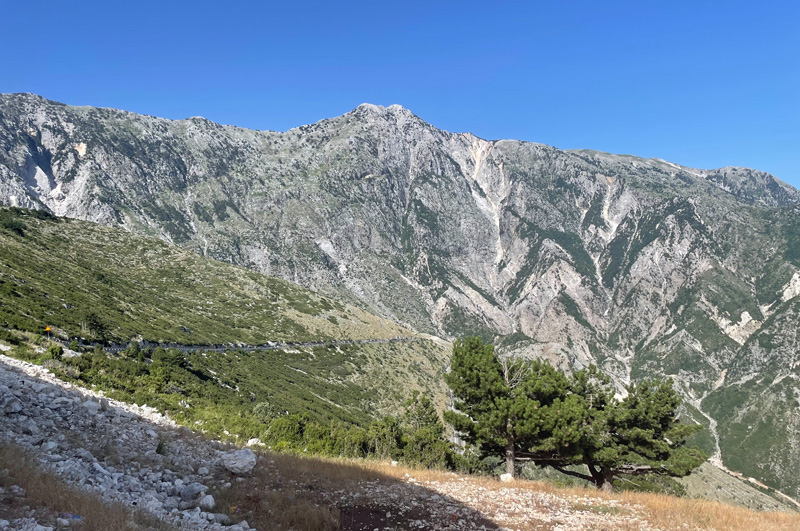 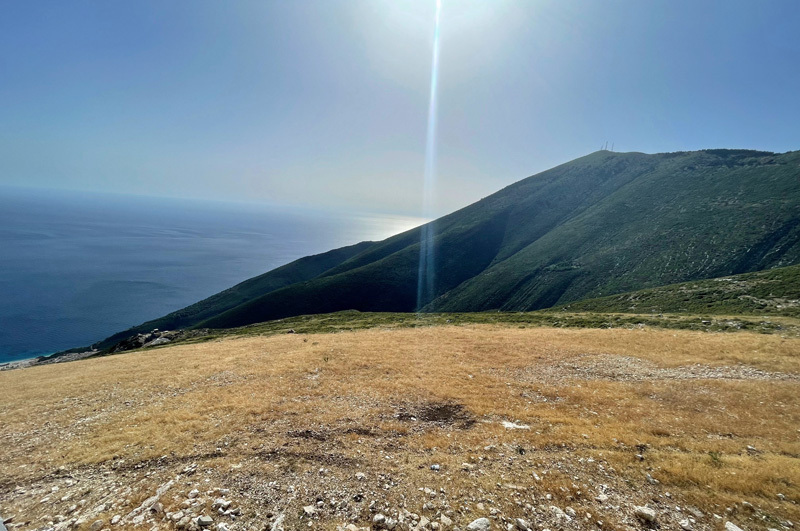 It wasn’t until we were at the top of the pass that we even realized where we were, but the views were so worth the delay and the difficult drive. I call these happy travel accidents. Never would we have planned to spend 8 hours driving what should have been a 3 hour drive, but we’d have missed this spectacularly beautiful part of the Albanian coast. After marveling at the sights, we hopped back in the car to continue our drive to our hotel for the night in northern Albania. 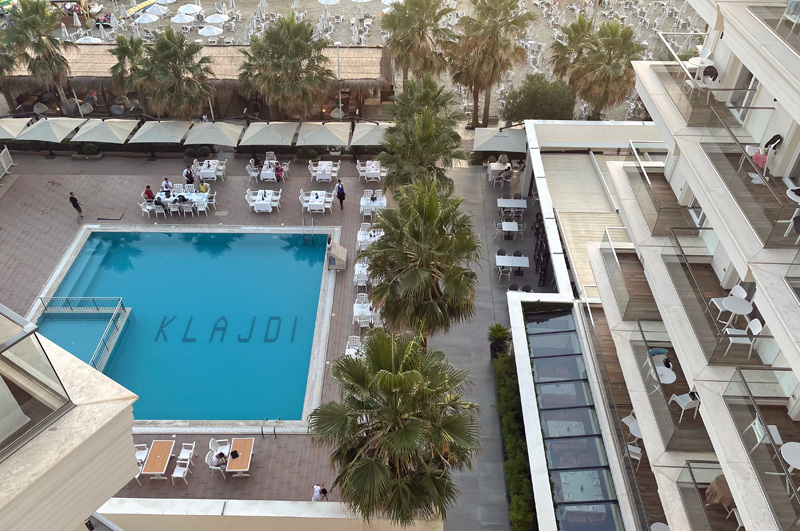 Klajdi Resort and Spa, just south of Durres, Albania, about 75 miles from the border with Montenegro
Because it was the height of summer, it was still light at 8:00 when we arrived, and we quickly checked into our room on the top floor, intent on catching the sunset over the Adriatic. And although the room was large and spacious with great views, the AC wouldn’t function and it was 80 in our room (I sleep at 60 at home). Later we’d learn that the rooftop night club right was next to our room and would blast club dance music until well after 2am making it impossible to sleep even with ear plugs in. 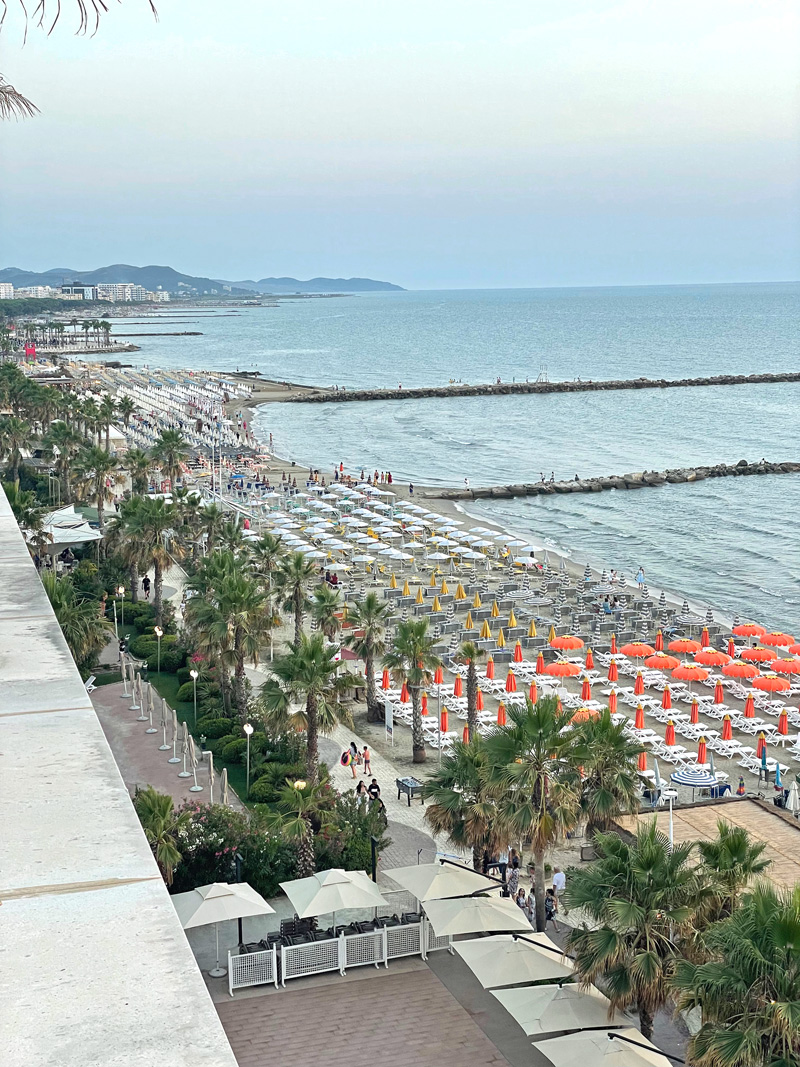 Miles and miles of beach chairs along the Adriatic coast
The other thing we quickly learned was that the resort, as well as every other resort on this beach, was packed full of guests, mostly Eastern Europeans on holiday with their families. The food was mediocre, everyone was smoking, there were kids screaming everywhere, and I had trouble picturing what had looked like a small boutique hotel when I found it online. 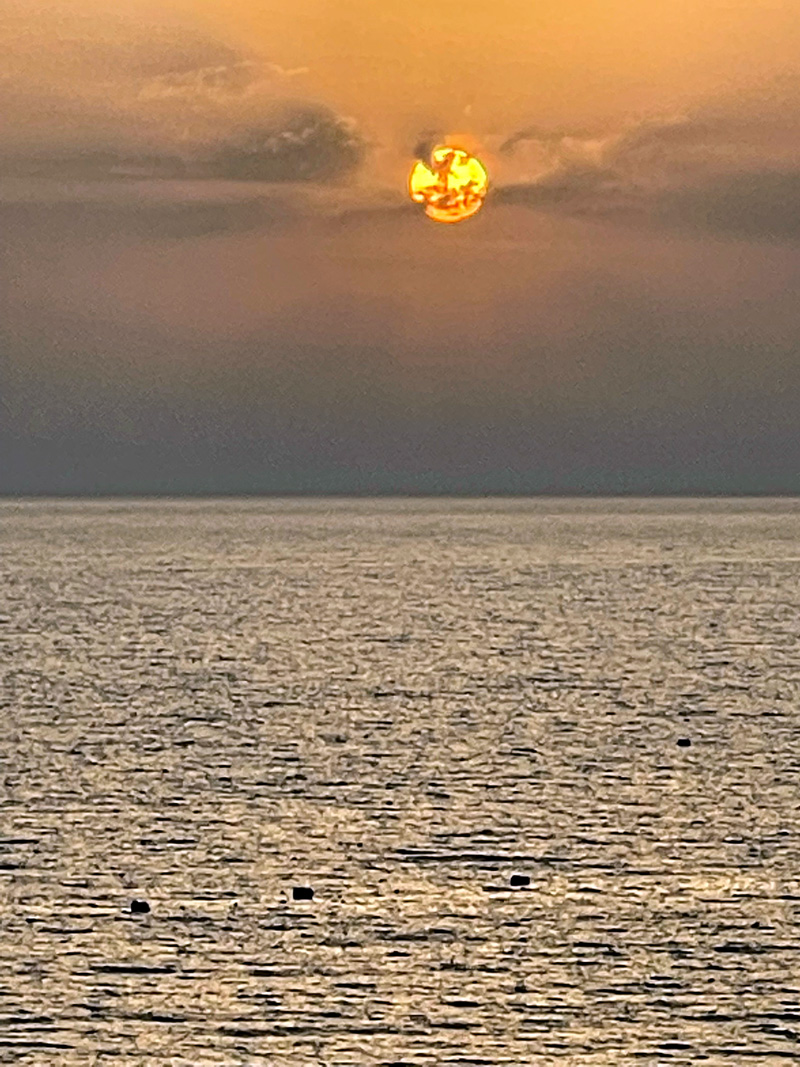 Sunset over the Adriatic
We did watch the sunset, sipping on a cocktail, and we did eat some dinner, but before we went to sleep, I sent an email off to our next hotel in Kotor, Montenegro asking if we could come a day early and skip our second night in Albania. Happily, as soon as I woke up I had a confirmation email from them and we quickly gathered our belongings, hoping to get out of Albania and on to the next town. 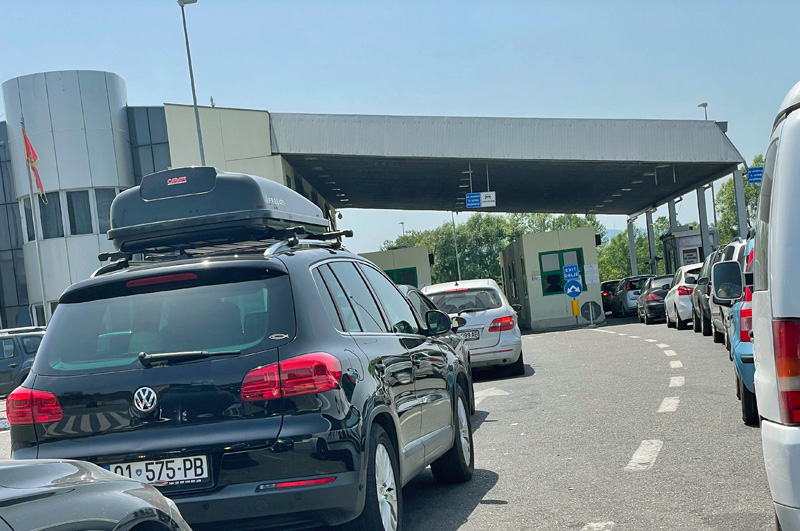 Crossing the border form Albania to Montenegro
After an hour or two we were ready for the border crossing into Montenegro. We had purchased the required pass back in Saranda to make things simpler on our way, and we pulled out all of the documents he had given us to show the guard. I was uneasy while we waited, recalling having been pulled over by the police once in the Czech Republic for not having the correct paperwork. And I couldn’t stop thinking about the car we were driving. Who owned it? Was it safe? Was this legal? Were we inadvertently transporting something? But the guard waved us through and off we went to Kotor.

It wasn’t until we relinquished the car in Dubrovnik that we understood fully just how bizarre this car rental was. The front desk staffs in both Kotor and Dubrovnik shared with us how dangerous Albania is. Although the country split from Yugoslavia along with the other countries in this area, the Albanian Mafia fiercely controls the country, which is actually holding back the progress of Albania. They single handedly control the cocaine trafficking in Europe, and are known for dangerous trafficking of guns and humans along with drugs.

When we brought the car to the offsite car lot where we were told to leave it, the agent there said he had no idea what any of this was about. He didn’t know the person who had rented us the car, but he took the keys. “Thanks for the free car!” he joked as we got in our private car to transfer into Dubrovnik.

Two days later the rental guy from Saranda texted me again asking if we had dropped off the car as they were unable to find it. I responded that we had, as requested, and reflected on how lucky I actually was that we hadn’t given him any credit card information. Out of curiosity, I asked who the car belonged to and how was that person going to get all the way to Dubrovnik to pick it up. His response was “we pay some to do the job and to be fair I don’t know how they get there.” As we drove into Dubrovnik, we couldn’t shake the feeling that we had been used as mules for something.