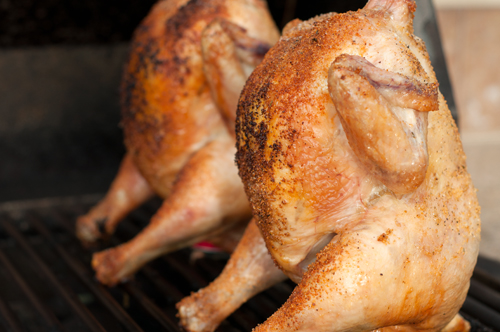 I’m not married to the idea that you have to use homemade chicken stock -I use plenty of boxed or canned when I’m out stock (no pun intended). But I am a bit annoyed by the many chefs on cooking shows (which is all I watch when I exercise) who say they don’t use it either because they don’t have the time or equipment to make it. One such celebrity was making some elaborate dessert that I’m not sure even I would attempt, but confessed she was unable to make chicken stock. Trained at Le Cordon Bleu, but not able to make stock…go figure. For the record, it’s incredibly easy and only requires one pot!

I store leftover chicken carcasses in the freezer in Ziploc bags until I have 2 or 3. To make stock, I simply put the frozen carcasses in a large pot with some carrots, celery, onion and a little salt and peppercorns. Bring to a boil, reduce to simmer, and let it go for 2-4 hours. Strain and cool overnight in the refrigerator. In the morning, lift off the congealed fat layer on top then store the stock in the freezer in some covered plastic containers (I save old butter containers just for this purpose). If you want to get fancy, freeze some in ice cube trays or muffin tins so you have smaller amounts to pop out for cooking.

Admit it, that doesn’t sound so hard does it? Sure you can open up a can or box, but you won’t believe how great your own homemade stock is going to taste, and you will have the satisfaction of knowing you left nothing to waste on those chickens!