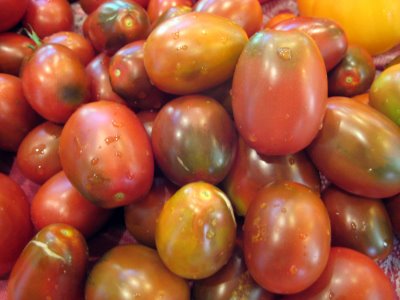 I was tickled to find an article in this morning’s food section of the Denver Post paper about oven drying tomatoes, having spent the weekend doing just that. The author points to the price of commercially purchased dried tomatoes as motivation – I say it’s all about the taste. Some store-bought sun-dried tomatoes are so dry and chewy they don’t seem to have much of that acidic tang that’s appealing about dried tomatoes. 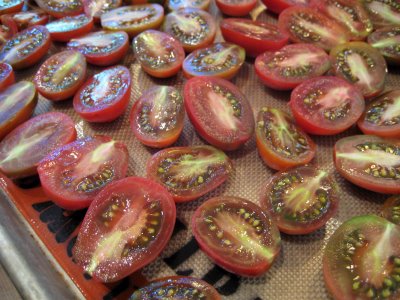 I started with a batch of small heirloom plum tomatoes (grown by a Korean farming couple near Ft. Lupton and purchased at Sunday’s Pearl Street Farmers’ Market) which I sliced in half and laid cut side up on a baking sheet lined with a silicone liner. If you don’t have a Silpat liner, just use a piece of foil. I don’t bother with any oil or seasonings when drying my tomatoes, preferring to add seasonings to whatever dish I end up using them in.

My gas oven has a very low 150 degree setting, so I placed the tomatoes in the oven and let them cook until they were very dry. Although the Post author suggests they would be ready in 5 hours, mine took 24 hours at that temp to reach a desired level of dryness. 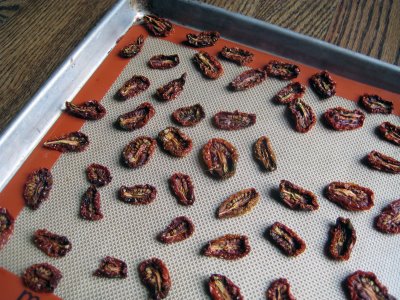 If you get them totally dried out, you can store them in a jar on the shelf of your pantry, but if they have any moisture at all left in them (and I like mine to have a little bit left) you are better to freeze them. I put them all in a small container and popped them in the freezer. It’s surprising how small they get, so I’ll probably do a couple more batches this year. I love dried tomatoes in pasta dishes – although this calls for shrimp, you can make the recipe with diced chicken as well.

Heat a large stockpot of water to boiling over high heat. Add penne pasta and sea salt and cook until just barely al dente. While pasta is cooking, heat a large saute pan over medium high heat and add the olive oil. When oil is hot, add onion and cook until slightly softened, about 2 minutes. Add garlic and cook for an additional minute. Sprinkle shrimp lightly with salt and pepper, then add shrimp to pan and cook, allowing them to sear on one side for 30 seconds. Deglaze pan with the wine, then add tomatoes, dried tomatoes, chicken stock and heavy cream. Bring to a boil, then reduce heat and simmer until sauce thickens slightly, about 2 minutes. Drain pasta, reserving some of the pasta water, and add cooked pasta to the sauce; toss well to combine, adding some pasta water to loosen sauce if necessary. Remove from heat, toss with fresh parsley and salt and pepper to taste.