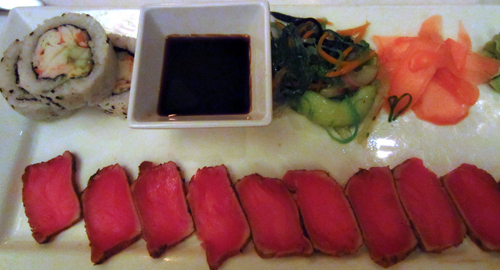 It’s been awhile since I posted about any restaurants I’ve visited here in the Denver area. In fact, if you don’t count a link to my daughter’s post about Frasca for her graduation, it’s been since last August that I posted about a Front Range restaurant. Well, let me remedy that right now. 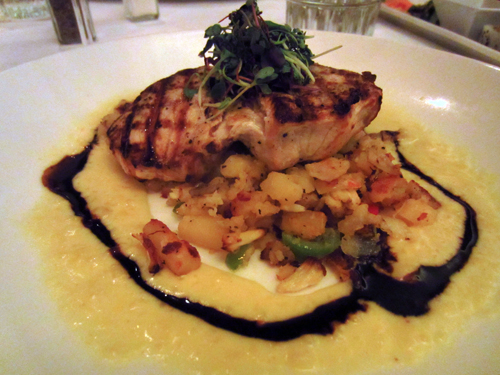 First up is McCormick & Schmick’s in the DTC. I’m not usually a fan of large corporate chain restaurants like this, preferring instead the local farm to table innovative chefs and restauranteurs we seem to be growing in Colorado. But if you want really good seafood, and a selection of it, then you need to go to a place like this in landlocked Colorado. I had the ahi tuna – a simple preparation with traditional sushi condiments and a surprise of a little California roll slice to go with it. Great for eating light. My daughter, at this farewell dinner for her before she left for Hawaii, decided to break her cleanse diet in a big way – fried oysters for an appetizer followed by this rich swordfish over a bed of crab and potato hash with corn bisque as a sauce. I think my husband had a steak, which I must not have deemed worth photographing since we were in a seafood restaurant, but it’s good to know meat eaters can be happy here too. 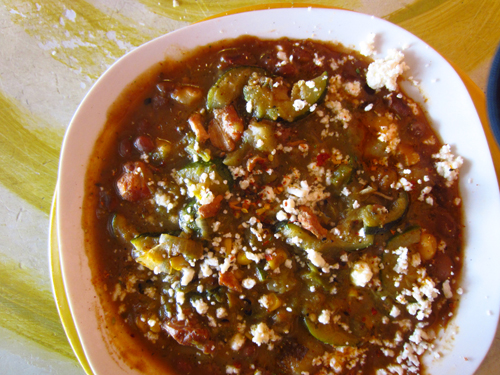 Awhile back I met a fellow foodie to discuss the business she was launching, and she suggested Julia Blackbird’s in the Highlands area. Always loving to try something new, I was game, and I was thrilled with the food. This cafe touts New Mexican cuisine, which is a bit different than traditional Mexican. I had the Navajo Stew, which they describe as “everything holy in New Mexico: beans, posole, squash, corn and potatoes topped with cheese & chile”. I call it the perfect blend of a chile, posole and vegetable stew. 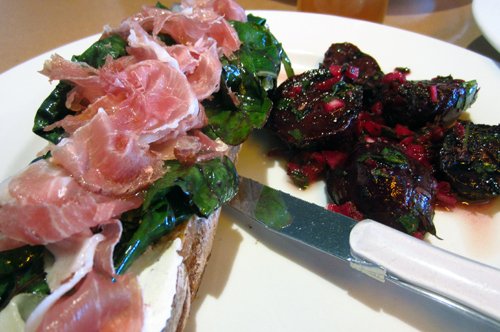 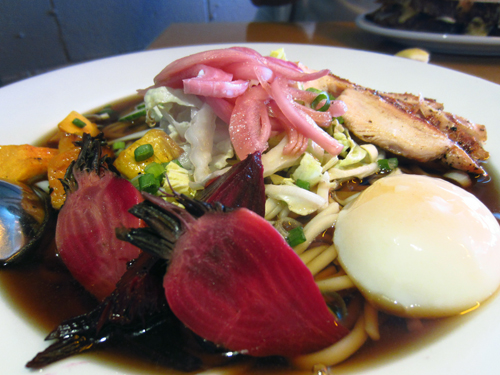 And finally, today I made it to Fuel Cafe with a couple of friends to celebrate a birthday for lunch. I don’t consider myself tied to anyone’s “top” list, but the fact of the matter is that anything that ends up on 5280s Top 25 Restaurants list is probably worth trying out. As it turns out, not only is Fuel worth visiting, it’s worth falling in love with. We found ourselves sitting in this odd semi-industrial space in north Denver wondering how we could get them to open up another one closer to where we live in the southern part of Denver proper. I had a tartine, a simple open-faced sandwich with ricotta, beet greens and prosciutto, served with a side of the best roasted beets I’ve had in ages. The birthday girl had the Udon Noodle Bowl – it’s brought to the table with all of the ingredients in a large bowl – cucumber, cabbage, pickled onion, burdock, beets, slow poached egg, and your choice of chicken or tofu – then dashi broth is poured over the whole thing tableside. Gorgeous presentation, and a rich and warming meal for a cold day like today. And a little tip, we started the meal off by sharing an order of the sweet potato chips, made in house and served with what seemed like their housemade version of a ranch dressing. Yum. With the tagline of “organic seasonal local sustainable”, I’m sure I’ll be back.