Maybe it was the rush to buy Colorado produce at the Tamarac Farmers’ Market (today’s the last day for the year) or the fact that the coho salmon was both in season and fresh at Whole Foods – after weeks of traveling and eating out, something is pushing me to cook again. 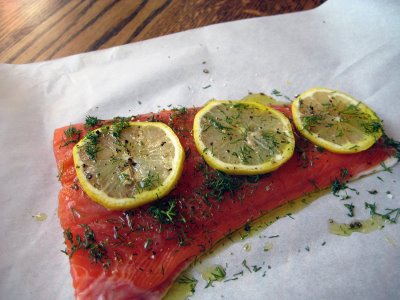 I picked up some of the coho salmon and laid it on a piece of parchment paper, then sprinkled it with chopped fresh dill from the farmers’ market, laid a few lemon slices on top, sprinkled on some sea salt and freshly cracked pepper, then drizzled it with some high quality extra virgin olive oil I purchased in Italy. 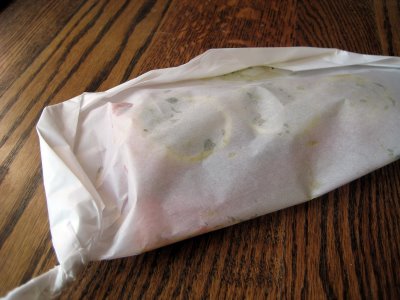 Next I neatly folded the edges of the parchment paper, pressing securely with each fold and twisting the end a bit to hold it all together. I’ll bake this at 350 degrees F for about 15-20 minutes, or until the fish reaches the desired level of doneness. Baking en papillote like this is a great technique for retaining moisture in drier varieties of fish. 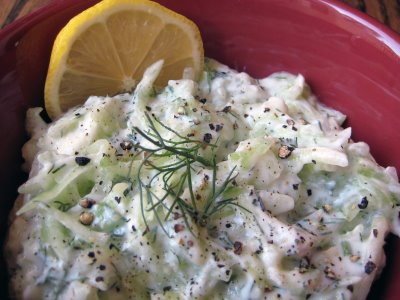 I’m going to serve the salmon with my version of a simple raita type of dish. I peeled, seeded and shredded one large cucumber, let some of the water drain out on paper towels, then mixed it with nonfat plain yogurt, lemon juice, minced dill, salt and pepper. For traditional Indian raitas use mint or cilantro, and often are seasoned with spices like coriander, cumin, chili powder, or mustard seed. Throw in what you like, and just use similar seasonings on the salmon, and you have a healthy, easy weeknight dinner!