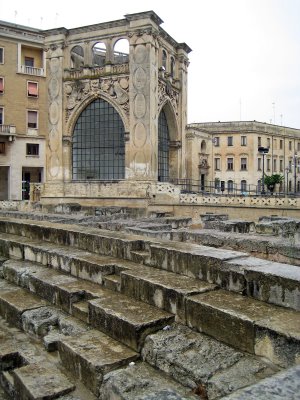 On the day of our schedule tour of Lecce, purtroppo fa brutto oggi (loosely translated as unfortunately the weather stinks today). With temperatures in the 40s or 50s and drizzle or rain all morning, we tentatively struck out with Timothy our tour guide to view everything from ancient Roman ruins to baroque buildings – but not before downing an espresso from the bar! 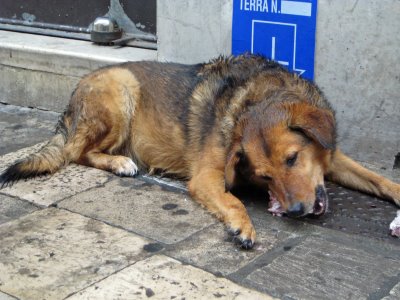 Even Nina, one of the stray dogs in town who is overfed an certainly loved by all, was wet – but the bones donated from the butcher helped her get over it quickly. We ended our tour early due to the downpour and made our way into Rustica near the bar for a pizza lunch – margherita, quattro formaggi, e mozzarella di bufala con cippolini hit the spot, along with a glass of hosue white wine. Maybe it was the wine, maybe the rain, or maybe just too many days of running hard, but I slept a dead sleep for two hours in the afternoon before dragging myself up to shop a bit. 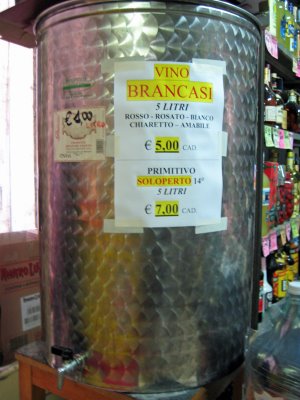 We met Silvestro at Nocco to learn about the changing wine trade in Lecce. The large vat above is typical of old school wine shops selling cheap jug wine in large glass containers brought in by the locals. What’s not typical is the specialty section in the back of Nocco featuring all sorts of special bottles, including some trendy boutique winemakers of the Salentine peninsula. After the wine shop we continued on to the market to buy the ingredients for homemade sausage and the other dishes for dinner. 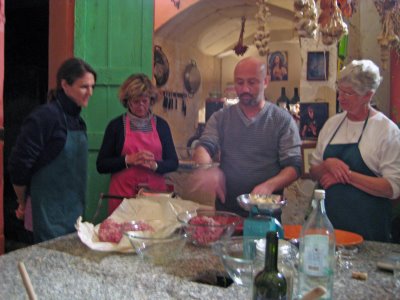 After mixing together the ingredients, the group took turns cranking the sausage mixture into the casings, and off-color jokes ruled, causing even Giuseppe to blush. (He vented under his breath that he always hates the night of making sausages!) 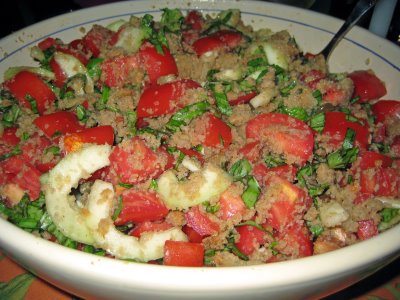 Our first course was a tomato and cucumber salad made with frise di orzo, a very hard barley flour biscuit that is soaked in water, squeezed dry and crumbled. It has the aroma and taste of Grape Nuts cereal when wet and heated, and I plan to try the recipe with them to see if it’s close. 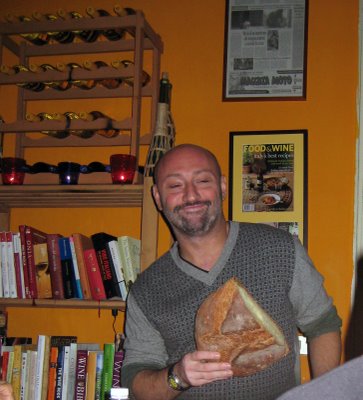 Silvestro gave us one of his rare smiles for photos as he held up the remains of the bread from the week, which we enjoyed with a simple arugula salad… 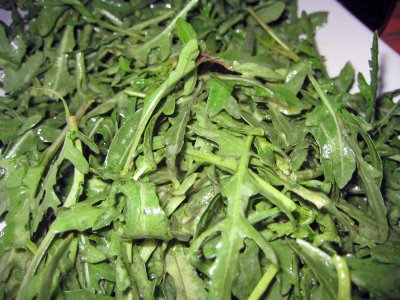 …followed by the homemade sausages and roasted peppers, which were killer good. 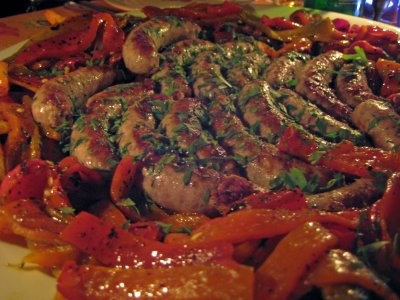 We drank LOTS of Primitivo out of the carafes placed on the table which accompanied our boisterous conversation until 1:30 in the morning. Thank goodness Silvestro lets us sleep in each day!