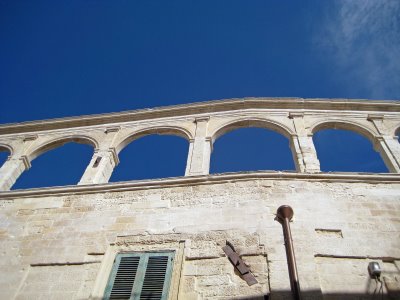 We awoke to a gloriously sunny day in Lecce on Tuesday and met up as usual at the bar for caffe. I had stayed up until 5am finishing a book and I was exhausted when the alarm went off at 9am.By this point in the trip, I couldn’t imagine starting my day without that morning jolt, or the friendly banter (in Italian, of course) with Antonio, but even after an espresso followed by a Coca Cola Light, I was still dragging. 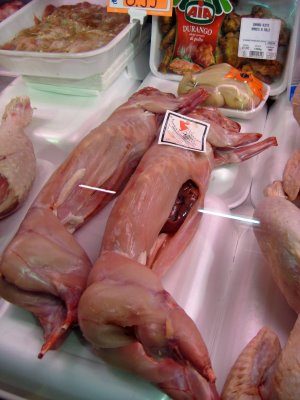 We made our way to the market, and today’s lesson focused on the butcher, who looks remarkably like Nicholas Cage in Moonstruck. We saw whole rabbits, chickens, small lambs, and an entire truck shipment of horse from which I’ll spare you the photos. 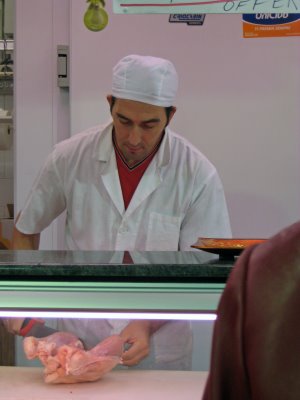 Groceries in hand, we made our way back to the school to prepare the day’s pasta – latria for dinner and orecchiette, the famous pasta shape of the Salentine region, for lunch. 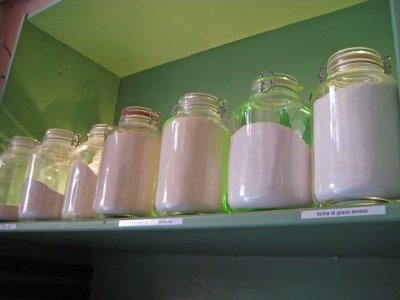 First to the pantry shelf for the semolina and barley flour, and then a difficult 30 minutes of trying to make the orecchiette, lamb’s ear shaped pasta. You start with a rope of the dough, cut off small nuggets, and drag a knife across them to flatten them out and give them texture. The last step is to invert them like a little shower cap on your thumb. Sounds easy…it’s not! 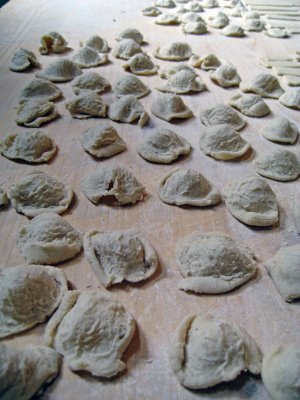 After the pasta was ready and drying, we got on to making the rest of our lunch. Florine and Silvestro worked side by side cleaning greens… 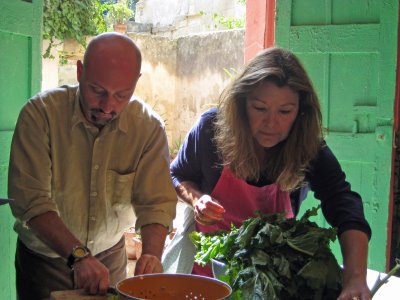 …while I eyed the rest of the pantry. I wasn’t the only one who returned home determined to get rid of the odd sized bags and boxes and to store food in sealed glass jars. 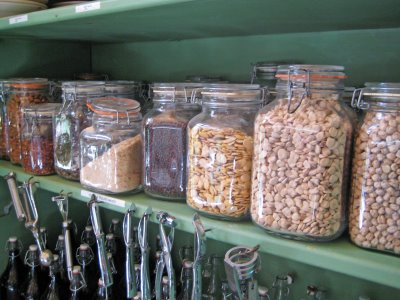 Now if I can only find a source for my own house wine too! 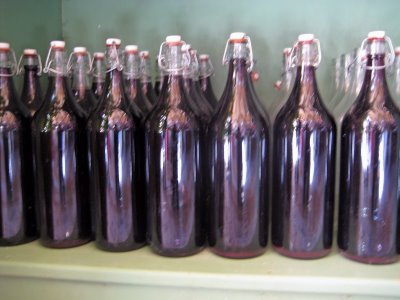 Back at the work table, Stephanie and I scarified our manicures (our fingers remained stained the entire trip) to pit these tiny black olives for the roast chicken that would be topped with olives, herbs, and lemon.

There might not be a better first course in the world than classic Italian cheeses and meats. While I generally know what we had (mozzarella, prosciutto, etc.) the real standout was the burata, a creamy cheese made by scooping up all of the extra pieces of fresh mozzarella cheese curd and combining them with heavy cream, and wrapping the whole thing in more mozzarella. 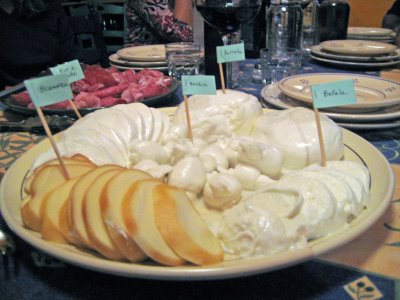 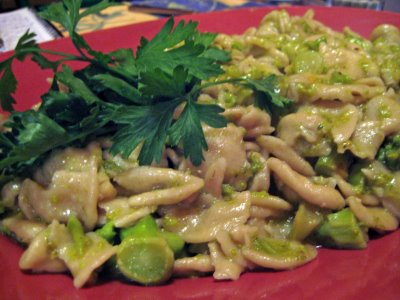 By the time the pasta dish (orecchiette with cabbage and pancetta sauce) was served, we were already getting full, but managed to make room for the chicken. 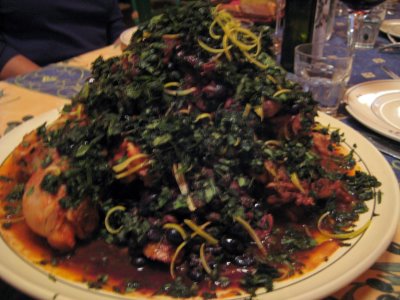 Needless, to say, after partying big the night before, and my lack of sleep, our lunch time conversation was not nearly as spirited. I headed back to the B&B for a 1 hour nap, then forced myself to get up and talk a 1 hour walk around with Janet in the city park behind Basilica Santa Croce. It actually felt great to get some exercise after so much food and wine. We shopped a bit on the way home, then made our way back to school for our dinner lesson. 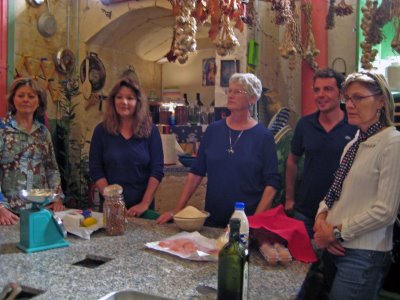 Francesco, shown between Janet and Dixie above, joined us for the evening, and we started out with an olive oil tasting. After ten years of traveling the world for school, work (lawyer), and volunteerism (he raised $10K selling his photos of Africa to build an orphanage in Africa), he returned to his native Lecce to join in the business of producing extra virgin olive oil. His sister runs the farming and production an Francesco runs the commercial (i.e. sales) end of things.
Francesco is passionate about growing olives native to the region, like his 5-drop award winning Ogliarola 2007. He recently had the good fortune of making contact with Giorgio Deluca (of Dean and Deluca) and hopes to export his oil to the US.
Some new facts we learned about EVOO: the bottles carry a two year expiration not necessarily because they will turn rancid in that time, but because the acidity can rise above the required .8%; EVOO flavors lesson with age, so buy in small quantities and use lavishly; EVOO can be made from a single varietal olive or blended, just like wine; color is irrelevant in assessing quality – instead look for sweet (tip of the tongue), bitter (back of the tongue), or spicy (catches in your throat) indicators. 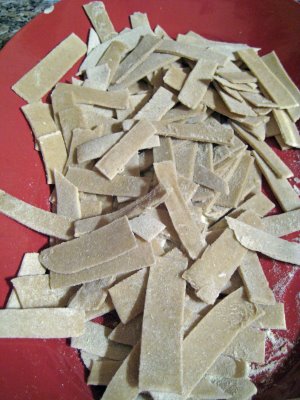 We used the latria pasta made earlier in the day to make a chickpea soup, hearty peasant food where part of the pasta is deep-fried to fool the eater into thinking they are eating meat. The rest of the pasta is cooked in the thick stock and the dish is finished with loads of fresh parsley and olive oil. 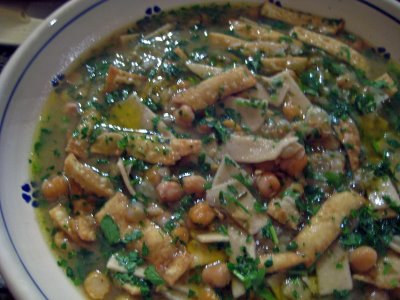 We went on to make one of the best meatloaves I’ve ever had. I don’t know if it was the combination of meats and seasonings that went into the loaf itself, or the surprise of spicy sopressata salami and cheese in the center, but it was killer served with oven roasted potatoes. 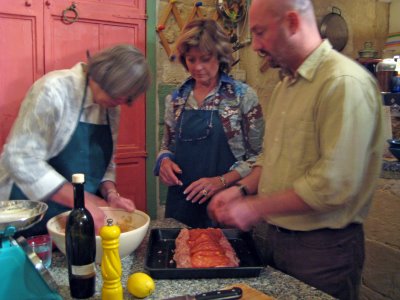 We finished the meal off with an Italian confection called cupeta, or almond brittle. For me, all the food and Primitivo wine with dinner did me in and I was unable to eat even a bite. 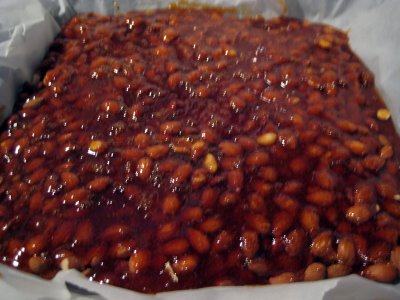 One of the greatest aspects of The Awaiting Table is the constant influx of local visitors to the dinner table. Tonight’s table included our group, Silvestro, Carolyn, Giuseppe, Francesco and two young women from Lecce who are friends of the staff. This type of meal allows you to experience Italy like a local, to learn the real culture of a region, and, for me, to practice speaking Italian without fear of screwing up!